Lela Roberts runs the 100-meter hurdles at the CIF Prelims. 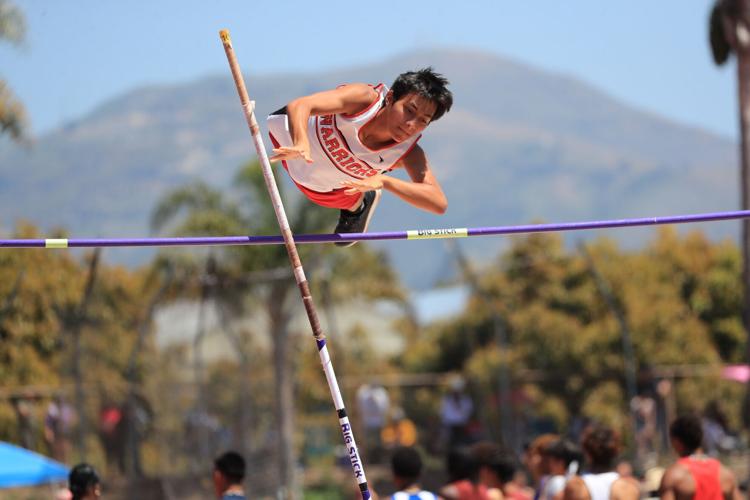 Lela Roberts runs the 100-meter hurdles at the CIF Prelims.

The Carpinteria boys tennis team has had a strong year, led by Coach Charles Bryant and brothers Austin and Max Stone, but after losing a tight match against defending CIF champions Foothill Tech, the Warriors’ 2022 campaign has come to an end.

The elder Stone brother, star senior Austin, closed out his storied career with yet another 3-0 performance in singles play. In his four years as a Warrior, Austin has made a habit of sweeping his singles sets.

“We will lose the strongest player I have had here at Carpinteria High School in the past eleven years in Austin Stone,” said Coach Bryant. “It was almost a done deal to get three wins right off the bat. That will be hard to replace that efficiency.”

His younger brother Max defeated Foothill Tech’s second-best singles player 2-1. Doubles duo Connor Gralewski and Matthew Endow swept their sets 3-0, but three close losses in doubles play proved too much for the Warriors to overcome and Foothill Tech advanced with a 10-8 win.

“It is hard when you play close enough to win but just cannot get that last little bump to put you in the win column,” Bryant said. He added that the season was “tremendously successful” with some big non-league wins and a Citrus Coast League championship.

He also reminisced on the careers of the team’s three other seniors, Ben Persoon, Zaiden Juarez and Ian Thomas. Persoon and Juarez have been starters for three years, he said, and they have improved vastly each season.

“Our two year captain, Ian Thomas, did an amazing job leading this team which was not easy at times,” Bryan said. “But his cool demeanor and competitiveness rubbed off on his teammates and took them to the next level. These four seniors will be greatly missed and I know our younger players are grateful for the impact that was made by them.”

Carpinteria finishes the season 14-6 overall and 8-1 in the Citrus Coast League.

Carpinteria hosted the CIF Track and Field Prelims, where senior Mateo Handall secured a trip to the CIF Finals with a new personal record of 51.02 seconds in the 400 meters.

Handall’s time was good enough for second in his heat, and eighth overall, making him the only Warrior to qualify for the finals.

Carpinteria’s Ben Smith earned a spot as the second alternate in the boys’ pole vault final, with a new personal record of 10’.

The Finals will be held May 14 at Moorpark High School.

After the Warriors boys took home the Division 4 CIF title last year, both the boys and girls teams were moved up to compete in Division 3 this postseason. The program has continued to improve this year, and Carpinteria was able to send a team of 11 swimmers to the CIF Finals at Marguerite Aquatic Center in Mission Viejo.

Erin Otsuki qualified for the finals, taking seventh place in the 50-meter freestyle and 100-meter backstroke.

Erin Otsuki joined Piper Clayton, Lilli Nemetz and Guilia Piccoletti for the 4x100 and 200 medley relays, with the girls qualifying for the finals and setting school records in both races.

The boys relay team of Lamberti, Asher Smith, Justin Main and Jackson Melton repeated the same feat as the girls in the 4x100 and 200 medley relay, breaking the previous school record and qualifying in the 100-meter relay final.

The eight qualifying members of the team returned on Saturday for the finals, ending their seasons on a high note, with the girls finishing 10th out of 48 schools and the boys finishing 18th overall.

Coach Jon Otsuki praised the team for competing at a higher level against bigger schools. “Although it was a humbling experience as many were unable to qualify for finals in Thursday’s preliminaries, they responded exceptionally well at finals. “

Otsuki’s daughter, Erin, continued to impress in her first year of organized swimming competition by earning eighth place in both the 50-meter freestyle and 100-meter backstroke.

“This was her first ever ‘big’,meet in her young swimming career,” Coach Otsuki said. “To finish in the top eight is an exceptional feat.”

“This was a great experience for everyone who was on the CIF travel team,” Coach Jon Otsuki said. “There was the reality check that moving up a division is a big challenge and getting to the podium will not come easily. There were friendships and memories that will be cherished for a lifetime. We had a great many successes in Carpinteria aquatics this year and we look forward to many more to come.”

Cate’s winning season came to a dramatic end in the first round of the CIF playoffs, with the visiting Burroughs Bears claiming the victory in a 9-9 tie that was decided by games won.

“The match really could not have been any closer,” Cate Coach Jason Saltoun-Ebin said. Both teams were locked at 3-3, then 6-6 and finally 9-9. Burroughs took the win by a margin of four games.

In singles junior Jengus Ercil, junior Will Vanica and sophomore Ethan Bloom all picked up wins. Bloom and Vanica will have the opportunity to compete in the CIF individual doubles tournament at Carpinteria High on May 19.

Carpinteria Community Pool has announced that Anthony Pozos is the aquatics program’s Standout Staff Member for the month of May. Pozos, who is a lifeguard, enjoys working out, fishing and riding his bike.

Community Pool staff said Pozos “commits himself 100% to every task and always double checks his efforts to meet his own high standards. He prides himself on staying focused on school despite the challenges presented by the Covid-19 pandemic and work.”