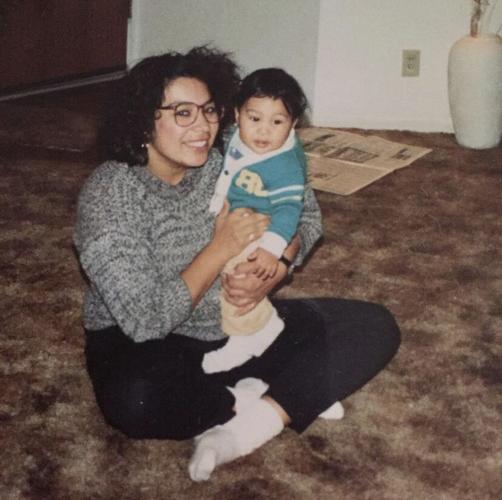 The author, right, with his mother, Claudia Renteria. 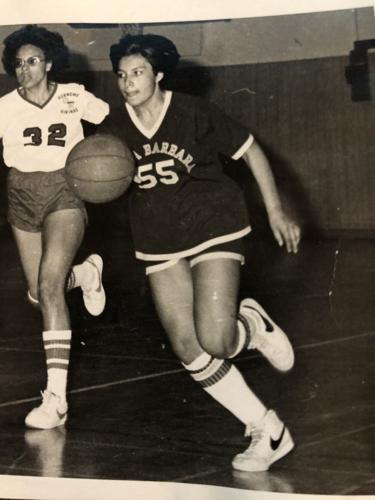 The author’s mother Claudia Renteria, right, was on the Santa Barbara High School basketball team in the 1980s.

The author, right, with his mother, Claudia Renteria.

The author’s mother Claudia Renteria, right, was on the Santa Barbara High School basketball team in the 1980s.

This is my favorite time of the year – sports wise – as the college basketball season ramps up. Teams are deep in their conference seasons, playing rivalry games and jockeying for a spot in the holiest of championship (in my mind at least) tournaments that exists: the NCAA National Championship, or as its better known, March Madness.

You see, I’ve always loved watching sports, especially basketball, for as long as I can remember. Besides the soothing sounds of basketball shoes squeak-squeaking across the hardwood, whistles blowing, nets swishing, backboards clanking and cheers from the crowd, there is something deeply comforting about watching the game itself; it’s always ten players flowing back and forth for 40 minutes, where you always know what’s happening (get the ball in the hoop) but never know what’s happening next.

In fact, you could say I’ve been watching college hoops since before I can remember – it’s in my blood, passed down from my mother, Claudia.

I was born early in the morning on St. Patrick’s Day, the opening day of the annual tournament, and as my mom tells it, she spent that day in the hospital bed watching basketball with me bundled up in a mess of blankets in her arms.

My mom was an athlete long before I came into this world. In the early ‘80s, she was captain on the Santa Barbara High School Basketball team, with a sweet jump shot that is still deadly accurate to this day (there is debate in my family over who exactly is the best shooter in the family, but I dare anybody to challenge my mom at Super Shot at the arcade).

Although I was her second child, my older sister never really took to sports, and my mom saw in me a chance to share her love of sports. There in the hospital bed, she was enjoying the moment, watching the first-round tournament action on the small television in the corner of the room with her newborn son. There were 16 games on the slate that day, but she remembers watching my favorite team, the North Carolina Tar Heels (who were favorites that year) when a nurse, thinking she was helping my mother, came into the room and began changing the channel.

“Excuse me, what are you doing?” my mother asked.

When the nurse explained that she thought my mom would rather watch something else (maybe a soap opera perhaps?) my mom fired back: “No. I’m watching the game with my son.”

And that’s how it’s been ever since. On Saturdays in the fall, we watched football. Notre Dame, to be specific. On Thanksgiving and Christmas, after the family was full of food, my mom would round up the cousins and head to the park for a game of pickup. Whenever there was a big game on TV, we watched together.

I know now that she struggled, as a single mother of two, trying to make it work without her children noticing any problems. It’s true, I didn’t realize what we didn’t have. I didn’t know that we were without. I was wrapped up in being a kid, being happy with what we did have and playing and watching sports. Baseball season, football season, basketball season and then back around again. Looking back, it wasn’t even the sports themselves that I loved so much. I got to spend time with my mother, and I will always cherish that.

Earlier this month, my mom called me up on a Sunday morning. It was 10 o’clock on New Year’s Day, and I was still in my pajamas, lounging and checking the day’s slate of games. “The Rams are playing the Chargers in LA,” she said, which I already knew because I had just set my TV to record the game.

Of course, I went. It was our first time at a professional game together – there was no way we could afford an unplanned trip to an NFL game growing up – and the trip with just me and my mom was a reminder of how lucky I was to have a cool mom, a sports mom, in my life.

On the way there and back, we talked. About growing up, about playing little league, about my cousins who were once toddlers now making their way through high school and college sports. About how my mom started a career long ago, not knowing what would come of it, and how now she is proud to be able to take us to do the things she always wanted to do when we were younger, like an impromptu trip to an NFL game, or a daytrip on the train to see the sights.

Now, we have a growing list of sports meccas we hope to see together in person. The top of my list: the NCAA Final Four. Mom, do you want to go?

Ryan P. Cruz is the sports editor for Coastal View News. This is the second installment of a monthly column where he will explore local sports, sports history, and what’s in store for the future of Carpinteria sports. Have an idea, tip, or sports story? Email him at sports@costalview.com.