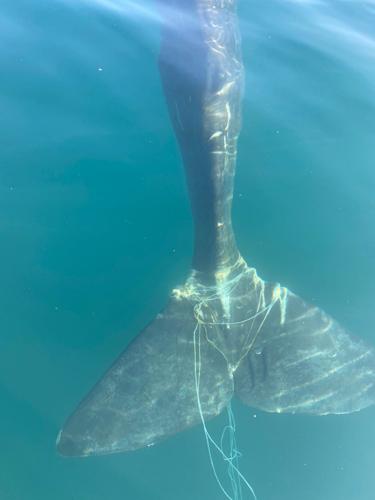 The author spotted an entangled sperm whale in Summer 2020. 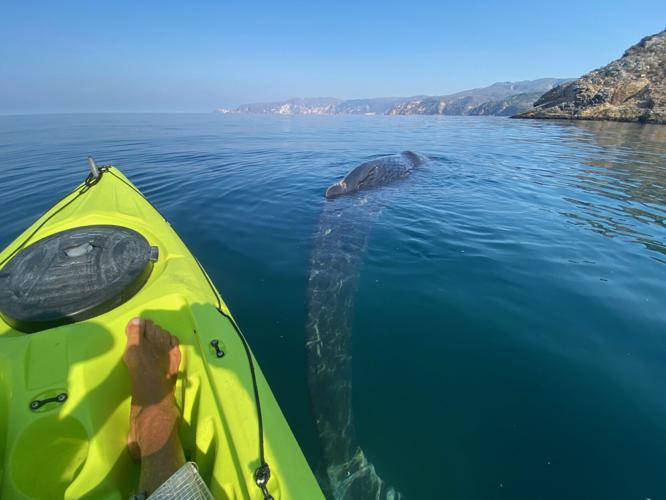 The young sperm whale’s tail was bound in fishing line, the author said. 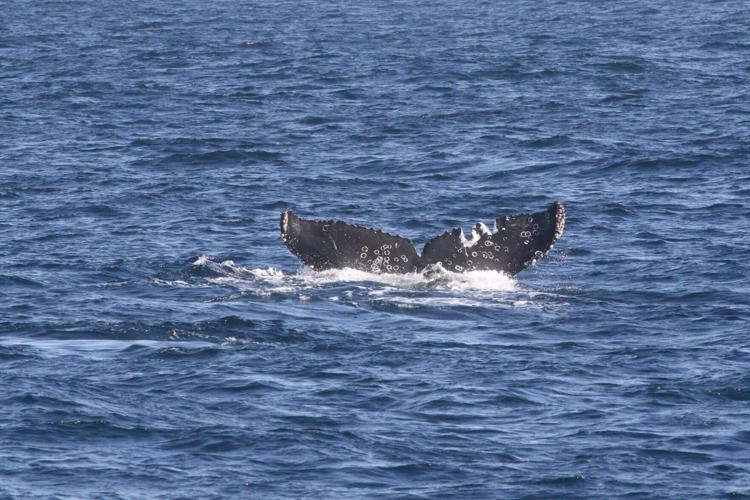 Amiga the humpback whale shows off her tail fluke, revealing the effects of entanglement.

The author spotted an entangled sperm whale in Summer 2020.

The young sperm whale’s tail was bound in fishing line, the author said.

Amiga the humpback whale shows off her tail fluke, revealing the effects of entanglement.

It probably didn’t have a chance anyway, but I was more than willing to give it a go.

A young sperm whale’s tail was bound tightly in fishing line. It was exhausted and struggling. At roughly 15 feet long, it was also without its mother. Life was cruel to this incredible marine mammal.

I came upon it in late Summer 2020 during the Covid-19 pandemic, while leading a kayak tour northwest of Prisoners Harbor, on Santa Cruz Island. Some of the folks on my trip thought it to be a humpback whale, but something was different about this young whale.

Sperm whales are the largest toothed whales in the world, and their spouts sag off to the left. This gives them an odd look, especially when exhaling. I could also tell this sperm whale was laboring. Mostly it rested at the surface or just beneath it, but its badly tangled tail sagged below.

It was a balmy day off the northside of the largest, most biodiverse isle off the California Coast. Water visibility was excellent that day, and while paddling up alongside that tuckered-out sperm whale, I could easily see all the monofilament fishing line wrapped around its tail. I was also looking into the eye of the sperm whale. I was hoping it would trust me.

After watching it struggle to exhale, I took off my personal flotation device (pfd), pulled out my knife and slid out of my kayak into the 65-degree water. I was able grab the line twice and tried cutting it off, but the sperm whale kicked with its tail, moving a short distance away from me each time.

Even if I had been successful removing the line, this young sperm whale desperately needed its mother and the rest of its pod for survival. The next day a whale disentanglement team attempted to rescue the beleaguered marine mammal, but they didn’t have any luck either.

Such is the life of whales these days. Some species were hunted to extinction for their oil. Others like humpback whales have steadily recovered, their populations on the upswing. However, being the most animated of the whales, means there’s going to be more possibilities with ship strikes and entanglement. Unfortunately, that’s the way of things on the open ocean.

Recently, my girlfriend Holly and I caught a whale watching boat out of Monterey Bay the day before Thanksgiving. On the southerly fringe of the bay several miles offshore, we came across a playful humpback whale, our first large cetacean of the four-hour trip.

Our first good look at this active humpback was a full breach with half a twist. She is known as Amiga or CRC-18116. She’s a well-known baleen whale on happywhale.com, a website devoted to the documentation of whales with a good portion of its content relying on citizen science. People submit their photos to Happy Whale and those images are gleaned by experts for unique markings in the tail flukes of humpbacks. With enough sightings and photographs of individual whales, identification becomes more streamlined.

As the five-year-old humpback spouted and frolicked in Monterey Bay, she gently rolled in a raft of giant bladder kelp. We also noticed she possessed some unusual etchings and scarring on her tail fluke. Amiga was gratefully a survivor of entanglement, fishing line wreaking havoc on marine mammals around the globe.

On the left side of her tail fluke were circular-shaped cuts out of her tail fluke and scarring from entanglement wrapping around the base of her tail. There’s no telling how she disentangled herself, but watching her play in the floating kelp raft, it was easy to see why humpback whales become entangled.

For roughly 20 minutes we watched Amiga entertaining the passengers of the boat we were on and several other whale watching vessels in the vicinity. It was evident how much she enjoyed a teeming Monterey Bay, those deep underwater trenches and canyons providing pelagic sustenance for the largest creatures on the planet.