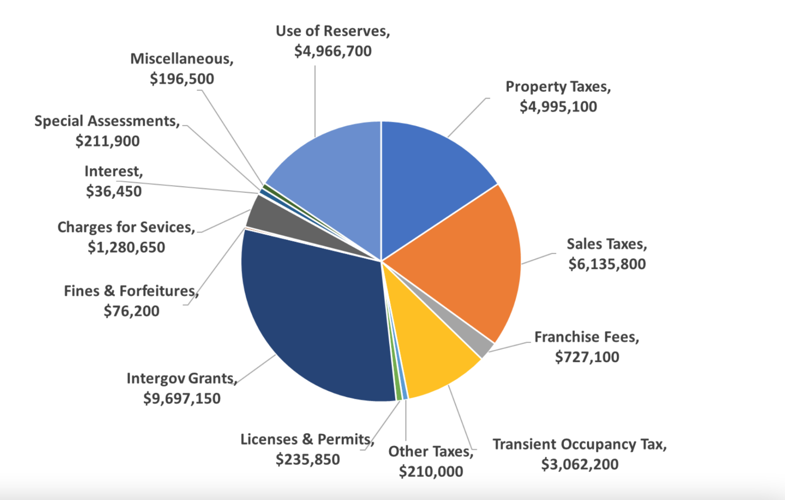 The city of Carpinteria’s projected sources of funds for its 2022-2023 budget, pictured, show the majority of funds come from the city’s property taxes, sales taxes and grants. 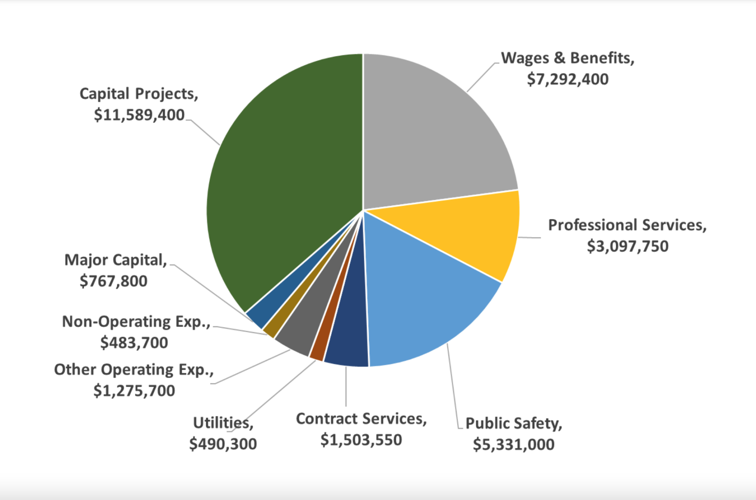 Pictured is how the city is projected to use its funds for the 2022-2023 fiscal year.

The city of Carpinteria’s projected sources of funds for its 2022-2023 budget, pictured, show the majority of funds come from the city’s property taxes, sales taxes and grants.

Pictured is how the city is projected to use its funds for the 2022-2023 fiscal year.

Administrative Services Director Licette Maldondo said the city has three major revenue sources: the transient occupancy sale, sales tax and property tax. Property tax will increase, the sale tax will see a slight decrease, and the transient tax will not change, according to Maldonado.

The budget also is created as though the city is fully staffed, although the city currently has some vacant positions. It is influenced by the city’s annual work plan meeting, held this year in January 2022.

Major projects include pavement maintenance, the Rincon trail, the Carpinteria Skatepark and the East Via Real storm water drain project.

Although big ticket budget items such as the Carpinteria Skatepark were initially slotted for last year’s budget, the skatepark will now be included in the upcoming year’s budget due to scheduling delays, city staff said. Two or three other capital projects also fall under this category.

City staff will go over the budget in more detail at a special city meeting, scheduled for Thursday, June 23, at 3 p.m. The council will either approve the 2022-2023 fiscal budget at the June 23 meeting, or at its regularly scheduled June 27, 5:30 p.m. meeting.

“I want to thank the community for helping us with Measure X, we wouldn’t be where we are without Measure X… it’s a blessing,” Councilmember Gregg Carty said.

View the full budget at carpinteriaca.gov, under the city’s Hot Topics.

A UC Santa Barbara graduate, Asst. CVN Editor Evelyn Spence is going on her fifth year reporting on hot-button issues in Santa Barbara County. She is passionate about covering local, city and school board issues. Send tips to evelyn@coastalview.com.