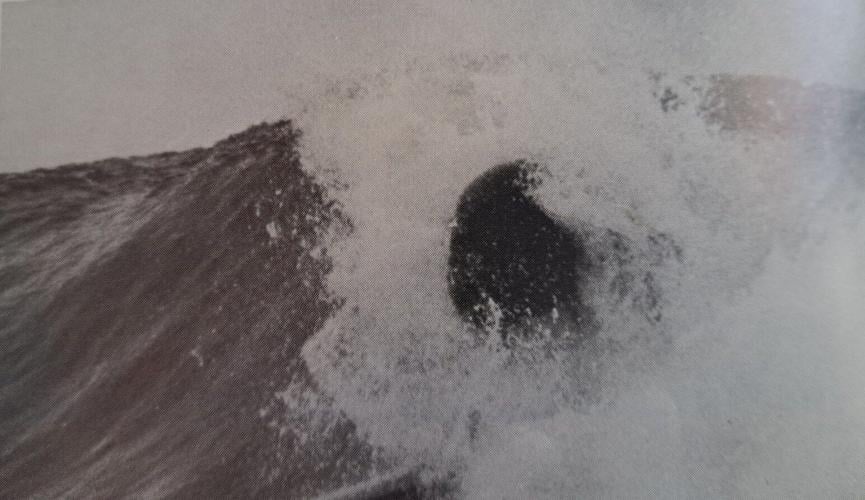 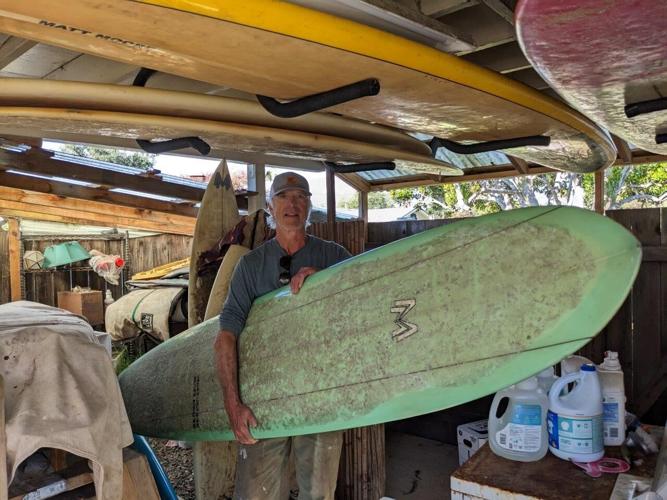 Matt Moore hoists one of his “yard boards” at chez Moore in Carpinteira’s Concha Loma neighborhood. 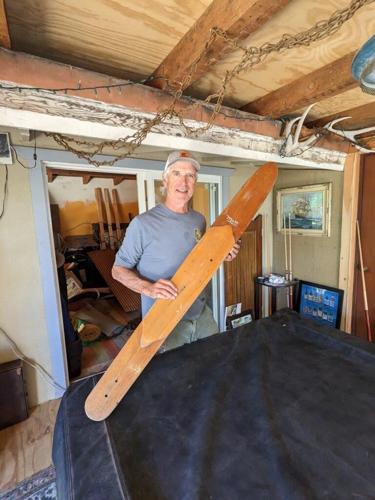 Rincon icon Matt Moore’s birds eye maple water ski was made for him by his father, from whom Moore got an early introduction to craftsmanship and other skills useful for his future career. 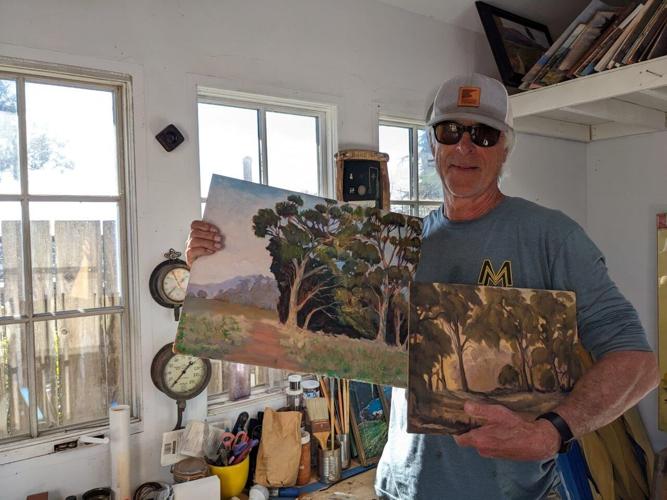 Matt Moore identifies as a surfer, fisherman and artist.

Matt Moore hoists one of his “yard boards” at chez Moore in Carpinteira’s Concha Loma neighborhood.

Rincon icon Matt Moore’s birds eye maple water ski was made for him by his father, from whom Moore got an early introduction to craftsmanship and other skills useful for his future career.

Matt Moore identifies as a surfer, fisherman and artist.

Matt Moore is a Rincon Point icon of the first order. Best known for his Rincon Designs surf shop on Linden Avenue in Carpinteria, Matt first surfed Rincon at the tender age of eight and has never looked back or felt the need for foreign vistas. And why not? Between the Channel Islands, local beaches and the mighty Los Padres, Matt has found all he needs for a well-lived life centered on the 93013-zip code. Over a late morning recently, Matt recounted his own surf story and memories of Rincon Point. Our conversation was laced with plenty of digressions on topics such as why the large swells of days gone by are rarer now (and whether they will return), localism, sharks and much more.

Matt lives in his childhood home, where he grew up, fell in love with surf and sea and started a fledgling board business. The Moore home sits in Carpinteria’s Concha Loma neighborhood, a middle-class paradise for a generation of aspiring beach rats and, eventually, a sandy cradle for an exceptional surfing generation that caught the surf bug just as the lifestyle exploded out of Malibu.

All the ingredients required for takeoff were present at Concha Loma. Every tract house had kids, creating a critical mass of offspring of “Greatest Generation” parents who were themselves busily buying into the American dream via affordable suburban tract houses. The kids of Concha Loma of the 1950s and 1960s had the freedom to roam in a pre-organized-fun era before the age of hyperactive and over-scheduled parenting. They also had a ready supply of older mentors, and – most important of all – a beach of their very own, with waves outside the backdoor and a legendary point just down the beach at Rincon.

“A great place to raise a family” wasn’t just real-estate hype but an understatement when it came to Concha Loma. The neighborhood reflected the same small and large trends present in the larger California baby and culture boom. Everything was booming as Carpinteria’s population nearly doubled between 1950 and 1960. Mostly subdivided in the 1950s, Concha Loma was Carpinteria’s first true tract, according to Matt. The Moores took up residence in their freshly built house in 1957 with mom, dad, older sister, Matt (b. 1952) and the family dog. One thousand dollars down and $150 a month got you into your own ranch home and a piece of the California dream. “Our house was a little cheaper than others since we were closer to the railroad tracks,” Matt said. But that was no demerit for the future surfer. Who would not want direct access to the beach?

To make the connection with postwar California’s economic boom complete, Carpinteria even had a defense industry – of sorts – to employ parents. Matt’s father founded what soon became Rincon Engineering. A specialty of the firm: crank handles for army field generators. Per Matt, “those crank handles kept us fed.”

With a baby boom, free-ranging kids, tract homes and a defense industry, the beach was the last ingredient. With the ocean a stone’s throw away, its call was strong for the kids of Concha Loma. Not all of Carpinteria’s greatest surf generation came from the neighborhood, but many did. As Moore remembers it: “12 to 15 of us surfed every day, rain or shine. If we weren’t surfing, we were fishing, spearfishing or something else. We were incredibly lucky growing up here.”

In the early years Matt and crew ruled Jelly Bowl – until they graduated to Tar Pits and then Rincon Point. In Matt’s words: “We didn’t have a care in the world. I lived in shorts and had a bed full of sand.”

Fellow Concha Loma resident Bernie Baker has a similar memory: The sheer joy of pedaling his Schwinn Stingray along the railroad tracks and balancing a board under his arm. “I have lived that moment in time all my life,” he said. For Baker, like Matt, surfing was no mere hobby or sport. Both made storied careers out of their passion; Baker became a photographer and masthead editor at Surfer magazine.

Rincon’s greatest surfing generation had the advantage of mentors and idols. Moore, in particular, was watching Renny Yater, George Greenough and fellow Concha Loma resident Mike Cundith. The latter two founded Wilderness Surfboards in 1966, making use of Greenough’s kneeboard designs and thinking about new fins based on tuna dorsal fins. Both played a role in shaping Matt’s design sensibility as they experimented on the perfect Rincon board. Matt’s epiphany came when he cut down his own longboard by 18 inches in 1967. The era of the longboard and “hanging ten” was ending.

In these early days, Moore kept his attention on the legends at Rincon. Says Matt: “I was big-eyed, soaking it up, taking it in. We kept our eyes on guys like Yater, Kemp Aaberg, and George (Greenough).” Back then, all the action was in the Cove; almost no one was at Indicator, as Matt remembers it. A name that Matt recalls pioneering the Indicator was Leslie (Les) Wong, a mysterious Hawaiian shredder who was later immortalized by William Finnegan in his surfing bestseller Barbarian Days.

Greenough’s influence on Matt wasn’t limited to surfing and boards. “George taught me how to be a waterman, more than just a surfer,” Matt shared. Beyond the waves were abalone, fish and abundant adventure. To this day, one of Matt’s most treasured possessions is his 24-foot Radon, the perfect companion for trips to the Channel Islands.

Matt Moore’s Queen of the Coast

Matt’s relationship with the Queen is close. “She never gets older, although we do. No one owns her. You must treat her right. Then maybe she’ll be nice to you back and reward you with a good wave.” In this vein, Matt remembers his mother telling him to persevere early on, even if the going occasionally got tough, thanks to rough treatment from less well-mannered Queen denizens. His mom’s advice? “If you like it there, hold your own and don’t give up.” Good advice for us all.

It would require a year of columns to do justice to Matt Moore’s impact on Rincon Point and wider surfdom. Vince Burns and Stephen Bates hope to return to Matt’s story – with historical photos – later this year. Rincon Point news: the “waiting period” for the Rincon Classic begins January 21. Celebrating Rincon: Burns and Bates have written a history of Rincon Point (amazon.com/dp/1467108707) which is available locally and online. They will be presenting photos and stories from the book at the Carpinteria Community Library on Sunday, Jan. 15 at 3 p.m. Copies of their book will be available for sale. If you have Rincon stories to tell, get in touch with Vince at vinceburns805@gmail.com.