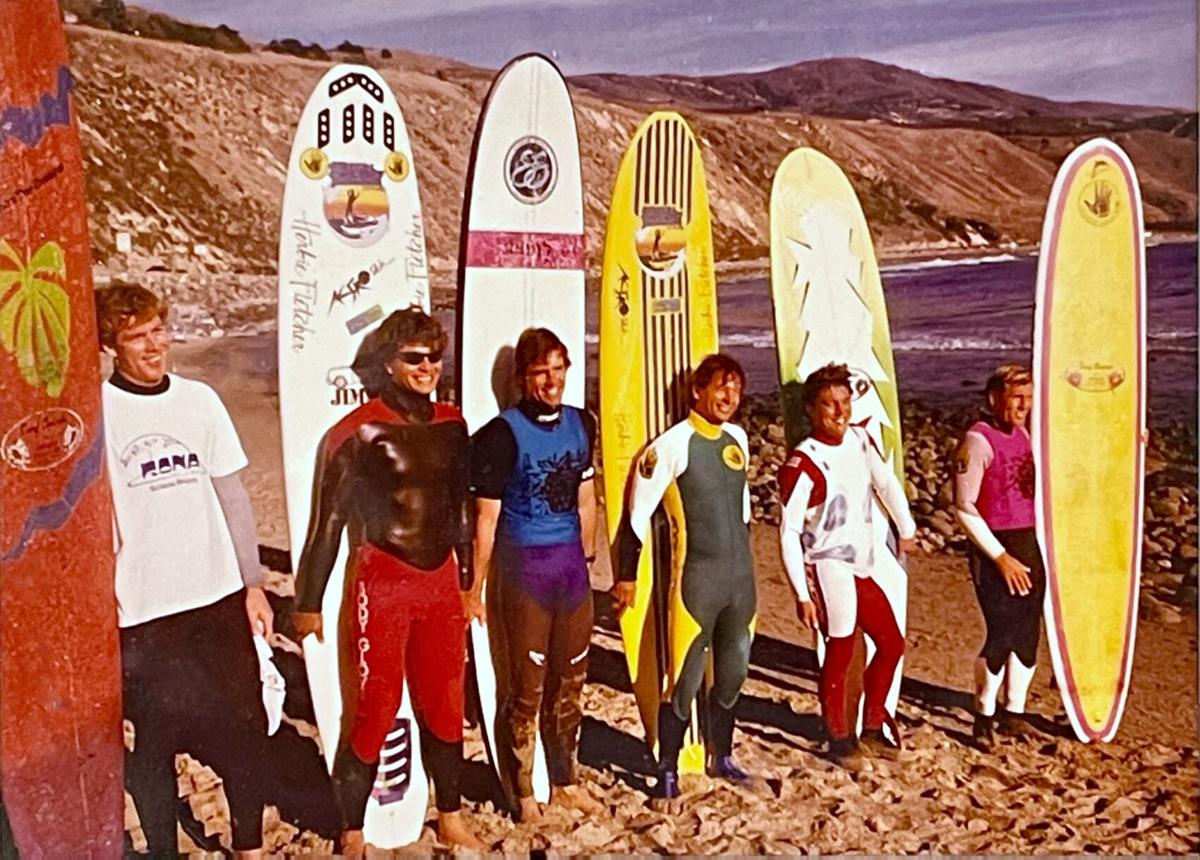 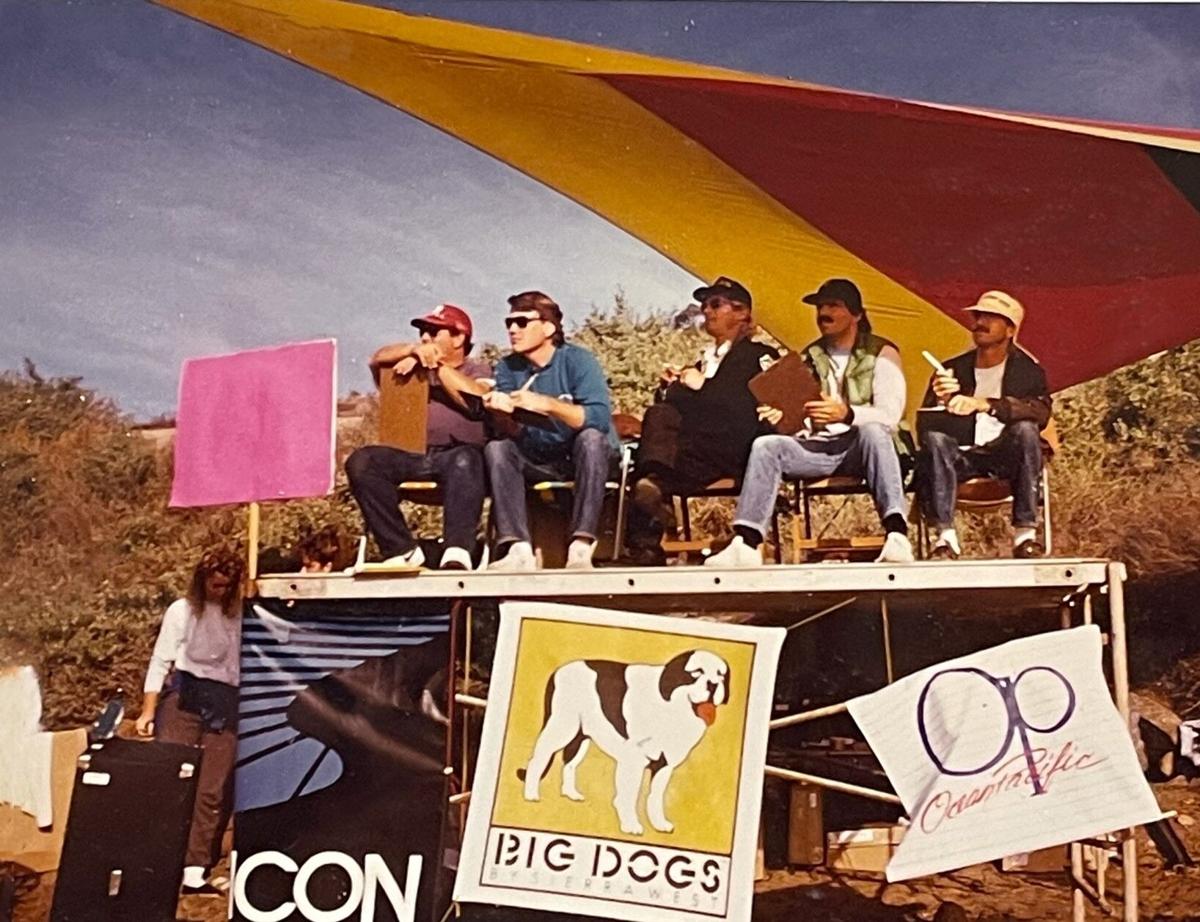 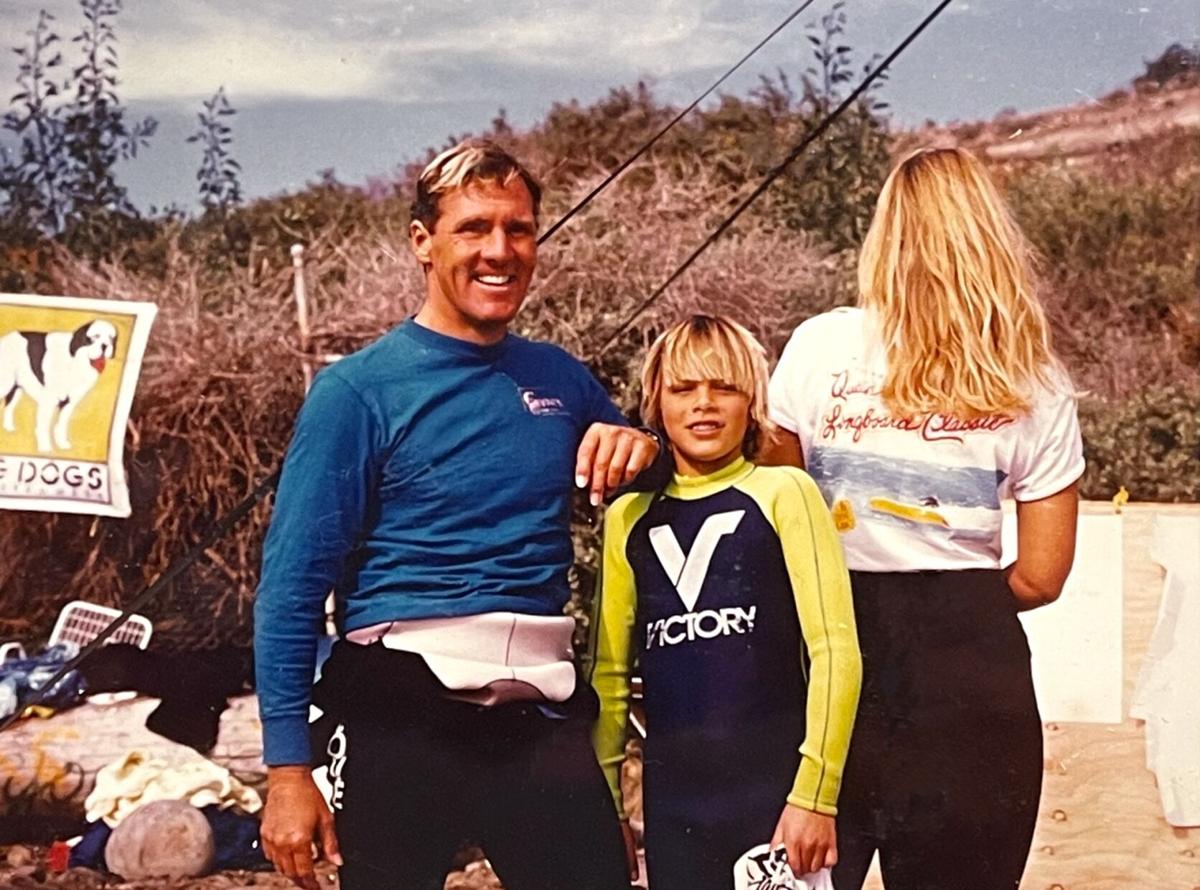 From left, finalist Dale Dobson, 11-year-old Nathan Fletcher (the youngest competitor), and Kathleen Balch with back turned, showing the contest T-shirt with a circa 1967 Steve Bissell photo of Jeff Boyd doing a fin-out rail turn on a Yater Spoon at Rincon. 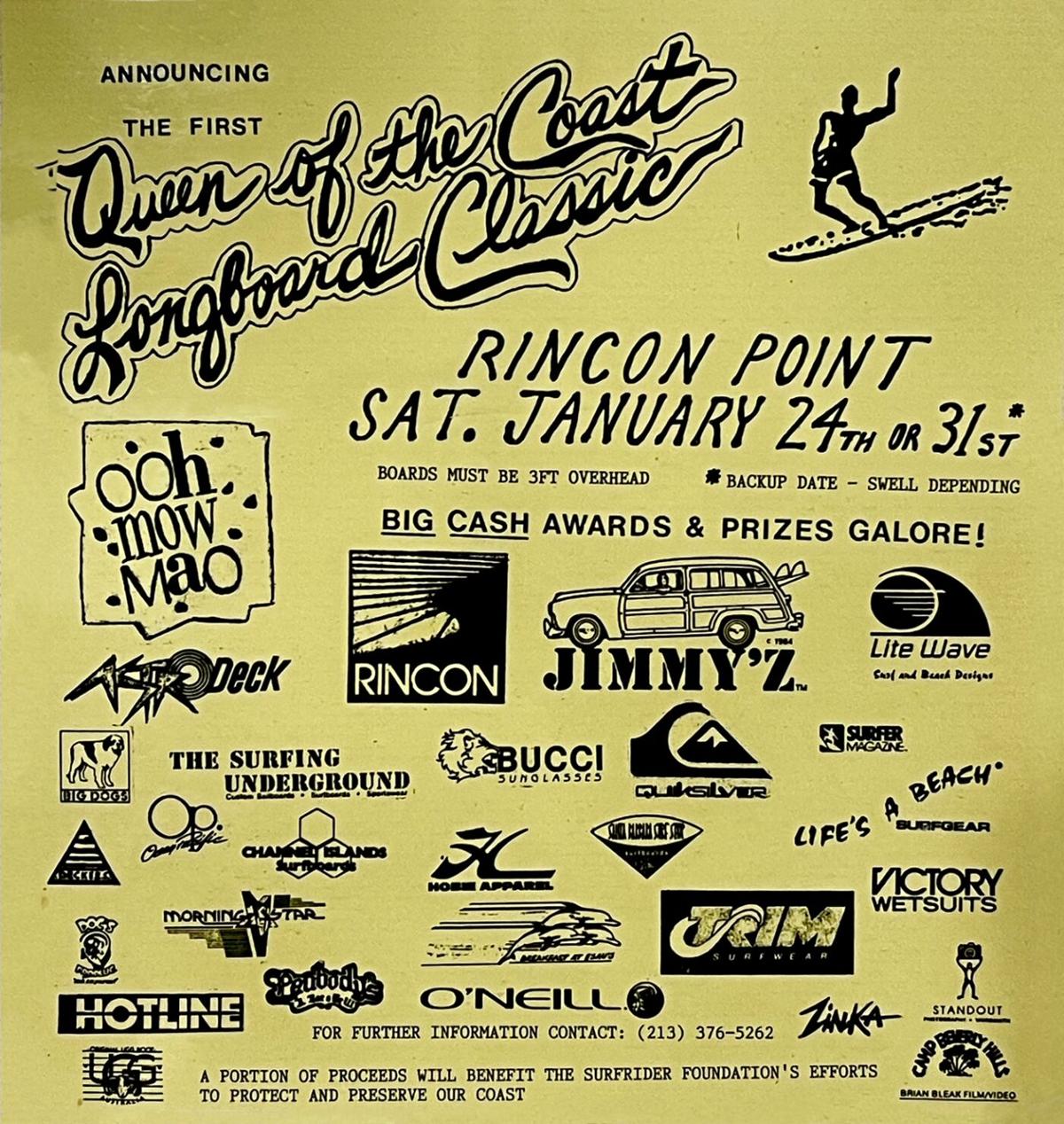 This 1987 flyer announced the first, and only, Queen of the Coast Longboard Classic. 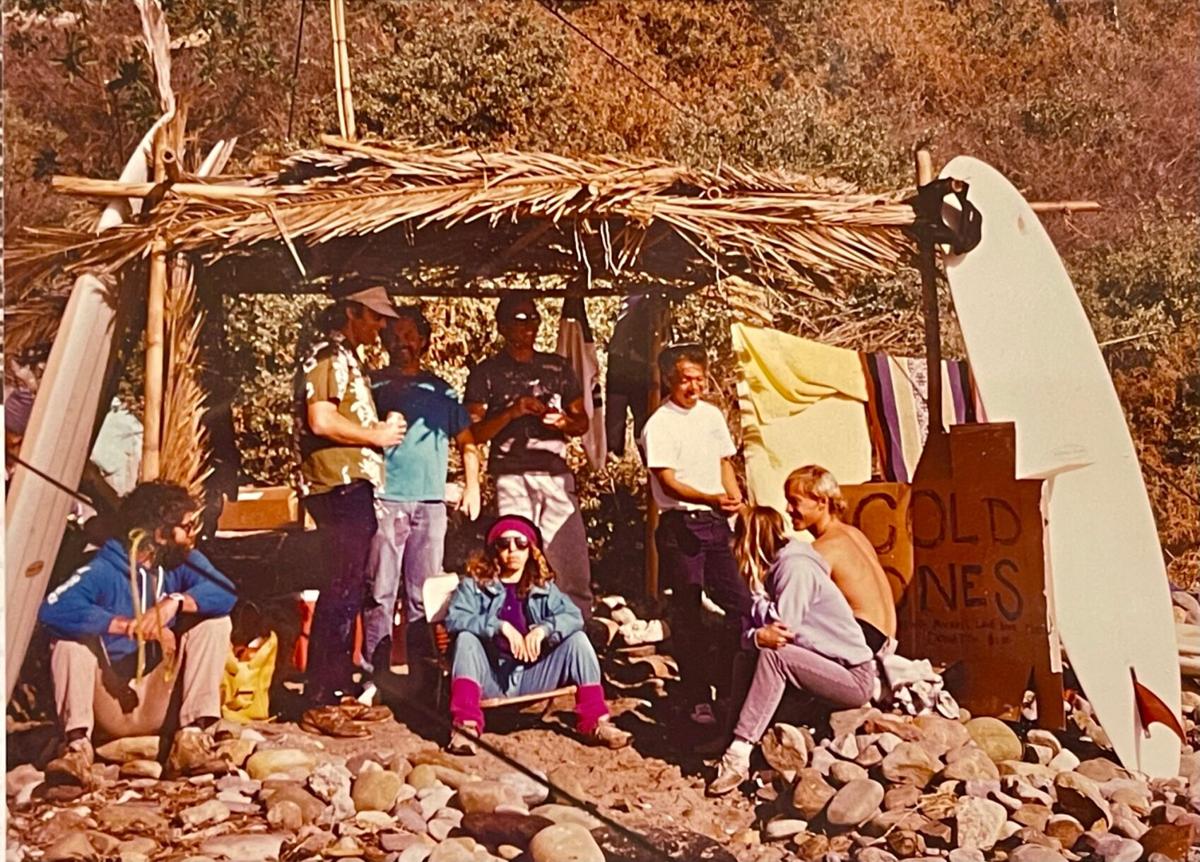 Local Rinconers enjoy the Queen of the Coast Longboard Classic from their palapa.

From left, finalist Dale Dobson, 11-year-old Nathan Fletcher (the youngest competitor), and Kathleen Balch with back turned, showing the contest T-shirt with a circa 1967 Steve Bissell photo of Jeff Boyd doing a fin-out rail turn on a Yater Spoon at Rincon.

This 1987 flyer announced the first, and only, Queen of the Coast Longboard Classic.

Local Rinconers enjoy the Queen of the Coast Longboard Classic from their palapa.

As local surfers gear up for the 2022 Rincon Classic – returning for its 40th iteration after a one-year Covid-19 hiatus – a nearly forgotten Rincon contest from the 1980s marks its 35th anniversary. In 1987, Don Balch and his future wife Kathleen gathered professional longboarders from throughout California and beyond to compete in the first (and only) Queen of the Coast Longboard Classic.

Balch’s idea: the time was right for a longboard contest. Sure, shortboards thoroughly dominated by the mid-80’s, but nostalgia for longboards was stirring, and summer longboard contests had appeared by the mid-80s down south at Malibu and Oceanside. But Rincon boasts a legendary longboard history of its own, with the likes of Renny Yater, the Aabergs and many others. The 1987 event’s commemorative shirt referenced this storied past, featuring Steve Bissell’s iconic photo of Jeff Boyd making a dramatic fin-out turn on a Yater longboard.

Once scheduled, anyone who was anyone in longboards wanted “in,” and the 72 contestant slots filled up quickly. Besides a chance at good prize money and glory, the other alure: simply having the Rincon waves uncrowded, unheard of for a Saturday with good surf. So, a storied cast of longboarding stars took to the waves that January day.

Skip Frye (b. 1941), was a surfing legend since the 1950s. When Balch arrived at Rincon early in the morning of the contest and spotted Frye paddling out for a warm-up, he knew it was going to be a good day.

Herbie Fletcher (b. 1948) competed and finished fourth. After making his mark in the 1960s, Fletcher led the longboard’s return beginning in the late 1970s. Today he is the patriarch of a well-known surf clan.

There were actually two Fletchers in the water that day. The second was a legend in the making: 11-year-old Nathan Fletcher. Today, Nathan is a big-wave charger with credibility galore. Google his name and Tahiti and be prepared for a nerve-racking video showing him nearly devoured by a monster South Seas wave.

Of the locals, Andy Neumann and Scott Gaul had good days and made it to the challenging second semifinal heat where they had to go up against most of the top finishers.

So, who won? Once it went to the judges, discussion centered on whether crowd-pleasing tricks and footwork or “pure class and style” (in the words of judge Bruce Fowler) should get the most points. Since this was Rincon after all, the latter methodology prevailed and Jay Riddle (b. 1950), aka “The Riddler,” came out on top.

Riddle, who had been a Malibu star since the late 60’s, took home the $1000 prize money. For the other top finishers, see the accompanying photo and caption.

So what’s it like to put on a “first annual” surf contest before internet, cell phones and sophisticated weather forecasts? In the days leading up to the contest, a few items weighed on Balch’s mind: finding plentiful sponsors, recruiting respected judges, ensuring cooperative locals, and (most important) providing waves big enough to honor all those longboards.

To hear Balch tell it, securing sponsors for the event was a breeze. All Don had to do was mention the magical “Rincon” name and sponsors wanted in, forking over great swag and support.

Balch picked top-notch judges for the event in order to ensure their credentials would be unimpeachable to competitors. He settled on an all-star crew: Bruce Fowler, Mike Henson, Bill Hayden, Jeff Kruthers and Tom Cross. All had strong local chops as well as credibility in the wider surfing world.

And speaking of locals, how did Rincon’s everyday denizens feel about the contest? Don says he worried a little about static from regular Rinconers. And while a couple spray-paint comments appeared –“$60!” (referencing the entry fee) and “The Queen?” – but all was well. Some locals even built a palapa and sold $1 beers to the assembled. It was a simpler time.

One thing out of Balch’s control was the weather. Sophisticated internet surf reports weren’t available. But he did have two aces up his sleeve: a top-notch forecaster and luck.

Today, contest promoters can rely on reams of data and models to pick dates with great surf. They may also do as the current Rincon Classic does and pre-publish a “window” for the event, allowing organizers to select the weekend most likely to have the best waves. (In the case of this year’s Rincon Classic the window is January 15 to March 5.) But back in the 1980’s wave forecasting was still a crapshoot that depended on the quality of forecaster and their data.

In his case, Don counted on a local forecaster, who was a classic himself in the surf and sailing weather-conditions predicting game: Rea Strange (1931-2009). Longtime 805ers may remember Strange’s weather reports under his nom de radio of Erich Wright. His surf forecasts were legendarily accurate. Because he could often predict the actual hour a swell would arrive, some surfers honored him as the “wave guru.” And Strange came through on this occasion. Despite Rincon being completely flat two days before the big day, Strange gave his blessing for good surf on the Jan. 24 and Balch got on the phone with his competitors to let them know the Queen’s longboard contest was on.

So the waves arrived on time, and the event was a great success, ending with everyone hoping for another iteration in 1988. Unfortunately, Balch’s job transferred him to San Diego and no one picked up the baton. But the competitors and those present still have great memories, and we all still have the accompanying photos documenting proceedings that day, complete with a nice period helping of big hair and rainbow wetsuits.

Local historian Vince Burns is researching, writing, and collecting historical photographs and accounts for an upcoming book on the history of Rincon Point and the surrounding area. He is actively seeking participation from the community in the project and is grateful for submissions of photographs for possible inclusion. If you have historical photos of Rincon Point or additional information to share, get in touch with Vince at vinceburns805@gmail.com or 805-758-0338.