County staff considered rezoning sites noted in orange, including the Van Wingerden 3 and Leason parcels, but ultimately did not chose those for rezoning consideration.

The county recommended two sites, labeled in green – such as Van Wingerden 2 – in the Carpinteria Valley be rezoned for the upcoming housing cycle. 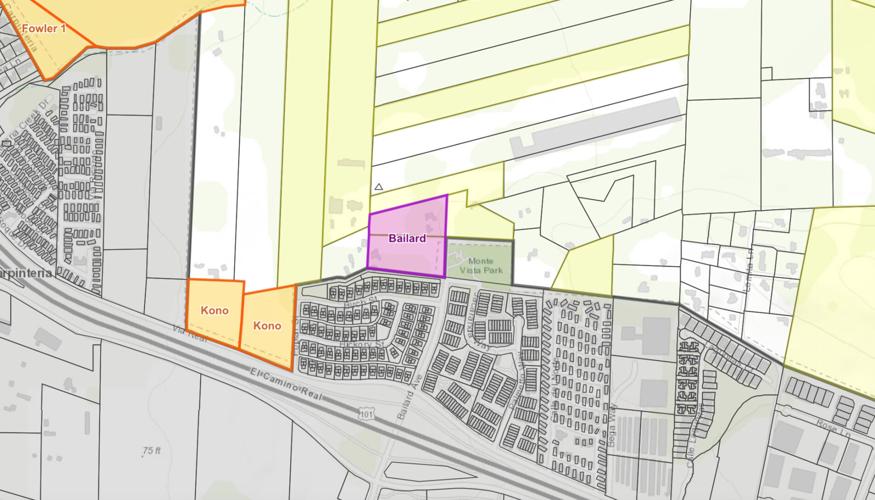 Sites labeled in purple on the map are developments already in progress, such as the Red Tail Multi-Family Housing Project.

County staff considered rezoning sites noted in orange, including the Van Wingerden 3 and Leason parcels, but ultimately did not chose those for rezoning consideration.

The county recommended two sites, labeled in green – such as Van Wingerden 2 – in the Carpinteria Valley be rezoned for the upcoming housing cycle.

Sites labeled in purple on the map are developments already in progress, such as the Red Tail Multi-Family Housing Project.

The release of Santa Barbara County’s proposed Housing Element – a document that looks at how a jurisdiction can address its housing needs – in early November caused a stir among Carpinterians.

City residents argued the proposed rezonings of agricultural areas outside of city limits placed an unfair burden on the city; then-Mayor Wade Nomura argued in a November op-ed that the county’s proposals would result in “negative impacts to coastal resources, including agriculture, that our community has worked so tirelessly to protect.”

This interview was lightly edited and condensed for clarity.

CVN: Tell me a bit about how the county’s housing element is created.

Lisa Plowman: It really all starts with the allocation of units a jurisdiction gets from SBCAG (Santa Barbara County Association of Governments). Once you get those units counts – (this time in) August 2021 – when you get your numbers, then you have to do a land inventory to determine whether or not you can accommodate the housing numbers you have been provided with existing land and zoning.

If you cannot, you have to look at rezoning properties. And that’s the position the county was in this housing element cycle.

Let’s talk about that. Specifically, in the Carpinteria Valley, you said before there has been a bit of confusion this housing cycle.

When we released the maps and we had a meeting, a workshop, there were a lot of questions about the different colors of the maps.

The team looked at properties within the urban areas, around the fringes of the urbanized areas from Goleta area to Carpinteria. A number of sites were initially identified. Those sites were analyzed in terms of constraints.

Certain sites that rose to the top that had limited constraints were identified for potential rezones.

And which sites were those, in the Carpinteria Valley?

There are a couple of different colors on that map. Within the Carpinteria Valley, there were a number of sites that were analyzed. If it’s orange, it was analyzed, but not moved forward for a (rezoning) recommendation for a reason.

And I think there’s a fundamental misunderstanding about what that orange color means. Those are not being recommended for rezones. They were just looked at.

There is a third site that’s in purple – Bailard – and that’s a currently proposed housing project.

That is the Red Tail Housing Project, correct?

Yes. (Developers) are moving through that process.

First, HCD (The California Department of Housing and Community Development) – the state – looks at all of our housing element and our sites to make sure those sites are considered available for development.

The state does not want jurisdictions to propose sites that are already developed and unlikely to convert to housing in the next eight-year cycle. So, they want to make sure that the sites you’re proposing are real sites that could be developed.

Then, after they do their review, we go to the (Santa Barbara County) Planning Commission and we go to the Board (of Supervisors) and the board will pick which sites are going to be rezoned.

There are sites from Goleta to Carpinteria – substantially more sites proposed in Goleta. Once the board decides, then in the case of Carpinteria, the Coastal Commission would ultimately have to approve those rezones because it’s all in the coastal zone.

There will be 30 days for the public to comment on that. That does not include the rezones. (…) then it’ll go to the state for review, then ultimately to the planning commission and the board for hearings. We expect that will be in late summer.

Following that – in a parallel track – there will be an EIR (Environmental Implementation Review) prepared on the housing element rezones. There are more sites than necessary identified so that the board has options to chose from.

You’ve chosen two (sites) so far in the Carpinteria Valley. Is that going to change?

If we get comments about people who want to propose a rezone down there that is a viable site – meaning it’s really available for development – it’s possible that it could change at some point. But we, the staff, are not identifying any other sites in that area.

It’s just at the very first step. The landowners are obviously interested.

A lot of Carpinterians have expressed concern that (these rezones) could unfairly impact the city of Carpinteria and its resources. Can you speak on any of those concerns?

We have a substantial need for housing in our community. It’s gone unmet for decades. This is an area that needs housing. Anytime a housing development is proposed, or there are rezones, there is some environmental analysis to determine impacts.

I will say the state is passing law after law, making these projects ministerial and not subject to CEQA because jurisdictions are not building enough housing. The state is taking away the power of the local agencies. But when we (do) the EIR for the rezones, it will be assessing high level impacts to the areas around them.

The thing that concerns me is that the point of the state’s actions is because we’re having such a critical issue across the state – particularly in jurisdictions like Santa Barbara, where it’s so expensive to live.

There were public workshops a few months ago (when the housing element was first released). Will there be anything similar in the coming months?

There won’t be any more public workshops, but people will be able to access the document off of our website. There will be adoption hearings (for the Santa Barbara County Planning Commission and the Board of Supervisors), so there will be more opportunities for the public to comment in a public forum. Those will happen in the summer.

The county’s proposed housing element map can be viewed at: countyofsb.org/3177/Housing-Element-Update.

[Updated 1/20/2023]: This article was updated to clarify the location of the Bailard property.

CVN Managing Editor Evelyn Spence is going on her sixth year reporting on hot-button issues in Santa Barbara County. She is passionate about covering local, city and school board issues. Send tips to editor@coastalview.com.