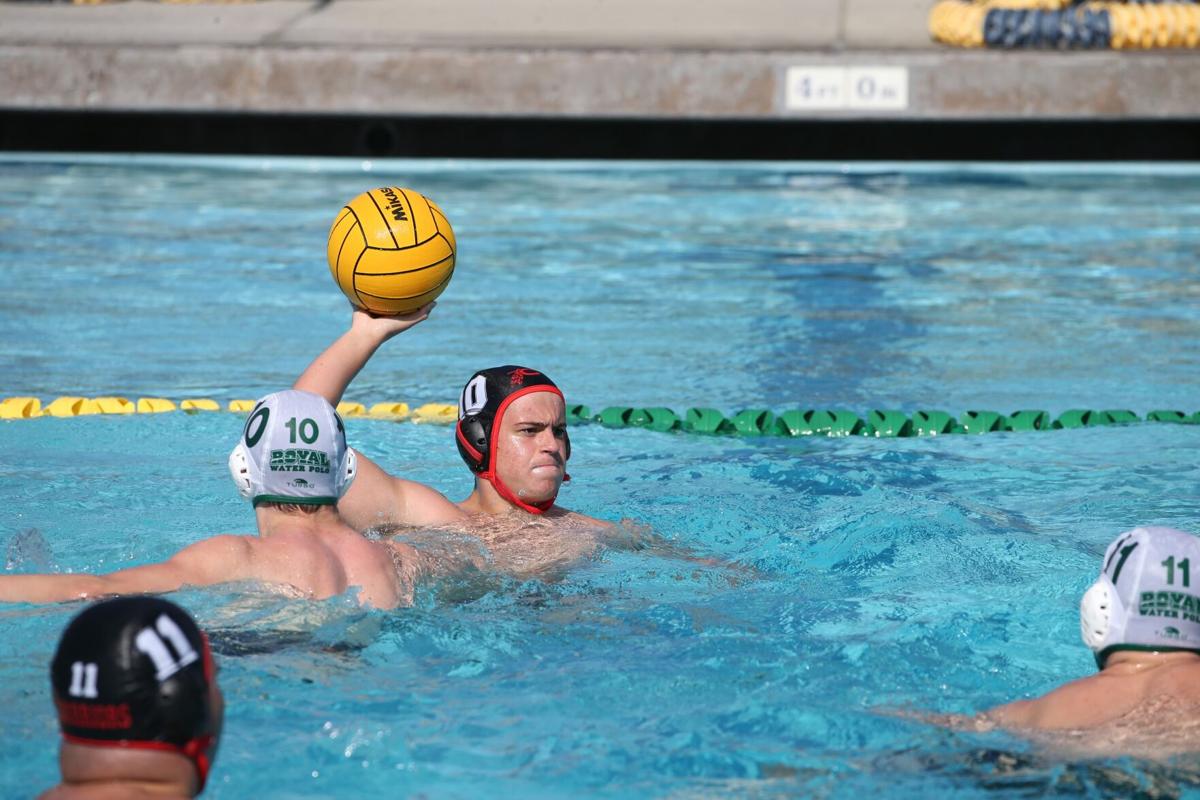 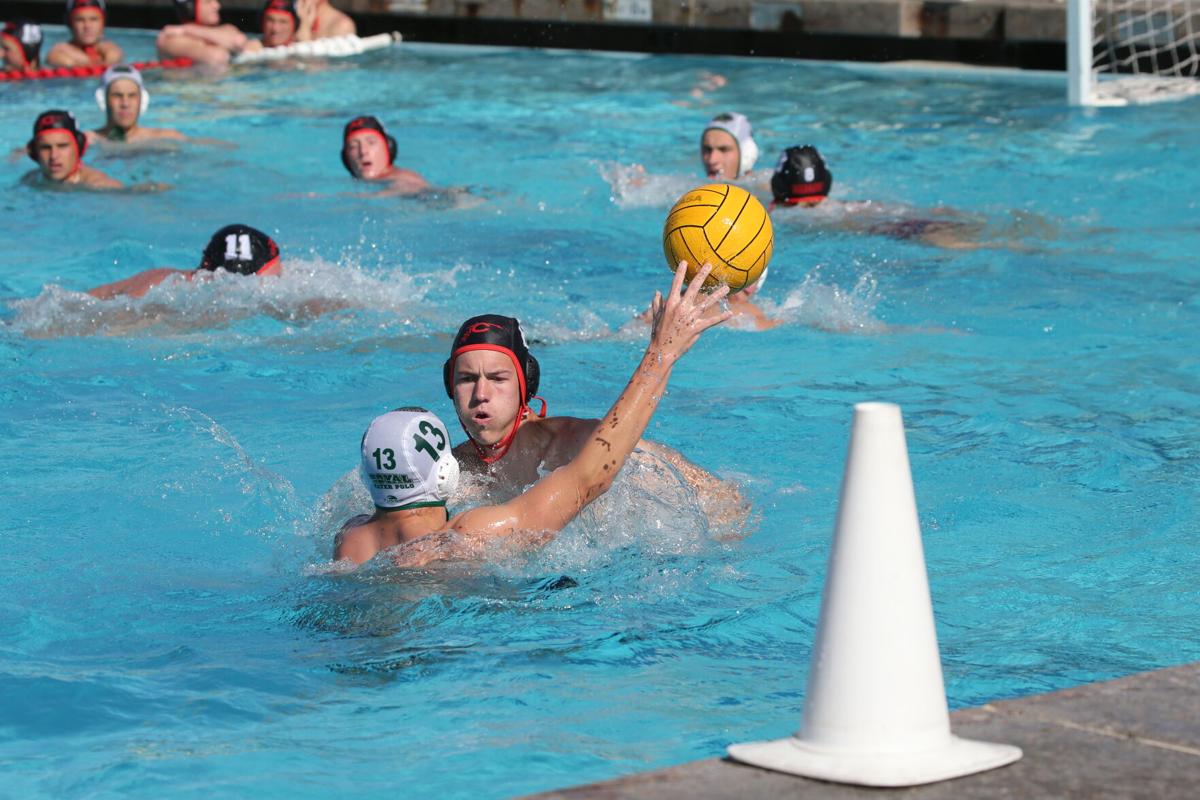 Matthew Lamberti (left) rushes toward his opponent and pressures him into a pass. Coby Gonzalez (far left) and Justin Main (middle back) watch the ball to make their next move. Isaac Carrillo (#11) chases down his opponent while Aiden Neuron (#8) locks up Royal’s defense. 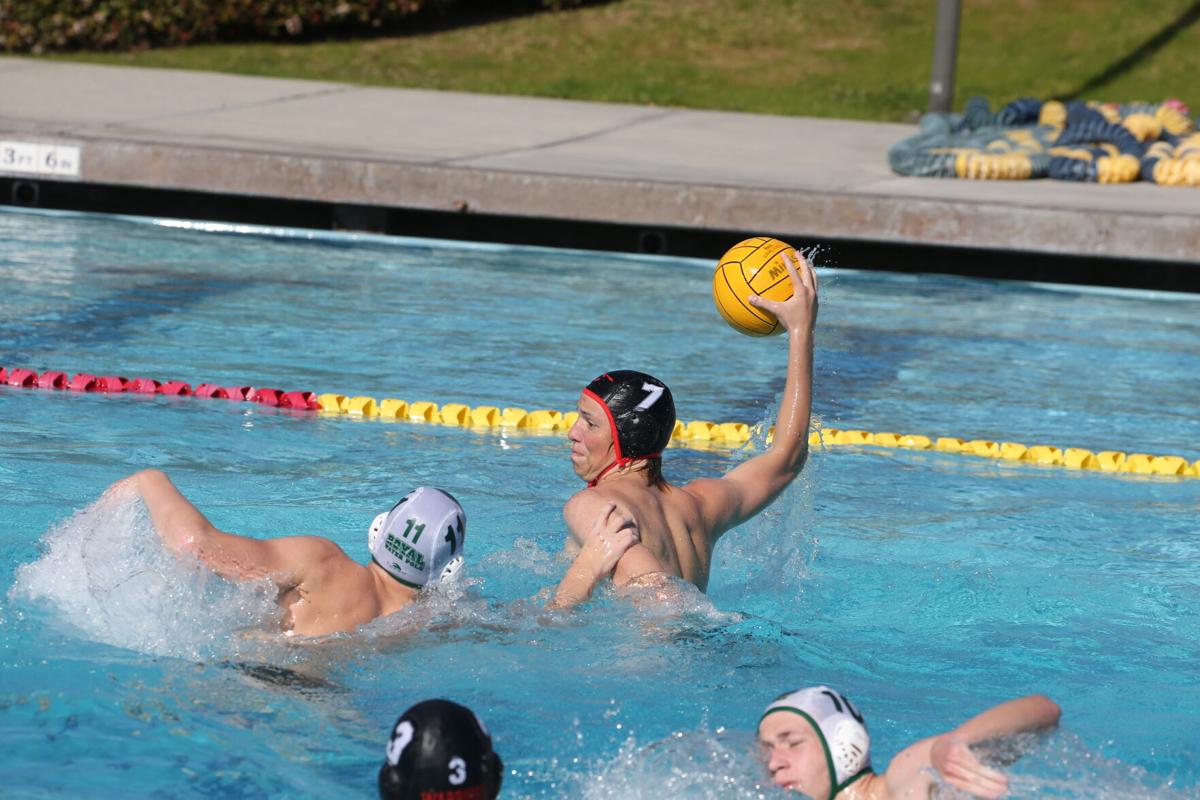 Zach Isaac winds up a shot as a Royal defender readies a shot block.

Matthew Lamberti (left) rushes toward his opponent and pressures him into a pass. Coby Gonzalez (far left) and Justin Main (middle back) watch the ball to make their next move. Isaac Carrillo (#11) chases down his opponent while Aiden Neuron (#8) locks up Royal’s defense.

Zach Isaac winds up a shot as a Royal defender readies a shot block.

The Warriors boys water polo team visited the Buena Bulldogs on Wednesday, March 17, for the second game of their two-week season. The Warriors and Bulldogs fought hard for a lead but kept each other at odds up until halftime, where the game stood tied at 3-3. In the third quarter, Buena scored three goals to put themselves in the lead 6-3 and ultimately went on to take the match 7-4. “Freshman Aiden Neuron had a great game with a solid goal early in the game and phenomenal defense throughout the entire game that netted the Warriors multiple steals,” said coach Sergio Castaneda. The JV team also fell to Buena by a score of 9-7, a promising effort for their fresh roster with little experience.

On Friday, March 19, the Warriors visited Cabrillo for their third game of the season. Both teams started off explosive, scoring goal for goal and maintaining a 1 point match throughout the entire game. However, the Conquistadors were able to sneak a goal and the Warriors were unable to match despite their best efforts, leading to a 9-8 loss for the Warriors. The young squad was not disheartened, as competing with a school a division above them with only three total days of practice is a difficult feat to accomplish. This speaks to the potential of their roster which is only losing one senior this year, Castaneda said. Castaneda also noted that freshman Asher Smith had a phenomenal game, drawing multiple defenders to himself and still scoring four goals. Junior Zach Isaac also played a strong defensive game with multiple steals and great coverage of the opponents’ two-meter man. He also was almost able to save the game by earning the Warriors a 5-meter penalty by getting a ball under on the goalie. The Warriors were not winless on the day, however, as the JV team walked away with a 13-3 victory over Cabrillo.

Finally, on Saturday, March 20, the Warriors hosted the Royal Highlanders for the first and last home game of their short season. The Warriors powered through to win decisively, with strong offense and defense throughout the whole game. Senior Isaac Carillo scored his last goal and led the team to a 15-5 victory. Finishing with a 1-3 record, the Warriors will take this short season into summer training and continue to improve in hopes of winning CIF next year.