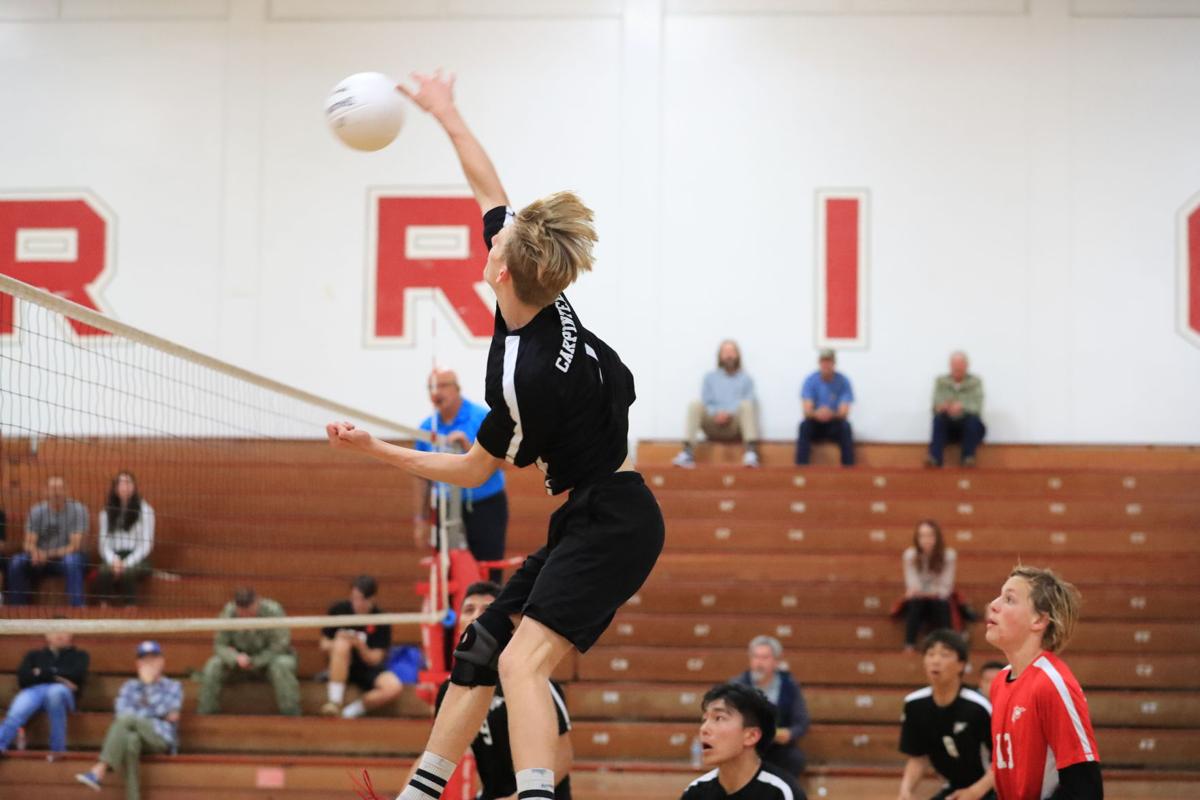 At the net is Diesel Slade in tough match against Rio Mesa. 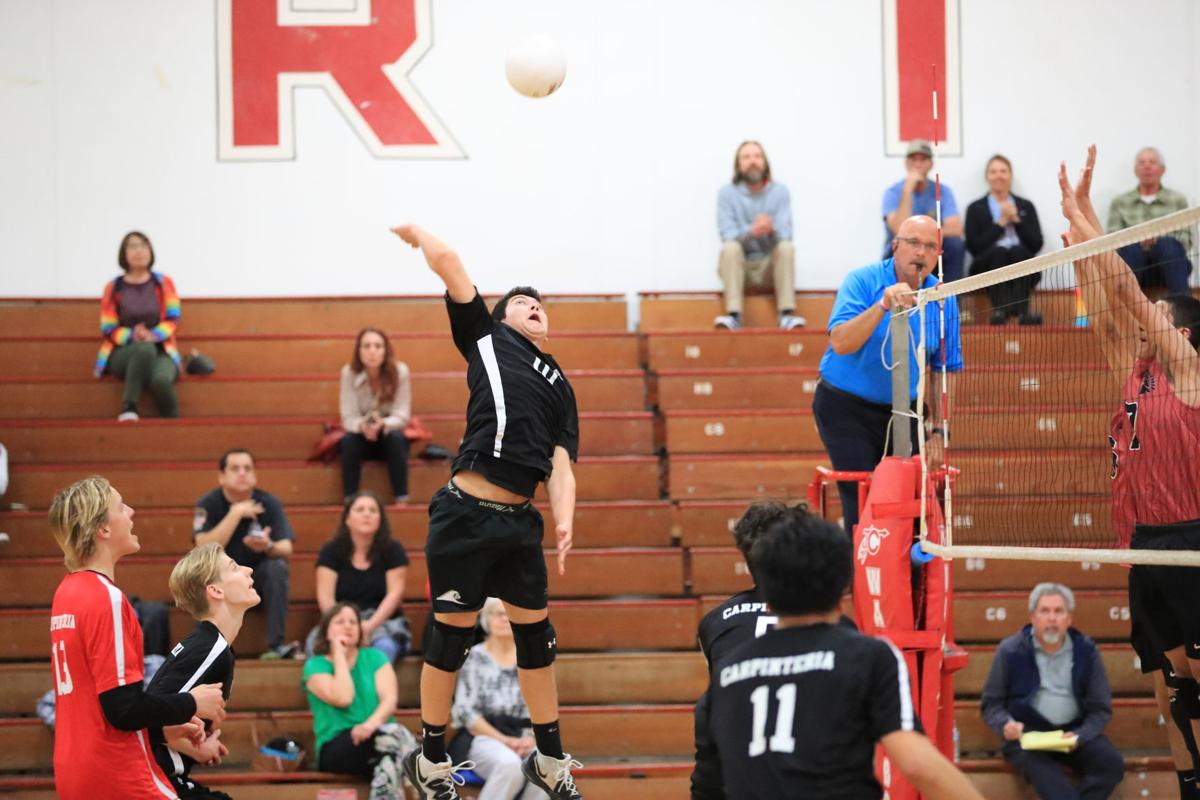 Gabe Medel helped the Warriors get on the board with a spike in the first game. 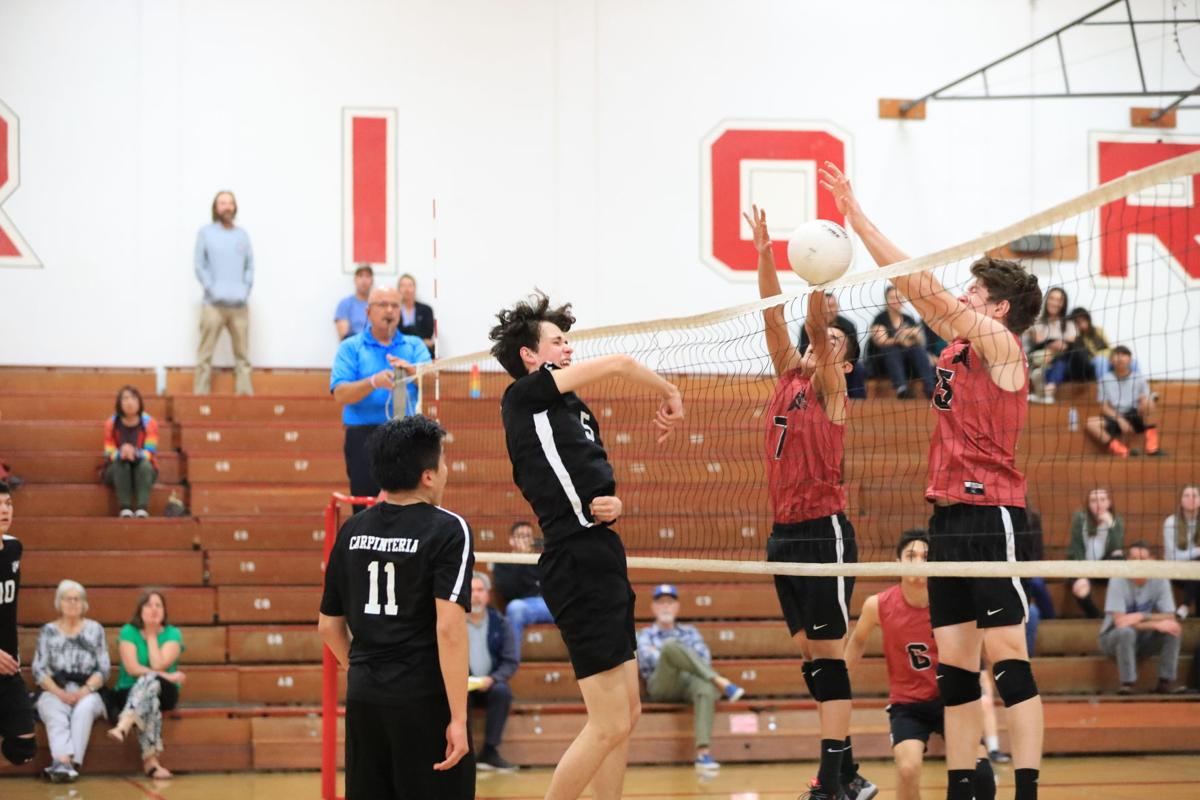 Putting in the blocks for his team is River Taff.

At the net is Diesel Slade in tough match against Rio Mesa.

Gabe Medel helped the Warriors get on the board with a spike in the first game.

Putting in the blocks for his team is River Taff.

On Feb. 27, in a 3-1 game, Carpinteria High School boys volleyball lost to Rio Mesa, a higher division opponent. With the loss, the Warriors—defending Citrus Coast League champions—are now 0-2, two games into the season.

The Warriors got off to a good start in the second game. Arata Tomatsuri served hard and low, pulling the team to an 8-3 lead. A middle block by River Taff built the lead to 10-5. “Taff puts up a nice block, he’s quick, it’ll be nice to see him develop,” said Garcia. A spike by Gabriel Medel pushed the lead to 11-5. Rio Mesa whittled the lead down to a 12-12 tie as the teams battled back and forth for a lead. A dink by Wolbert just over the net put the Spartans up 24-22. Medel scored a spike for Carpinteria, closing Spartan’s lead to 24-23, but Wolbert came through with another kill, and Rio Mesa took the set.

The third set was tight with neither squad holding more than a four-point advantage through most of the game. With Zach Isaac serving, Luke Nakasone dished out a couple of fine passes to Taff and Medel for quick scores, the Warriors built a 24-17 lead. They closed out the third game on a net violation by the Spartans, winning the set 25-17 to stay alive in the match, trailing 2-1 in games.

However, game four was dominated by the Spartans from the outset. With Dykes serving and Wolbert pounding a spike down the middle of the floor, the lead grew to 14-5. When Jesse Morales executed a dink of his own, the Spartans pushed their lead up to 11. “We played pretty well under pressure, they turned it up come the fourth set and sealed the deal,” said Garcia. The Spartans won the final game, 25-14, taking home the match win.

Starting setter Nakasone led the Warriors with 23 assists and served two aces. Outside hitter Medel finished the night with eight kills and 11 digs, and sophomore and starting libero Isaac helped Carpinteria with 22 digs in the back row and two aces.

The Warriors return to action on Thursday, March 5, when they host Garden Street Academy at 5 p.m. at Warriors Gym. They then travel to compete in the Malibu Tournament where they’ll play on Friday and Saturday.