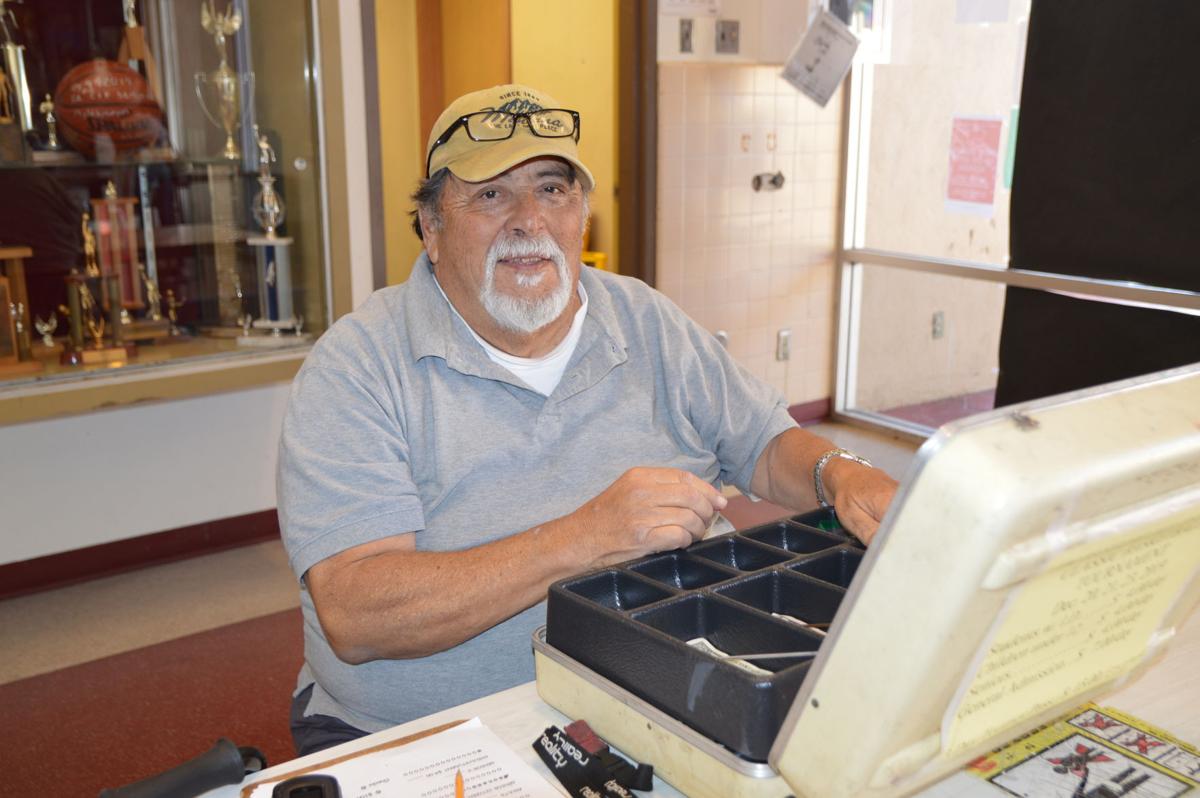 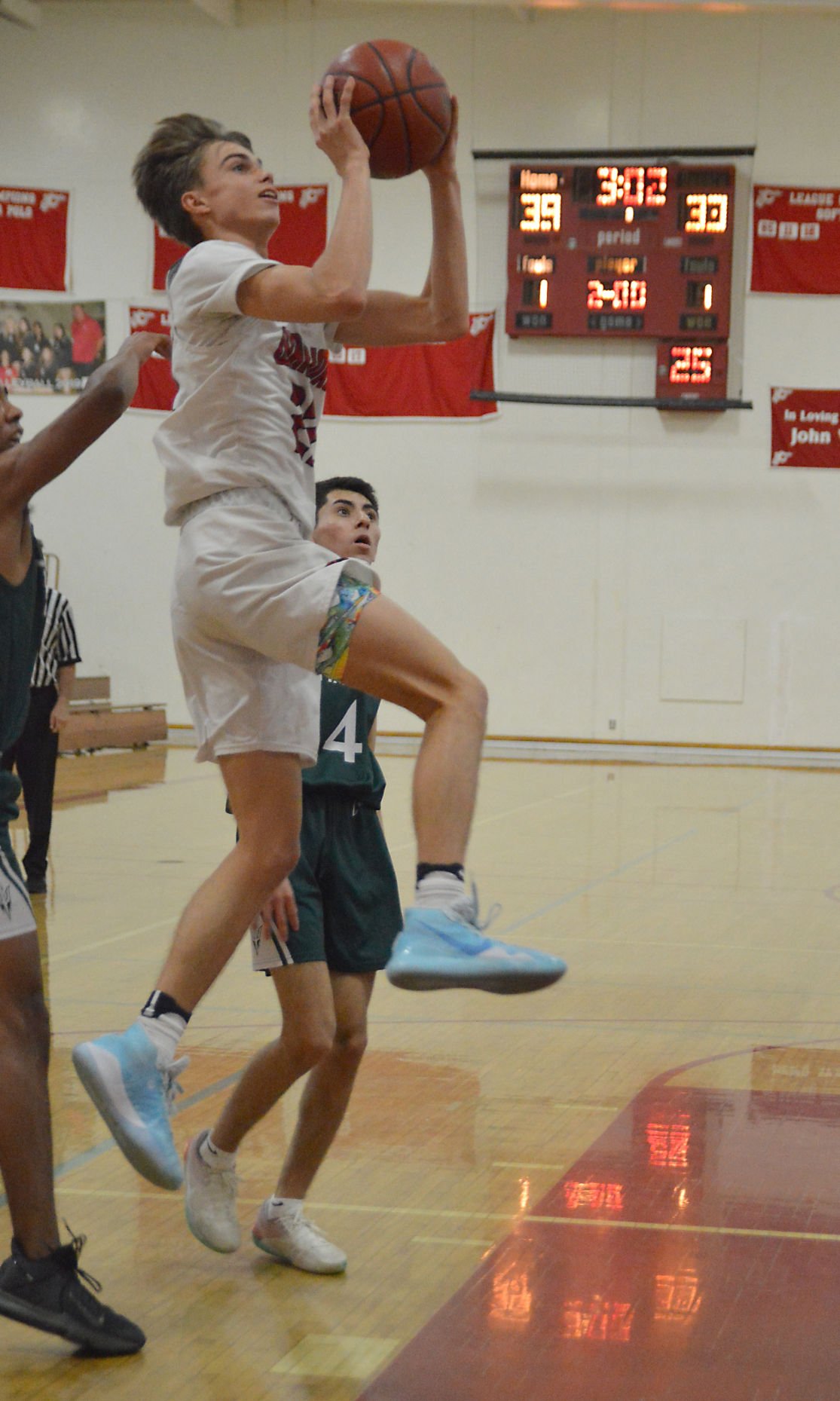 Dylan O’Neil controls the airspace under the hoop at the Warriors Gym. 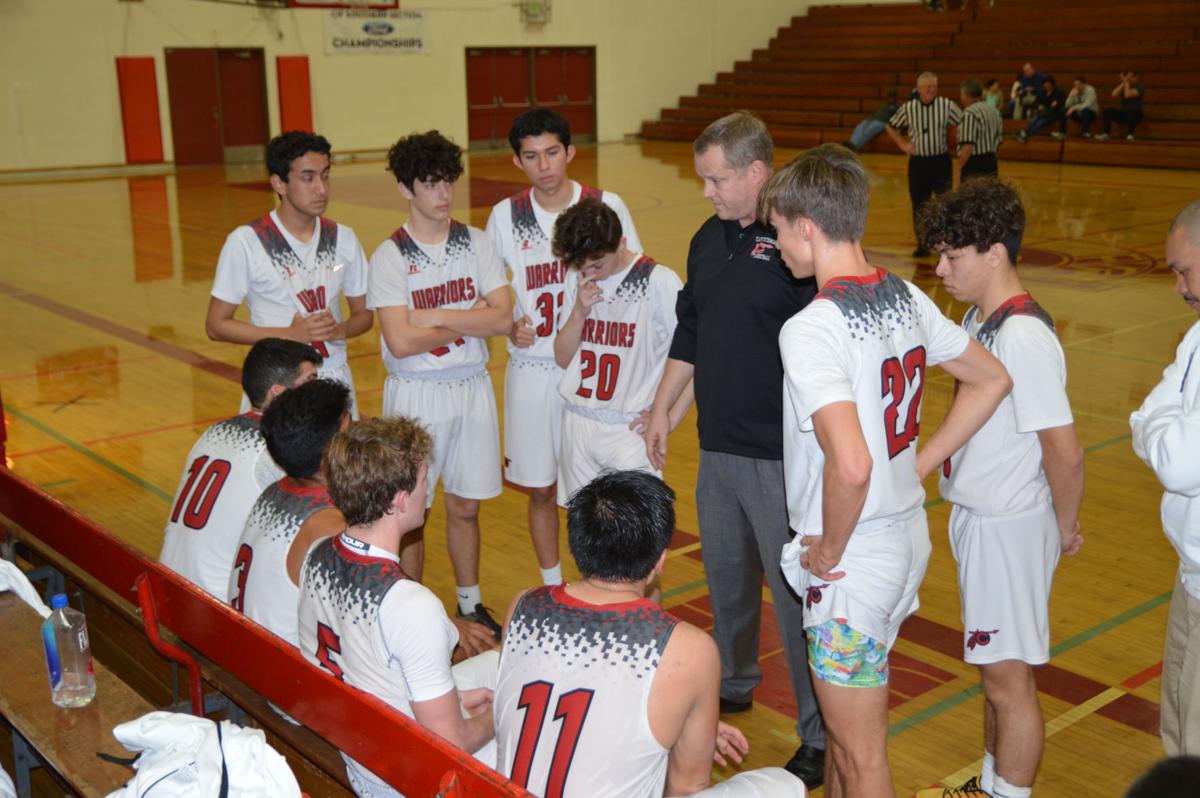 During each practice Coach Sorich tells his team, “everybody on the court is an option.” 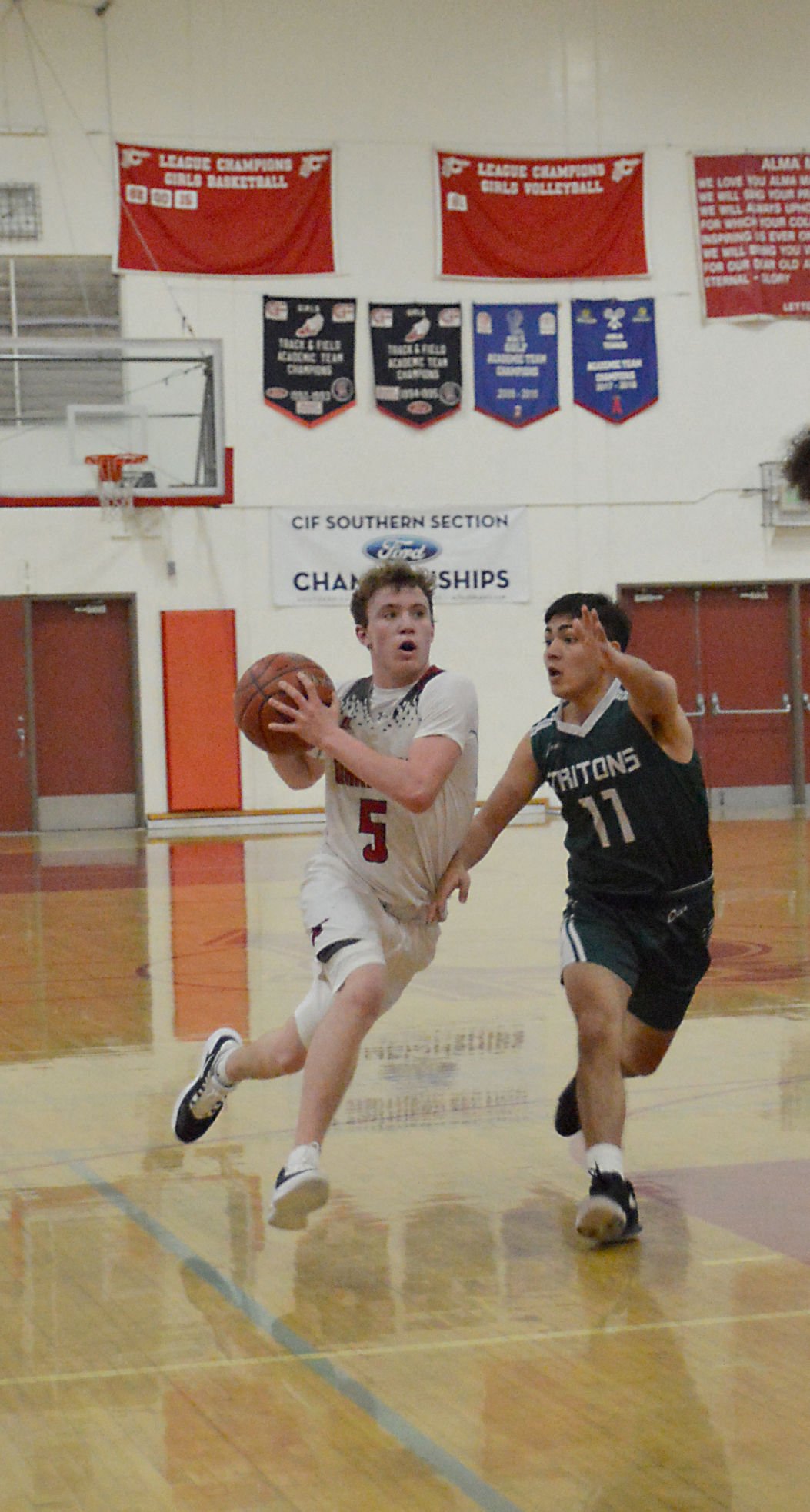 Ian Reed powers past a Tritons defender en route to the Warriors’ 56-52 victory on Jan. 4.

Dylan O’Neil controls the airspace under the hoop at the Warriors Gym.

During each practice Coach Sorich tells his team, “everybody on the court is an option.”

Ian Reed powers past a Tritons defender en route to the Warriors’ 56-52 victory on Jan. 4.

The Tritons of Pacifica High School in Oxnard traveled to Warriors Gym on Saturday, Jan. 4 for a non-league matchup in boys basketball. Though it was the Tritons who scored the first seven points of the game, Carpinteria hung on for a 56-52 win. The victory raises the Warriors over the .500 mark on the year to 7-6, as they prepare for the opening of Citrus Coast League (CCL) play. Meanwhile, the loss dropped the visitors to 4-13 on the year.

Hounding the Warriors in the backcourt from the outset, Pacifica was 7-0 and 10-3 in the early going. But the home team quickly turned things around when Jojo Gonzalez drilled a three-pointer with just under three minutes left in the first quarter, and Carpinteria took its first lead at 11-10. Still, the Tritons clung to a 14-13 lead at the end of the first.

“We knew they were going to 1-2-2 press us. It’s just a lot different going against guys who practice it every day, than going against our own team. We don’t do it, it’s really hard to simulate that in practice,” explained Warriors coach Scott Sorich.

Repeatedly breaking the press in second quarter, Carpinteria earned some easy baskets, including eight points from close range scored by Gabe Medel and seven scored by Mateo Handall, putting the Warriors ahead. However, the Tritons were able to keep pace as Jose Porras knocked down a pair of treys to make it 26-24. Carpinteria ended the half on a high note with Ryan Nakasone and Ian Reed each knocking down shots from behind the arc to put their team up 32-26 at the intermission.

Another three points from Reed extended the lead to 35-28, and when the senior found Nakasone wide open in the lane for a lay-in, the Warriors were up by eight with 3:56 to play in the third quarter. Pacifica, whose football team recently captured the CIF-SS 2A State Championship, began to muscle their way inside as six-foot, five-inch Devin Aupui and six-foot, two Ryan Lynch-Cole converted some close-range shots to cut the lead to two. Exhibiting some good team defense, Carpinteria was still able to hold onto a 43-39 lead going into the fourth quarter.

“I was just talking to our team, and told them from our first game till today, it’s a drastic improvement,” said Sorich.

The two schools went back and forth in the final quarter with Carpinteria going up by as many five, and the Tritons managing to cut the margin to two. A three-pointer at the baseline by Matthew Garcia and a tip-in by Medel once again made it a five-point game with a little over a minute to play. But another trey by Porras trimmed the lead down to 54-52 with 48 seconds left.

The Warriors were then able to run down the clock, and Handall knocked down two key free throws with five seconds left to seal the deal. Handall led the team in scoring with 13 points, and Reed and Medel also tallied 10. Nakasone pitched in eight and Dylan O’Neill registered seven. Lynch-Cole led all scorers with 15.

“I tell our players each and every day at practice, in everything that we do, everybody on the court is an option,” said Sorich.