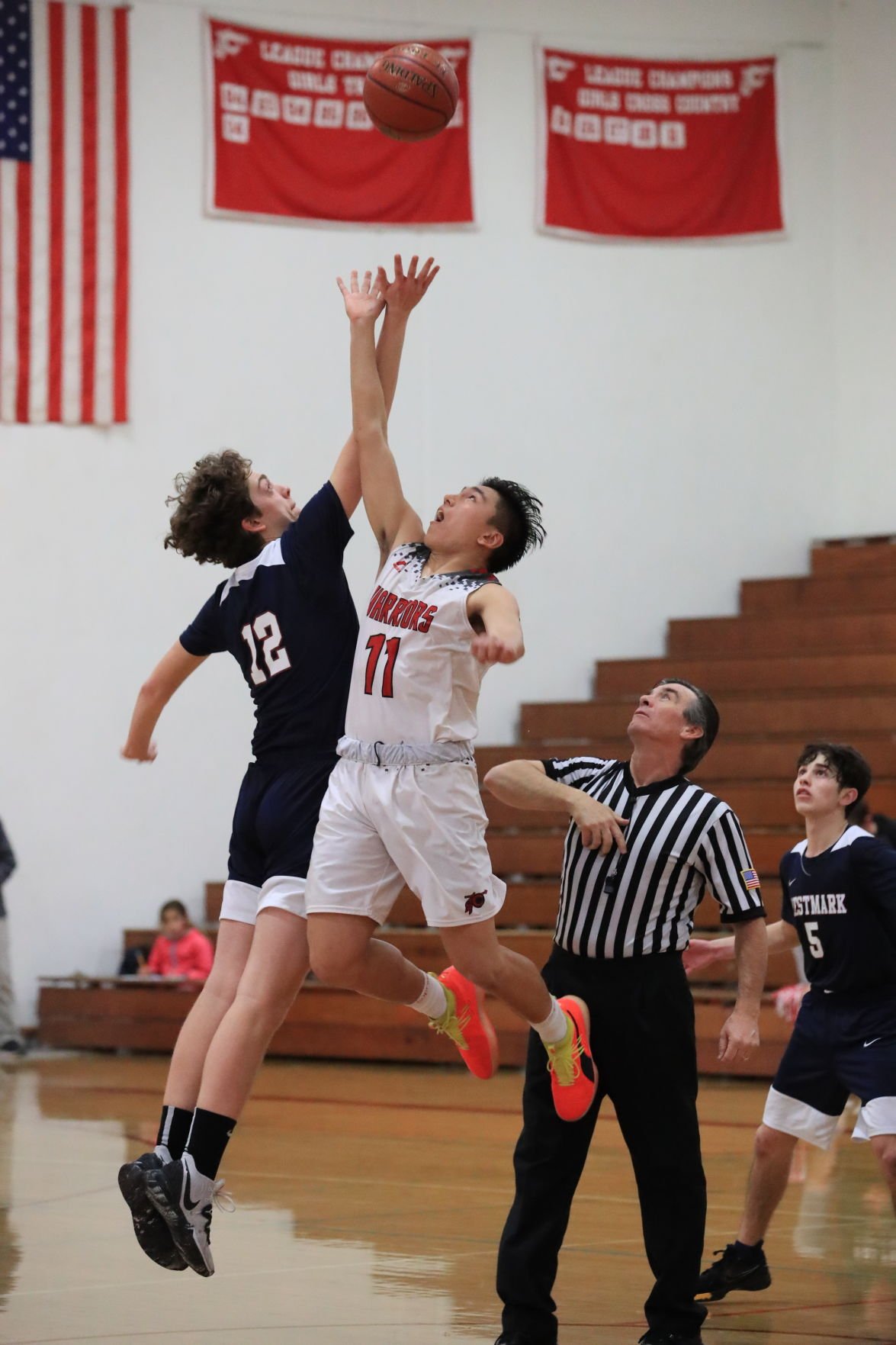 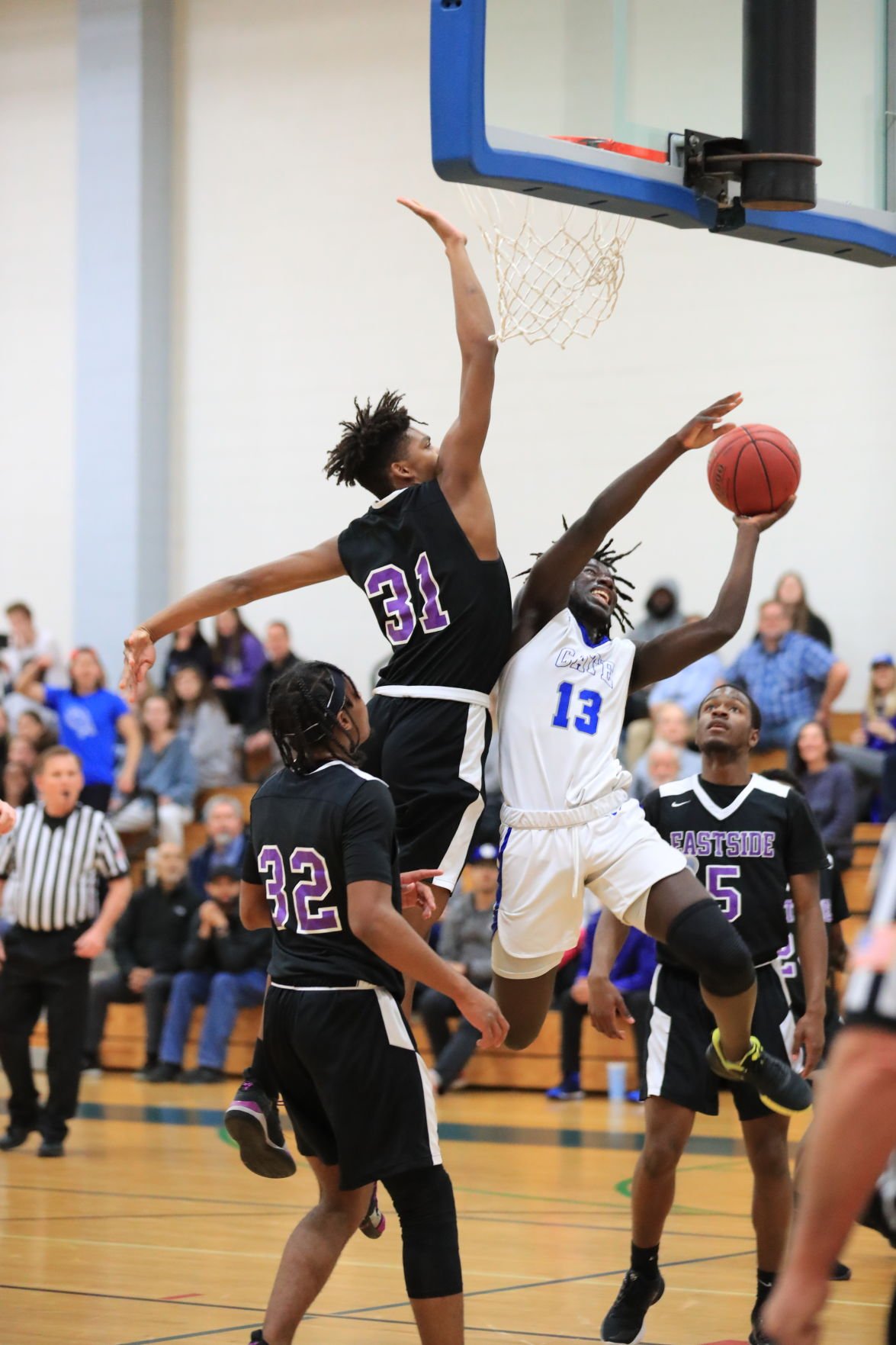 For the second year in a row, Carpinteria and Cate high schools hosted first round CIF-Southern Section playoff games on their home floors. The Warriors entertained Westmark of Encino, while the Rams took on Eastside of Lancaster.

Last season, Carpinteria met Cate in a memorable quarter final playoff game at Warriors Gym that ended with the Warriors edging the Rams, 51-46. This year however, there will be no “Battle of the 192” showdown. Carpinteria moves to CIF’s Five-AA Division, and Cate is in the Four-A Division.

During the first-round playoffs at the Sprague Gym/Harcourt Fitness Center at Cate School, the Rams jumped out to a 7-1 lead as senior Ethan Ng scored the first five points. A few possessions later, the Lions drained a three-pointer to cut the lead to 7-4. But Ng was “on fire,” knocking down four first-quarter treys, electrifying the delighted home crowd and blazing his way to 16 first-half points. Cate ended the stanza 22-17.

In the second quarter, Eastside’s defense keyed on Ng, but he found the open man, fellow senior Khadim Pouye, whose lay-in put the Rams up, 25-19. The Lions kept the pressure on though, blocking or intimidating shots by the Rams inside, evening the score, then taking the lead into halftime, 33-32.

Eastside ran past the Rams, finishing the game 66-53. Ng finished with 20, Pouye finished with 12 and Schnyder was the game’s leading scorer with 21. “I am tremendously proud of our guys, having moved up divisions in playoffs and competing with a very good team, we can carry our heads high,” said Rams coach Andy Gil. Cate finishes their season 15-5 and 6-2 in the Frontier League.

At Warriors Gym, Carpinteria also got out of the blocks quickly. Jose Suarez scored a couple of early buckets boosting his club to a 10-0 lead with 6:18 to play in the first quarter. But the Lions from Westmark also made a run with Brandon Owen knocking down a pair of threes to pull the visitors within three at 13-10. Owen tallied 10 points in the opening quarter, putting the Warriors at 15-12 going into the quarter.

“Ian (Reed) went out early in the game, and that kind of changes our dynamic with that group. It causes a little wrinkle in things when we don’t have our senior leader, team captain and point guard on the court,” said Warriors coach Scott Sorich. Warriors senior Gabe Medel did not play either.

Carpinteria ratcheted up the defense pressure, picking up a couple of steals by Dylan O’Neill and quickly doubled the score at 24-12 with a little under six to play in the half. Senior Jojo Gonzalez came off the bench to score 10, and the Warriors were up 15 at halftime. “We had a defensive game plan and stuck to it—they turned the ball over a little bit, and we took advantage,” said Sorich.

Carpinteria held the Lions to five third-quarter points and breezed to another victory, 78-41. O’Neill led the Warriors with 15 points and 11 rebounds, and Suarez registered 14. Mateo Handall had 13, and Luke Nakasone scored eight and grabbed nine rebounds. Owen was the game’s leading scorer with 19. Carpinteria moves onto the next round with a 17-8 overall record and is 8-1 in the Citrus Coast League.