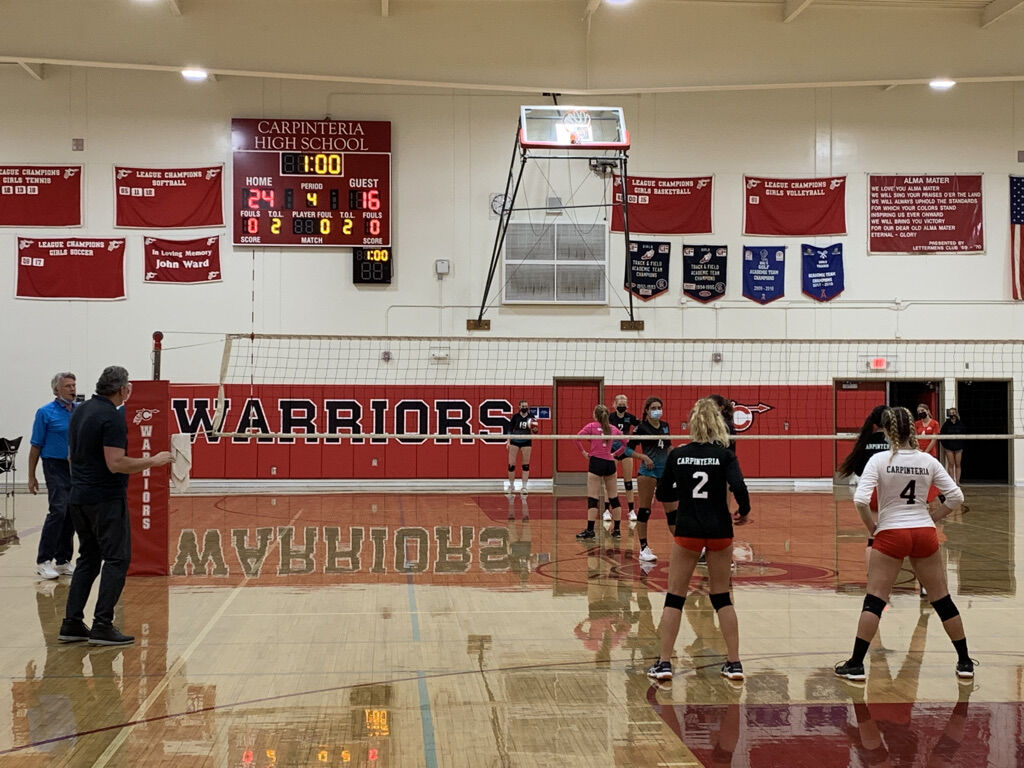 Carpinteria prepares to receive the serve and seal their third Citrus Coast League win in a row. 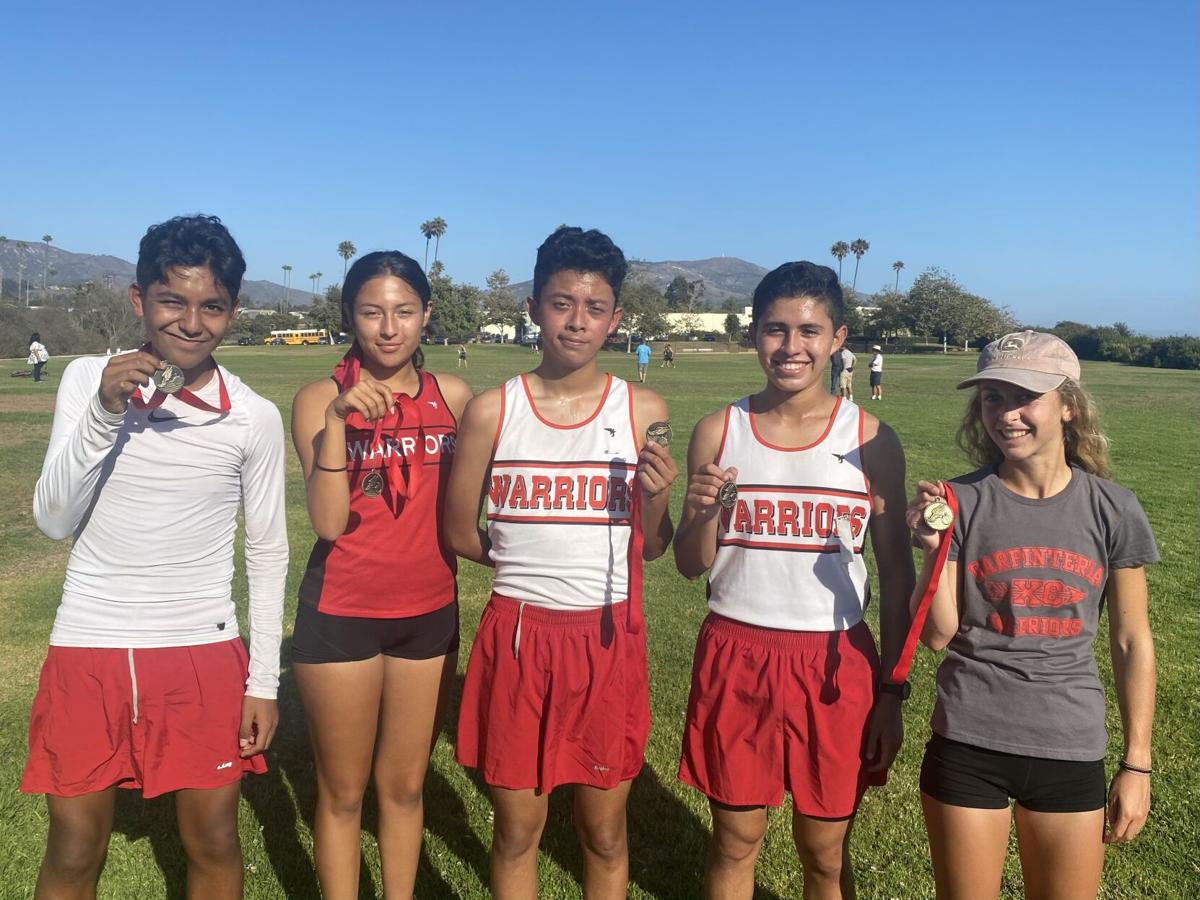 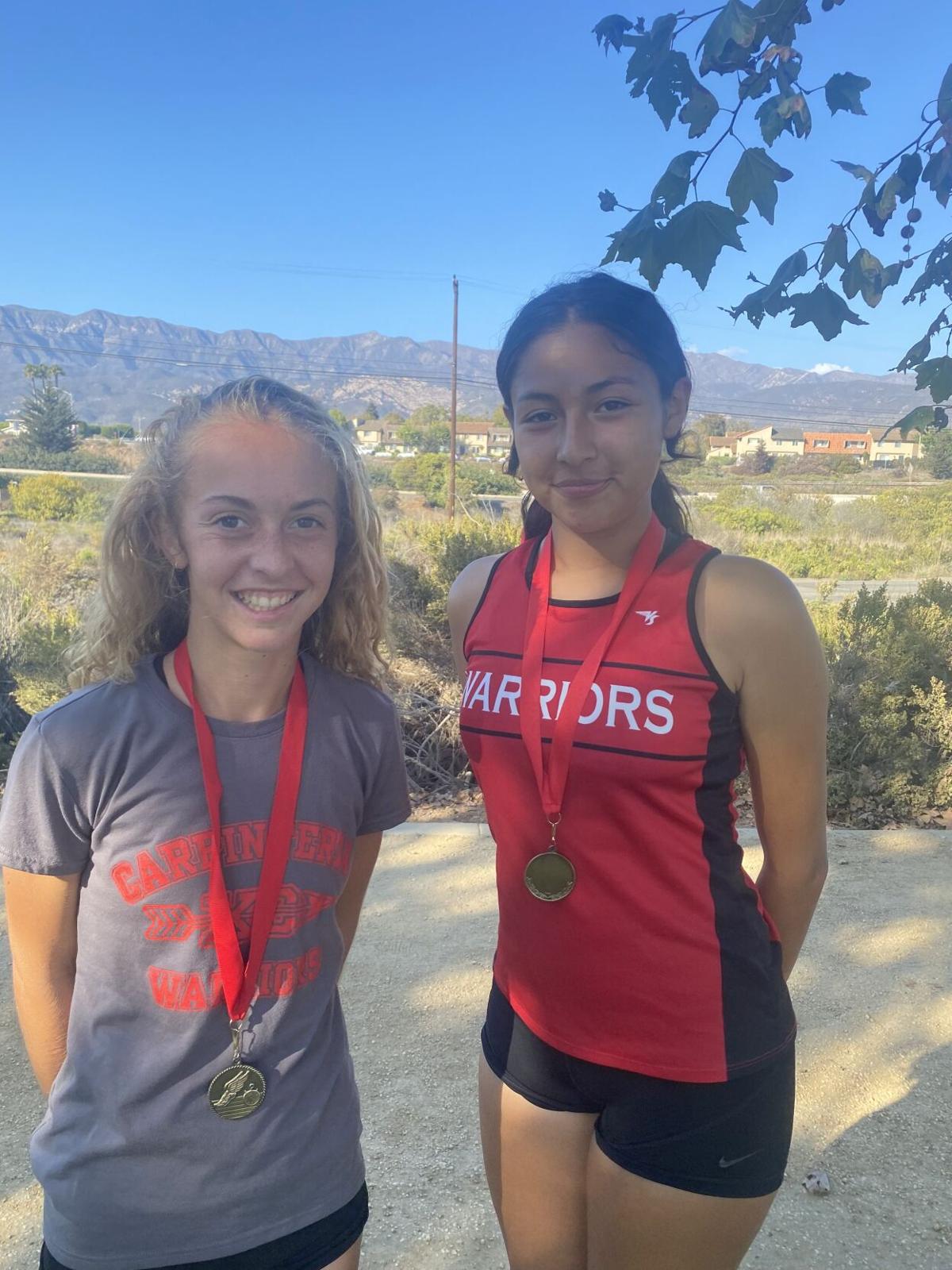 Kate Cooney and Belen Herrera show off their hard-earned medals. 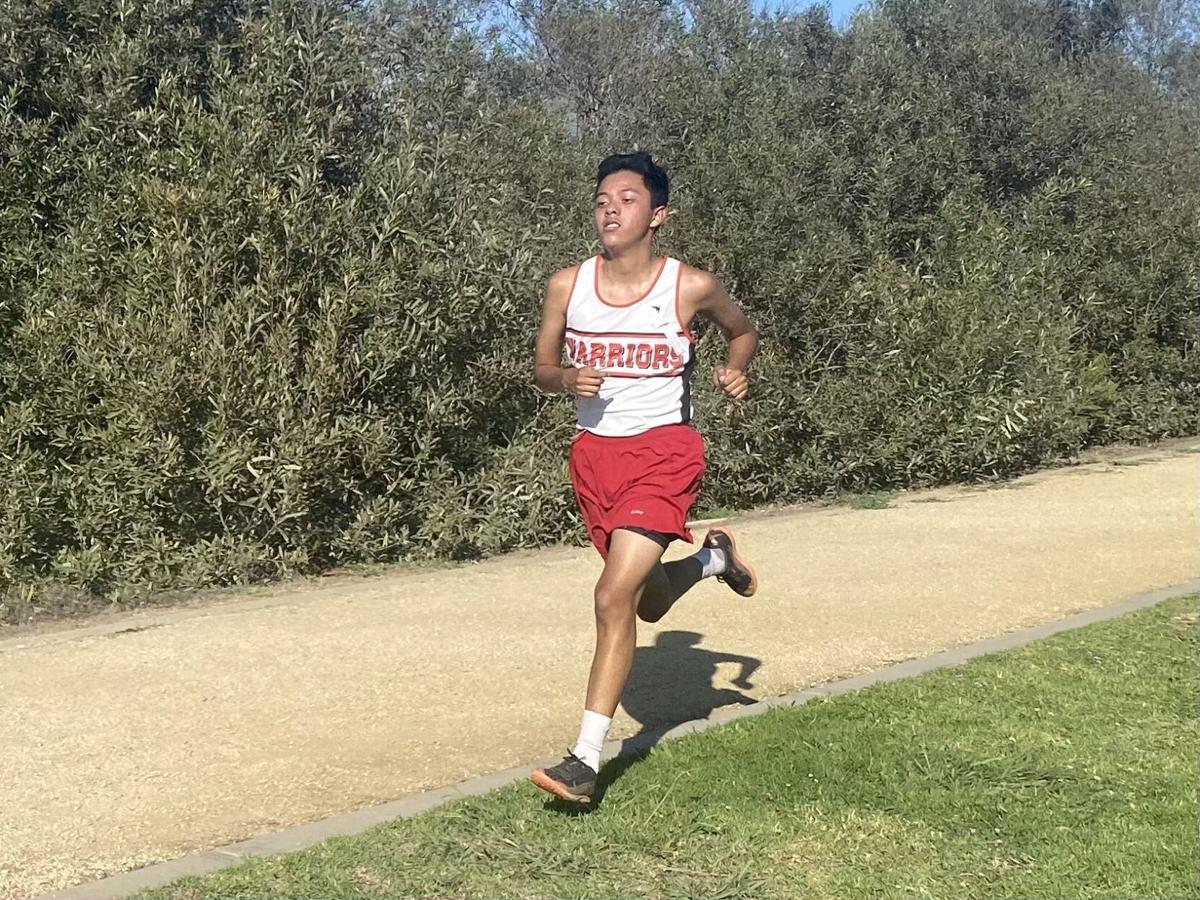 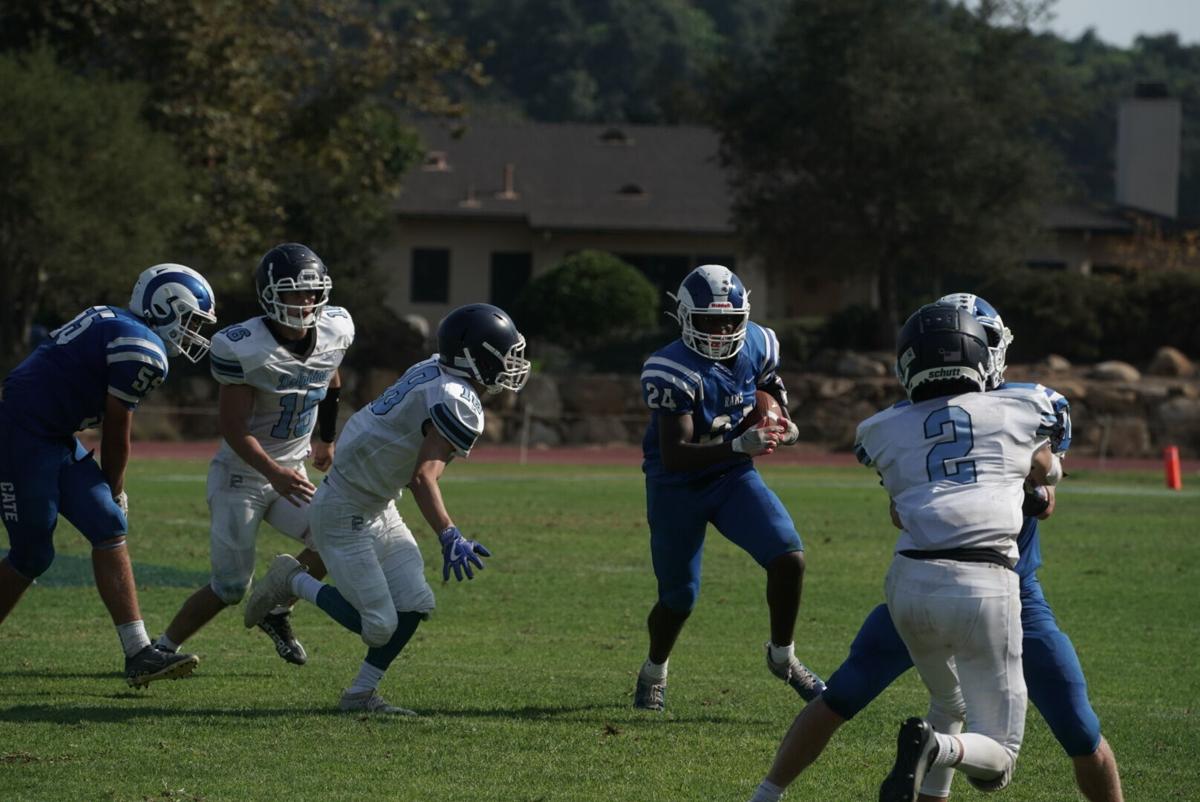 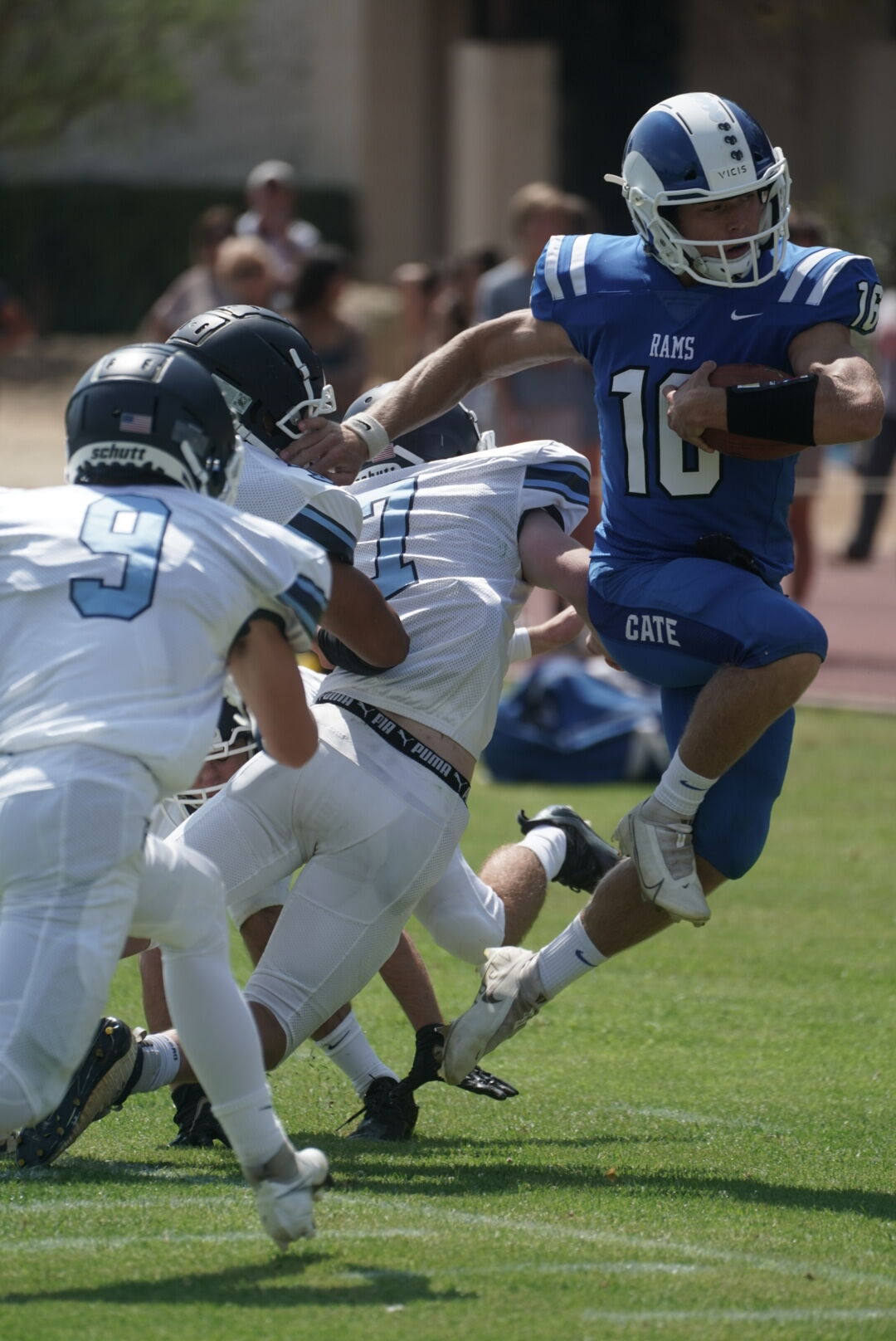 Cate star quarterback Will Bouma breaks a tackle for the undefeated Rams. 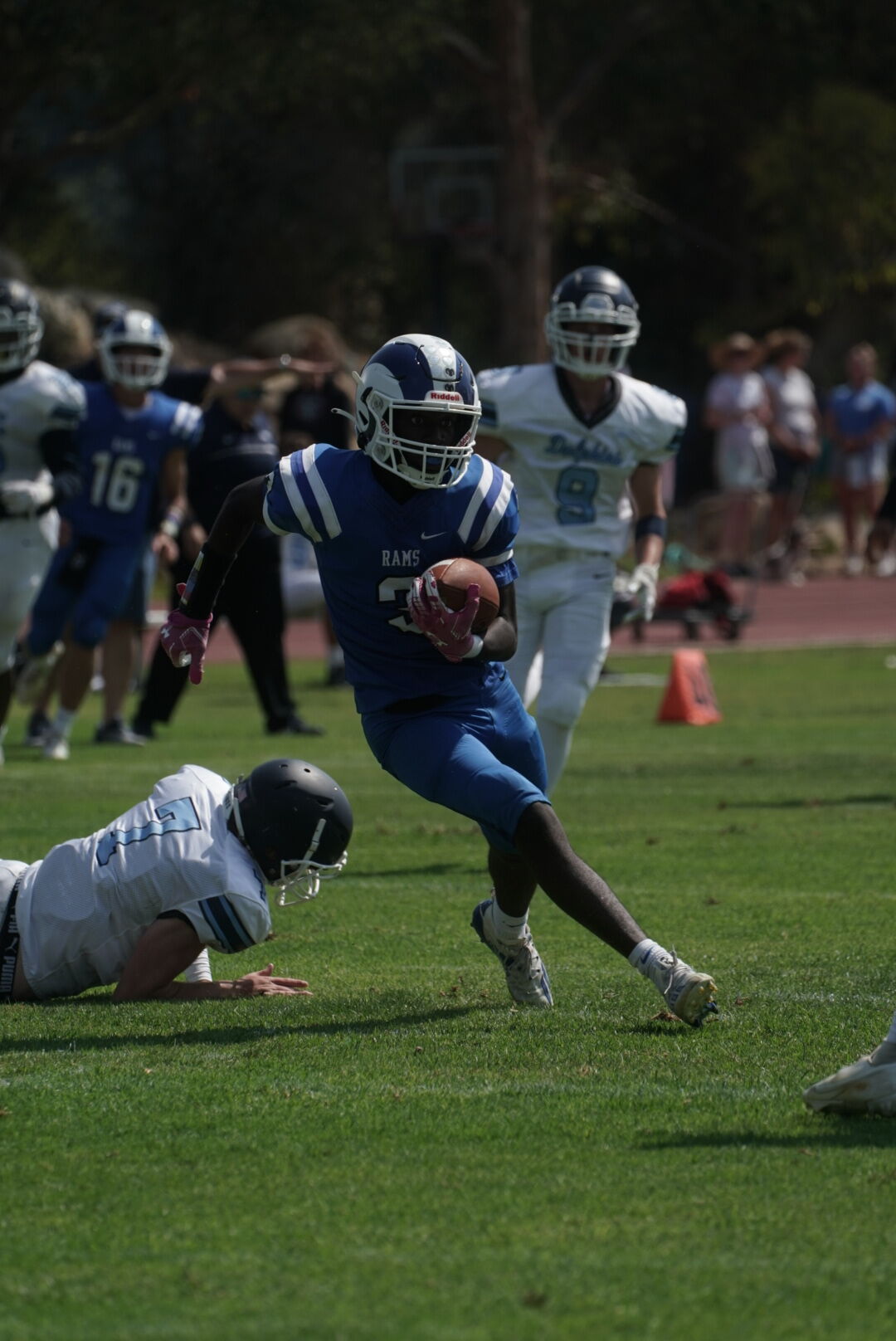 Senior Ethan Ligon has been a big part of Cate’s success.

Carpinteria prepares to receive the serve and seal their third Citrus Coast League win in a row.

Kate Cooney and Belen Herrera show off their hard-earned medals.

Cate star quarterback Will Bouma breaks a tackle for the undefeated Rams.

Senior Ethan Ligon has been a big part of Cate’s success.

Carpinteria’s boys water polo squad has been a force in the pool this season, and cemented its spot at the top of the division CIF rankings with two more wins against Malibu and its first Citrus Coast League opponent Nordhoff.

The Warriors traveled to Malibu for a rematch of an earlier win over the Sharks. Carpinteria showed the first matchup was no fluke, beating Malibu 12-7.

After a slow start due to the Malibu coaching staff adjusting their defense and forcing the Warriors to make perimeter shots, Carpinteria overcame an early two-goal deficit to go into halftime tied 4-4.

“The Warriors began to execute a more efficient driving offense which opened up passing lanes and catch and shoot opportunities,” coach Jon Otsuki said. “Mateo Handall scored two of his three goals in the opening minutes of the third quarter and by the end of the quarter the Warriors had a comfortable 9-6 lead.”

Asher Smith led the team with four goals, followed by Handall’s three and a pair of scores from Gavin Lohuis. Goalie Jacob Taff stayed strong with nine blocks on the day.

Against Nordhoff, Carpinteria senior Zach Isaac exploded to lead the team with five goals en route to a convincing 15-6 win in their first league game of the season. By halftime, the Warriors had a comfortable five-goal lead and never looked back, Otsuki said.

Handall added three goals, while Smith and Reyn Clayton each scored two. Taff had 6 saves in the game.

The Warriors travel to Hueneme Thursday for another league game.

With league play underway, the Warriors’ girls volleyball team has picked up steam with three victories in a row, and two in the last week against Fillmore and Malibu.

Jr. outside hitter Ainsley Andersen led the night with 9 kills and 3 aces.

“Our serving was on point tonight with setter Marlene Sanchez leading the night with eight aces,” coach Bret Shellabarger said. Senior outside hitter Alex Zapata finished with six aces of her own in the win.

Sanchez again dominated at the service line, Shellabarger said, with a season record of 14 ces and four kills. Zapata served six aces and seven kills in the victory.

Carpinteria is 3-1 in league play as they approach the middle of the season. The Warriors head into another week of games against Nordhoff and Santa Paula, followed by the Fall Classic Tournament starting Saturday, Oct. 2.

Both local high school cross country teams competed in the annual dual meet at the Carpinteria Bluffs, with Cate’s third-ranked girls team showing some impressive talent in a Rams overall victory for the day.

Both teams had runners earn times to be proud of; Cate’s star runner Anna Disorbo took first with a time of 21:01, with teammates Francesca Sutch, Emily Allison, Kendall Thorne and Caroline Keohane rounding out the top five.

On the boys side, Cate defeated Carpinteria 23-36. Cate sophomore Seb Sutch came out City Champion with a time of 18:03, and senior co-captain Nick Patrick was right on his heels, finishing second at 18:04.

Cate hosts the Cate Invitational on the Mesa next Wednesday, and the Warriors will compete at the Twilight meet at Lake Casitas on Oct. 6.

Cate football ascends to the top of 8-man football rankings

The Cate Rams have exploded to a 3-0 start to the 8-man football season, averaging 45 points a game in three wins.

In a matchup of the top two teams in the Division 1 CIF rankings, #1 Cate faced #2 Chadwick for a back-and-forth game that ended with two fourth-quarter scores by the Rams to secure a 30-21 victory and another week to an undefeated season.

This was a game that featured the #1 (Cate) vs #2 (Chadwick) teams in the CIF Southern Section. The back and forth scoring affair came to an end with Cate scoring twice in the 4th Quarter to come away with a 30 - 21 victory. With the win, the Rams move to 3-0 on the season.

Star quarterback Will Bouma played another great game, throwing for three touchdowns and sealing the deal with another 49 yard scamper into the end zone with just over two minutes left in the game.

“Senior Will Bouma is something special,” coach Ben Soto said. “Has worked extremely hard to get to where he is and play to the level that he is playing.”

Chadwick was able to keep the game close, and took a 21-18 fourth quarter lead before Bouma and the Rams came back with two more scores.

Cate will face Santa Clarita Christian (0-4) on the road in its next matchup at 4:30 p.m. on Saturday, Oct. 2 in Canyon Country.

Carpinteria football was shutout for the fourth game this season, and the third week in a row with a 51-0 loss at home against an undefeated Mission Prep (4-0) team.

The loss puts the Warriors at 0-5 on the season. They will host Viewpoint for a non-league game at 7 p.m. on Friday, Oct. 1 at Carpinteria Valley Memorial Stadium. Carpinteria will meet a Viewpoint team with a record of 2-2, coming off a 40-0 non-league win over El Monte.