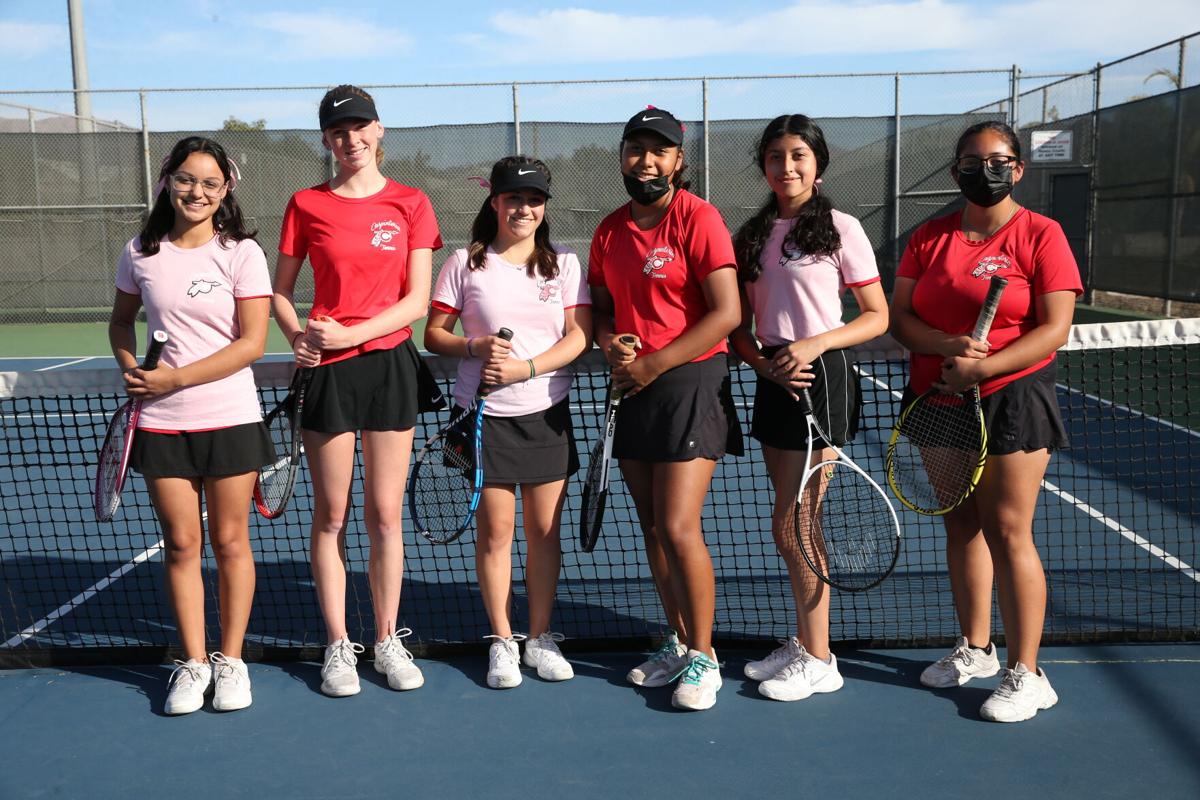 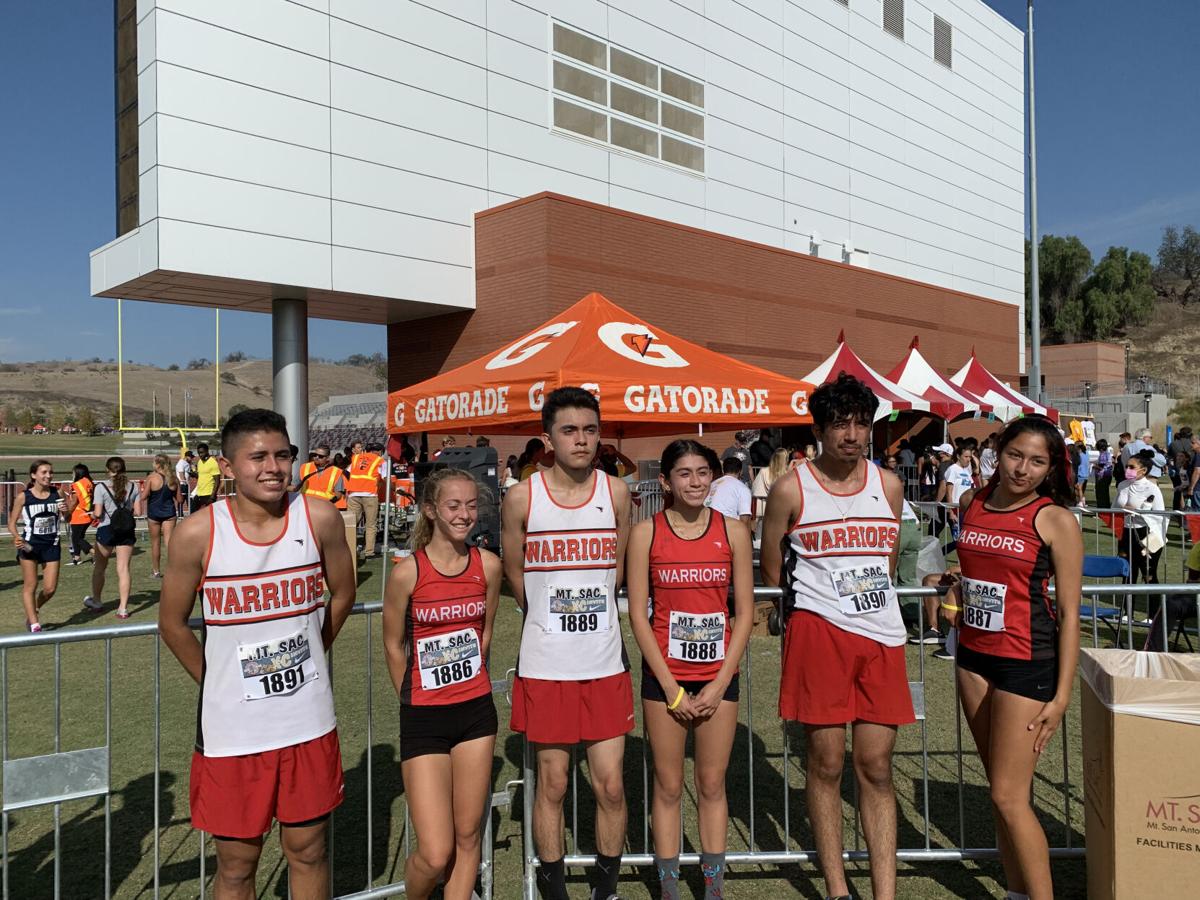 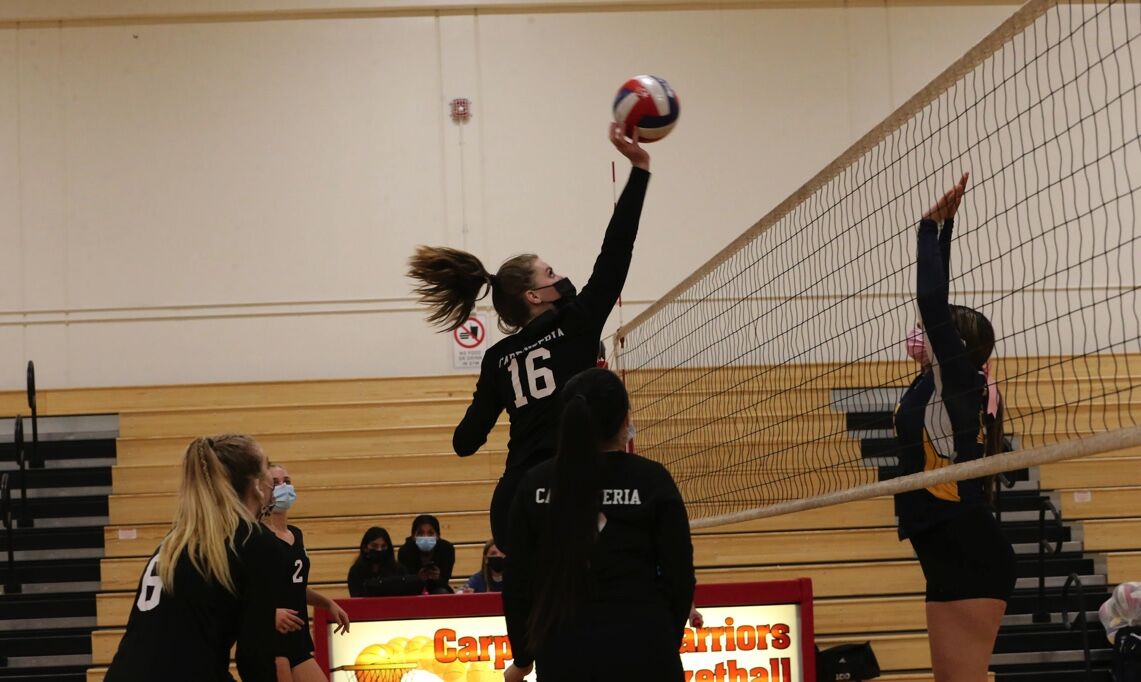 Carpinteria girls volleyball hosted a first round playoff game at their home gym against Santa Clara, but after a competitive five-set contest, it was the visiting Saints who would advance to the second round – closing the doors on a strong season for the Warriors.

Coach Bret Shellabarger helped lead the team to a 6-4 league record, and seniors Alex Zapata and Marlene Sanchez contributed to much of the Warriors’ success in league play.

In the tie-breaking fifth set, the Warriors fought hard but ultimately fell, 11-15, marking the end to the long season.

Warrior outside hitter Ainsley Andersen, who will be returning as a senior next year, finished the night with 12 kills, four aces and 19 digs.

Sanchez served up four aces and 19 digs in what turned out to be her final game on the court for Carpinteria.

“It was an honor to host the first round of CIF playoffs in their home gym,” Shellabarger said. “That’s a wrap for the 2021 girls volleyball season.”

The Warriors’ girls tennis team has played well in Citrus Coast League contests this season, but in the final matchup against Nordhoff for the top spot in the league, Carpinteria fell by a slim margin and slipped to second place.

The competition was so evenly matched that after 18 sets the teams were locked 9-9, and the match was decided by games won (66-65).

“That was very tough to take,” coach Charles Bryant said.

Even tougher, Bryant said, was the injury of one of the team’s senior doubles players, Cassandra Maya Prado, who went down early in the second round. The injury forced the Warriors to retire the match 1-6, which ended up as the team’s only doubles loss of the day.

“We really seemed to struggle in singles. We did not show patience and poise in too many points,” Bryant said.

The Warriors were able to pick it up in the third round, but the large margins proved to be a factor in the loss.

Zahra Porinsh was the only set winner on the day and kept the team in the match through to the last round. It was the Warrior’s second loss in a row after jumping out to a strong start of league play.

“We will have to put these last two matches behind us and quickly too,” Bryant said. “A great learning experience but at a very costly time as it cost us the league championship.”

“Natalia has been absolutely amazing and has been an incredible leader these past two seasons.”

Carpinteria finishes the regular season at 12-6 overall and 8-2 in the Citrus Coast League.

Carpinteria’s football team struggled to put points on the board, and was shutout for the seventh time this season against Citrus Coast League leader Hueneme, who stayed undefeated in league play with the 48-0 victory.

The Vikings are now 7-2 overall, and 3-0 in league, and will now prepare for a strong Nordhoff squad.

Carpinteria is now 0-9 for the season, and will take to the road for their final game of the year against Santa Paula on Friday, Oct. 29.

Athletic Director Pat Cooney said that the event is one of the longest running cross country meets in California.

“The Mt. SAC Invitational has become a right of passage for more than a hundred thousand over its 73-year history, as its grueling, hot, and hilly three-mile course leaves runners exhausted and thirsty,” Cooney said.

The team’s next meet will be the Santa Barbara County Championships at River Park in Lompoc.

Cate suffers first loss of the season in last-minute thriller

After a magical start to the season with six wins in a row, the Cate Rams dropped a heartbreaking 44-40 loss to rival Thacher in Ojai.

“The game came down to the last two minutes,” coach Ben Soto said.

After going into halftime trailing by four, the Rams came back and built a 10-point lead with 2:30 to play.

“We showed a lot of heart,” Soto said. “Unfortunately, we just made too many mistakes down the stretch. We will grow from this game and look to end the regular season strong next week.”

The Rams are now 6-1, and will close out the regular season on Saturday, October 30 against Malibu. The home game will start at 2 p.m. at Cate.