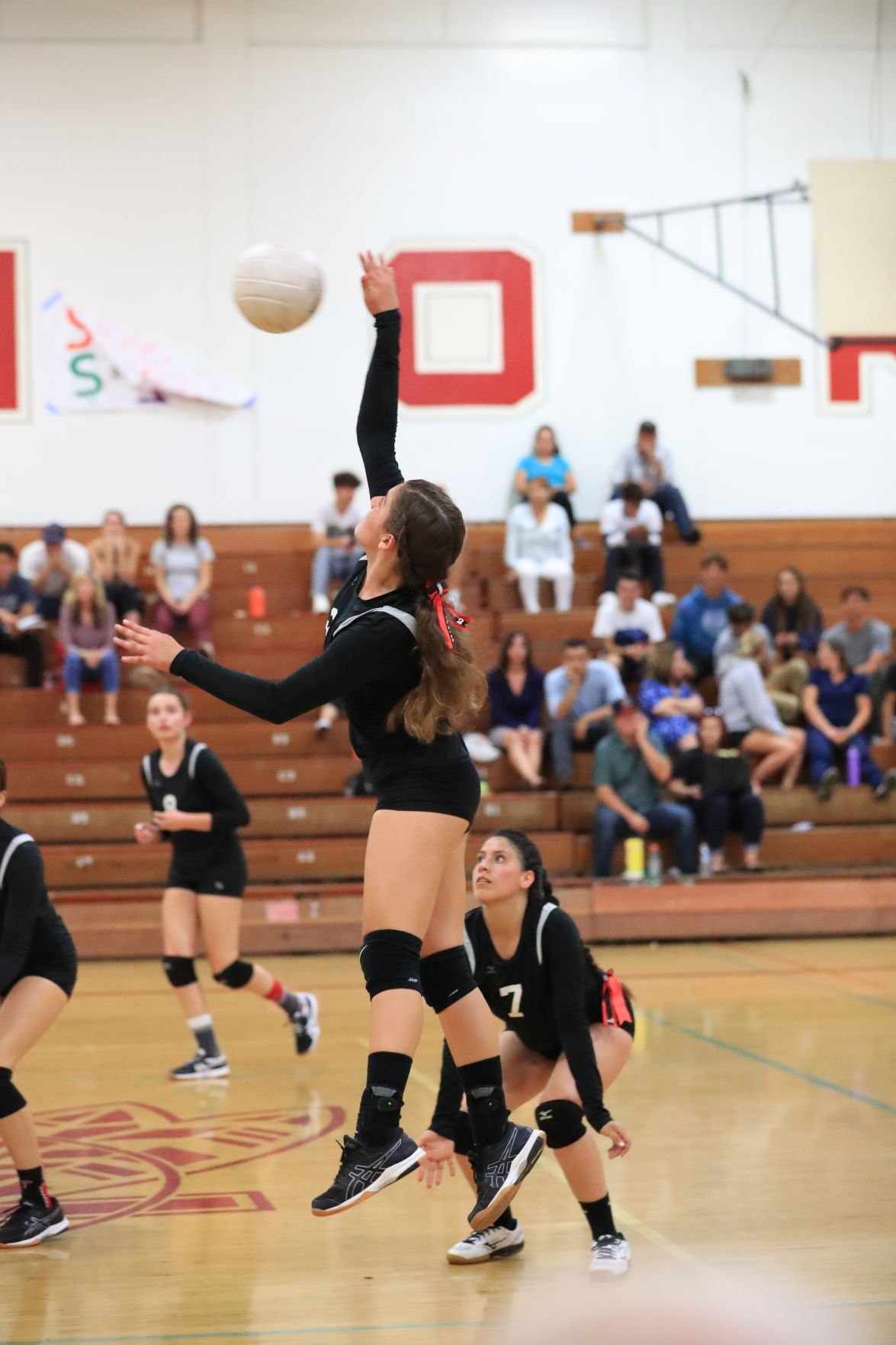 Malia Shellabarger goes up for the hit against Bishop. 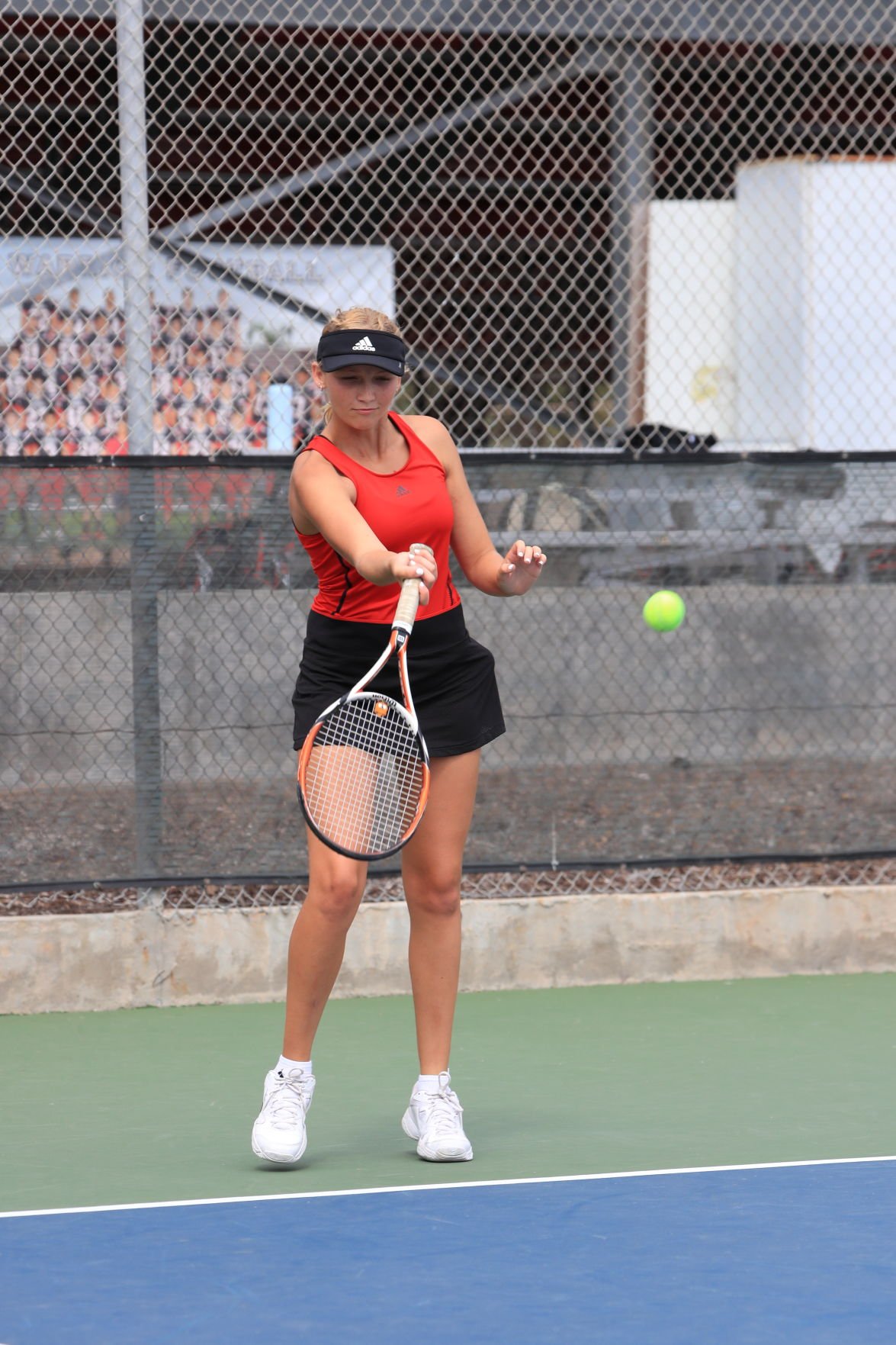 Lexi Persoon swings it on the home court. 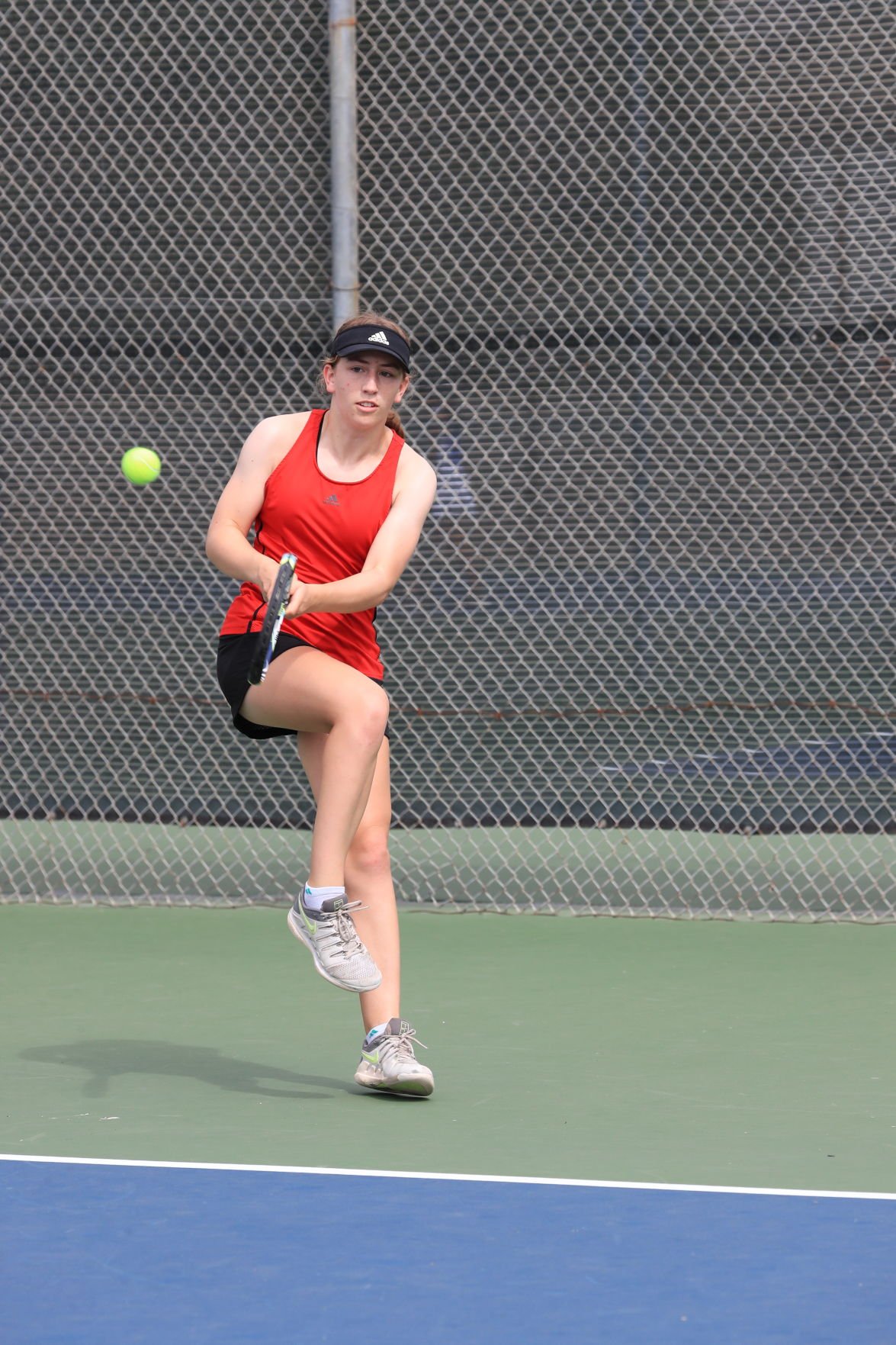 Emma Lapidus swings it on the home court.

Malia Shellabarger goes up for the hit against Bishop.

Lexi Persoon swings it on the home court.

Emma Lapidus swings it on the home court.

September 10 – The Carpinteria High School boys water polo team hosted Villanova for their first of two scheduled games this season. The first quarter saw the Warriors go ahead 3 to 1. As the quarters went on, the Warriors extended their lead, concluding the game with a 17 to 8 victory. Senior Nathan Endow scored two goals for the Warriors, and “Sophomore Ben Persoon shut down pass after pass on defense, creating several offensive openings with his speed,” said Carpinteria coach Sergio Castaneda. The Warriors will face Cabrillo this Friday, Sept. 20, at the Carpinteria Community Pool. Carpinteria is now 3-3 overall and have yet to begin Citrus Coast League play.

September 10 – The Carpinteria High School girls volleyball team faced off versus known rivals, the Bishop Diego Cardinals. With match scores of 27-25, 25-23 and 25-20, the girls from Santa Barbara managed to sweep the Warriors, 3-0 in games. “It was a very exciting match to watch from beginning to end,” said Carpinteria coach Dino Garcia. “The Warriors had Bishop right where they wanted them, however, a few critical errors cost Carpinteria set one and two,” Garcia said. Starting outside hitter Number-two Malia Shellabarger yielded five kills, two aces and 10 digs. Libero, Number-14 Emily Montoya picked up 24 digs. Sophomore and setter Number-seven Marlene Sanchez ended with 21 assists. The Warriors are now 2-3 overall.

September 17 – The Carpinteria High School girls volleyball team hosted Garden Street Academy for a Monday evening volleyball match, and swept the match 3-0. “Carpinteria played consistently and was able to stop Garden Street Academy’s go to hitter in the third set,” said Warriors coach Dino Garcia. Number-eight opposite Sarah Weitzman stepped in as setter because Marlene Sanchez was sick. The Warriors will host the Malibu Sharks Tuesday, Sept. 24, for their second league match of the season. Carpinteria’s overall record improves to 3-4 and are 0-1 in Citrus Coast League play.

September 10 – The Cate School girls volleyball team played its first match of the regular season, coming away with a sweep of Garden Street Academy, 3-0. “Freshman players Tatiana von Bothmer and Gigi Geyer excelled on the outside, adding to the successful match,” said Rams coach Greg Novak. “The match was a good introduction to the season and a tune-up for the first tough league match against Foothill Tech.”

September 11 – The Cate School girls volleyball team in their first match in the Tri-Valley League beat Foothill Tech, 3-2. “Senior setter Maya Blattberg ripped several balls down line and Foothill’s libero was there to pop up the ball for an eventual point conversion,” explained Rams coach Greg Novak. Sophomore middle Chidera Chukwumerije led the team in kills with 17 and a hitting percentage of .481. Elise Guerrand-Hermes followed up with 14 kills and Blattberg added 11 kills. Charlotte Weis had five aces off of 19 serves. Libero Grace Blankenhorn had 31 digs and passed a 2.38 on serve receive. “Grace Blankenhorn chased a ball down to the back wall and Grace Johnson managed to send the free ball at least 60 feet across the gym, deep into Foothill’s court which resulted in the match winning point for Cate—a nice way to end the match indeed,” said Novak. Cate is 8-1 overall, 1-0 in the Tri-Valley League.