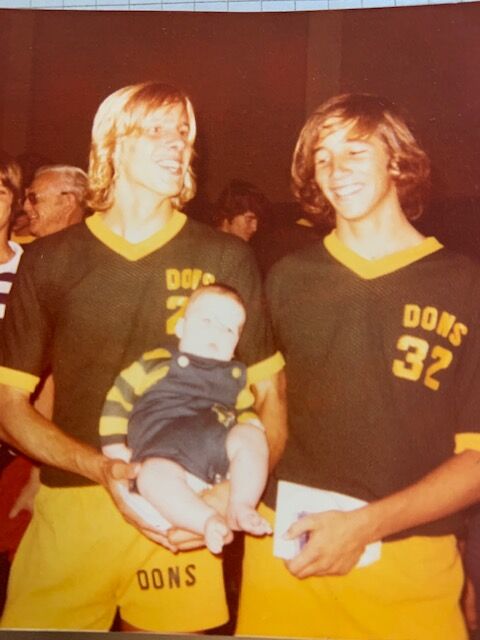 A photo of Shawn Olmstead as a baby being held by future Olympian Karch Kiraly and another Santa Barbara volleyball legend, John Hanley. 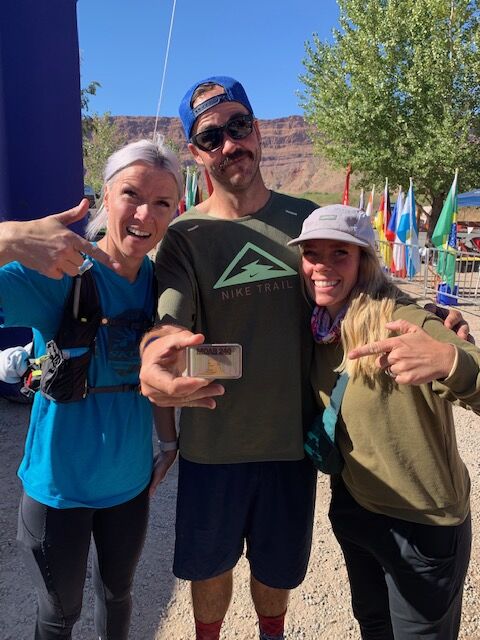 From left, Farrah and Shawn Olmstead are with their friend and pacer Stephanie Olson finishing the MOAB 240 run. 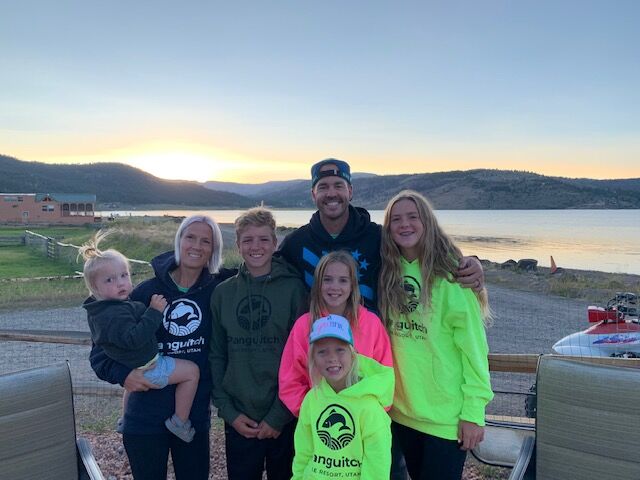 The Olmsteads gather for a family photo, back row, from left, June, Farrah, Evan, Shawn and Raegan, and in front, Mayci and Wesly.

A photo of Shawn Olmstead as a baby being held by future Olympian Karch Kiraly and another Santa Barbara volleyball legend, John Hanley.

From left, Farrah and Shawn Olmstead are with their friend and pacer Stephanie Olson finishing the MOAB 240 run.

The Olmsteads gather for a family photo, back row, from left, June, Farrah, Evan, Shawn and Raegan, and in front, Mayci and Wesly.

Shawn Olmstead’s relationship to the sport of volleyball rivals that of a ‘90s Disney sports movie. Ever since he was a kid, Olmstead has always had some notion of contact with the sport. This should come as no surprise seeing that his father, Rick Olmstead, was a championship winning coach at Santa Barbara City College and at one point in his career, coached a three-time Olympic gold medalist, Karch Kiraly.

It was common for his father to take Olmstead to the beach on the weekends to play beach volleyball, or to take him to one of his games at SBCC, but it wasn’t until his junior year of high school that Olmstead’s career in volleyball really started.

Prior to his junior year, Olmstead played club volleyball in Santa Barbara, because at the time, Carpinteria High School (CHS) didn’t have a boys volleyball program. As his junior year drew closer, Olmstead had to make a decision—either transfer to Santa Barbara for high school in hopes of playing on a school team, or risk his dream of playing college volleyball and try to help create a program at CHS. He stuck with CHS.

Olmstead gathered a group of guys from a multitude of other sports, and created a league dominating team. He was named most valuable player and set a school record for most kills in a match. “It’s not surprising that we were competitive because volleyball is a big part of that community,” said Olmstead.

After two dominating years at CHS, he was picked up by Brigham Young University (BYU), where he continued his volleyball career. “At BYU, I was a part of two national teams and played in three national finals. We lost one and then won two championships in 2001 and 2004,” said Olmstead.

After graduating from college, Olmstead transitioned from player to coach. “With the guidance of my dad and other coaches I’ve had in my life, I was able to make a pretty quick transition as a coach,” said Olmstead. “Someone that helped and coached my dad’s team in Hawaii ended up being the head coach here at BYU… Carl McGown… he knew I wanted to coach and he took me under his wing.”

Olmstead learned as much as he could from McGown, who was one of the most awarded coaches in the country. Olmstead spent his summers running training camps and clinics with McGown, picking his brain any chance that he could. Soon, Olmstead was picked up as an assistant coach for BYU’s women’s volleyball team.

For the next few years, Olmstead did his best to support the head coach, but the team was under preforming in the eyes of the school. That’s when the university decided to offer Olmstead the head coach position of the women’s volleyball team. Although loyal to his head coach, Olmstead saw the opportunity and took it.

As the head coach of the women’s program, Olmstead breathed new life into the team, going from a 15 to 15 win/loss record as an assistant, to a 21 and 9 win/loss record as head coach. In 2014, Olmstead took his team all the way to the championship match at the NCAA tournament which was a first in the program’s history.

From there, Olmstead was asked to become the lead coach for BYU’s men’s volleyball team. He accepted the offer, opening the position of head coach for the women’s team, which his sister, Heather Olmstead, his assistant coach at the time, was ready for. Like her brother, as coach, Heather had success, taking her team to the NCAA finals every year since she started as head coach. She also won the 2018 America Volleyball Coaches Association National Coach of the Year Award.

Olmstead has coached for the BYU men’s volleyball team since 2015. In that time, he’s taken the team to NCAA Tournament championship matches in back-to-back seasons (2016-2018). Prior to Covid-19, his team was slated as the number one team in the nation, but the season was cut short due to the pandemic.

With all that being said, one would think that Olmstead’s historic volleyball career would be his highest achievement, but Olmstead said that completing the MOAB 240 endurance run is. The run sees competitors running 240 miles over the span of five days.

“Honestly for me, it was the greatest sporting achievement that I’ve been a part of, and it might not sound correct because I’ve won national championships and done the same with my teams,” said Olmstead.

Olmstead hopes to one day return to Carpinteria. “My heart is in Carpinteria Valley, in that community and those relationships I have back at home,” said Olmstead.