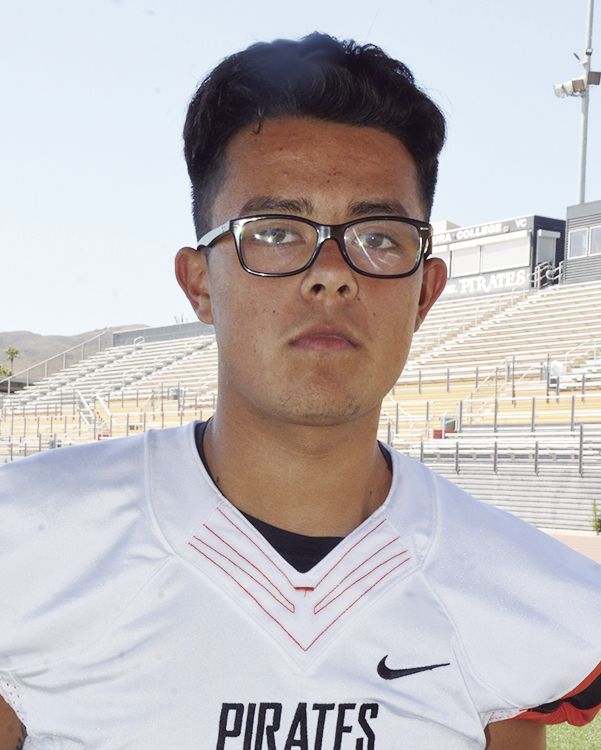 In his starting position of placekicker for the Ventura College Pirates, Alberto Arroyo prepares one of his powerhouse kicks. 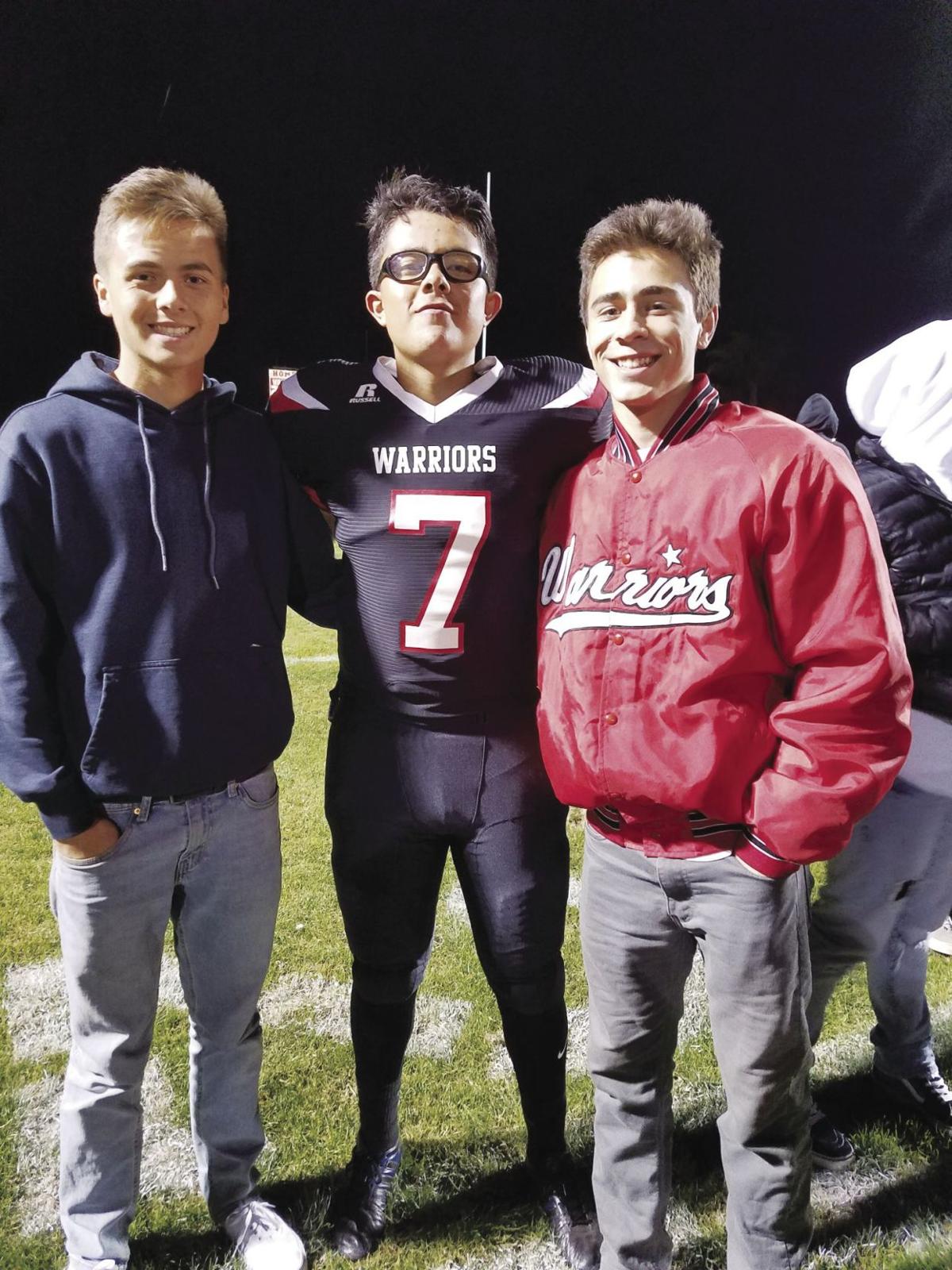 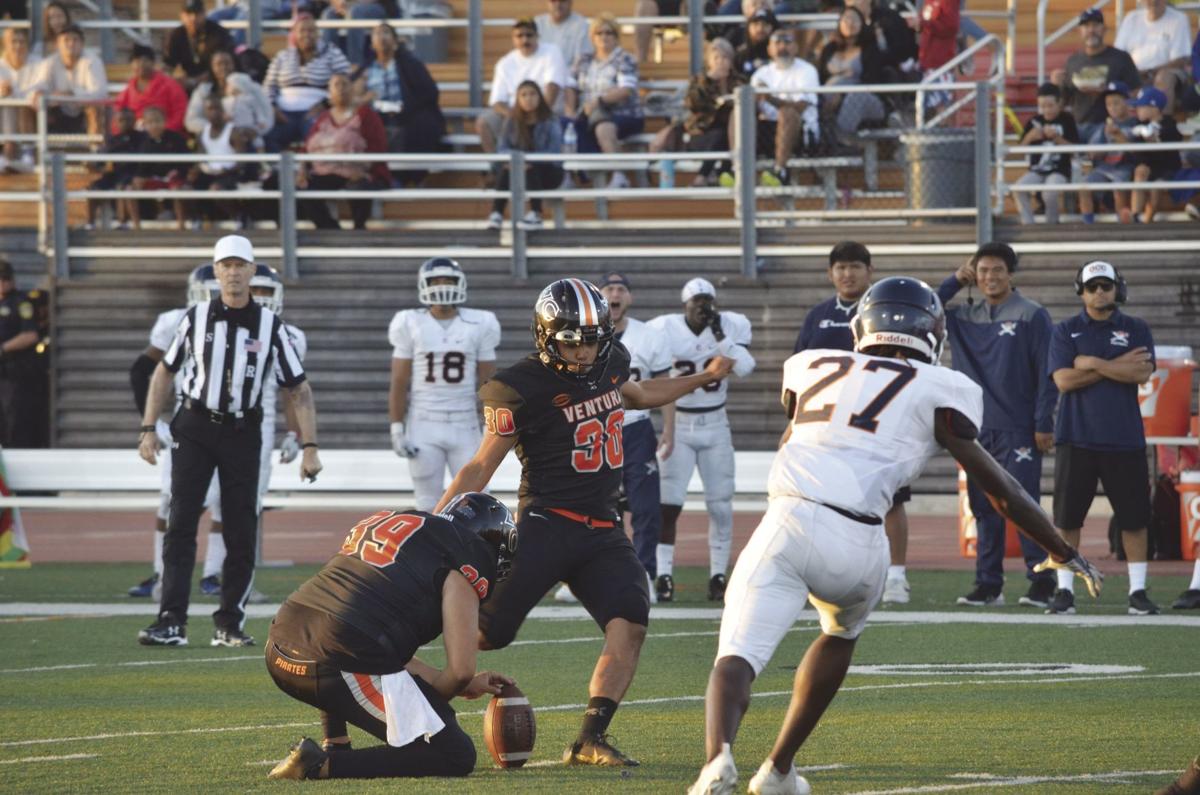 Arroyo, pictured in his Ventura College Pirates jersey, played soccer from the time he was four, but he found his passion on the Warriors football field when he was a sophomore at Carpinteria High.

In his starting position of placekicker for the Ventura College Pirates, Alberto Arroyo prepares one of his powerhouse kicks.

Arroyo, pictured in his Ventura College Pirates jersey, played soccer from the time he was four, but he found his passion on the Warriors football field when he was a sophomore at Carpinteria High.

Former Carpinteria High School football placekicker Alberto Arroyo looks to have his career on the fast track. Last year, Arroyo performed the kicking and punting duties for the Warriors. This year, he brought his skills to Ventura College where it was announced last week that he and teammate Terrell Vaughn were both named to the All-American team. “My goal has always been to (play) in the NFL,” said Arroyo.

Nicknamed “Tito,” Arroyo didn’t play organized football until his sophomore year in high school. But having played soccer since he was a youngster with AYSO, he had built a skill set that easily transferred over to the gridiron. One day Arroyo was kicking the ball with a friend at the stadium and some Warrior football coaches approached him asking if he’d like to join the team. With the approval of his parents, Alberto, Sr. and Alejandra, he joined.

Arroyo also played soccer for the Warriors as part of the Division Five CIF State Regional championship team of 2018. However, after that season, he decided that his future would be better served with football. “In the beginning of my senior year during soccer, I talked to my parents in detail and they agreed with me to stick with football because that’s kind of a main thing here in the U.S. compared to soccer,” said Arroyo.

On the Ventura College field he was joined by Warrior classmates Brady Sturdivan and Michael Garibay (Class of 2016). And he faced some stiff competition. “There were eight of us competing for that (placekicker) spot when I first got there. I was thinking I was going to be a red shirt,” said Arroyo of the term used for a player who sits out the season—often the case for freshmen trying out for the team. But with some coaching from Steve Sanchez, a punter and holder on the squad, Arroyo ended up winning the starting job.

In a game last fall at Bakersfield, playing for the Ventura College Pirates, Arroyo kicked five field goals and converted two extra points in a 29-21 win. “Just knowing all the pressure is on me, there was nothing that I really could think of, I was speechless when I also heard that I broke a record that game,” said Arroyo. His five boots through the uprights set a Pirate record for field goals in one game.

It was a record-breaking season for Arroyo, as he set the single season record at the college for points by a kicker with 115. He also claimed the record for the most field goals made in a season with 21. “Just having my family support me the whole way made it so much easier for me to be able to concentrate on practice, like perfecting my technique,” explained Arroyo. The Pirates also had another outstanding year. They ranked Number-10 in the state in the final coaches’ association poll.

At Ventura College, Arroyo is studying for a degree in kinesiology and plans to kick again next year. He’ll then look to move on to a four-year school where he can also utilize his kicking abilities. “I always have to take it step by step. I’ll focus on college, I’ll focus on what’s after that, but the NFL’s the goal,” said Arroyo. And, at the rate he’s going, the next time you turnaround, you may see him playing on Sunday.