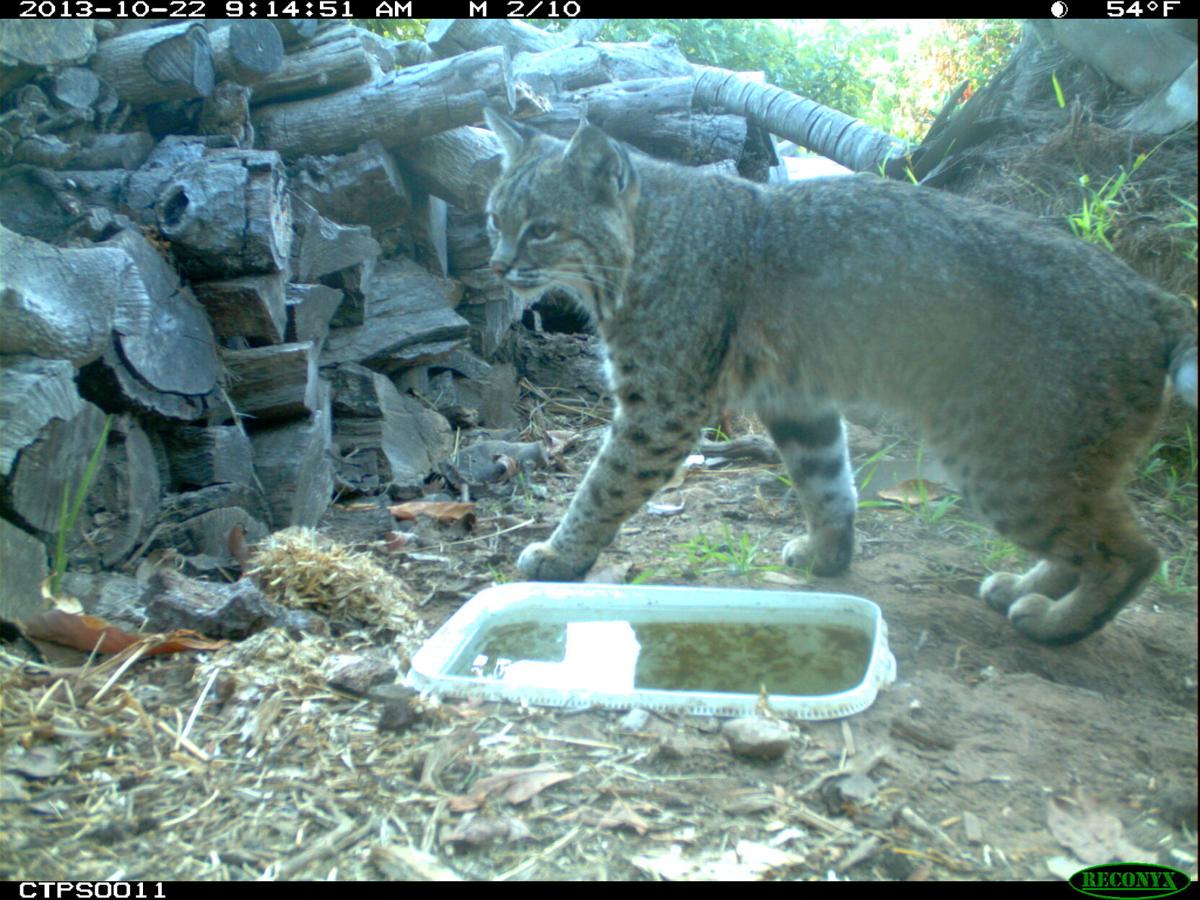 Since 2013, a beautiful bobcat is a regular visitor for water near a motion-activated wildlife camera that author Nancy Baron has set up. He or she comes at all times of day but is always stealthy. 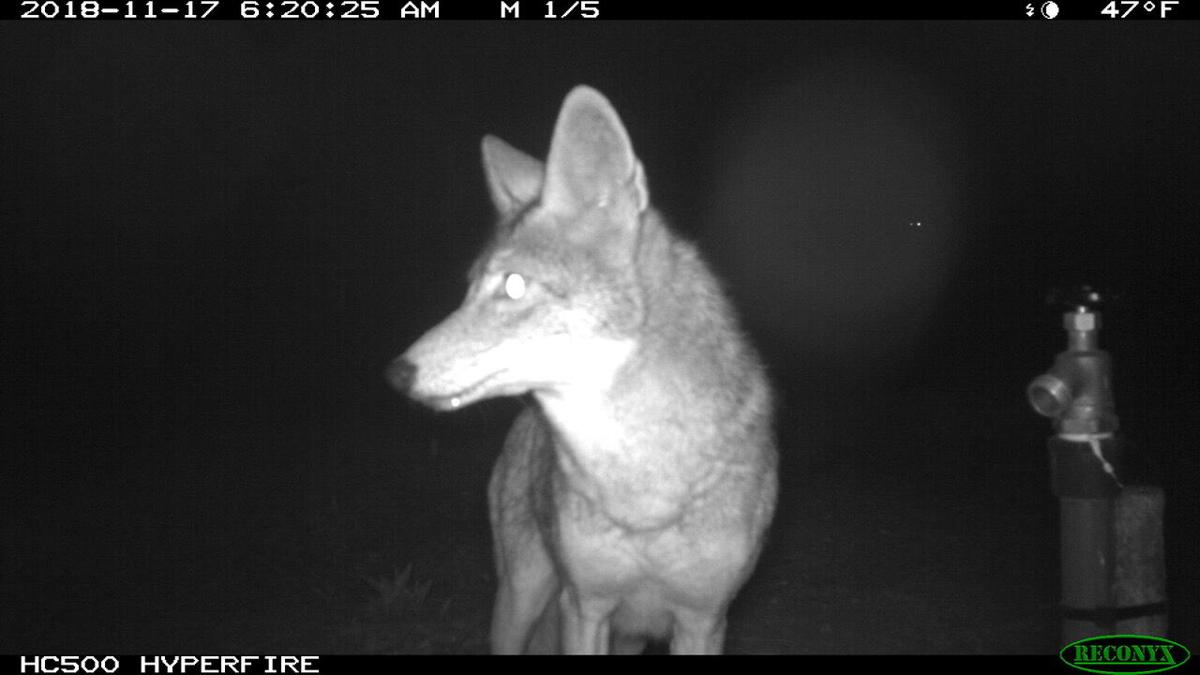 Coyotes are typically active at night.

Since 2013, a beautiful bobcat is a regular visitor for water near a motion-activated wildlife camera that author Nancy Baron has set up. He or she comes at all times of day but is always stealthy.

Coyotes are typically active at night.

One of my favorite things is to sit at the kitchen table with my husband Ken, and review the images captured on our motion-activated wildlife camera. These photos, as they pop up on the computer screen, reveal animals that I rarely see because they mostly move under the cover of darkness. Others are more familiar. All are animals whose daily activities include a visit to the watering holes we provide. Some photos are better quality than others, but they all tell stories about the animals around us.

Water is the biggest draw for wildlife. Birds crowd the bird bath and fountain, splashing about. The more secretive animals avail themselves to the water-filled buckets we bury lip-deep in the soil behind the garage or tuck under the canopy of a tree.

We position the wildlife camera, often called a camera trap, by one these watering holes, usually lassoed to a log. Then we wait, eager to see who goes there.

Over the years, we have been astonished at the parade of wildlife. Bobcats, coyotes, grey fox, opossums, skunks and raccoons quickly find these sources like watering holes in the Serengeti.

As much as the animals loved it, an embedded bucket in the soil was hard to keep clean. Raccoons leave dirty water from their nocturnal paw washing. Algae grew on the sides. Keeping the water clean (importantly) was a chore. I had to bail the bucket out, then scrub and bail again before refilling. I have since discovered that a shallow pot filled with water that can be easily dumped, scrubbed and refilled is easier. I usually place a stick poking out of the water, to help lizards and other small thirsty creatures climb to safety, if they fall in.

Eventually, we dug out a little pond to provide a more reliable water source. We have added adjacent perches atop 20-foot poles, that are frequented by hawks, bluebirds, woodpeckers and other birds.

Our first camera trap was given to us by a wildlife biologist friend who organized a massive study using these cameras to count cryptic animals in tropical forests in Africa, Asian and Latin America. The images captured by Tropical Ecological Assessment and Monitoring (TEAM) determine the number and diversity and animals and, incidentally, exposed poachers. The latter images proved to be of interest to park wardens and wildlife authorities. The cameras work by having a beam that detects movement and triggers the camera. A startled expression staring at the camera is common. Camera traps are now commonly used to study wildlife.

At our home too, there are discoveries – laughs, tears and plenty of surprises.

The camera trap reveals birds that we seldom see, like roadrunners. The photos may only capture a body part, but it’s often unmistakable which bird or animal has made a cameo appearance.

From my kitchen window I watch daytime animals come and go to water. But the camera trap captures moments we miss, and the night visitors. The unfurling photographs offer intimate portrayals of animal behavior. There’s plenty of scrapping and jockeying, but also tenderness, courting and comradery among many animals.

I was surprised to see how vultures gather together on the edge of the shallow pond then wade in together for a communal bath – rub a dub dub. They soak their feathers, drink deeply and spread their wings to dry. Then competing for the best drying perches, they unceremoniously push each other off, like in musical chairs.

Other animals drink and bath at night. Barn owls wade in, hoisting their feathered legs like pantaloons, then splash about.

Occasionally we see sad things, like a very sick coyote. This animal was a walking skeleton with almost no fur and desperate for water. Sarcophagic mange is often a secondary result of predators eating poisoned rats or other prey. The poison compromises their immune system and enables mites to overrun them. They die slow, agonizing deaths.

Most often however, the camera reveals wonderful glimpses into the lives of the wildlife around us. Every time I go away, I can’t wait to get home and see what the camera has captured.

Putting out water, especially in these times of drought is an extremely helpful thing you can do for wildlife. If you rake sand around the water container you may observe tracks that reveal who has gone there.

Nancy Baron is a naturalist, and author of Escape from the Ivory Tower and Birds of the Pacific Northwest. She and her writer husband live on a small organic avocado ranch where they share their naturehood with as much wildlife as possible. You can reach her at baron@nceas.ucsb.edu.