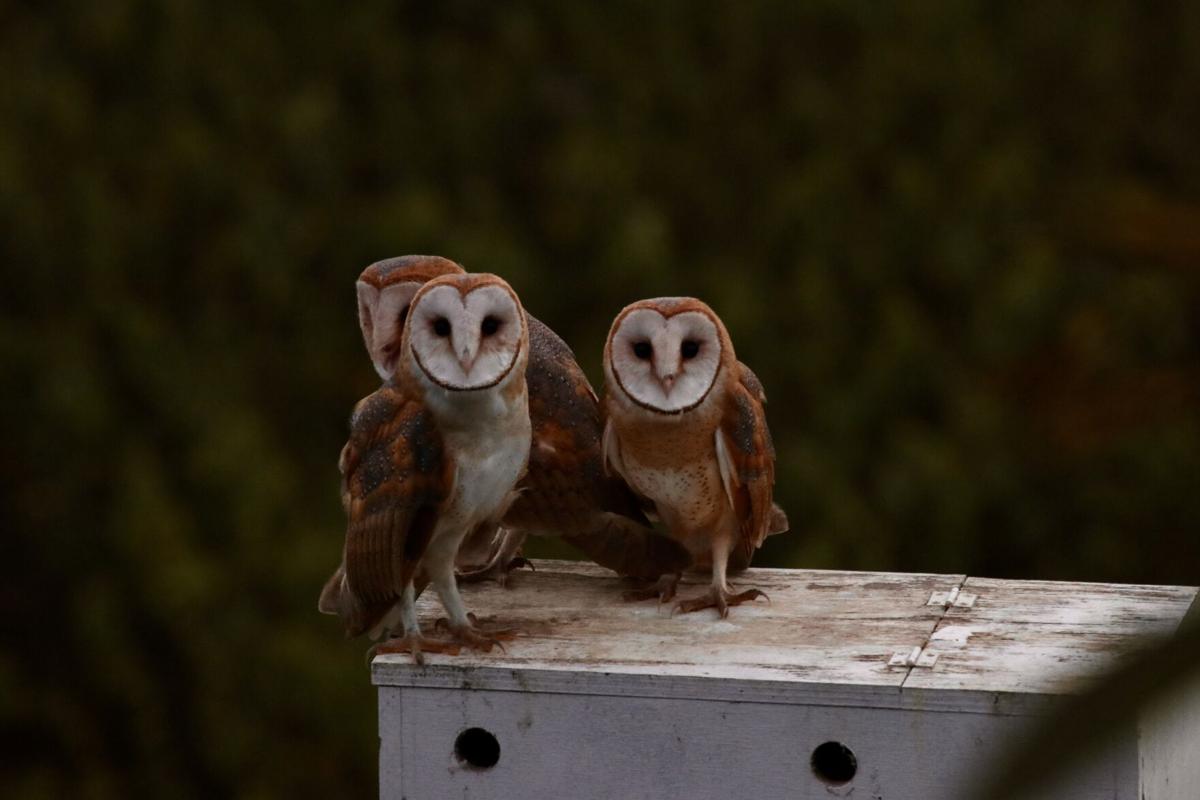 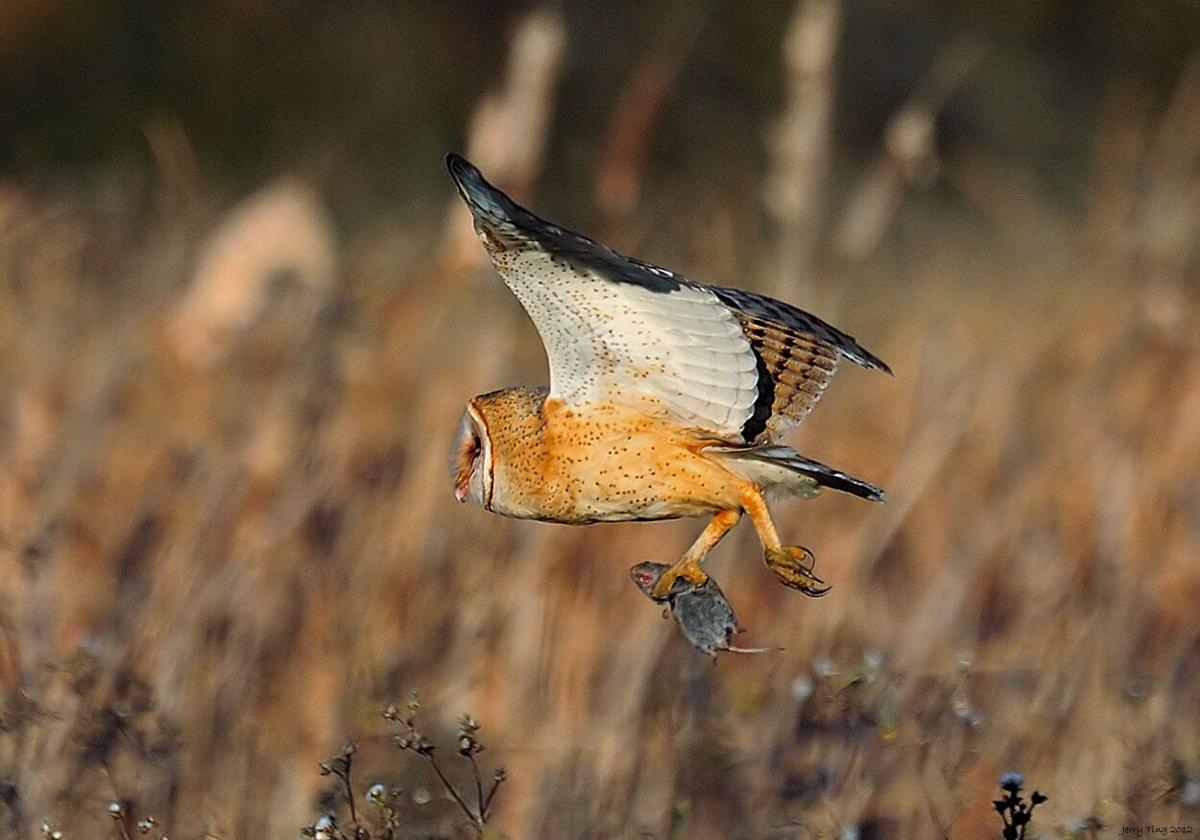 Barn Owls capture rats, gophers and voles to feed their families. Farmers encourage their presence with owl boxes and perches. 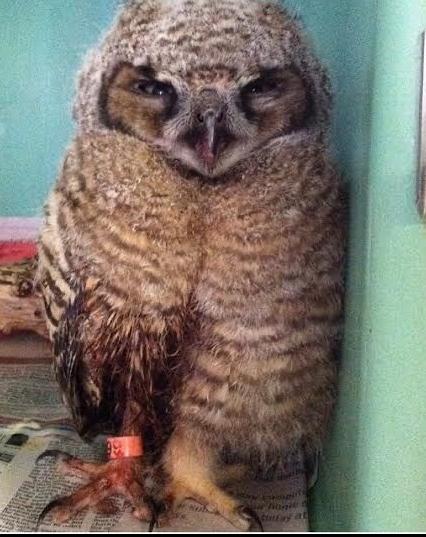 This Great Horned Owl chick was fed a poisoned rat. Second generation rodenticides cause animals’ blood to thin and seep out of its body, killing them. 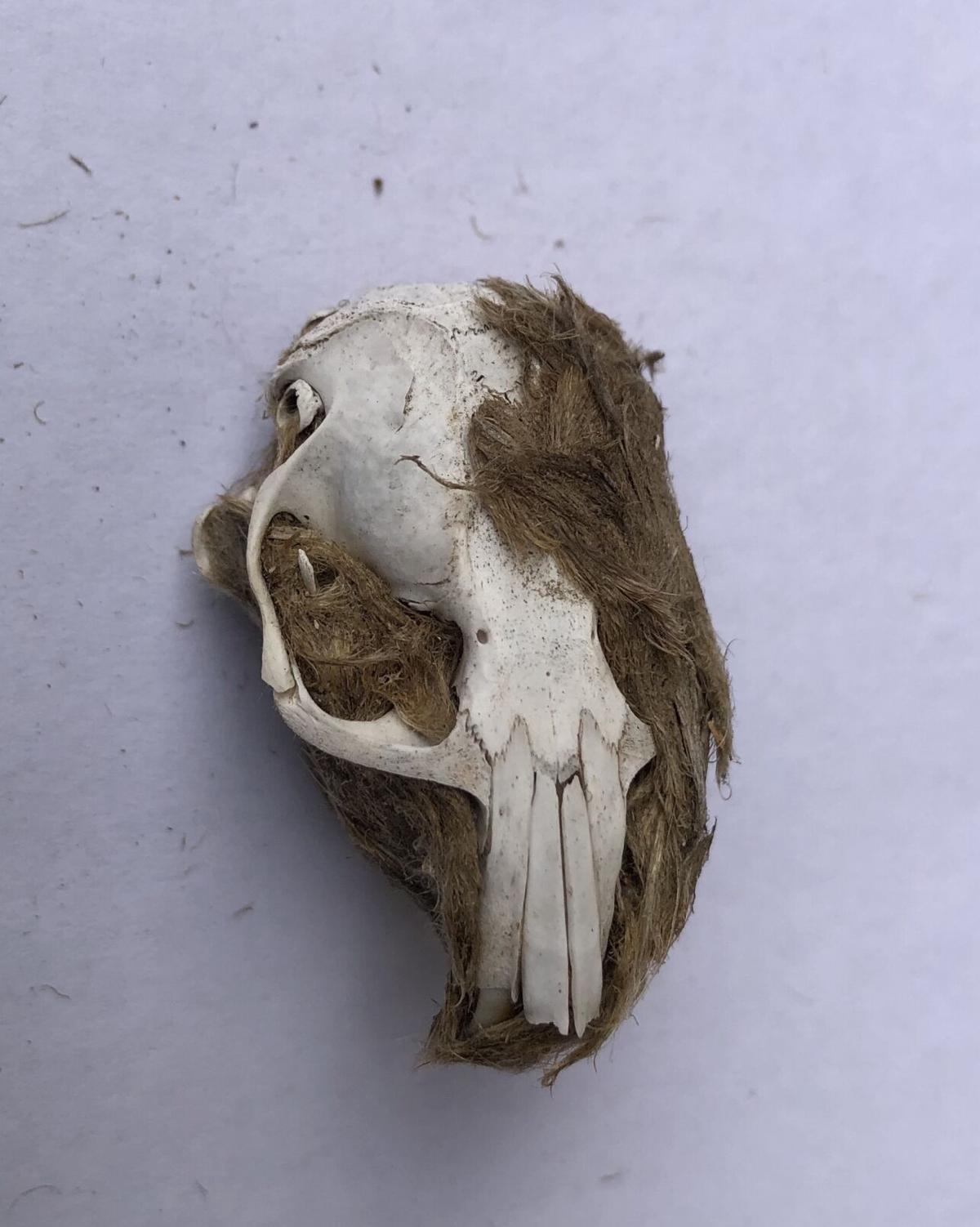 Owls regurgitate pellets that contain the bones and fur of their prey—like this rat skull.

Barn Owls capture rats, gophers and voles to feed their families. Farmers encourage their presence with owl boxes and perches.

This Great Horned Owl chick was fed a poisoned rat. Second generation rodenticides cause animals’ blood to thin and seep out of its body, killing them.

Owls regurgitate pellets that contain the bones and fur of their prey—like this rat skull.

It’s owl season. At dusk and dawn listen for the sounds of male and female Great Horned Owls duetting back and forth.  Or if you hear a raspy shriek, look for a Barn Owl floating by on moth-like wings. This is the time of year owls are bonding with their mates and looking for nesting sites.

Each evening, from our perch in the hills above Carpinteria, we hear both the hooting calls of the Great Horned Owls and the screeches of Barn Owls. Barn Owls are particularly noisy during courtship. He screeches and flies after the female and she screams back. He brings her gifts of rats and hovers in front of her with his feet dangling.

Barn owls are medium sized owls, but their long wings make them appear larger. They have a heart shaped monkey face and cinnamon colored feathers, although in the darkness they appear white. Their buoyant moth-like flight is beautiful to watch.

At dusk, ghostly Barn Owls drop from the beards of palms where they roost – and begin their night patrols for rats and gophers.

Stealth is an owl’s weapon. Their flight feathers have combed edges that allow them to swoop silently upon their prey. No whooshing of wings!  The Barn Owls fly past our deck like phantoms searching the orchard and meadow for rodents. They can hear their prey in total darkness, even hidden in vegetation.

Owls do major work for farmers like my husband, who has a small organic avocado orchard. Instead of using rat poison we encourage owls and hawks to control rat populations. To attract them, we have built owl boxes and perches from which they can hunt.

Last year, two Barn Owl chicks fledged,  and the year before there were four. We know this because once the owlets get close to flying, they climb out of the box each night and sit on top, going Pshhht. Pshhht. Pshhht, which seems like the owlish equivalent of “Feed me, feed me, feed me,” cheering on their parents in the rat hunt. Barn Owls kill as many as three rats per night each, and a nesting pair can take an additional two rats for each owlet. Some estimate the average Barn Owl family eats 3,000 rodents during a breeding season.

During courtship, the males offer their females more rats than they can eat to show their hunting prowess. In nesting season, before the eggs hatch, they will stockpile dozens of killed rats in anticipation of their hungry young. The dutiful male delivers the rats to the female, who feeds the young. He eats last.

Ironically, the birds of prey like owls and hawks that help control rat populations are also prime victims of second-generation rat poisons—like d-CON, Hombre and Contrac.

The first year we erected an owl nesting box, the four owlets died, due to being fed poisoned rats. Most of the farms around us are organic. But even one house that uses rat poison can kill off these helpful predators in the surrounding area.

In our neighborhood, more and more people are aware of the dangers of rat poison to wildlife and pets and the advantages of encouraging raptors and other wildlife which naturally control rodent populations.

Animal rescuers refer to rat poisons as ‘weapons of mass destruction’ because they not only kill rats but other wildlife and pets that consume the poisoned rats. The second-generation rodenticides contain blood thinners which kill up the food chain, causing predators and scavengers to bleed out. It’s a horrible death.

Some encouraging news: Governor Gavin Newsome recently signed AB 1788, which bans the use of second-generation poisons, with a few exceptions. I spoke to Lisa Owens Viani who started Raptors are the Solution or RATS. Viani has been working on this issue for over a decade.

Her website, raptorsarethesolution.org, is a trove of information including pest control companies that use methods that are wildlife friendly and helpful advice.

“Rats hate cayenne pepper because they pick it up on their feet and then lick them,” she told me.  “You can sprinkle cayenne on their pathways or nest sites. You can use it in compost bins, bird feeders and chicken coops; it will not harm or repel birds or chickens.”

Some communities like Malibu and Marin are poison-free communities. Others are beginning to follow, as awareness increases of the dangers of poisons and the benefits of encouraging owls and other predators.

Barn Owl pairs stay together throughout their lives. They are especially helpful to farmers and vineyards because they don’t mind other Barn Owl neighbors as long as they have enough nesting sites and rodents to eat. They need cavities which are hard to find—or barns—even harder. But they will readily use Barn Owl nesting boxes if they are correctly situated.

Last weekend, we cleaned our boxes, getting rid of the many pellets of bones and fur, and replacing soiled wood shavings with new.

I am looking forward to seeing a Barn Owl sitting on the box at night, staring back at me, knowing that a family is soon to follow.

The Ojai Raptor Center sells owl boxes and also has free plans for how to build them. For more information, visit ojairaptorcenter.org.

Nancy Baron works as a communications coach for environmental scientists. Last week she led a virtual panel with top climate scientists at Penn State discussing how to “Communicate Climate in a Complex World.” https://t.co/qiXWPu4pGU Nancy can be reached at baron@nceas.ucsb.edu.