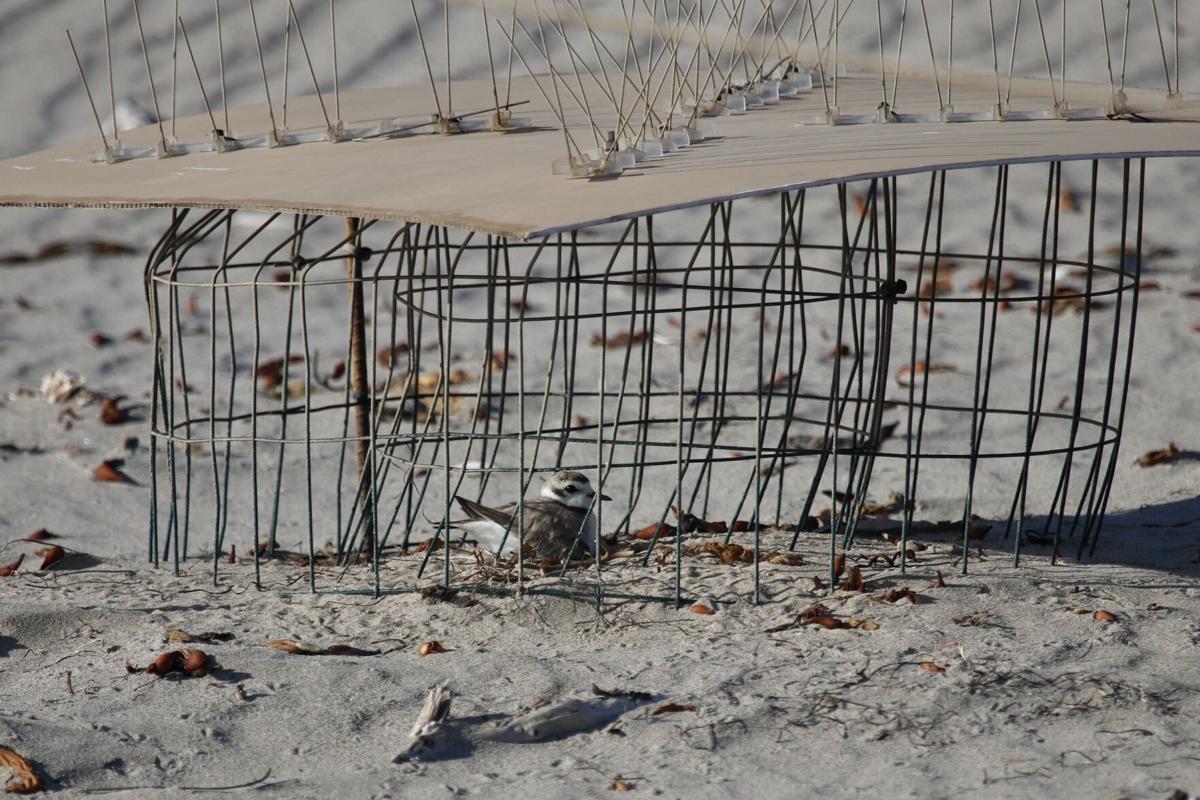 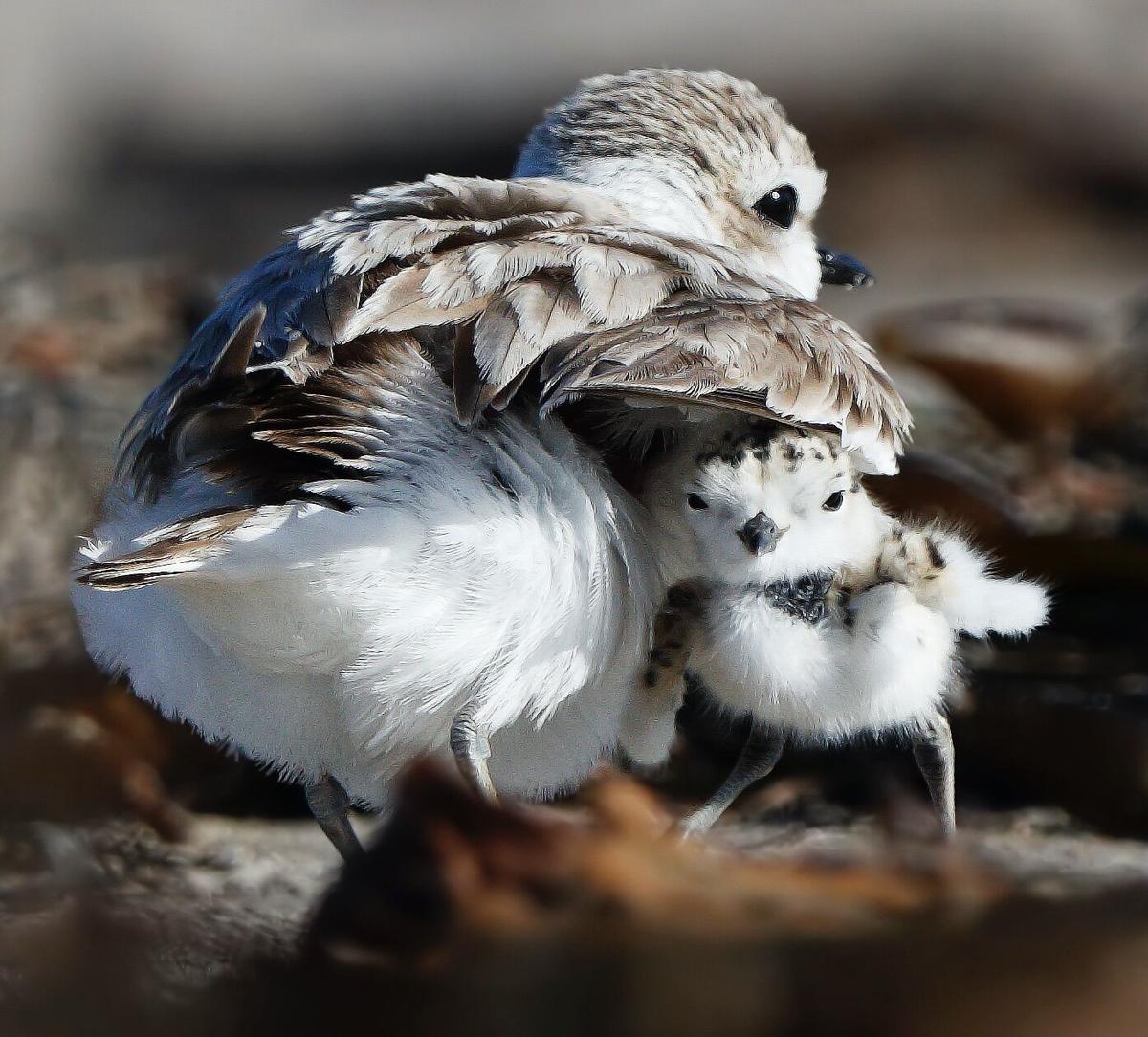 Under Papa’s wing. Male Snowy Plovers care for the chicks after they hatch. 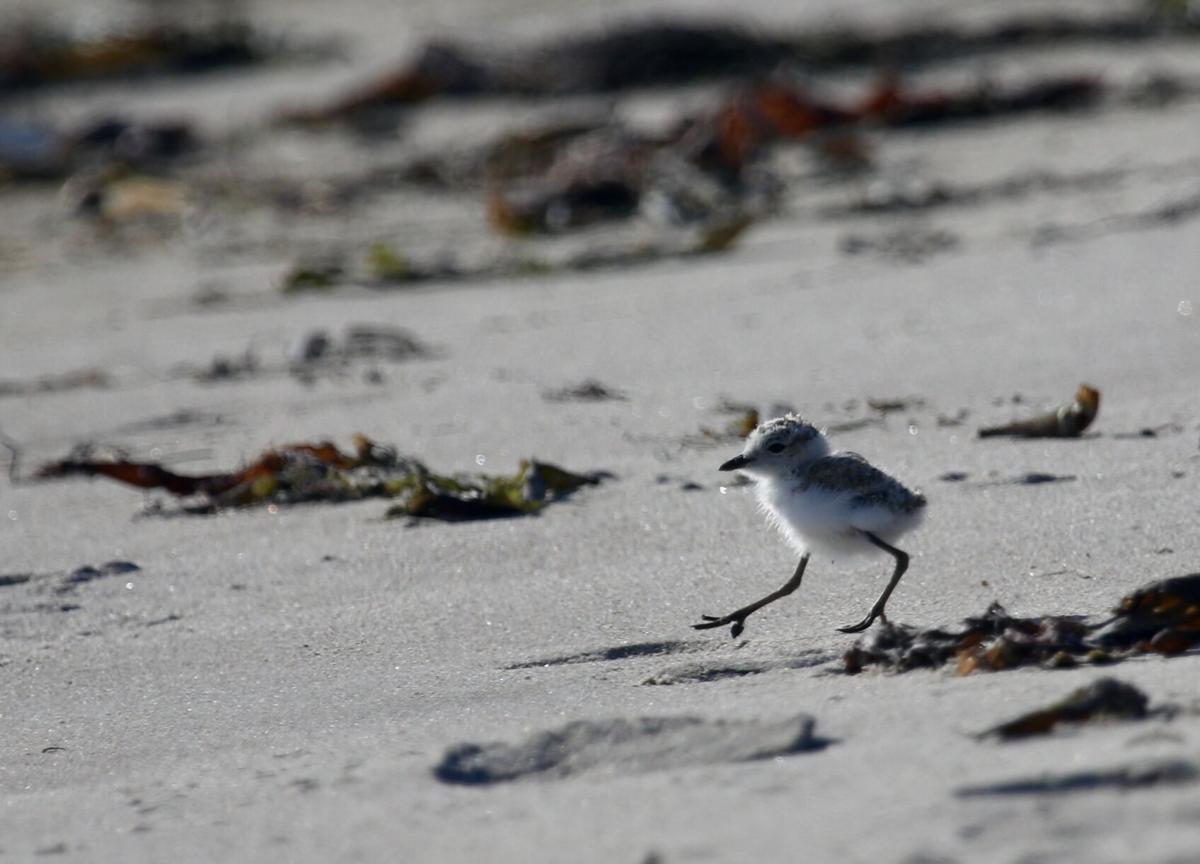 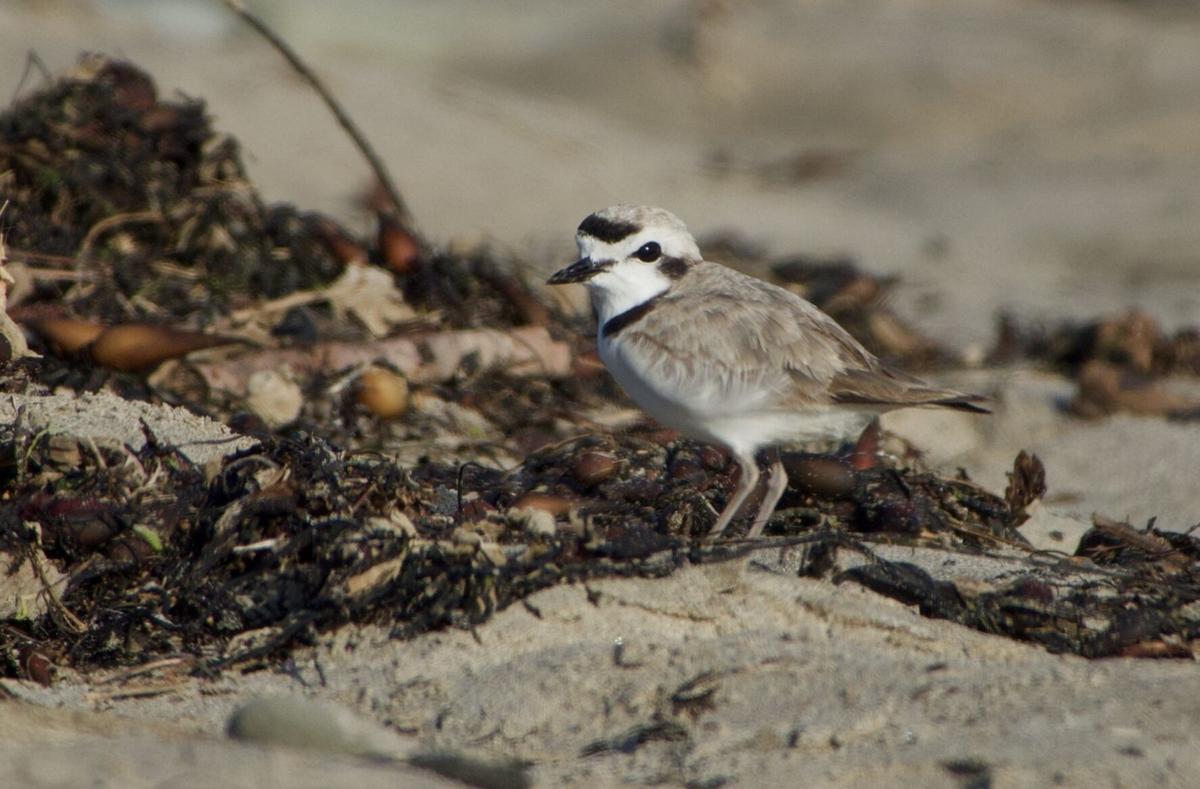 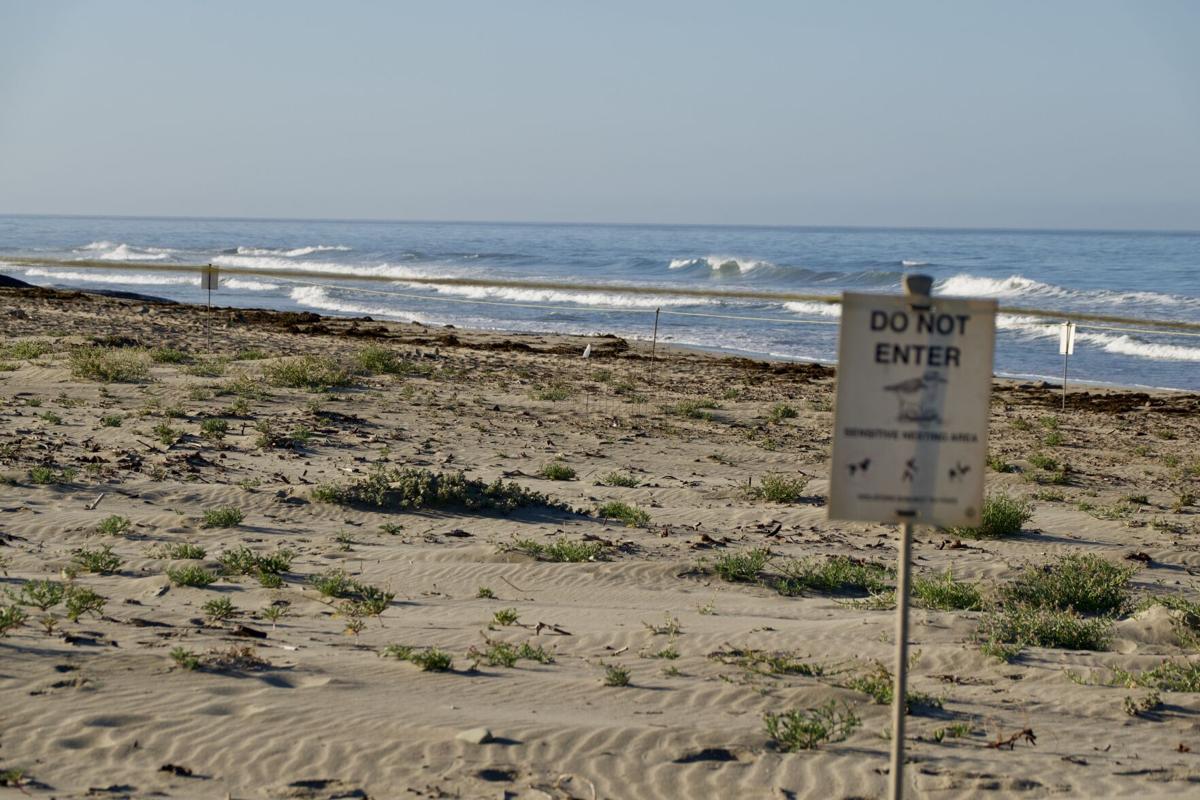 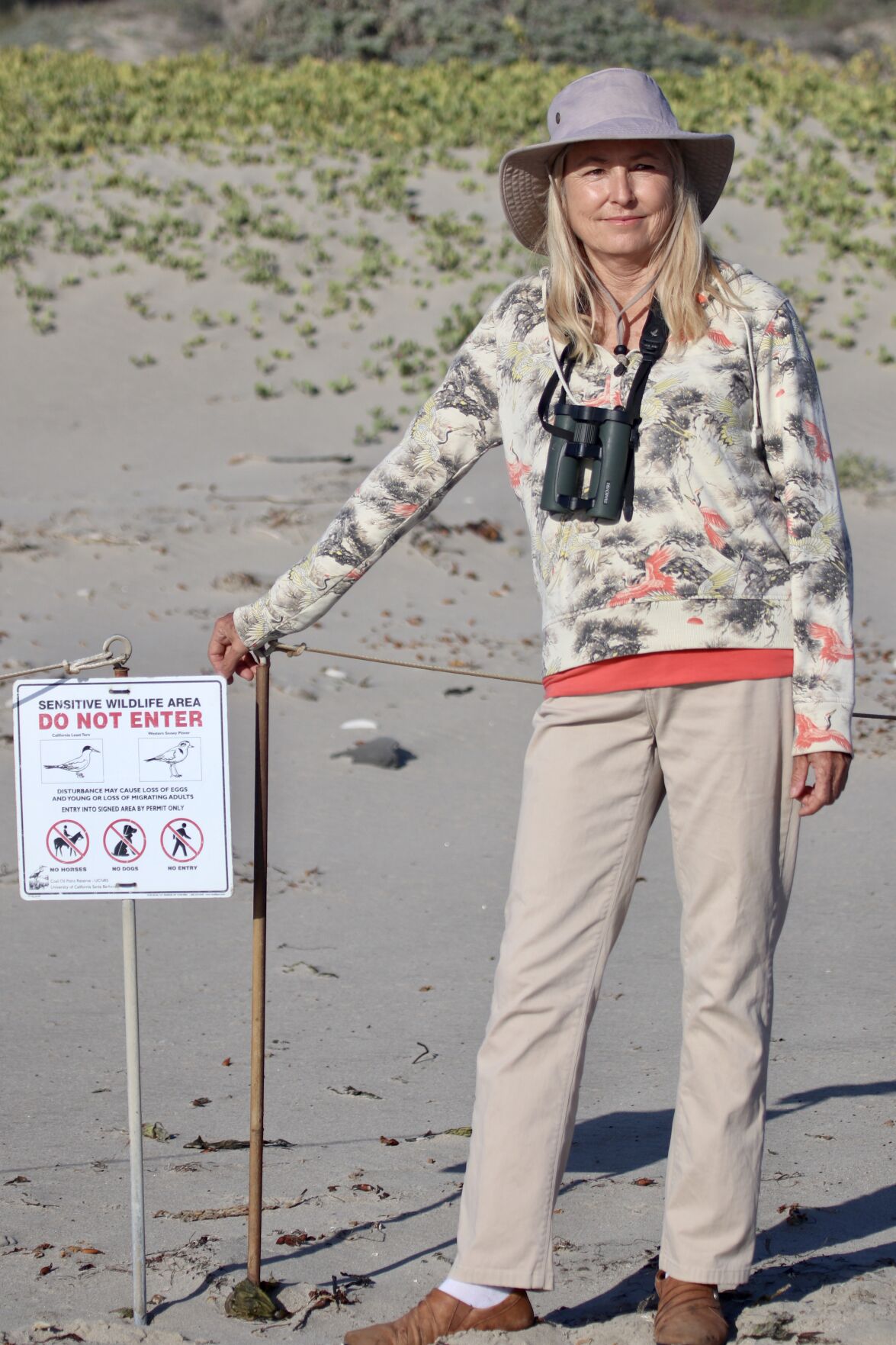 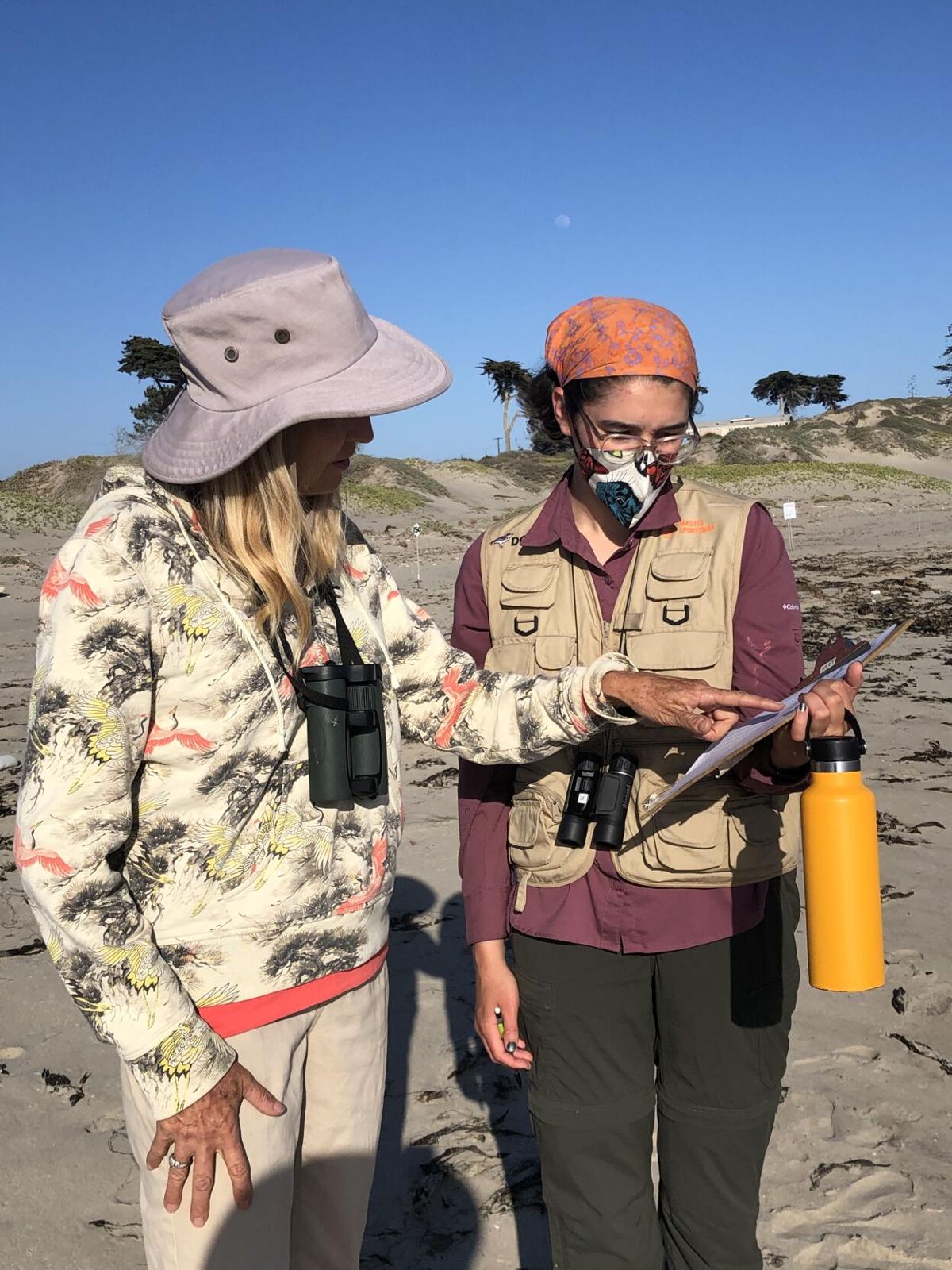 Under Papa’s wing. Male Snowy Plovers care for the chicks after they hatch.

The Snowy Plover sat nestled under a roofed cage with bars wide enough for it to come and go, as if it were relaxing under a palapa.

“Don’t they mind the cage?” I asked. “Surprisingly they don’t – many of these birds were born inside a cage,” explained Cris Sandoval, director of the Coal Oil Point Reserve.

Along the beach was a roped off area. If it weren’t for the crate-sized enclosures, I might not have noticed the pale plovers sitting on their nests – minimalist arrangements of shells and sticks.

Snowy Plovers nest precariously on the strip of sand between the up-rushing waves and dunes. The beach, where kelp is tossed ashore by waves and beach hoppers and sand flies abound, is their dining room.

On my recent tour of the plover reserve with Sandoval, there were UCSB students sunning, as well as dog walkers, runners and cyclists.

I was startled to see three tiny chicks running right down to the water amid this mayhem. A papa plover dodged the walkers, valiantly trying to herd the chicks out of danger as they raced amidst the seaweed wrack, feeding hungrily.

The chicks, covered in mottled downy fuzz, are hard to see unless their movement catches your eye. At three days old, they are barely larger than a cotton puff ball on black stilt legs. Plover chicks are precocious, meaning from the moment they hatch, they feed themselves, chasing beach flies. The female departs in search of another mate, leaving the male to single parent.

In their first month, the chicks cannot fly. They are achingly vulnerable to being stepped on, run over or eaten by crows, jays, hawks or owls. They can also be killed by off-leash dogs that see plovers and their chicks as toys to be chased.

Snowy Plovers are a small shorebird with a short neck, a pale back with a characteristic collar and stubby black bill. They blend easily into the sandy landscape. Unfortunately, the places they nest are busy with other beach lovers. As shoreline development has increased, shorebird numbers have plummeted. Snowy Plovers are now at risk of extinction.

The birds at Coal Oil Point are a small, precious population. “This is the single best place in the world to see this species,” Sandoval said. “Nowhere else are the nests this dense. This year, there are about 25 pairs plus their chicks.”

Sandoval has worked and lived at Coal Oil Point for 24 years. She and her team watch over the birds during breeding season from March to September. She is constantly devising ways to increase their odds of survival. She has trained assistants and volunteers to help in the effort. Many of the volunteers are UCSB students – a fact that gives her hope.

“If you can manage people,” she said, “the plover will be fine.”

Two women with an off-leash dog walked by us. Sandoval approached them in a friendly manner and asked for their help complying with the leash law. The woman reluctantly bent and leashed her dog, but after they chatted a bit, she smiled and waved as she left.

It’s not always that easy.

“Men on bikes are the most entitled people,” said volunteer Kiley Beaarc, a UCSB French and Religious studies student who was patrolling the beach. Her biggest challenge, she said, is coaxing cyclists to walk through the area. “I love looking at the babies,” she said. “If you see them and watch them, you grow to love them. So, my strategy is to point them out to people.”

“They have cuteness in their favor,” Sandoval agreed. “And each bird has a distinctive personality. Some are casual parents and will leave for half an hour. Others are constantly on the watch – helicopter parents.”

Sandoval incubates eggs from abandoned nests. This plover whisperer makes comforting little noises to the chicks when they are still in the egg – and they peep back at her. Then they start to tap at the shell eager to emerge. The Santa Barbara Zoo assumes chick rearing duties.

Coal Oil Point scientists have pioneered ways to help the plovers. Nesting cages now have an opaque roof with spines so that owls and other predators can’t see the birds when flying overhead, nor perch on top.

The eggs are fine dining for skunks. Sandoval, fearless in her commitment, has even perfected a technique for picking up marauding skunks by the tail so they can’t spray. She then removes them from the breeding area.

Snowy Plovers have not nested successfully in Carpinteria since 1960. A nesting attempt last year was washed out by the king tides. So far, this nest has survived.

On May 10, scientists notified the State Beach and a rope fence and antipredator cage now sits over the nest. Local monitors are getting advice from the experts at Coal Oil Point.

Callendar, now organizing a volunteer “plover watch,” was doing a shift over the Memorial Day weekend. I went to look for him and the plovers. Thoughtlessly, I brought along my little dog Henry onto the State Beach, albeit on a leash. As Callendar approached, I realized my mistake and sheepishly took Henry off, then returned. Ugh.

The beach was packed with people. Nevertheless, within the roped off area, the male was sitting tight on the nest, perhaps resting in readiness for the challenges that lay ahead.

“I don’t know if they will make it,” Callendar said, “but if we take turns watching and talking to visitors to make them aware, we can improve the plovers’ chance of survival. That could mean more plovers on Carpinteria’s beaches in the future.”

Volunteers are needed to help with the Carpinteria plover watch. Please email John Callender at jbc@jbcsystems.com Watch for updates at carpbirdwatchers.org.

Nancy Baron leads communication workshops for environmental scientists and lives in Carpinteria. You can reach her at baron@nceas.ucsb.edu