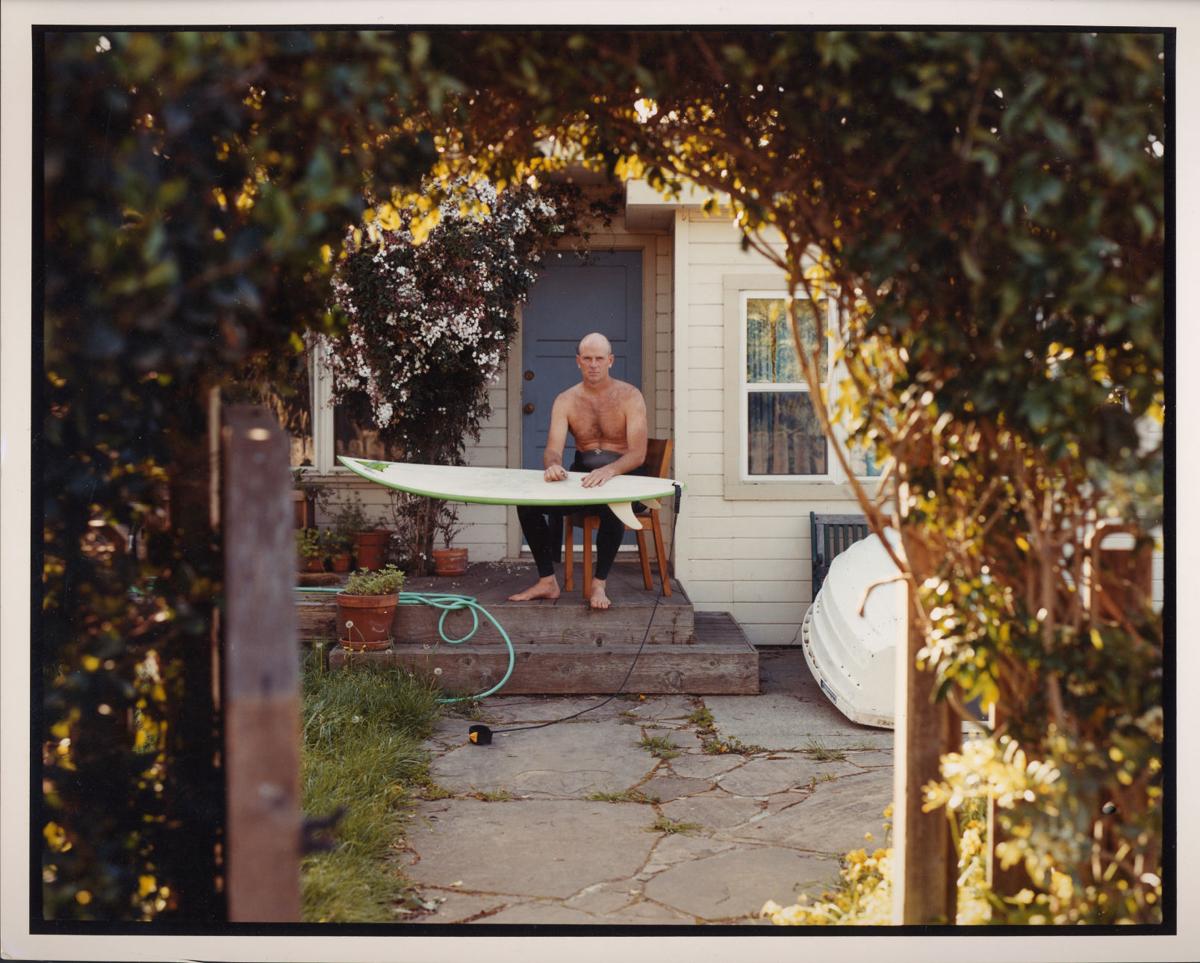 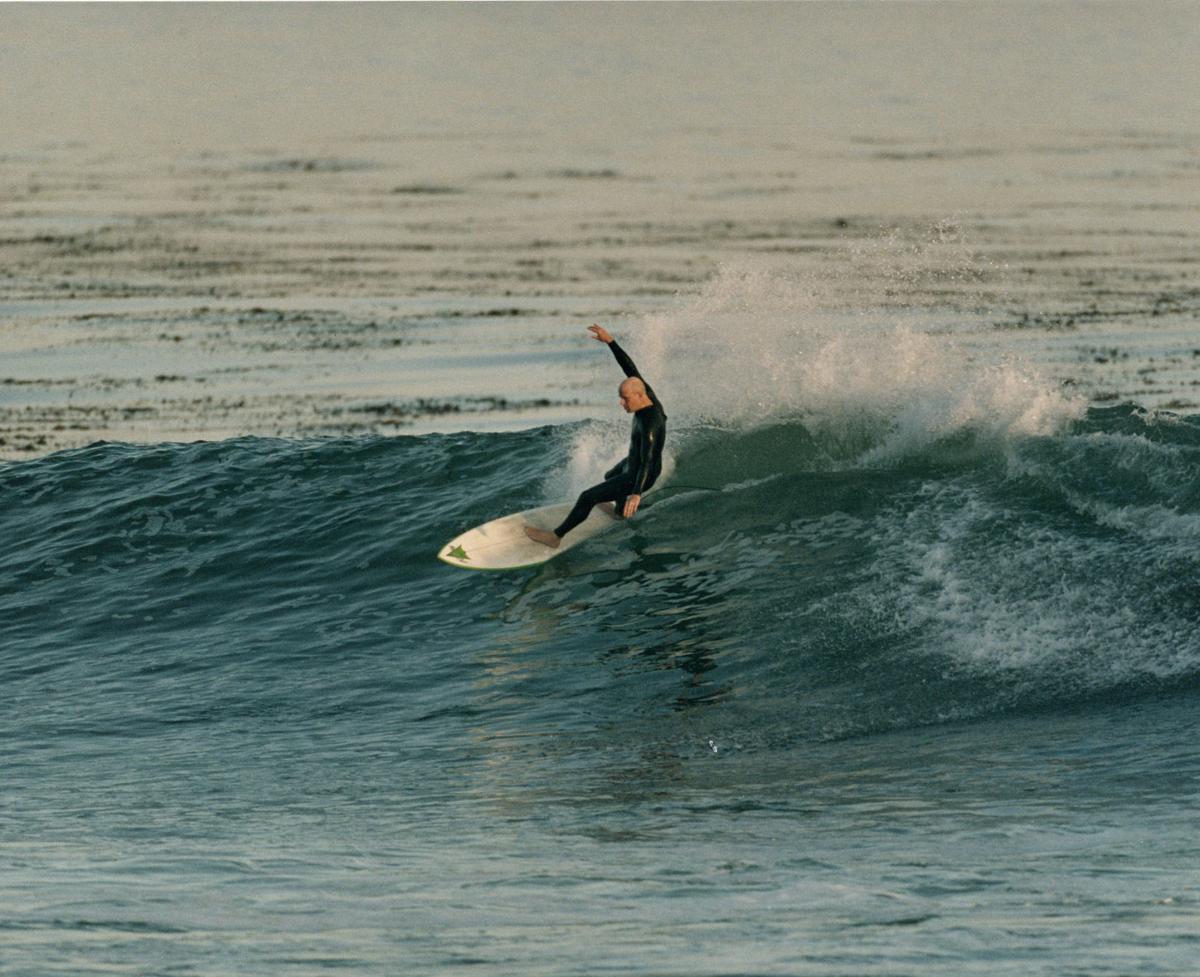 With a surfing act honed on the clean waves of the East Side, Denevan found healing in the ocean despite a sea of chaos at home.

With a surfing act honed on the clean waves of the East Side, Denevan found healing in the ocean despite a sea of chaos at home.

“I’m an experienced surfer,” my friend Jim Denevan replies, as if to explain how he’s pulling off a farm dinner for 80 guests on location where any number of things can go wrong, from inclement weather to a high-tide rogue wave swamping the end of the table.

Another good friend, Patrick Trefz, has made a film about all this titled, “Man in the Field: The Life and Art of Jim Denevan,”  screening at the Lobero Theater in Santa Barbara on Saturday, Jan. 18, at 7:30 p.m., and at the Metro 3 on Monday, Jan. 20, at 11:40 a.m., as part of the Santa Barbara International Film Festival, and I cannot recommend it highly enough—not because it’s the creation of a couple of Santa Cruz pals of mine, but because it represents two artists at the pinnacle of their respective careers thus far: Trefz as a filmmaker, and Denevan as a land artist and cultural innovator with his “Outstanding in the Field” farm-to-table dinners that he puts on across the country and internationally as well.

It would be enough for Trefz to have documented the low-tide beach drawings Denevan creates with a piece of driftwood and a landscaping rake, and to have made the point that it was Denevan who started the whole farm-to-table movement in the mid-90s at a little farm in the Pogonip up in Santa Cruz. But as a true documentarian, he stays with Denevan through silences that open to reveal deeper influences and traumas that underpin everything he does.

I knew some of Jim’s stories because we became friends as I was working my way through Cabrillo Junior College and UC Santa Cruz, and I fell in with the surfing crew up there—and he, a few years older than me and the guys I was hanging with, had a reputation as one of the top surfers at Pleasure Point on the East Side. I suppose we forget how different the time was before: not only ancestor time, but even just pre-internet time. Email was a thing and Silicon Valley was a vague presence “over the hill” in San Jose circa 1994, but the vestiges of Neil Young living up in La Honda, Dead shows at the Filmore in San Francisco and runaway kids on high doses of LSD made a much larger and more presently felt impact. As did guys like Denevan, who weren’t necessarily the most welcoming, but who carried an air of deep knowledge and skill.

He’s an imposing presence at well over six feet tall with a linebacker’s build, but he surfs with fluidity and joy in swooping arcs across the glimmering green walls of his beloved First Peak at Pleasure Point. Not surprising to me anyway, he’s always preferred Twin Fin surfboards. Still, the film isn’t really about surfing, except in the old Tom Morey sense of everything in life being a form of surfing—and man, has Denevan ridden some waves, both literal and metaphoric. I won’t spoil it by doing a recap, but if great art is born out of pain and suffering then Denevan comes to it honestly.

And it’s hard to say which is the greater achievement: Denevan’s cooking, or his land art. If pressed to choose, I’d say it’s the latter. Now, I can describe the concentric circles he draws on the wide canvases of lonely Northern California beaches, but it’s difficult to convey the precise symmetry of the work, and the scale that he achieves. An X-shape, each line 1,000 yards long and cut perfectly straight, tapering away evenly. The circles-within-triangles, visible by satellite, a mile across on a desert pan somewhat out in the American West. There is something of the mandala, or sacred geometry, to the pieces. Perhaps a touch of madness too in his singular, almost compulsive focus. It runs in the family. And not “zany,” or merely “wild,” but true, debilitating mental illness—not in Denevan, but in three of his brothers. As a person who knows what it is to have had a close family member in the grips of insanity, I can say with confidence that one doesn’t get through it without getting some overspray on him or herself.

At one point in the film Denevan says “(I’m) constantly transcending my condition,” and if that’s not surfing than I can’t say what is. “You shouldn’t be afraid of people,” he says a little further on, which is so typical of the man I knew in Santa Cruz, though we haven’t seen each other in a long time. But that’s how he speaks, in short declarations. There’s an assertiveness that carries authority but is never shrill, or even harsh. I suppose it’s called truth. Denevan speaks the truth. Never more so than when he says, “it’s all very meaningful, the connections with people, with earth, land, water and atmosphere—those things are very profound and powerful.”

For 20 years, Denevan’s crew with Outstanding in the Field has been coming to the Coleman Family Farm here in Carpinteria, and with the bounty of this region and his culinary skill—whether cooking himself or via the chefs he brings on—one can imagine a meal for the memory books with the soft light of a summer evening glowing off the Santa Ynez range. The next Outstanding in the Field meal in Carpinteria appears to be already sold out, but for more information on Denevan’s extraordinary organization, visit outstandinginthefield.com.

Christian Beamish is an Editor at the Coastal View News. He is also the former Associate Editor of The Surfer’s Journal and author of “The Voyage of the Cormorant” (Patagonia Books 2012) about sailing into Baja aboard his self-built, 18-foot beach boat by sail and oar. He lives in Carpinteria with his wife and two young children.