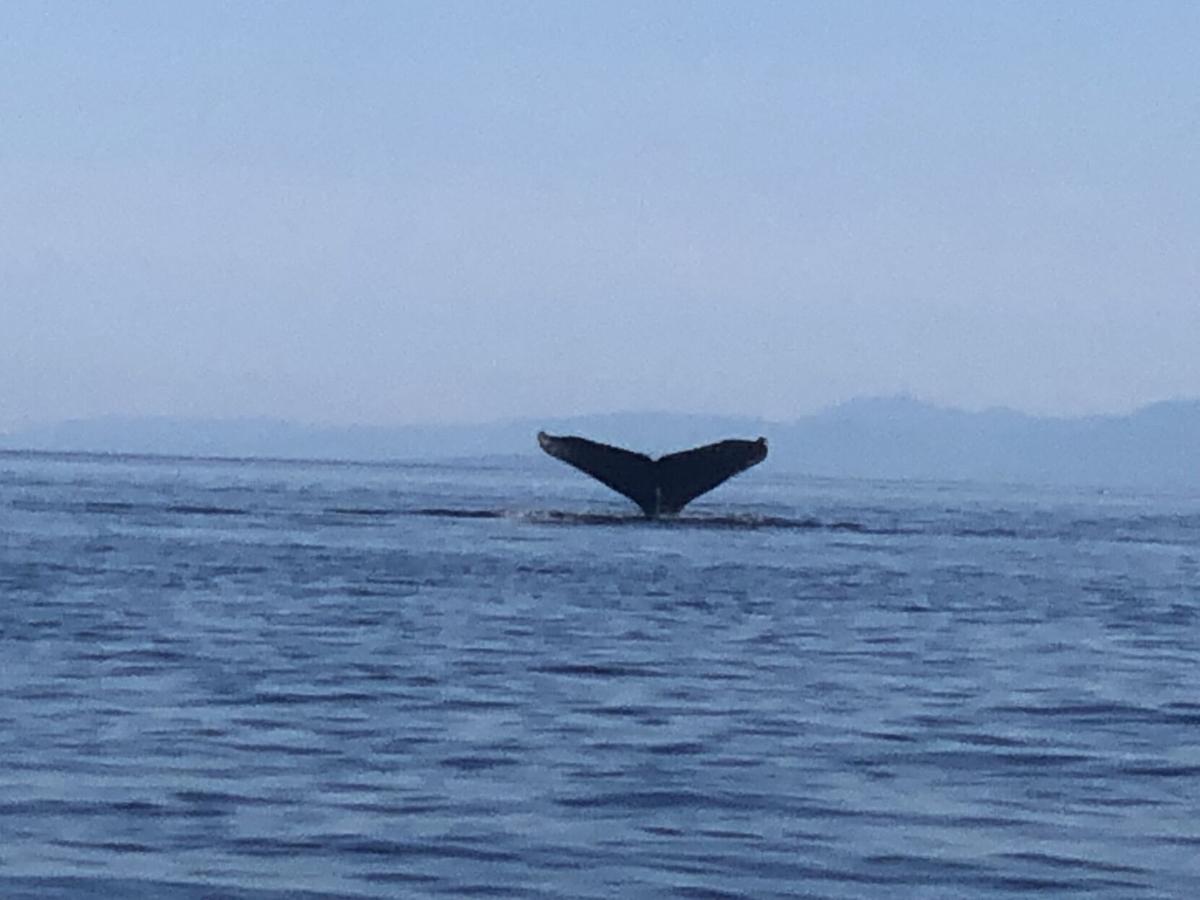 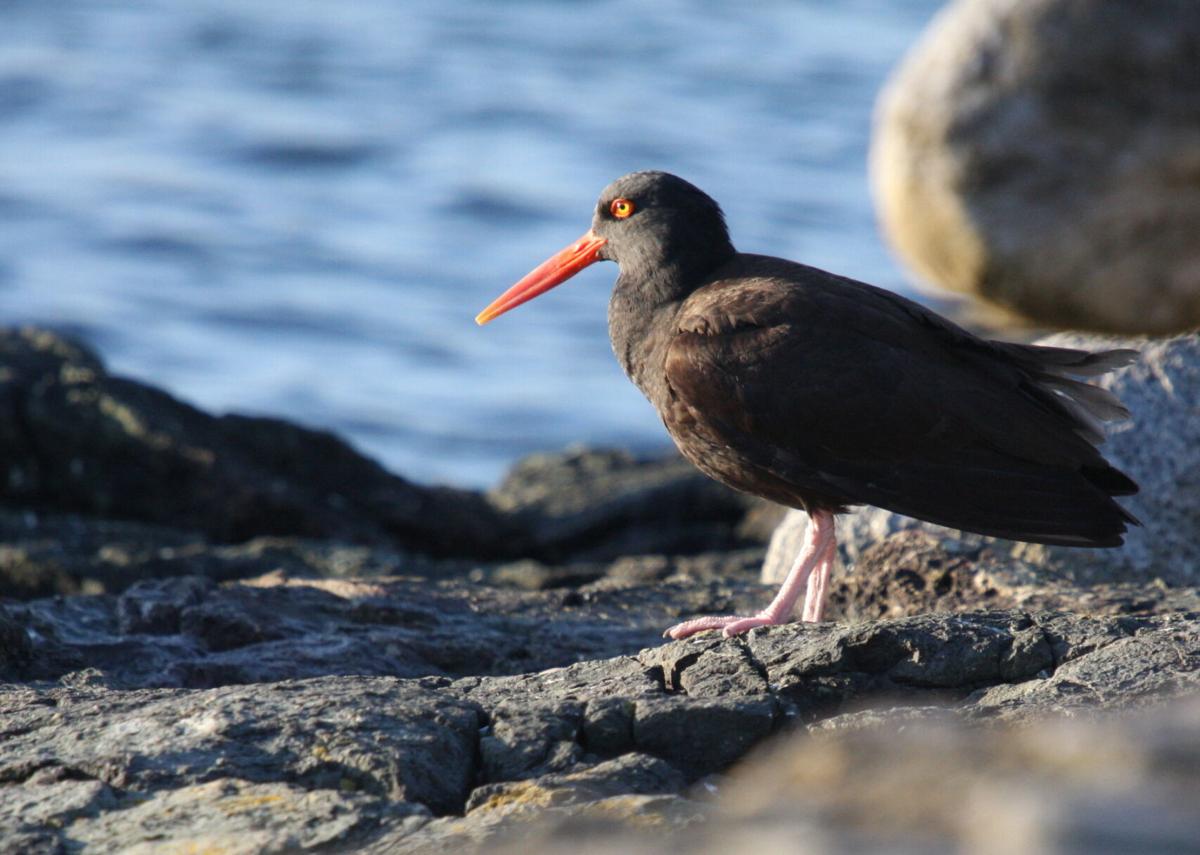 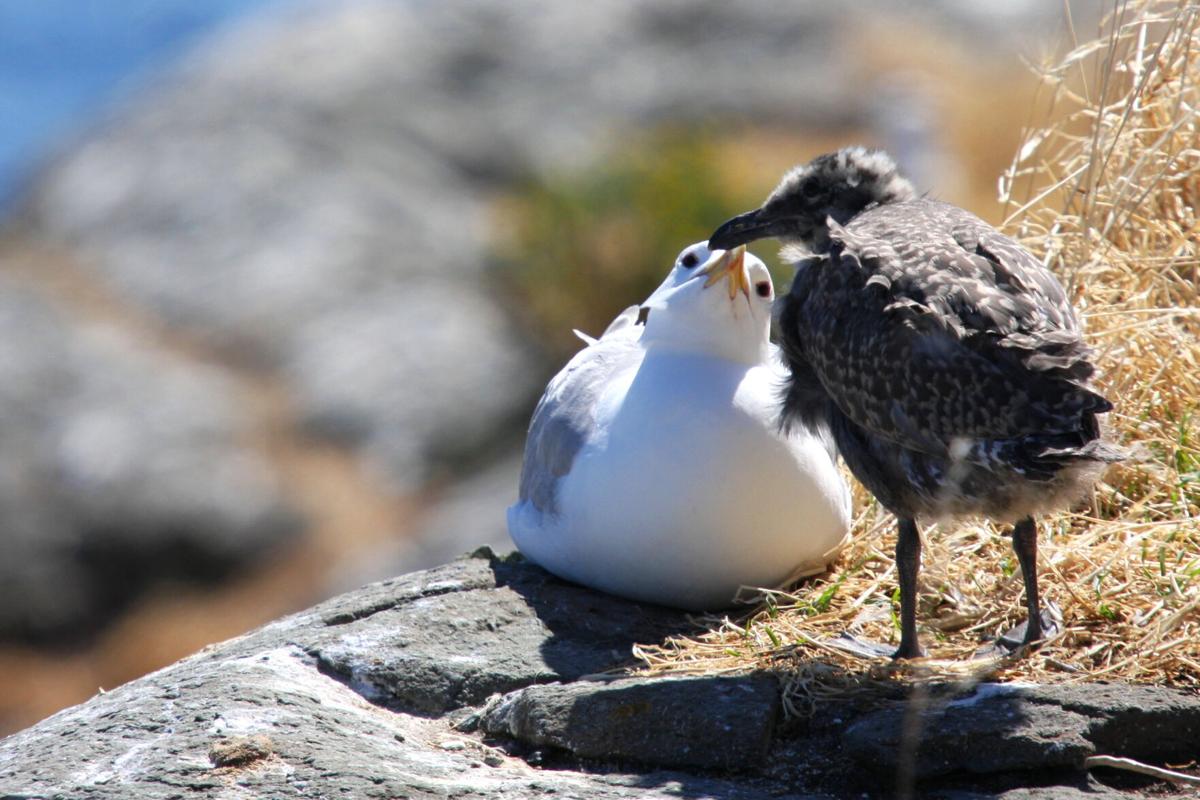 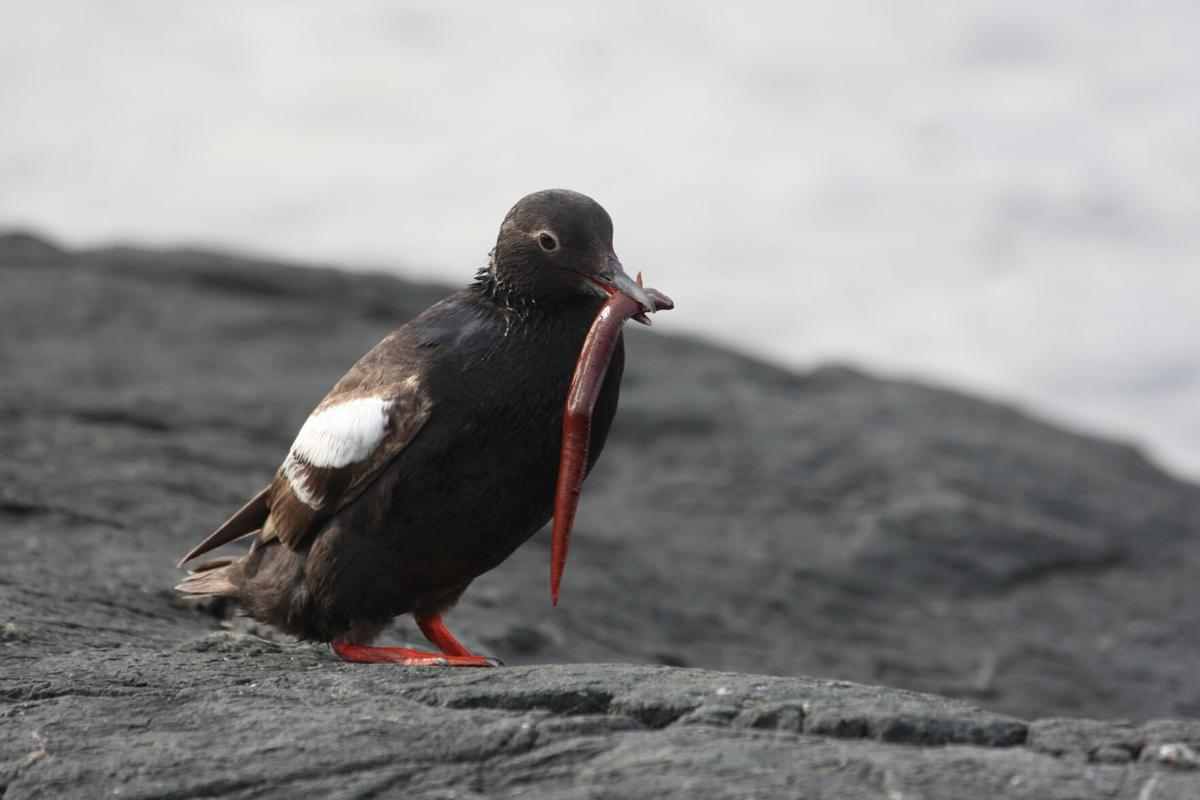 Pigeon Guillemots, the penguins of the north, dive for bottom dwelling fish to feed their young. 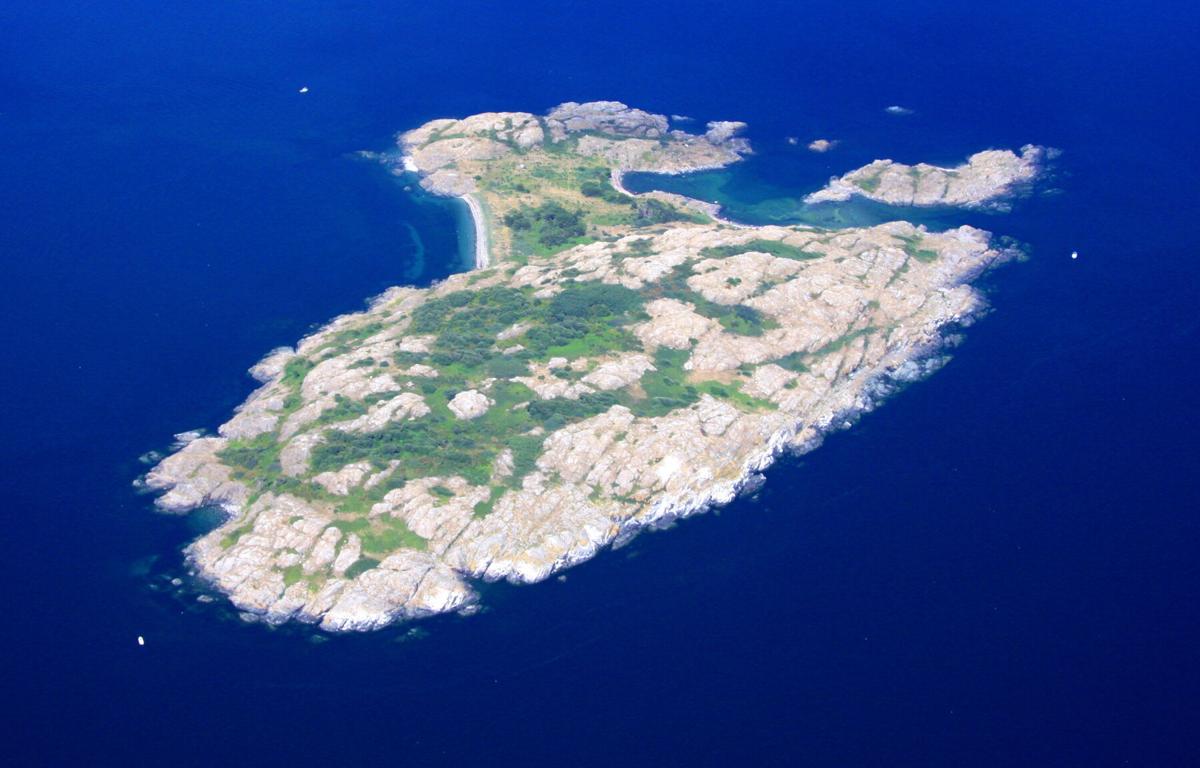 It takes only a couple of minutes to walk across the back of Mitlenatch, but several hours to circumnavigate by kayak and count seabirds. 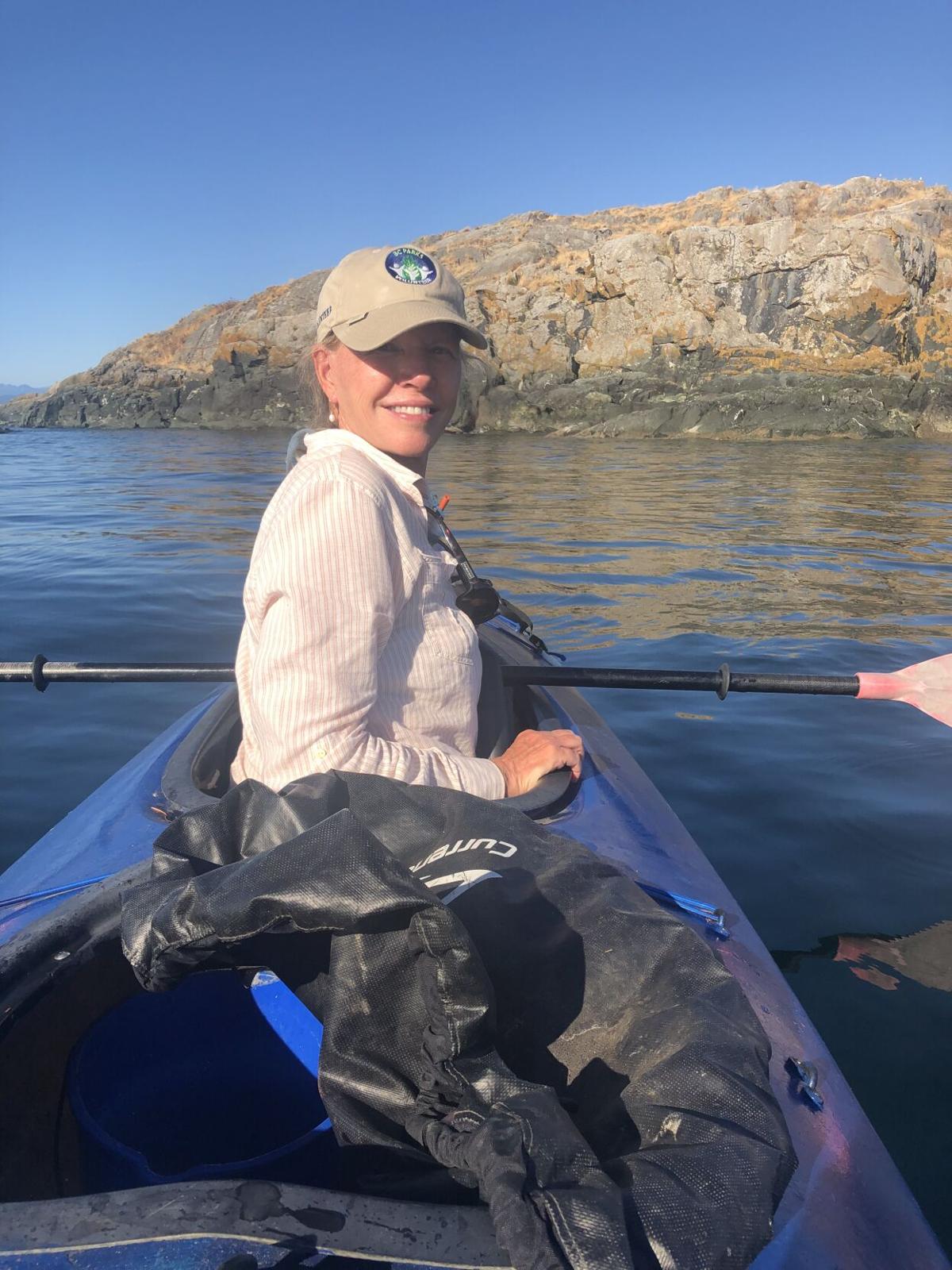 The author in her kayak.

Pigeon Guillemots, the penguins of the north, dive for bottom dwelling fish to feed their young.

It takes only a couple of minutes to walk across the back of Mitlenatch, but several hours to circumnavigate by kayak and count seabirds.

The author in her kayak.

This summer, my annual migration to Mitlenatch Island off the coast of British Columbia was an obstacle course. First, there were three Covid-19 tests and a complex crossing at the U.S./Canada border. Then, my flight to the coast was cancelled due to wildfires in British Columbia. In a panic, I drove two hours to another town where I caught the last plane before a shroud of smoke shut down the region’s airports for days. I made it to the departure point just in time for the scheduled boat ride to Mitlenatch.

When my friend Alison Watt and I finally ferried our gear the last 100 yards to shore by rowboat and stepped onto the island, I was ecstatic. The resident raven with distinctive white feather shafts flew overhead with his “Quirk Quirk” call. He tucked a wing and flipped upside down – a salute. This raven, whom I call Quirk, and his mate, nicknamed Quark, arrived as a pair in 1999 only three years after Alison and I started our annual summer pilgrimage here. It felt like a greeting between old friends.

Mitlenatch has changed a lot over the 25 years that Alison and I have volunteered as park warden/naturalists as part of the Mitlenatch Island Stewardship Team. Each day of our weeklong rotation, we talk to visitors who arrive by boat, answer questions, do bird surveys and keep records. No overnight campers are allowed. Mostly we are alone with the island’s denizens, living in our Robinson Crusoe-style cabin made of driftwood.

Mitlenatch Island Nature Park is the largest seabird colony in the Strait of Georgia, between Vancouver Island and the British Columbia mainland. It is designated as an IBA — one of the world’s Important Bird Areas. It is shaped a bit like a dumbbell with a narrow neck. Walking from Camp Bay across to Northwest Bay takes less than five minutes along a dry grassy path that feels like walking on the back of a golden animal.

Each year holds new surprises. On this August day, we are startled to see 200 belching and bellowing Steller’s sea lions lounging on the rocks at the mouth of Camp Bay. Usually, the sea lions head further north to Alaska. A Humpback whale glided past feeding close to shore. Humpbacks have only recently returned to the Strait of Georgia as they were hunted out long ago.

Mitlenatch has no water except for rain. The animals are adapted to it – but not the baking heat that gripped the Pacific Northwest this summer. I had heard that the Virginia Rails, a marsh bird that has somehow managed to breed on this dry island, were struggling. The previous volunteers found a chick staggering around before it died. So as soon as we arrived, I put out water in shallow bucket tops at various locations. No sooner had I done so then a rail chick emerged and stood in the water. Alison and I continued to catch glimpses of the happy little water bird scuttling in the lens of water. Even a garter snake took a turn. One evening, I stumbled across a Rough-skinned newt in the makeshift watering hole, a species I didn’t even know was found on the island.

The heat dome in British Columbia has knocked out a lot of life. It coincided with low tides which exposed mussels, barnacles, beach crabs and even sea stars, virtually cooking them and leaving a stinking rotting mess.

The tragedy for intertidal life seemed to turn into a bounty for the island’s Glaucous-winged Gulls, which are scavengers. This year many gull pairs successfully reared two, and even three, chicks.

Predators seem fewer too. There is scat evidence near the river otter’s den, showing they are back to eating seafood rather than gull chicks. Bald eagles, which typically treat the gull colony like an Albertson’s, are seldom seen.

Even the Pigeon Guillemots, little black seabirds with red feet that nest in fissures in the cliffs, seem to be doing well, hunting their favorite long red-colored blennies. With these eel-like fish dangling from their bills, they fly around until they are sure no predators are watching. Then they dive into their cliffside crevice to feed their hungry chicks.

Each day, Alison and I circumnavigate the island in our gut-bustlingly heavy kayak which is essential for counting breeding seabirds on the cliffs.

It is also quiet this year because there are no boats from the U.S. But a pop-up industry of whale watching boats bring Canadian tourists to circle the island and look at the sea lions and whales. Boaters must keep a sharp eye out for humpbacks, which emerge out of nowhere for a quick breath between feeding dives. At times, we have had to intercept these boats in our kayak and remind them of the law to remain at least 100 meters away from marine mammals.

Most evenings we walk across the island to watch the sun set from Northwest Bay. We sleep in a grassy meadow under a giant bowl of stars, listening to the palaver of gulls which goes on all night. The big dipper skims the horizon – and in the darkness, we can hear the exhalations of whales.

Nancy Baron is a biologist, naturalist, and the author of Escape from the Ivory Tower and Birds of the Pacific Northwest. She and her writer husband live on a small organic avocado ranch near Carpinteria where they share their naturehood with as much wildlife as possible.