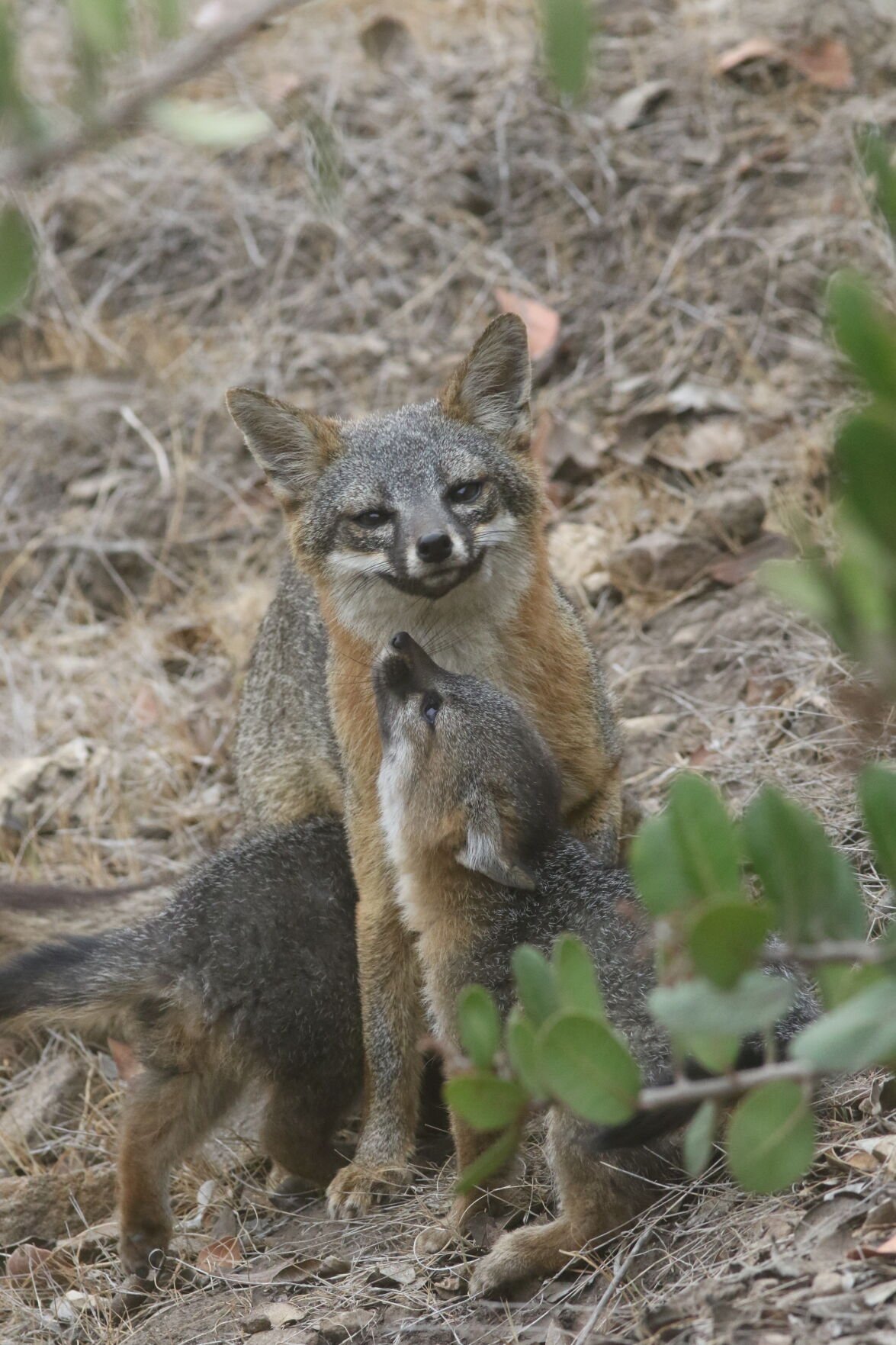 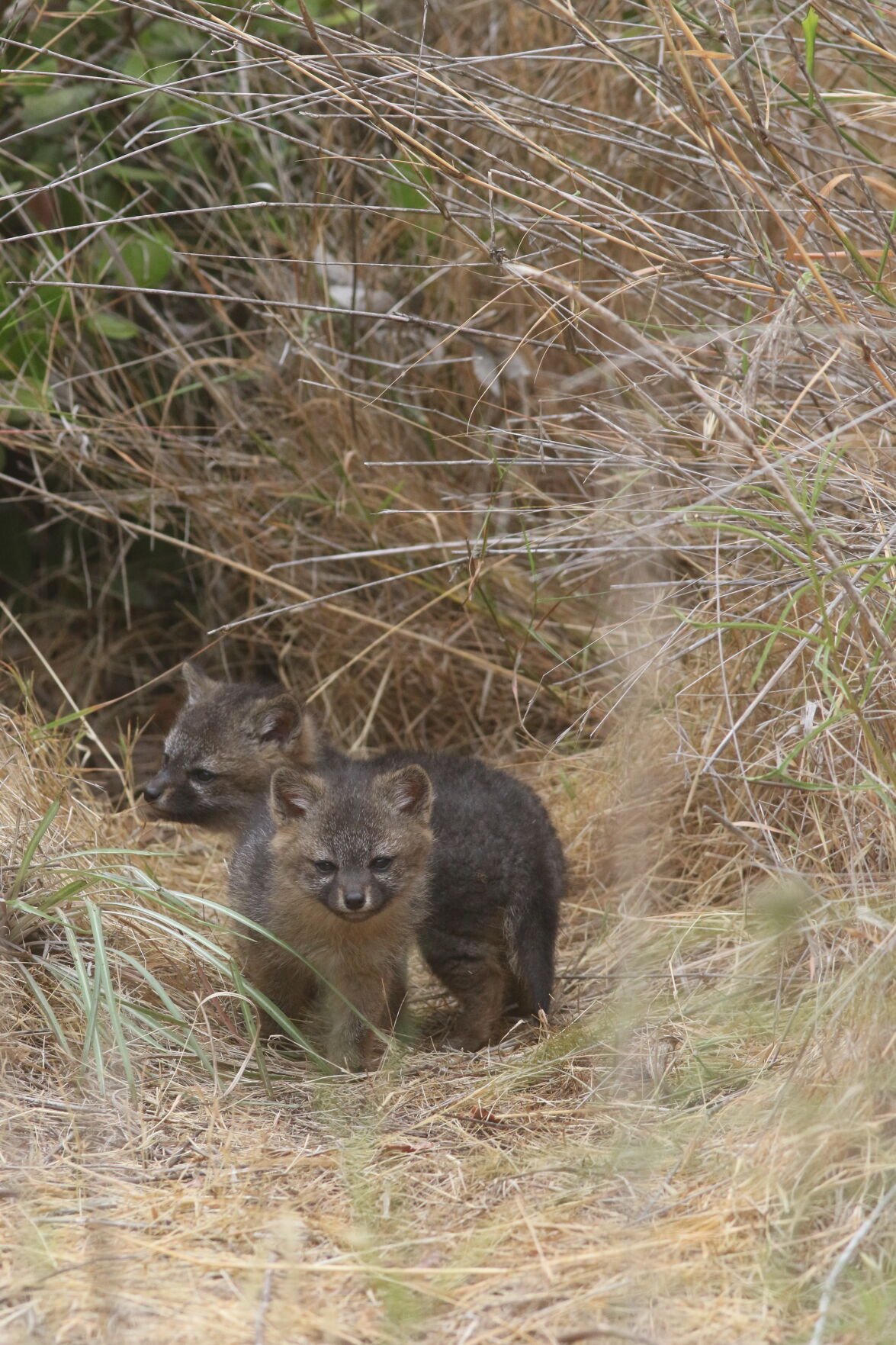 Island fox pups tuck away in their den for the night.

Island fox pups tuck away in their den for the night.

Its tiny black button snout bumped into my weathered finger. Then the 6-week-old island fox pup proceeded to gently rub its silvery muzzle against my hand as we huddled out of the northwest winds on Santa Cruz Island. Shielded by a long shallow gully smothered in lemonade berry, purple sage and a soon to be ripe grapevine, the pup’s parents selected a great spot.

From February through May 2021, I had scoured Scorpion Canyon in hopes of finding a reliable island fox den to photograph. I followed two separate mating pairs in the early mornings and late afternoons that stuck to their prospective territories, traveling the same routes several times per day.

There was lots of great behavior amongst these monogamous canids as they jostled with each other while patrolling their boundaries, warding off any interlopers – fellow island foxes looking to infiltrate precious territory.

Island fox dens are difficult to come by. At four pounds they are ironically the largest land predator on six of eight California Channel Islands, so they are not preyed upon, which means the parents really don’t have to worry about making a den to defend. They stay within their boundaries and sleep wherever they feel like.

However, once the pups are born the parents will stick to one spot for several weeks until their pups become more mobile and can scale the volcanic rocky hillsides and seasonal arroyos. After searching for weeks and coming up empty, myself and several guides were waiting in the old corral for day visitors looking to kayak through the honeycombed, wave-battered cliffs of the most biodiverse isle off the coast. It was late May, and I was worried I was going to miss an opportunity. And then, before the boat arrived, a pair of island foxes trotted past us with a little fuzzball in tow. It was about the size of the palm of my hand and trying to nurse on the run.

That initial family of three soon became four, the next day revealing two pups playing with their overjoyed dad within the corral. They were sleeping behind the corral in a maze of island flora and a grapevine, a holdover from the ranching era.

At first it was challenging getting photos of them. The gully was a maze of long tunnels beneath the vegetation, but within the first week I had their routines dialed in. Their mom would nurse them several times a day, and their dad brought them mice and other island treats from throughout their territory, which included the cobbled shoreline, both sides of Scorpion Canyon, Scorpion Creek and the diatomaceous earth above our kayaking gear.

When their doting parents were out and about, the pups roughhoused mightily. One pup was a little more aggressive, a little more curious. It had no problem sitting on my foot or tugging on my index finger, wanting to take it with it into its dense maze. Many times, I caught them just outside their den where they continually beat the snot out of each other. At the end of the day though, they came together, snuggling up in tight furballs inside one of their den sites.

Survival of the foxiest

As I waited patiently on the hillside of Grapevine Gully, there was no activity around the den site. The pups were now six weeks old and a bit more mobile, but their parents were still feeding them. Other than the wind howling, it was quiet, but not for long.

The dad showed up at the den, but the pups were nowhere to be found. He had brought them a fish head brought up from the cobbled shore. He buried it under a lemonade berry bush and then left. Twenty minutes later the pups arrived. The more outgoing, aggressive pup found the fish head quickly and took off without sharing with its sibling. This was a common theme over the last three months.

The other sibling didn’t have a clue and searched everywhere the greedy, more dominant sibling was not. When it finally figured things out, all that was left of the fish head was an eyeball.

Not that the sweeter, kinder pup wasn’t being fed, it was doing well foraging on its own. Island foxes are omnivorous, feasting on insects, reptiles, birds, mice, isopods and berries. Recently, the more congenial pup encountered a yellow-bellied racer. It may have been an initial encounter. The pup was more playful with the constrictor instead of looking to feed. It batted at its tail and followed it into a tightly tangled web of island morning glory.

Adventures and experiences like these will in no time serve these island fox pups well. Within the coming year they will eke out their own territories, find mates and thrive on one of the most unique island biomes on the planet.