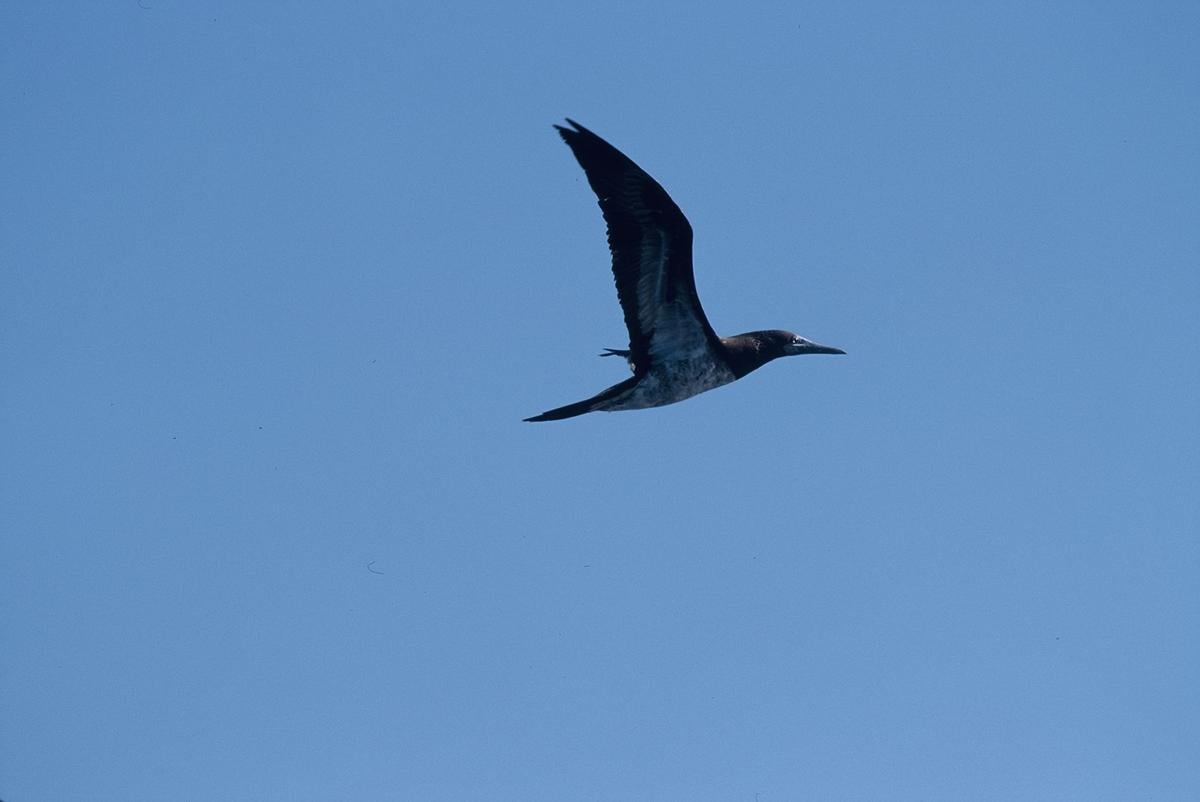 A Brown Booby soars over the SB Channel. 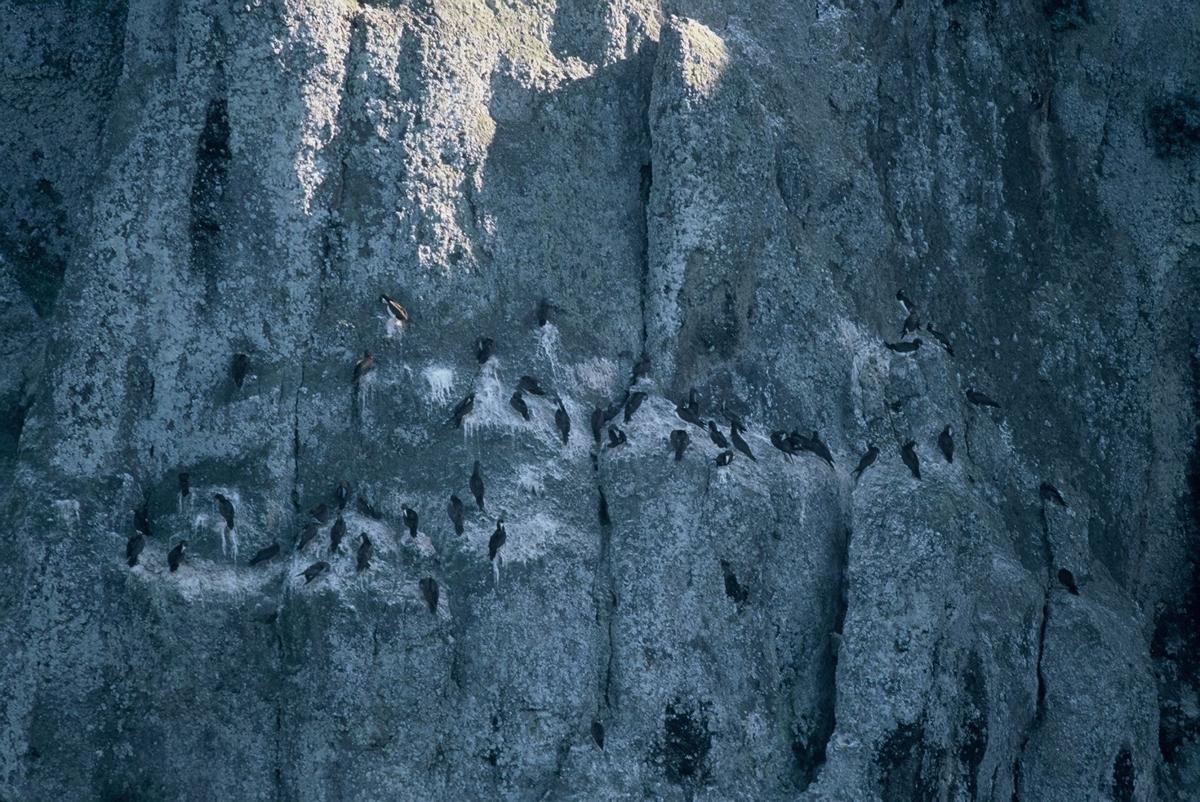 Brown boobies roost on the cliff face of Sutil Island.

A Brown Booby soars over the SB Channel.

Brown boobies roost on the cliff face of Sutil Island.

I love surprises when Mother Earth serves them up. A few years ago when I kayaked from Santa Cruz Island to tiny Santa Barbara Island, I just wanted the 42-mile slog to be over.

In 2015, at 8 p.m. on a crisp, cool October evening, all I wanted was to see the 1-square-mile isle. In my blue Necky kayak in the open ocean for 17 hours, I really wanted to touch down on some wave-battered rock and feel the barnacles between thoroughly pruned toes. It had been 17 hours kayaking with another guide. The same guide I towed for the last six hours of the trip––the same guide who lost his paddle in the dark and, for the last 2.5 hours, I had towed, his kayak swinging uncontrollably, side-to-side and sometimes slinging past me in the northwest chop. It took all my strength, resolve and experience to keep me in check, and yet, I’d do it again.

Sutil Island is more of a massive rock than an islet, similar to something out of the first Indiana Jones movie—sheer volcanic rock faces that only seabirds could love. Forget about landing on it. Fortified with cheese grater-like barnacles, Sutil Island lays just an eighth of a mile south of Santa Barbara Island, exposed to every swell direction, all winds and always desolate.

It was all I saw in the dark on that moonlit night, swirling fog clinging to the islet like a certain seabird that now calls it home.

We made it safely to Santa Barbara Island. The seabird biologists stationed there helped us get our gear on the Landing Cove. It was approaching midnight. Legs a little wobbly, lower back stiff, shoulders screaming, we slept soundly.

inner clock though, it always kicks in around 4 a.m. At first light I was up and I made sure my paddling buddy heard me. I made him get up too. After all, I got him there. He had to put up with my photo needs, so we got back in our kayaks by 6:30 a.m. and paddled around the beachless isle.

After rounding towering Arch Point, guano-covered Shag Rock and then wave-battered Webster Point, we saw our beacon of hope from the previous night—Sutil Island. There was no denying its ominous north face. Something was different about it though, from previous excursions.

It was alive. There was movement of the avian variety. Dark wings flapped against its precarious, damp cliff face. A bevy of brown boobies were hanging tough on the few perches available to them. At the time, anyone that knew something about these seafaring birds assumed they were just there for a visit due to abnormally warm waters driven from south of Mexico. Things have changed a little now. Recently, Channel Islands National Park seabird biologists confirmed the first record of a brown booby chick from an active nest on Sutil Island.

The successful nest signifies a northward expansion of their known breeding range in the Gulf of California and along the Pacific Coast of Mexico. The next closest current breeding colony is located on the Coronado Islands off Northern Baja California.

Once considered a rare visitor to the Channel Islands, Brown boobies were observed only 16 times in the 30 years between 1984 and 2014.  They were first seen roosting in small numbers on Anacapa and Santa Barbara Islands in 2013. There was a dramatic rise in their numbers in 2015 with over 170 individuals observed at Santa Barbara Island. Since that time, they have been seen consistently on both islands with fewer sightings occurring on Anacapa Island.

“Seabirds rely upon the rich marine resources and the isolation of these offshore islands to provide food and undisturbed nesting grounds safe from predators,” said Channel Islands National Park Superintendent Ethan McKinley. “With this successful brown booby nest, there are now 14 breeding seabirds that rely upon this vital habitat.”

Brown boobies are generally considered a tropical or subtropical bird. They’ve extended their range northward since the 1990s, when they first migrated to the Coronado Islands of Baja California from the Gulf of California of Mexico. This expansion of their range coincides with shifts in oceanic conditions with warmer waters and changes in prey availability.

All species of boobies are known for making spectacular plunging dives from heights of up to 50 feet to feed on bait fish. They nest on islands, lay their eggs on the bare ground, utilizing sticks, rocks, bones, and vegetation for nesting material. During the winter they fan out to sea, always seeking their next meal.

Like a lot of other species worldwide, brown booby populations have declined due to loss of habitat on islands where introduced predators have reduced active nests. That’s not the case on Santa Barbara Island, an isolated, treeless haven offering undisturbed habitat and a pit-stop for an exhausted kayaker.