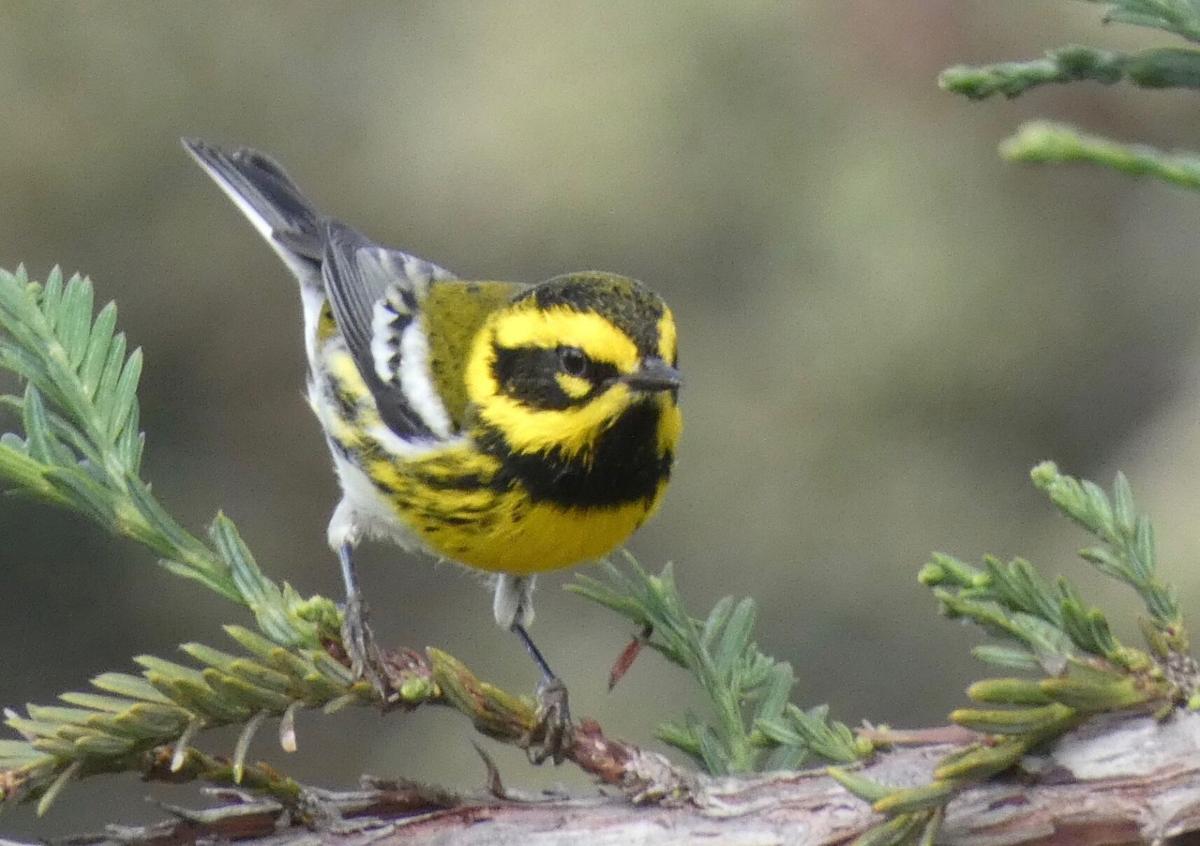 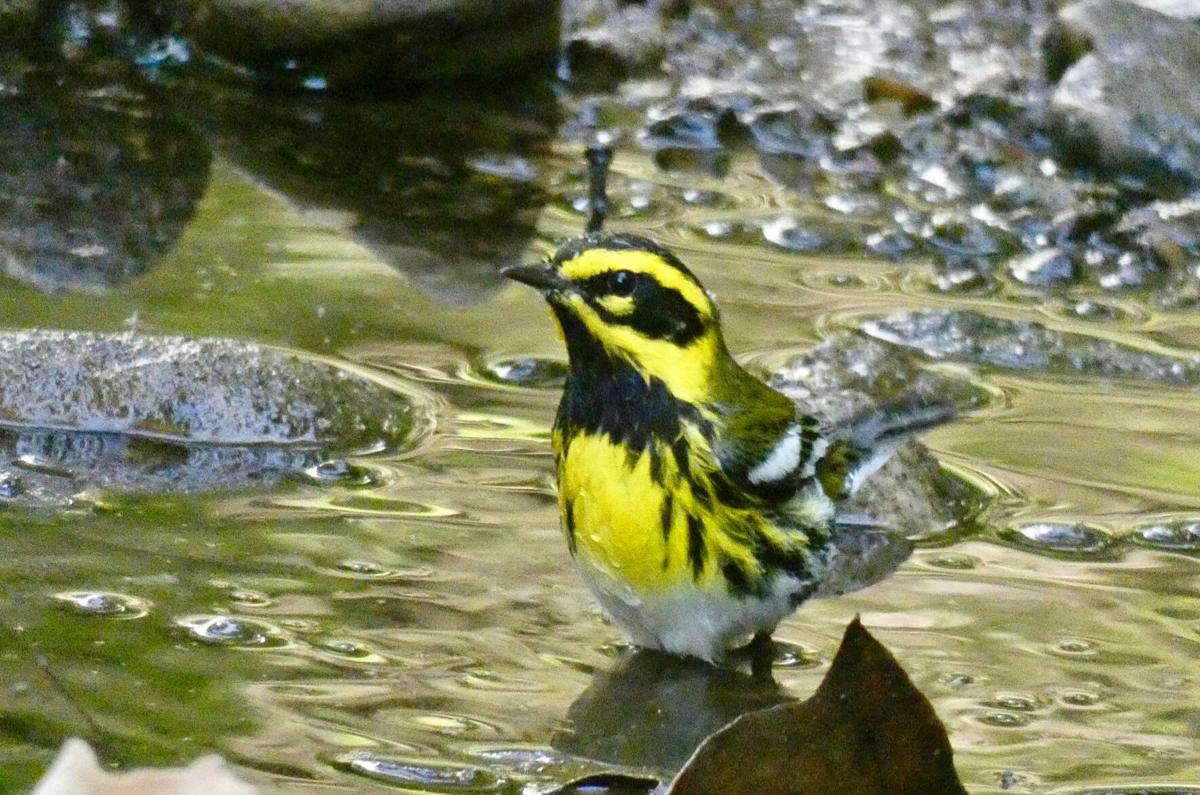 The Townsend’s Warbler was hungry and thirsty. All night it had flown under the canopy of stars, finally visible after days of flying through smoke.

Weeks ago, it had set out from its breeding grounds in the old-growth forests on Vancouver Island, off Canada’s West Coast. It flew 20 miles across the ocean to the mainland and joined up with other insect-eating migrating birds, searching for food by day and flying by night. Smoke began to cloak the air until it could no longer see the stars. The warbler kept flying, feeling its way south, relying on its backup navigation system—the earth’s magnetic field.

The air grew hotter, sparks and ash lit up the night sky and the billowing smoke was so thick that the bird could not rise above nor sink below it. Fires were burning in places where, last year, it had stopped to rest and refuel. It kept on flying.

Near San Francisco, lightning storms and howling headwinds buffeted the tiny bird. Looking for a place to land, the disoriented warbler nearly collided with a tall building—confused by its brilliant lights eerily reflected in the smoke.

Some of its migrating companions dropped along the way, out of fuel and strength to carry on. The tiny warbler kept flying.

After more than two weeks of travelling, the Townsend’s Warbler reached Carpinteria just as dawn was breaking and the star-map starting to fade. It searched for the familiar refuge where it knew it would find insects to eat, water to drink. Spying the yard with oaks and water it landed.

It drank deeply from the bird bath, splashed the ash off its feathers, and started to forage for insects. It was home for the winter—its arrival something of a miracle.

This, of course, is an imagined scenario of a Townsend’s Warbler’s journey here this year, but it is not an unlikely one, according to experts I talked to about this year’s exceptional perils of migration.

More than 3.1 million acres have burned in California this year, part of a record fire season that still has months to go. A suffocating cloud of smoke has veiled the West Coast for weeks, extending sometimes to a height of 55,000 feet. For migrating birds, there is no escape. If they do find a good area to refuel, they may stop over for several days and try to rebuild fat reserves to carry on.

I reached out to researcher Andrew Farnsworth of Cornell University, who tracks migrating birds by weather surveillance radar. Cornell’s BirdCast (birdcast.info) site features real-time migration over the continental U.S. If you type “Santa Barbara” into the website’s search bar, it forecasts how many birds are predicted to be on the move each night.

It’s hard for me to absorb that since 1970 we have lost 3 billion birds, nearly one out of three across North America according to the most rigorous population assessment ever done.

“This year,” Farnsworth said, “There may be hundreds of thousands or possibly millions of birds dead. There are so many factors: pervasive wildfires, smoke asphyxiation and toxicological issues.” August and September were the hottest on record, and withering drought. And now we are facing yet another heat wave.

Biologists believe many birds may have been forced to flee the fires before they had put on needed fat reserves for the long migration. Then they died of starvation along the way.

Warblers typically double their weight with fat before they migrate. But they are losing their refueling stops. It’s like driving from BC to California and finding every familiar gas station closed.

Birds often return to the same places where they remember food sources. Birds that winter in California favor mixed oak-coniferous woodlands, chaparral and suburban parks. Townsend’s are also attracted to bird baths and gardens. Or look up into the oaks. You may see a brilliant warbler with a black ear patch bordered by yellow.

What can we do to help these birds struggling to make long commutes along the Pacific Flyway despite diminishing habitat, fire, drought and other challenges in a changing climate?

“Vote for the birds,” Farnsworth told me. “Seriously,” he said. The Migratory Bird Treaty Act of 1929 is under assault by various industries seeking to roll back historic protections.

Cornell Lab of Ornithology publishes a list of seven simple things we can all do to help birds:

1) Make windows safer with decals for the day and turning out lights at night.

6) Minimize use of plastics.

Nancy Baron leads communication workshops for environmental scientists and lives in Carpinteria. Thanks to Andrew Farnsworth and Amanda Rodewald of Cornell University, Richard Cannings, and John Callender. The next Carpinteria Birders’ meeting is Oct. 8. You can learn more at carpwithoutcars.org/carpinteria-birdwatching-classes.