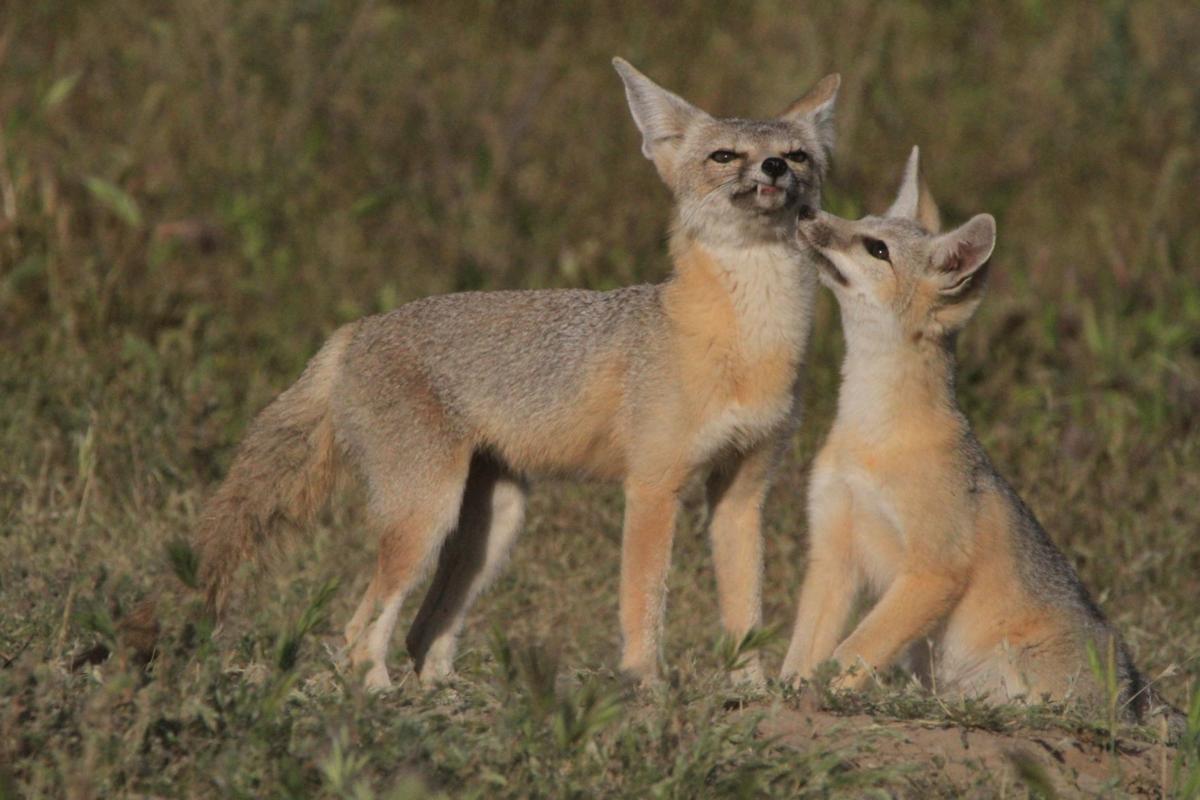 A San Joaquin kit fox dad is greeted by one of his six pups. 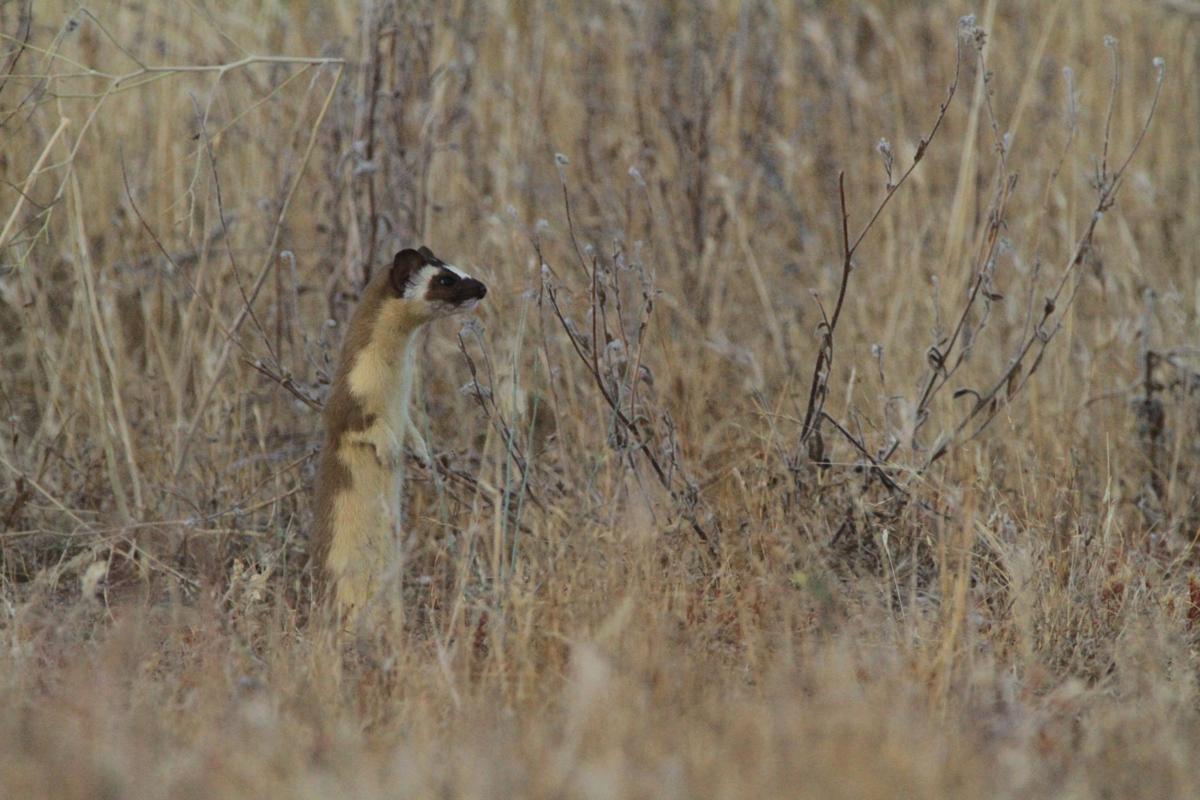 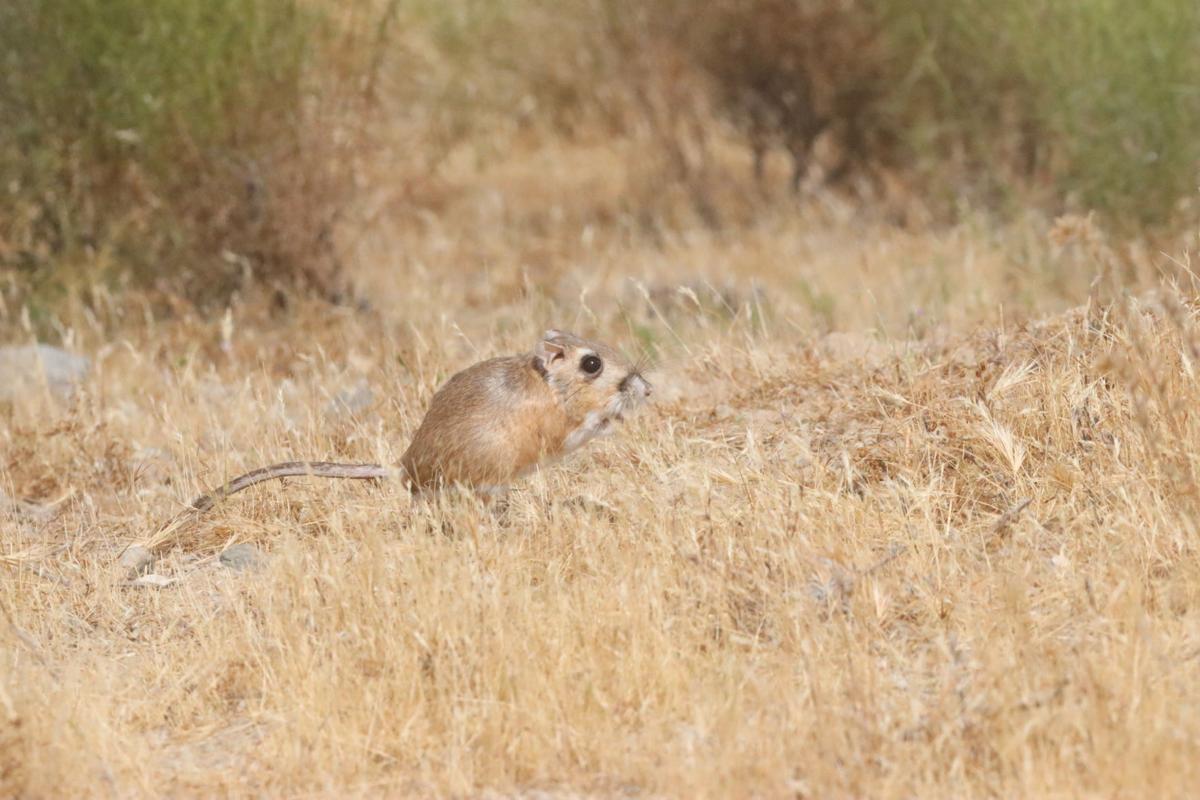 Giant Kangaroo Rats drum their feet on the ground to communicate with each other. 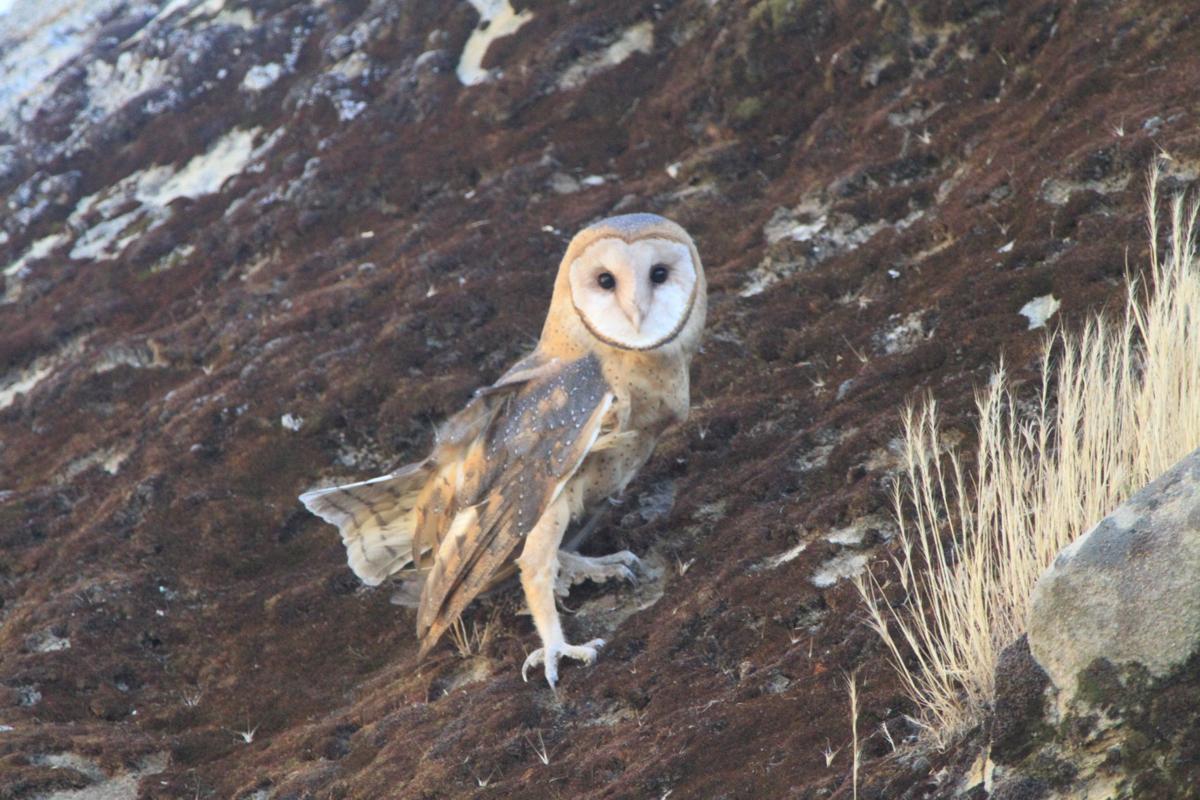 A barn owl clings to a bed of lichen near its sandstone nest. 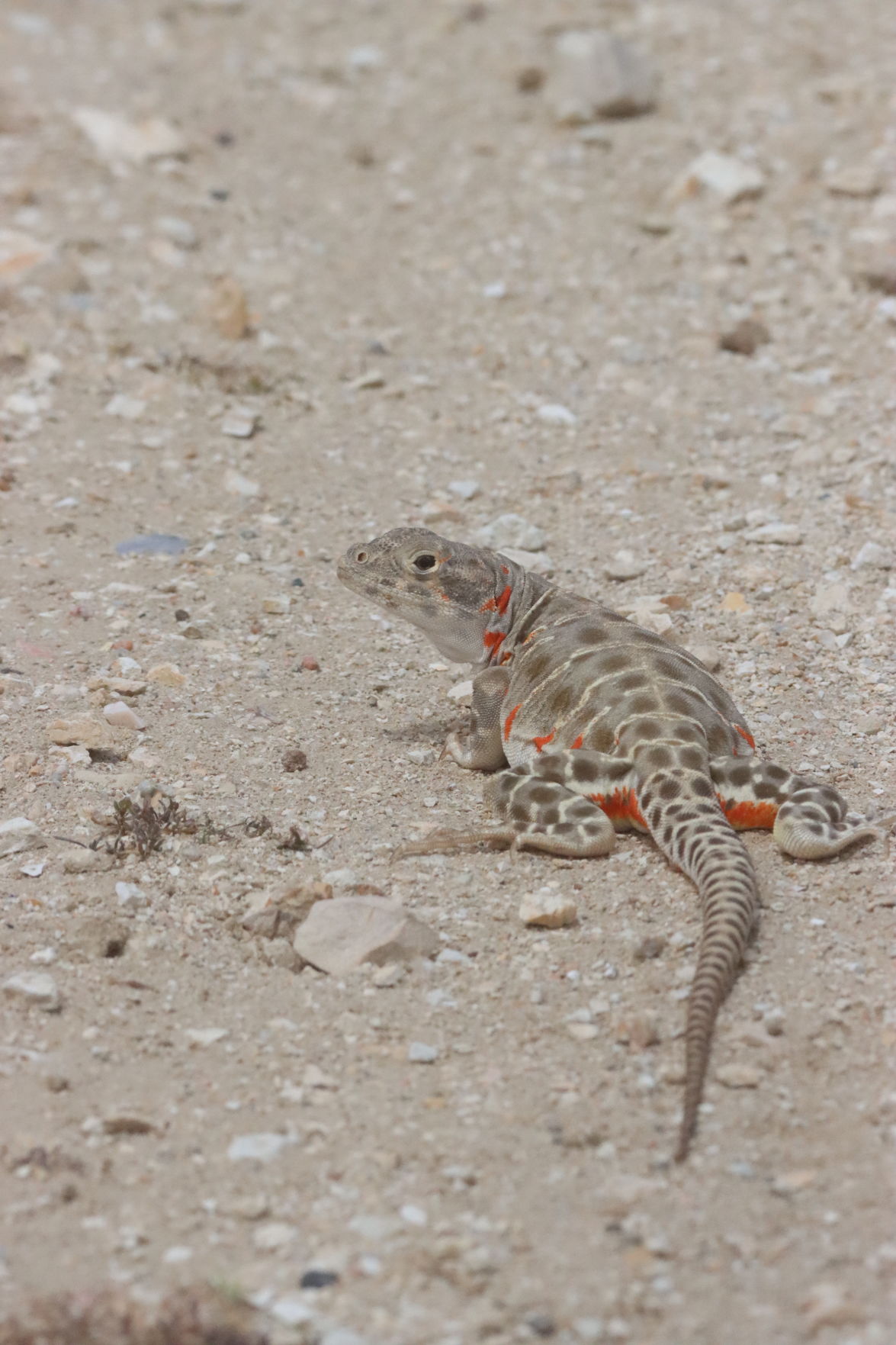 A pregnant female blunt-nose leopard lizard peers over her shoulder in the midday sun.

A San Joaquin kit fox dad is greeted by one of his six pups.

Giant Kangaroo Rats drum their feet on the ground to communicate with each other.

A barn owl clings to a bed of lichen near its sandstone nest.

A pregnant female blunt-nose leopard lizard peers over her shoulder in the midday sun.

The grasses had been mowed down to the nub around the countless burrows built by busy giant kangaroo rats (GKR), the keystone species of the Carrizo Plain National Monument.

Prey for a host of predators big and small, yet many of their predators utilize GKR burrows as their own, making homes for San Joaquin kit foxes, badgers, long-tailed weasels, Western Pacific rattlesnakes, blunt-nosed leopard lizards and burrowing owls.

I was sitting on a kit fox den for at least eight hours patiently waiting and hoping for some behavior amongst the six pups inside. It’s a unique ecosystem the Carrizo Plain, where everything centers on the GKR burrows. Antelope ground squirrels (AGS), a reliable prey source for kit foxes, also double as a distress signal for the smallest canid on mainland North America. When the kit foxes are out in the open and they hear the piercing chirp call of an AGS the kit foxes react quickly, standing alert or diving into any number of entry points of a specific den site. Golden eagles and coyotes are always on the lookout for the endangered kit fox.

Finally, the pups emerged, and they were much more active when their dad was outside the den standing watch. Otherwise, they just lie around. An hour of jostling, wrestling and greeting dad an hour before dark and the pups were finished for the day. Virtually every night, as soon as it gets dark, their dad leaves the den on the hunt for GKRs and AGSs.

I’ve always been motivated for photographing landscapes, wildflowers, wildlife, rock art, ranch buildings on the Carrizo Plain, but the last 50 days I was especially motivated. My first photo book will be published and released by late 2020. It’s a culmination of 14 years of photography and those last 50 days. The book will be 116 pages of photos, half of which are slide film captures. I was a late convert to digital. However, 2017 and 2019 were Super Bloom years, a long wait since the last one in 2010, so I really wasn’t feeling stressed about experiencing another bloom. My book will also contain an intro by me, a foreword by Neil Havlik, the president of the Carrizo Conservancy and three essays written by me focusing on Flora and Fauna, The Sweeping Plain and Reflections.

Going into 2020 though, I felt a sense of urgency to better the wildlife images I already had, and for whatever reason things came together for me. I found multiple kit fox dens spread out across the Carrizo Plain. There were multiple barn owl nests, one super active burrowing owl den, too many antelope ground squirrels to count, more close calls with Western Pacific Rattlesnakes than I cared to count, bugling tule elk and very curious pronghorn antelope.

Masked bandits of the grasslands

Prior to the winter and spring of 2020, I had only seen one badger and one long-tailed weasel during my entire time spent on the grasslands going back to 2006. Both those species became my nemesis animals this past spring.

You know when you have that feeling when something doesn’t feel right? A couple trips ago I was sitting on a reliable kit fox den and it just felt like it wasn’t active. Kit foxes keep multiple den sites and move around as the pups get older and are more mobile. I gave up after only two hours sitting in the wet grass. I moved over to their other site and had a bead on both, but nothing materialized at either site, but then something stirred at the originally site.

Long-tailed weasels are brazen little rascals, but it’s funny how prey animals know when the kit foxes have moved on to another site. The hotdog-built weasel stood tall out of one of the entry points of the kit fox den and proceeded to run through the entire site. It allowed me to approach from my belly, completely covered in stickers, but it was all worth it. It was comical watching it flush out GKRs but always coming up on the short end of the stick.

I didn’t have much hope when it came to a badger. Their denning behavior is complex. One den can have 900 meters of tunnels and 40 openings. That’s some serious tunneling. During the first week of June I had aims for a badger out along Elkhorn Road in the southern corner of the National Monument. I was up at 3 a.m. in Carpinteria and on the Plain by 5:30. Once I hit the flats a badger rumbled out in front of me on the road. Even with its awkward gait and its loose hanging skin, it bolted ahead knowing exactly where to go, it’s den. It gave me a look over its right shoulder and then vanished. I found the den and heard mewing down below. I waited all day, but nothing stirred.

I saw it again during the second week of June. It was a long way out, working a GKR den, pacing right and left, scratching and digging and then it was gone. Not every species was accounted for in my book, but it sure has been fun trying.