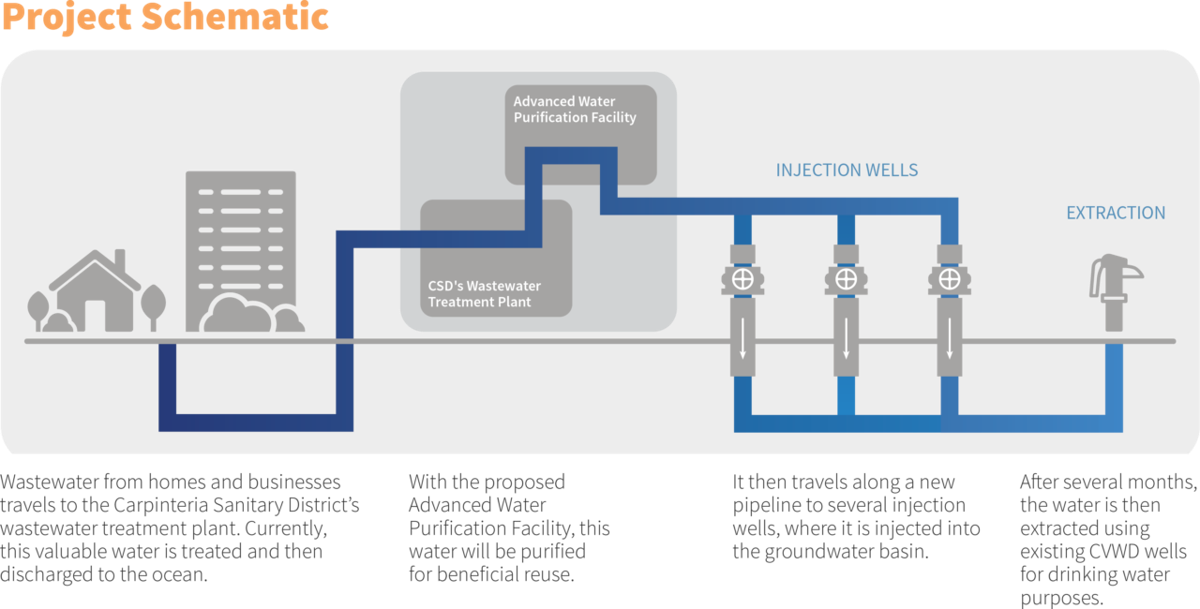 The CAPP project schematic illustrates the water’s journey from wastewater to water glass. 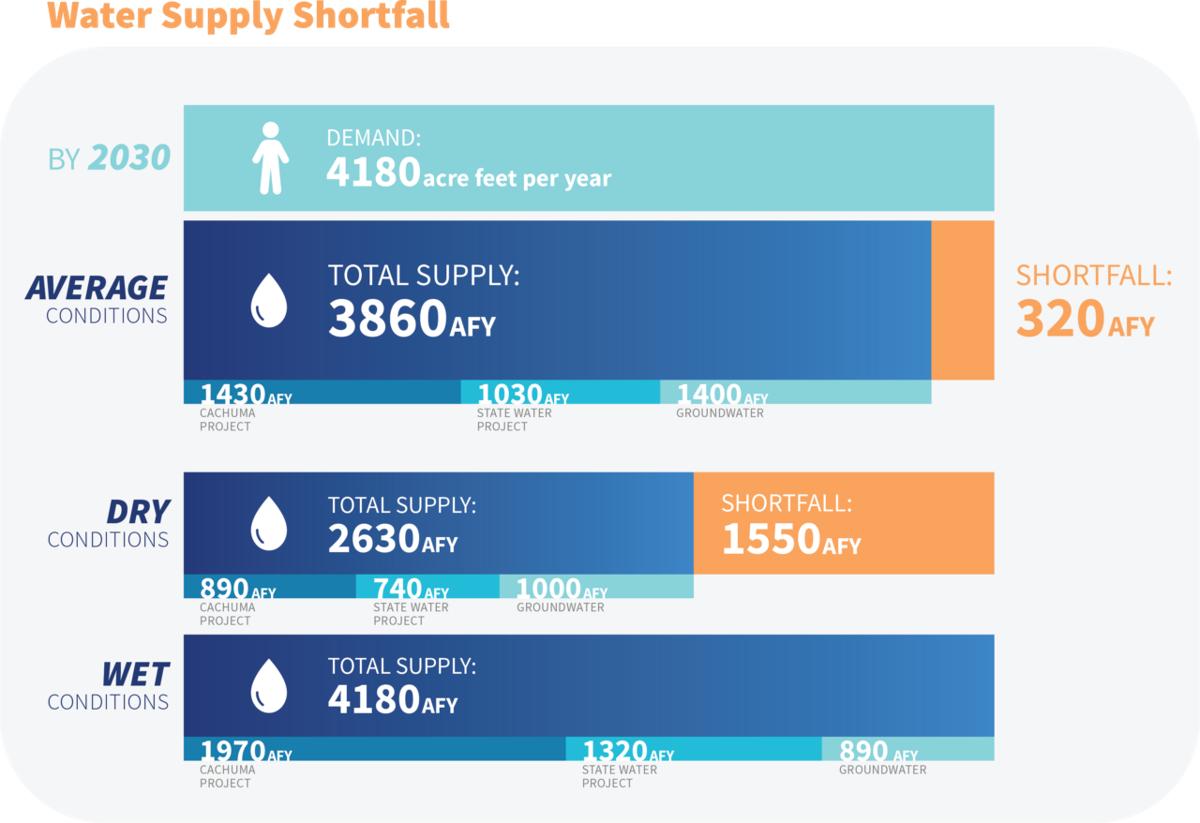 The CAPP project schematic illustrates the water’s journey from wastewater to water glass.

Like many communities throughout California, Carpinteria faces sustained and historic drought conditions. By 2030, the Carpinteria Valley Water District estimates that dry years will come with a water deficit that could be as high as 1,550 acre feet—approximately 505 million gallons of water—enough to fill 775 Olympic-sized swimming pools, or serve the average daily use of 6,200 local households.

In response to the shortfall, CVWD proposes a $25 million project to take wastewater that has been cleaned, purify it and then inject it into the groundwater basin to be used for various needs, including potable drinking water.

Advanced purification uses a multi-step treatment process, including membrane filtration, reverse osmosis and ultraviolet/advanced oxidation to produce pure water to replenish the groundwater basin. The same advanced purification system is currently being used in 10 Southern California cities, including Cambria and Oxnard, and has been scientifically proven to be safe, according to CVWD.

If approved, CAPP would take water that has already been cleaned at the Carpinteria Sanitary District (CSD) Wastewater Treatment Plant, purify it in a newly-constructed Advanced Water Purification Facility, then deliver it through a pipeline to injection wells for storage in the groundwater basin.

Currently, after treating wastewater, CSD pumps it into the ocean. Instead, CAPP proposes to reintegrate that water into the valley’s water supply. The CAPP project has the potential to provide 1.2 million gallons of water per day for storage in the Carpinteria Valley Groundwater Basin—enough to meet over a quarter of CVWD’s water needs—according to Robert McDonald, general manager of CVWD.

“We have a local water supply that’s drought-resistant, if not drought-proof,” said McDonald at the CVWD-CAPP public hearing on July 18, “to us, it’s a project that needs to happen.” CAPP, McDonald has stated, will replenish the groundwater basin with purified recycled water, creating a locally-controlled, drought-resistant drinking water supply.

CVWD is currently midway through the CAPP environmental impact review process (EIR), and has opened a 60-day public comments period (July 1 to Aug. 30). A final EIR draft is anticipated in November, with a final design completed over an additional year. Construction could commence as early as 2021.

At the July 18 hearing, Gary Blair of Seacoast Village, raised concern that his neighborhood would be “ground zero” for the proposed injection sites at St. Joseph’s Church field. “Well, it actually butts up to my back yard and will affect many of my neighbors,” said Blair. “It would have a diminished value on our property; there will be noise levels over 100 decibels, drilling 24/7 for three to six weeks.”

Blair further questioned why the drilling and injection sites have to be located within city limits, when the water district includes unincorporated Carpinteria Valley.

In response, McDonald explained that the structure of the aquifers is such in CVWD’s district there are parts confined and parts unconfined, with Foothill Road dividing confined/unconfined. For the most part, within city limits, the aquifer is confined, with water sandwiched between clay layers. On the other side of Foothill, in the nonurban areas, the aquifers are uncontrolled. “We can’t really control it,” said McDonald, “That’s the primary reason why we chose the sites we did, to keep it in the confined area.”

McDonald also fielded questions on property easements and project costs. McDonald stated that any property-owners who were asked to yield land for the project, would have their land appraised and participate in a negotiation for the sale.

The estimated cost, stated McDonald, is approximately $20 to 25 million, with a commitment from CVWD to fund at least 50 percent of the project with grants.

Resident Dennis Cutler praised the water district and encouraged swift action, stating, “I see this water source as not new. I see it as existing. It came from the sky. It came from us. It was potable. It became unpotable. Now it’s going to be potable again. I see that as pretty straightforward. We’re not widening the highway. We’re not bringing it in from Hoover Dam. It’s here.”

Debra Herrick has been CVN's managing editor since 2018. She enjoys telling the stories of Carpinteria Valley’s people and unpacking the community’s most pressing issues. Debra is also a features writer and photographer for Carpinteria Magazine.