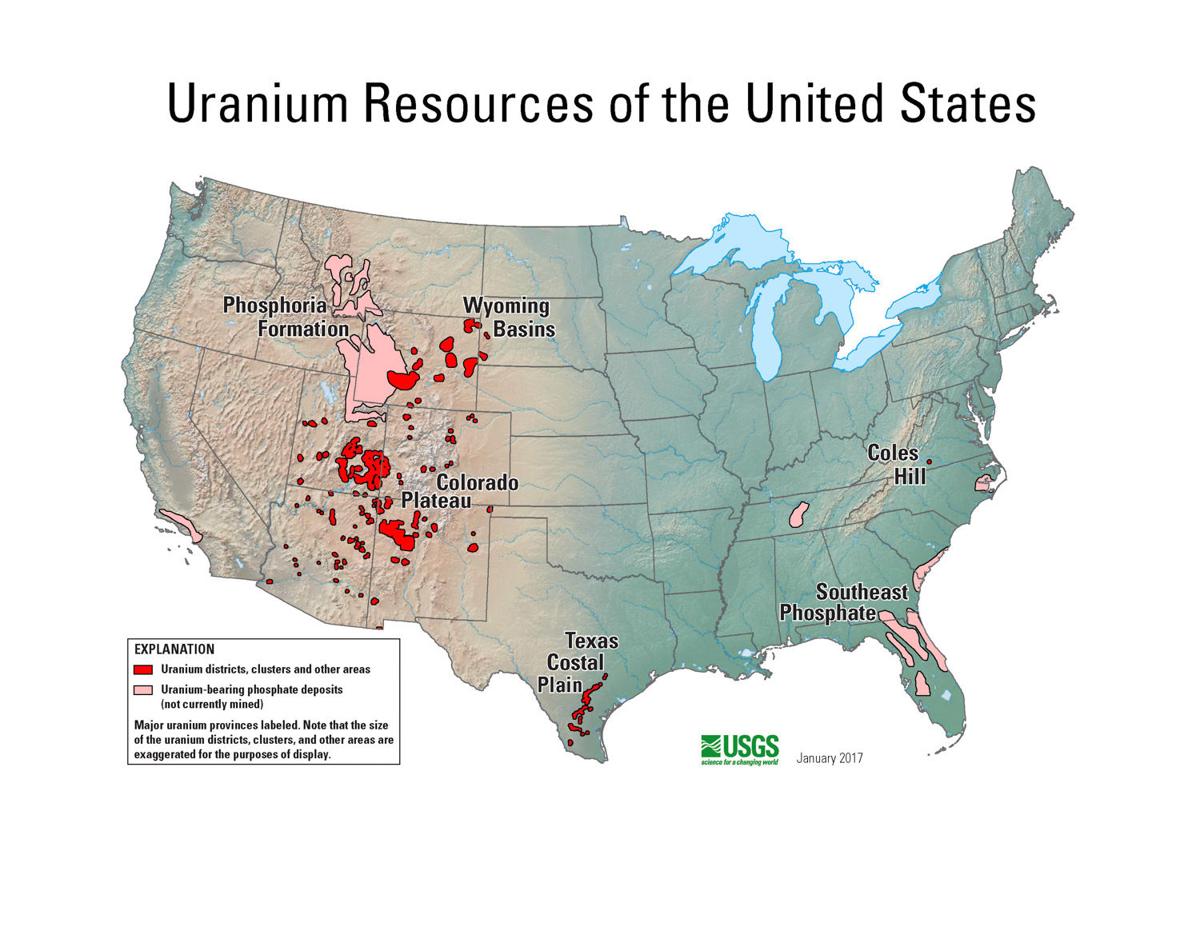 While not mined currently, uranium deposits underly national forest land in Santa Barbara and Ventura counties, according to a 2017 map by the U.S. Geological Service. 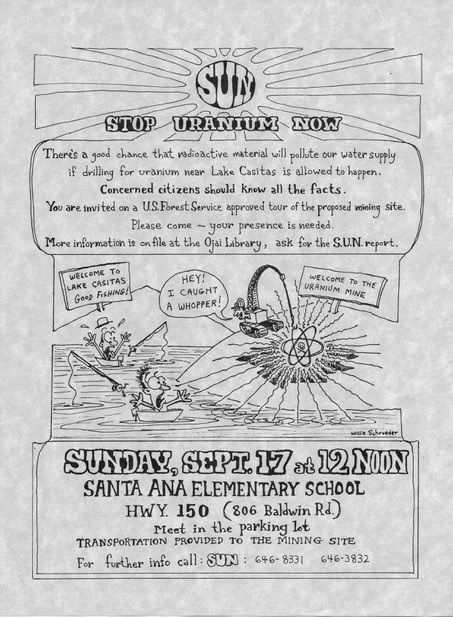 An old poster drawn by Willie Schroeder for the resident-organized Stop Uranium Now movement that helped stop uranium exploration in the Ojai area in the 1978.

While not mined currently, uranium deposits underly national forest land in Santa Barbara and Ventura counties, according to a 2017 map by the U.S. Geological Service.

An old poster drawn by Willie Schroeder for the resident-organized Stop Uranium Now movement that helped stop uranium exploration in the Ojai area in the 1978.

In a report released in late April, a working group assembled by President Trump has recommended several steps to revive the nation’s uranium mining industry, including expanding access to uranium deposits on federal lands and fast-tracking environmental reviews to speed the permitting process, according to a statement from Los Padres ForestWatch. The report could revive past attempts to mine uranium in the Los Padres National Forest in San Luis Obispo and Ventura counties, including a tract of land near Lake Casitas in the Ojai Valley, a source of drinking water for Carpinteria Valley Water District.

Many of the report’s recommendations will require additional action before taking effect, such as changes to agency rules or regulations, or passage of legislation. But if the recommendations are ultimately enacted, conservation groups are concerned that it would amplify efforts by the mining industry to rescind a 20-year moratorium on new mining claims next to Grand Canyon National Park.

Locally, conservation groups are keeping an eye on whether the report could resurrect historic uranium mining activity in the Los Padres National Forest, including an old uranium claim near Lake Casitas in the Ojai Valley. Uranium mining also occurred in the La Panza Range in San Luis Obispo County, and in Ballinger Canyon in Ventura County.

One company proposed a plan to explore dozens of uranium mining claims in the Santa Ynez Mountains near Ojai. The most controversial of these proposals occurred in 1978, when the Homestake Mining Company submitted a plan to explore for uranium deposits in the Los Padres National Forest near Lake Casitas in Ventura County. The plan included exploration of 36 uranium mining claims in the Coyote Creek drainage between White Ledge Peak and Superior Ridge, including nearly two miles of road construction and the drilling of 76 test holes. The Forest Service approved the mining plan later that year, opening the door to eventually allow the construction of an open-pit uranium mine directly upstream from the main source of drinking and agricultural water for the cities of Ojai and Ventura.

Residents organized to form Stop Uranium Now, and in response to widespread public outcry, the Interior Secretary in 1979 placed a three-year moratorium on mining around Lake Casitas, declaring 64,000 acres off-limits to uranium mining and exploration. The withdrawal was then extended for an additional 20 years, the maximum amount of time allowed by law. The mineral withdrawal expired in 2004 and has not been renewed since, leaving the area vulnerable to future mining proposals.

Further north, small-scale uranium exploration and mining boomed in the 1950s in the La Panza Range east of San Luis Obispo. Two decades later, the Lomex Corporation of Texas acquired mining claims across 1,140 acres of federal land in the Los Padres National Forest. The company’s exploration plan was approved by the Forest Service in the 1980s but was eventually cancelled amidst public opposition led by a local organization called Oak Tree Alliance.

While no uranium mining currently occurs in the Los Padres National Forest, the region does contain the only uranium-bearing phosphate deposits in California. Most of those deposits underly national forest land in Santa Barbara and Ventura counties, according to a 2017 map by the U.S. Geological Service.

The report adds to a long line of actions by the administration to expand uranium mining on federal public lands. In 2018, the Interior Department placed uranium on the country’s “critical minerals” list even though it didn’t meet the definition of the term. In 2019, the Commerce Department urged the expansion of “critical minerals” mining on federal public lands. And earlier this year, the Forest Service announced that it was revising regulations governing mining of uranium and other materials in national forests.

On the eve of the Memorial Day holiday weekend and during a global pandemic, the Trump administration approved a new oil well and pipeline in Carrizo Plain National Monument. It would be the first well drilled in the monument since it was established in 2001, according to a statement from Los Padres ForestWatch.

The Bureau of Land Management originally approved the well and pipeline two years ago but withdrew that approval in July 2019 after Los Padres ForestWatch and Center for Biological Diversity filed objections. The conservation groups cited the well’s potential harm to wildlife, views and the climate.

“While many of us are worried about basic needs during a time of crisis, the Trump administration is busy catering to the oil industry at the expense of people and the planet,” said ForestWatch Executive Director Jeff Kuyper. “The Carrizo Plain National Monument is one of our region’s most precious wild places and deserves better than this.”

The oil well and pipeline would harm threatened and endangered wildlife and mar scenic views. This fossil fuel development would violate several laws, including the Endangered Species Act and National Environmental Policy Act, as well as the monument’s resource-management plan.

The proposed well site is located at the base of the Caliente Mountains, inside the western boundary of Carrizo Plain National Monument. The area is home to several protected species, including threatened San Joaquin antelope squirrels, endangered San Joaquin kit foxes and a threatened flowering plant called the Kern mallow. Endangered California condors also visit this area with increasing frequency as they continue to expand into their historic range.

The oil well would be drilled on an existing oil pad that hasn’t produced oil since the 1950s. In 2016, the BLM approved the oil company’s request to formally abandon the pad and remove an old well, pipelines and other equipment from the site. The company also pledged to re-contour and reseed the pad and a half-mile access road leading to it, restoring the area to natural conditions. The work was never done, and now the BLM is attempting to backtrack on these abandonment plans by approving further development.

The new well is located on an existing oil lease that was “grandfathered” in under the monument proclamation signed by President Bill Clinton in 2001, but new development is supposed to comply with more stringent standards.

The well would be drilled in the Russell Ranch Oil Field, which covers approximately 1,500 acres of the monument and adjacent private land. In 2018, the field produced only 128 barrels of oil per day―0.03 percent of the state’s total oil production and one of the lowest-producing oilfields in the state. The field is reportedly nearing the end of its useful life.

When the California BLM withdrew its original approval of the well last year, it directed its Bakersfield Field Office to substantially revise its environmental assessment and consult with the U.S. Fish and Wildlife Service. But the BLM’s new decision continues to disregard significant environmental impacts and potential harm to the conservation values of the monument.