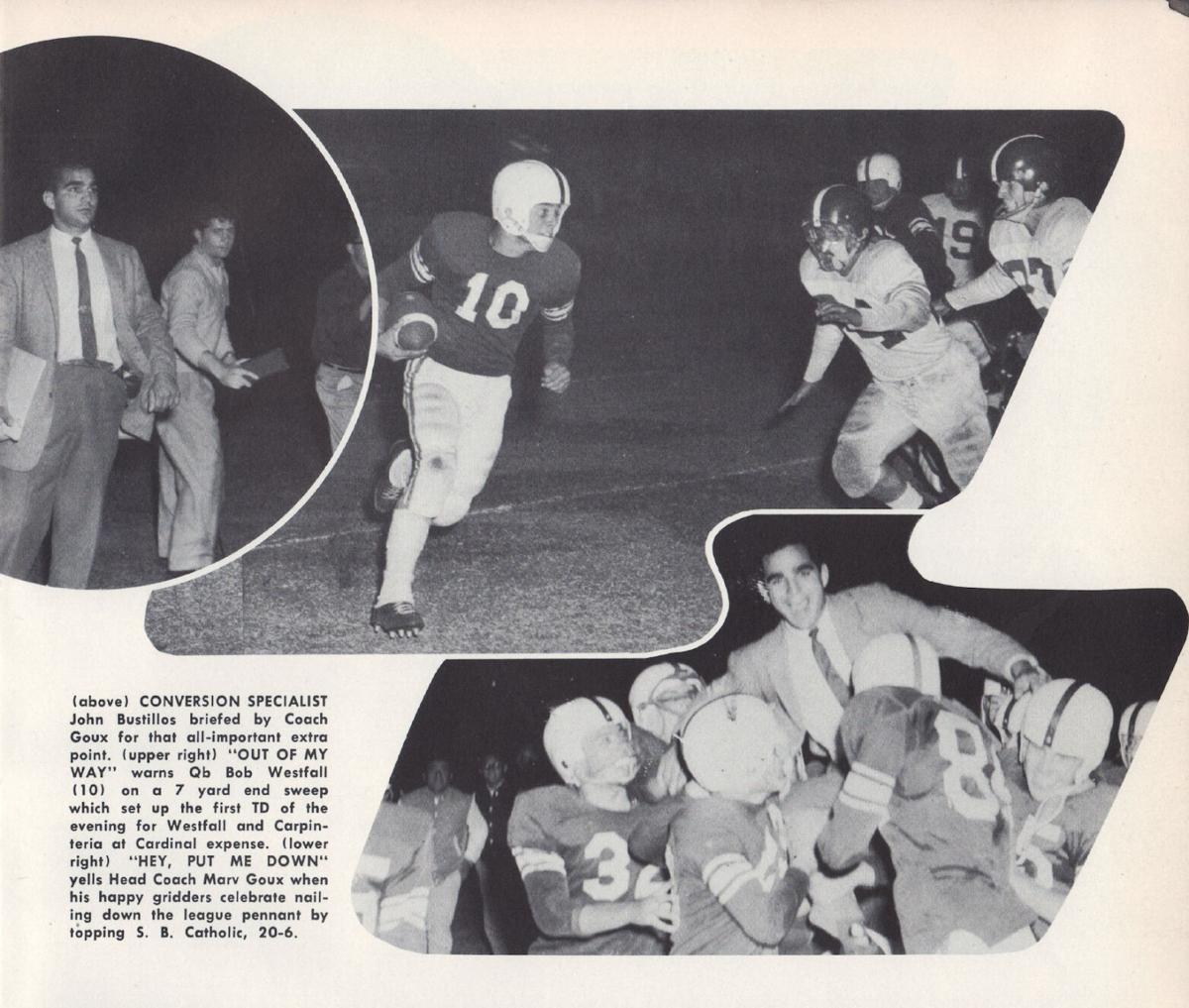 A collage of pictures from the 1956-57 Carpinteria High Yearbook shows Coach Marv Goux at the upper right corner; Bobby Westfall (#10) running an end sweep; and, Coach Goux hoisted on the shoulders of his happy players after defeating S. B. Catholic High (i.e., Bishop Diego). 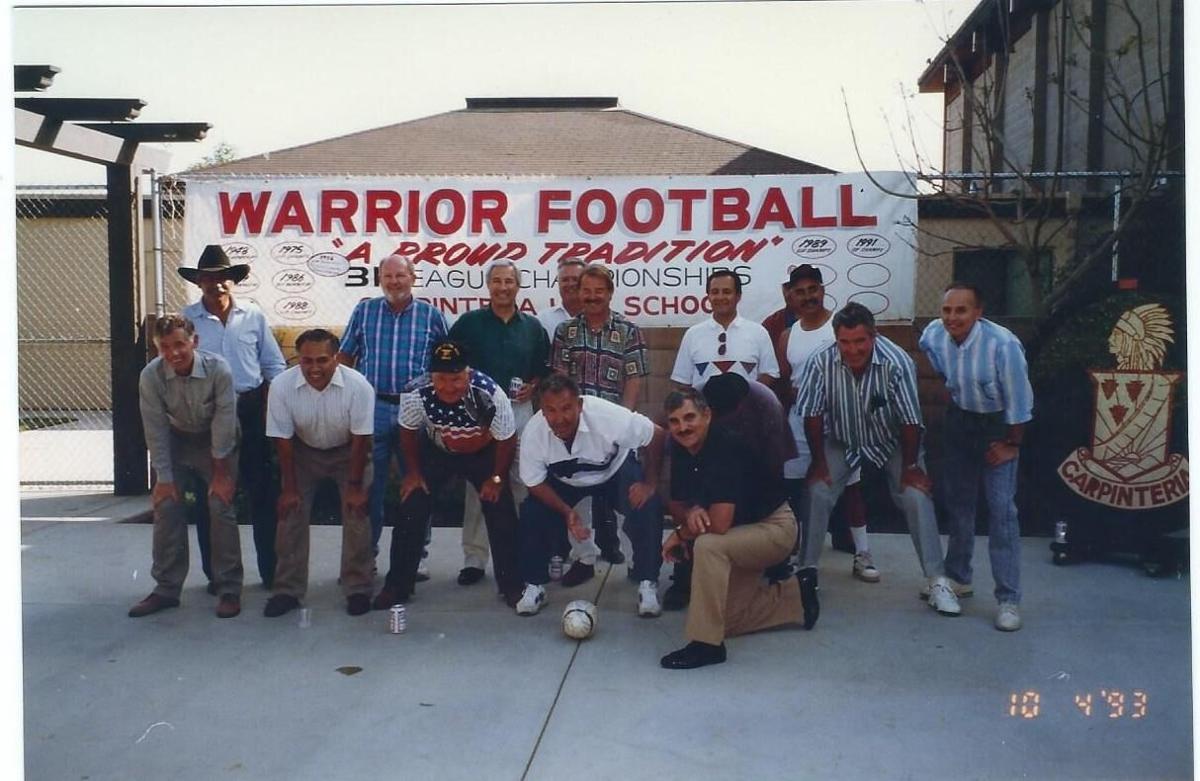 A collage of pictures from the 1956-57 Carpinteria High Yearbook shows Coach Marv Goux at the upper right corner; Bobby Westfall (#10) running an end sweep; and, Coach Goux hoisted on the shoulders of his happy players after defeating S. B. Catholic High (i.e., Bishop Diego).

With sports returning to television ever so gingerly, and many college and high school football conferences shut down because of Covid-19, sports diversions have jumped in to fill the void. A University of Southern California Trojan football website recently provided a series of articles honoring the program’s greatest players and coaches of all time. A particular position was unveiled each week. The Mount Rushmore Series recently featured USC’s best assistant coaches.  This caught my attention because a former Carpinteria head coach was sure to be the top choice. But, let’s back up a minute.

Carpinteria’s Warrior football tradition—and I don’t mean “fútbol” or soccer that has brought championships of late—started in 1928. Sometimes that meant six-man football, but mostly it was 11-man. The sport quickly became popular, and by the mid-1940s was an equally shared passion for both the Mexican-American and white communities.  The integration of the sport seemed to be the spark for a succession of powerhouse teams that won championships almost every year.

The 1948 team was the first to reach the California Interscholastic Federation (CIF) championship finals, but fell to Santa Paula.  There was a run of 11 straight Tri-Valley League Championships from 1946 to 1956. There were undefeated seasons in the run, but in the CIF playoffs, Carpinteria teams lost a few due to tie-breakers determined by the team that had the most first-downs. The first championship was finally won by Coach Lou Panizzon in 1975, and his teams went on to win three more. Ben Hallock, as coach, won another. Then, one of Panizzon’s former players, Coley Candaele, would add the last CIF trophy, in 2002, as the head coach.

Now, back to the USC football connection, one that is as long as the history of the Carpinteria program itself. Inspirational speakers from USC have graced many Warrior banquets. Well sir, Carpinterians who know their football will be disappointed to read that the profile of arguably USC’s greatest assistant coach has a glaring omission.  He is an inaugural class inductee of the USC Hall of Fame and the Rose Bowl Hall of Fame. He played at Santa Barbara High, Ventura JC, transferred to USC (1952–1955), coached at USC from 1957–1982, and coached for the Los Angeles Rams afterwards. He is Marv Goux (pronounced GOO). Notice that 1956 is missing from his career profile? That is a serious omission!

Marv Goux coached the Carpinteria High (CHS) football team during the 1956 school year. He led the Warriors to the Tri-Valley League Championship, undefeated until they were upended in the CIF playoffs by a larger school from South Pasadena. Players from the 1956 team are quick to point out that South Pasadena made it all the way to the final round of the CIF playoffs only to lose to Mater Dei. Mater Dei! A powerhouse then, a powerhouse to this day, often at the top of the heap, #1 in the nation!

If Marv Goux is an unfamiliar name to you, you might be thinking, “What’s the big deal, he was at CHS for only one year” (Actually, it was only ½ of a year!) Carpinteria football players who had the privilege of playing for Goux held him in awe.  His behavior, his language (often foul!), and his intensive dark look was fearsome, yet irresistible. He was animated, enthusiastic, intense, motivated and dynamic.  At 5’9”, he was as tough as they come. Walking into the brand-new fieldhouse at CHS Memorial Field in 1956, you might have found him in his skivvies, his back scarred from football injuries, wrestling with the players. Bobby Westfall, his quarterback that year, believes the Goux-led team has to be in the conversation for best Carpinteria Warrior football team of all time. The team’s talent with this peerless coach would give them the edge.

Goux’s laser-like focus towards excellence for the Carpinteria football program was reflected in other ways. Sal Campos, who had just joined the school district as a night custodian remembers Goux would drop whatever he was doing to greet and help him scrub sinks and toilets in the fieldhouse. And, Rich Medel remembers Goux asking his father, Lucio, to start a Boosters Club.  Lucio Medel, indeed, became the first president of the Carpinteria Warriors Booster Club in 1956.

After leaving Carpinteria to coach at USC, Goux would return periodically to check in on the Warriors, and the Warriors would go to him to pick up pointers from his mastery as an interior line coach at USC.  Panizzon remembers that he and big lineman Dave Goodfield visited Goux on the Trojan practice field not long after he left CHS.  Star USC quarterback Craig Fertig, who became a legendary Trojan, looked at the big, brawny Goodfield and commented, “Hey Marv, I thought you said all your Carpinteria players were small and scrawny.”  The Goux connection to Carpinteria football would continue.

Goodfield remembers Goux as a mentor for life, his old coach passing away in 2002.

Several players from Goux’s 1956 team still reside in Carpinteria.  Next time you see Panizzon, Goodfield, Westfall, Waldo Ramirez, Ernie Solano, George Ramirez, or brothers Joe and Danny Velasquez in town, ask them to tell you a Marv Goux story.  They will not disappoint.  In Panizzon’s book, “Carpinteria Warriors Football Records,”he writes “Coach Marv Goux, Mr. Trojan, was the head mentor of the 1956 Warriors. His brief tenure is still felt by many of the loyal fans. ‘Goux Stories’ are a delight at any social gathering of his former players.”