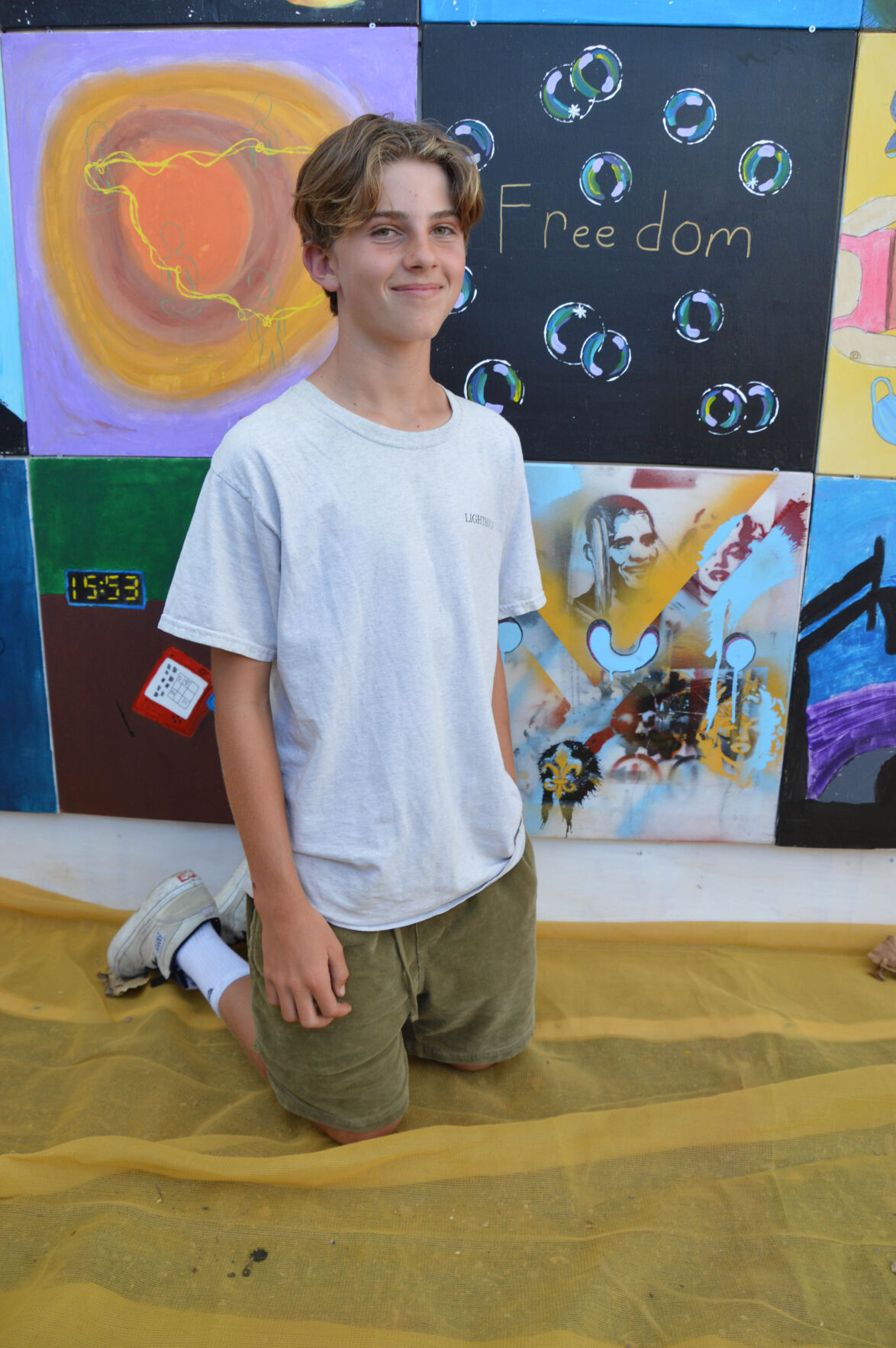 Luke Anderson, 13, is with his painting, “SMILE, stay positive.” 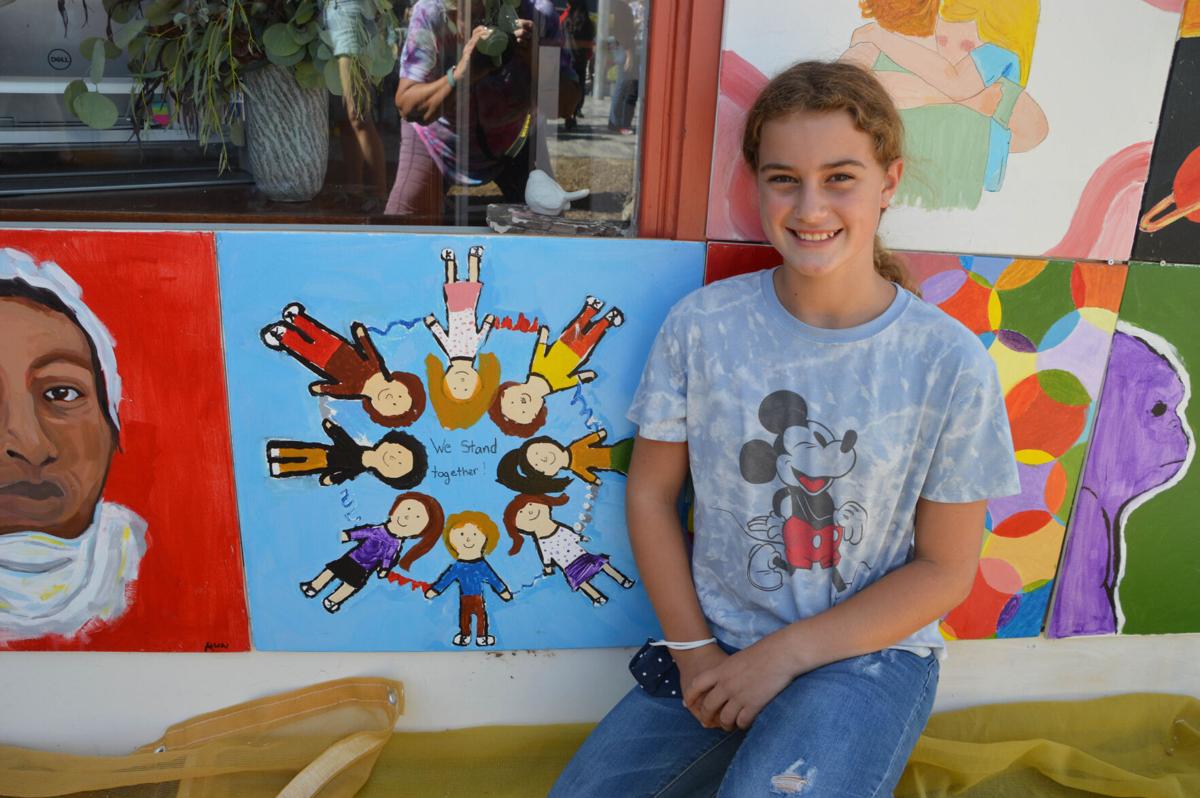 Callie Balch, 11, is with her painting, “We Stand Together.” 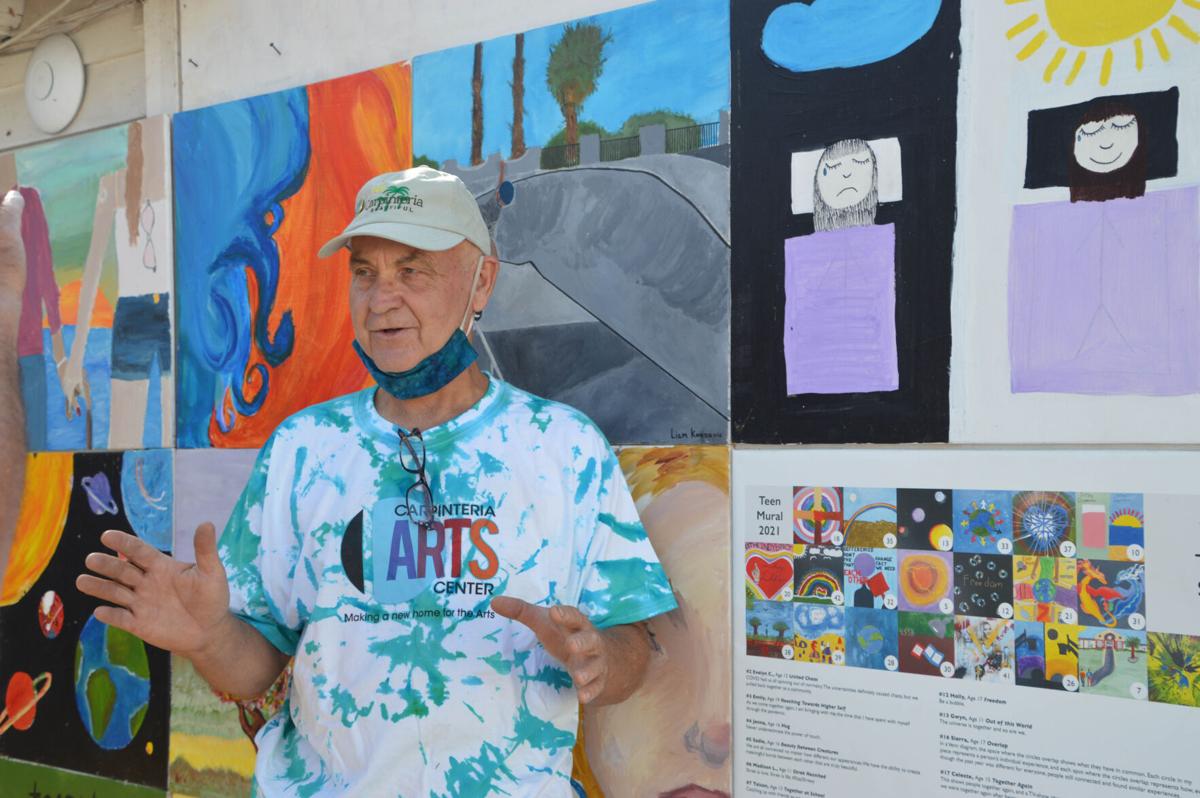 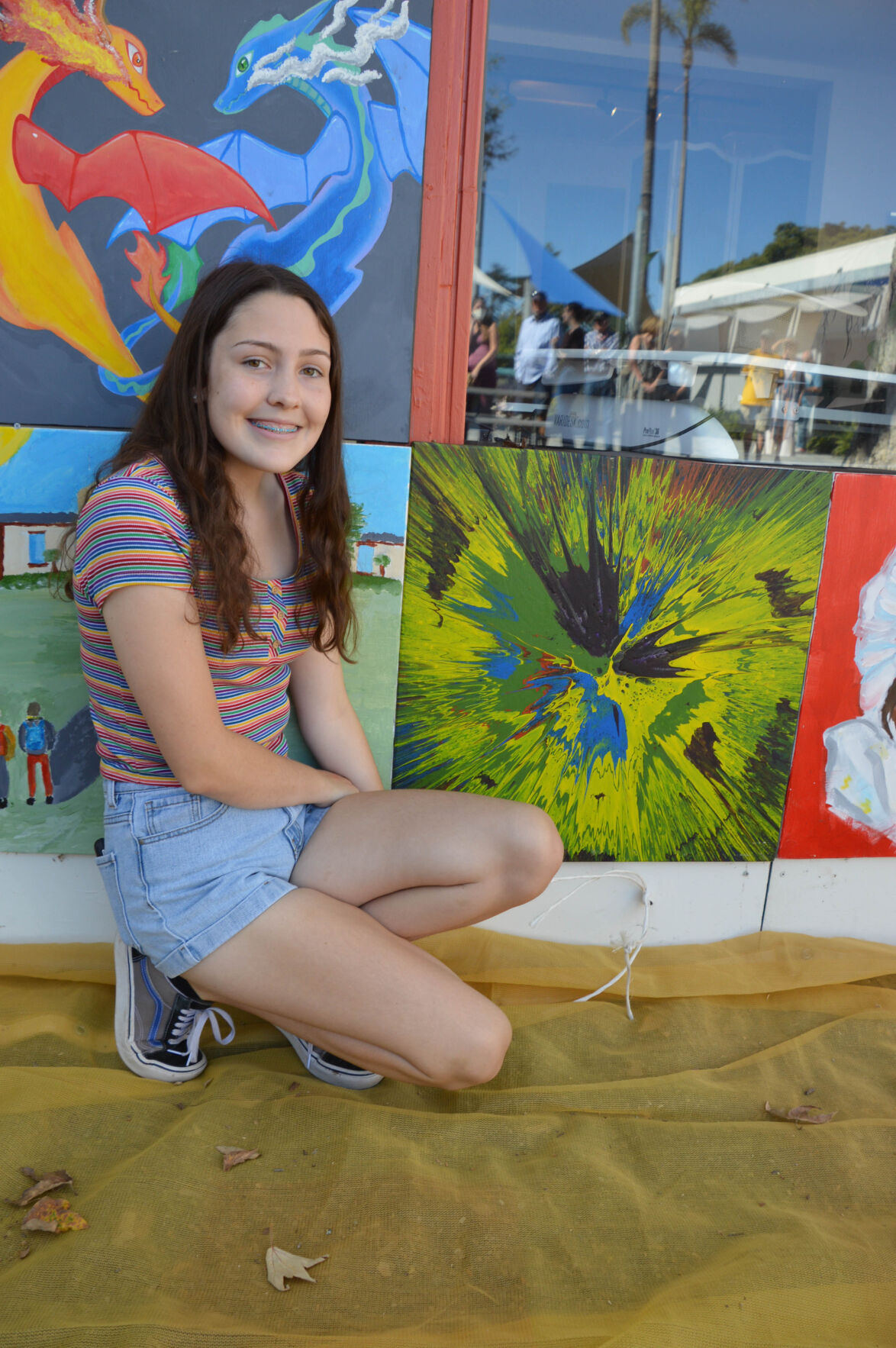 Evelyn Calkins, 13, is with her painting, “United Chaos.” 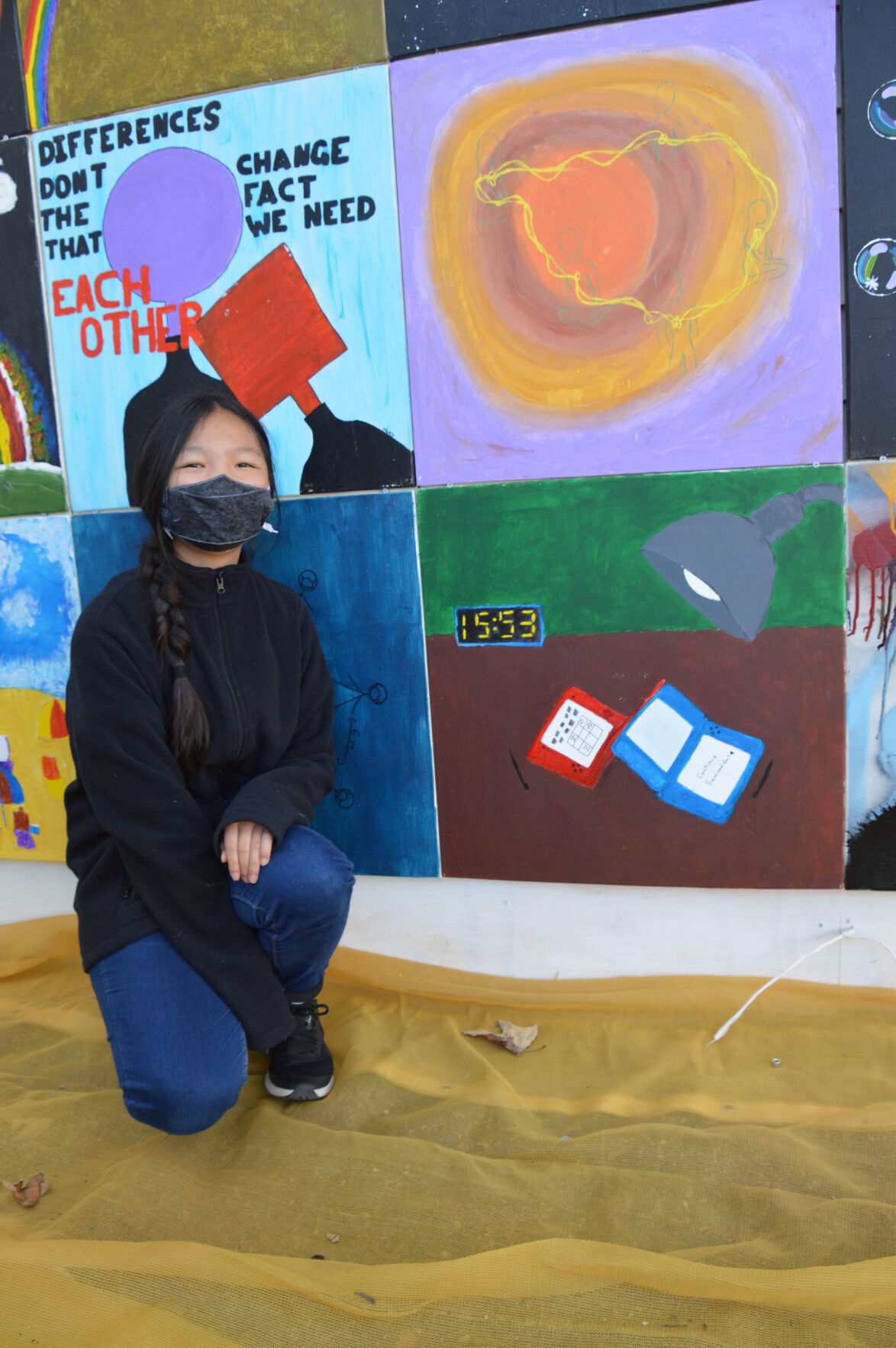 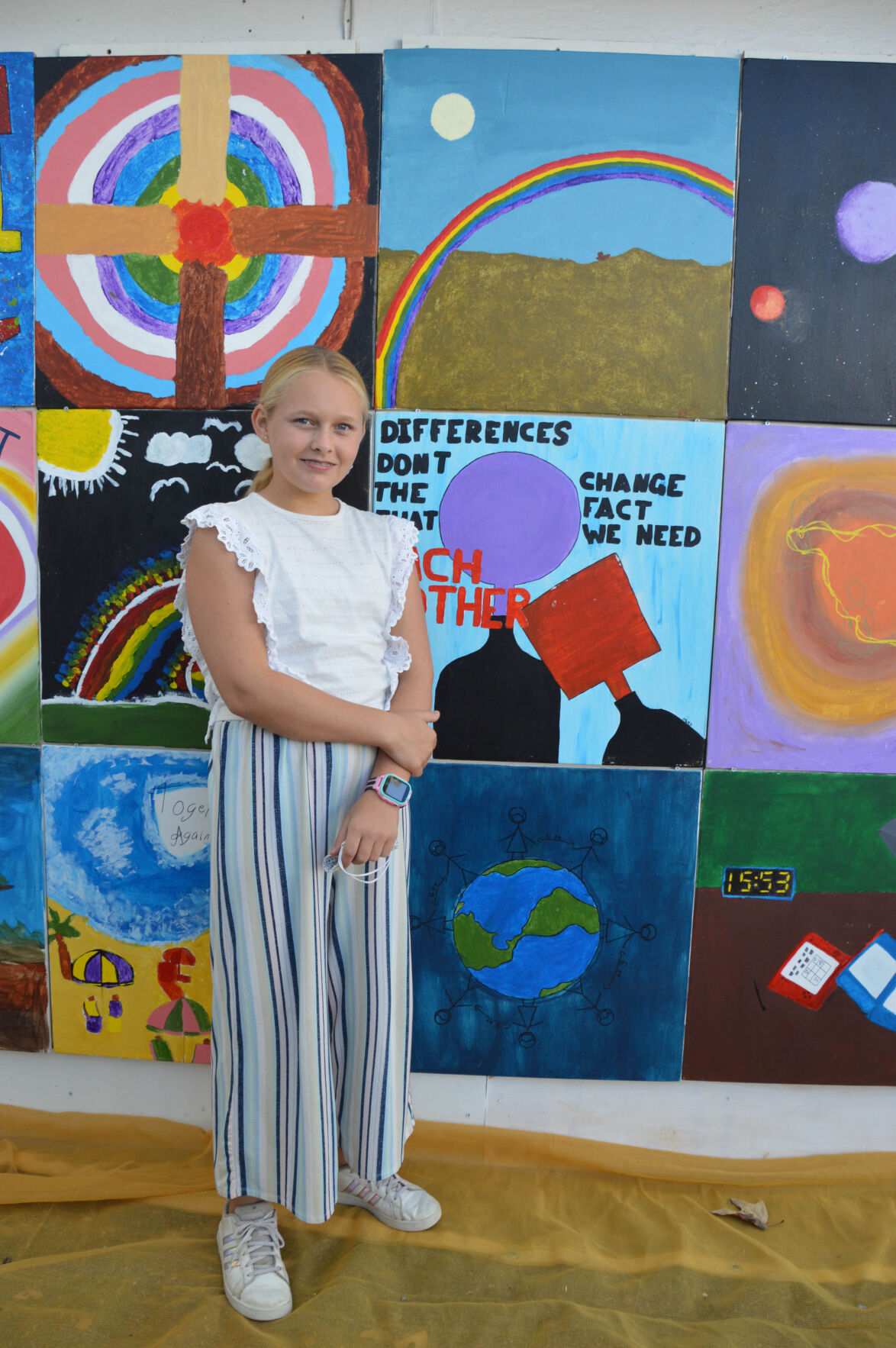 Evelyn Larsen, 13, painted, “The Calm after the Storm.” 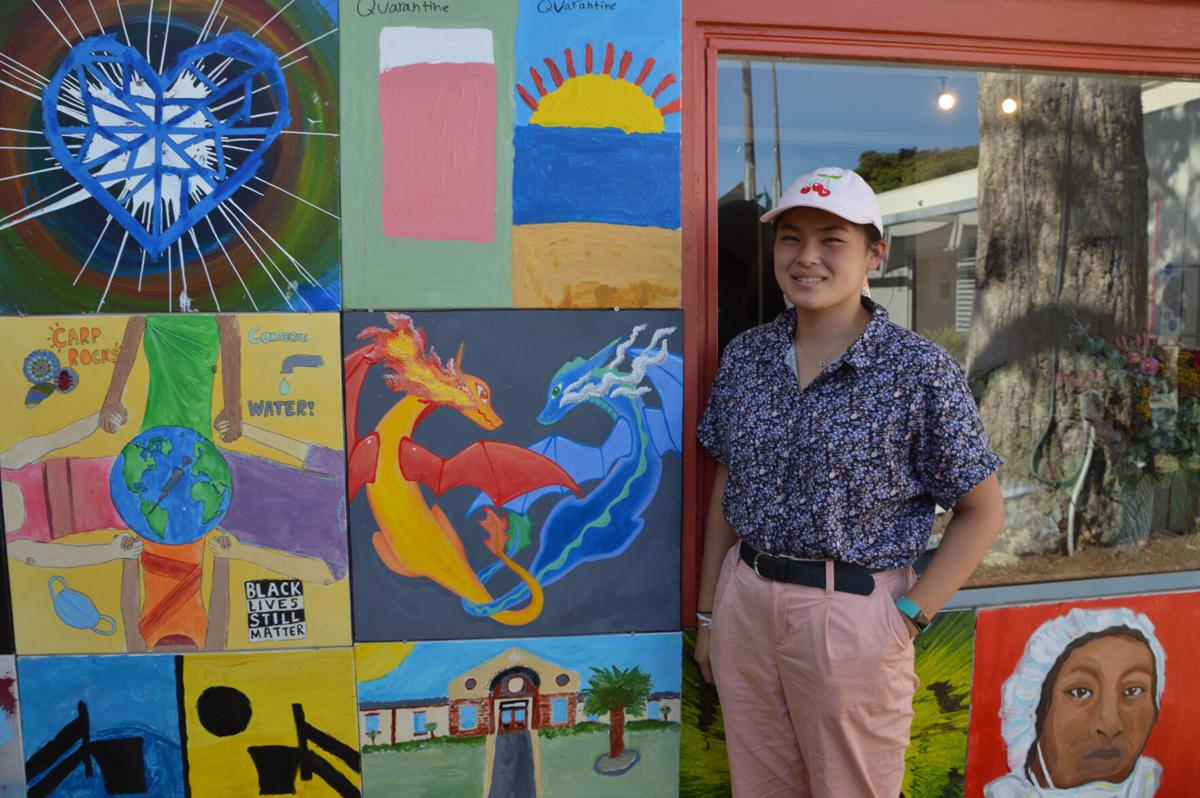 Emma Petersen, 17, is with her panel, “Opposites Attract. 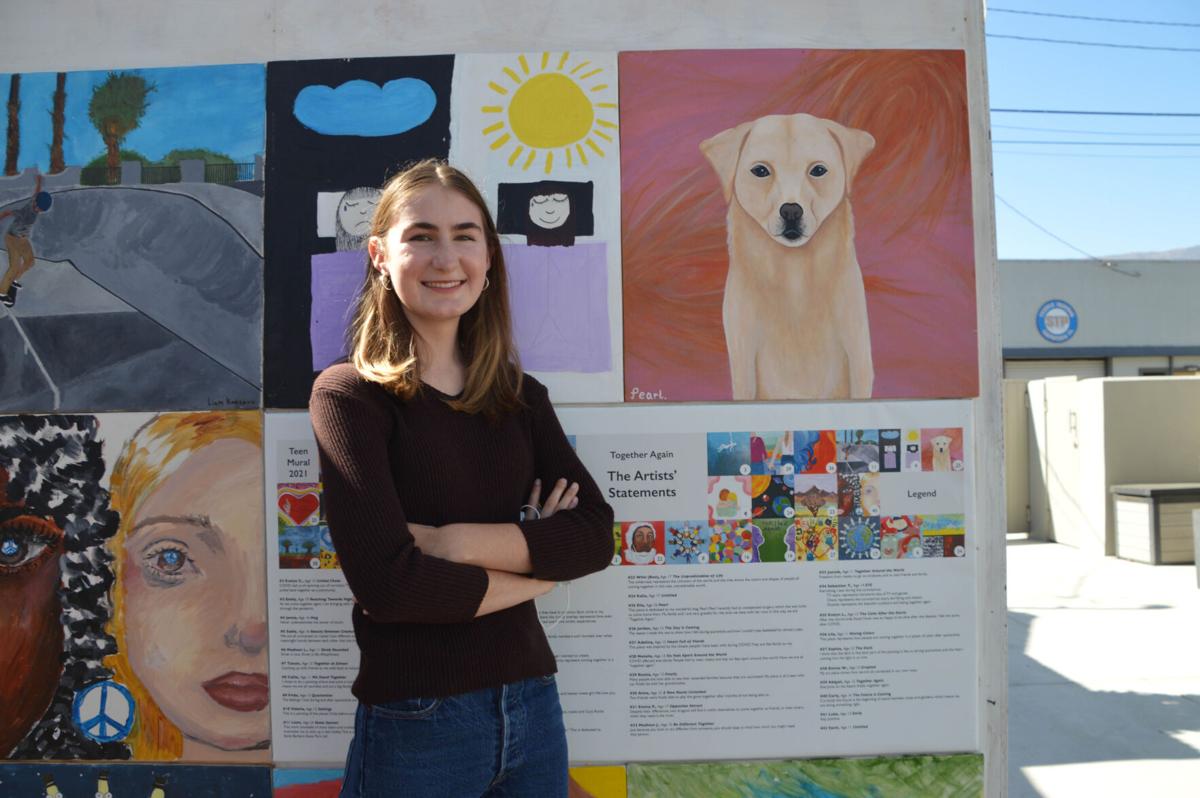 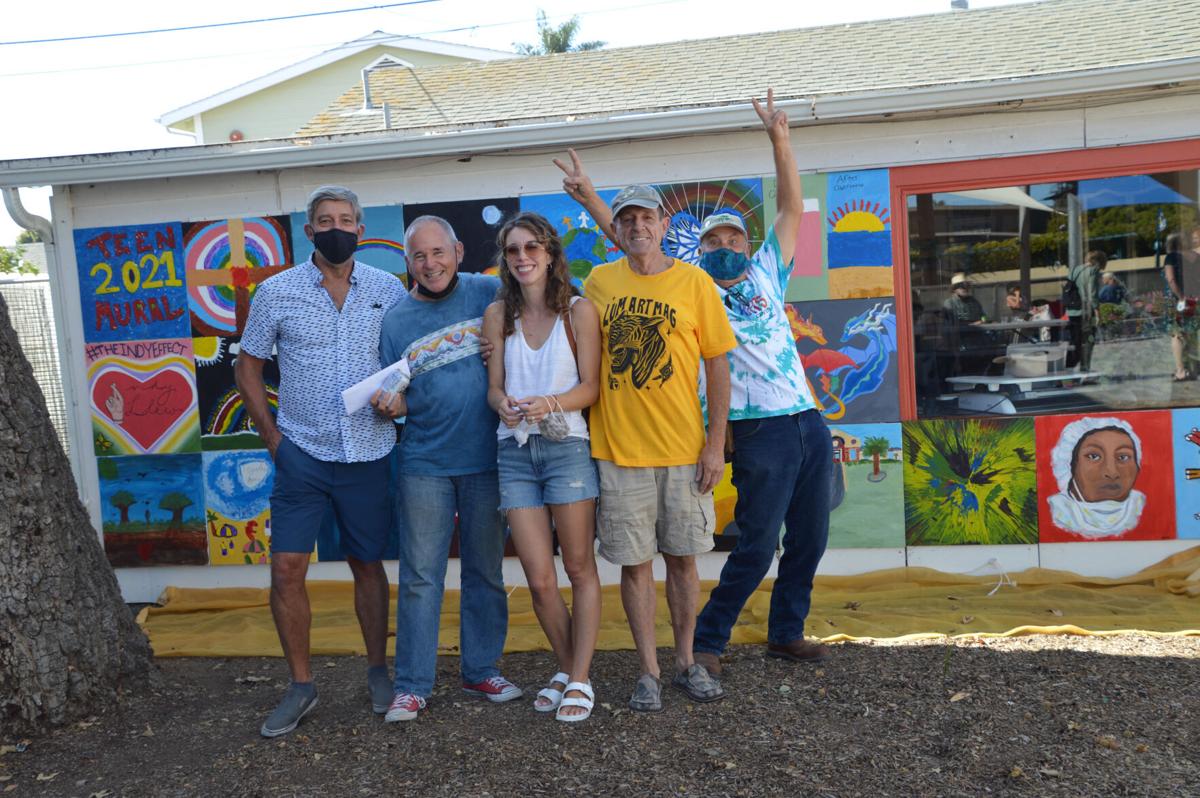 Luke Anderson, 13, is with his painting, “SMILE, stay positive.”

Callie Balch, 11, is with her painting, “We Stand Together.”

Evelyn Calkins, 13, is with her painting, “United Chaos.”

Evelyn Larsen, 13, painted, “The Calm after the Storm.”

Emma Petersen, 17, is with her panel, “Opposites Attract.

Thirty-nine teenagers participated in this year’s summer mural program at the Carpinteria Arts Center. In addition to the mural's title, “Together Again,” the project – led by artist John Wullbrandt – had an underlying theme of gratitude, said Janey Cohen in a speech at the mural’s unveiling on Sunday.

“In July, when John and I gathered all 39 of these panels together and looked at them, it was clear that the underlying idea being expressed in the paintings was gratitude,” said Cohen. “Central to this sense of gratitude were the health care workers who had worked and still are working tirelessly through the pandemic to allow all of us to gather in places such as here, together today.”

At the center of the largescale mural is a panel by Raven, 18, who dedicated her piece, a large portrait of a masked nurse dressed all in white, to healthcare workers.

“I wanted my piece to highlight an important reason why we are all ‘together again,’” she said in her artist statement.

This year, due to the Covid-19 pandemic, the artists worked on their panels at home. This structure – while a modification to the community youth art event in years’ past – allowed each artist to have more time to paint. Because they were at home and working independently, Wullbrandt noted that some artists were able toexpress themselves more completely “and in many cases worked in an uninhibited manner.”

Wullbrandt said that while it came with challenges for the program’s small group of volunteers working behind the scenes, it was important to keep the tradition of helping Carpinteria teens paint a summer mural.

“The pandemic forced us to reinvent the project so that it was in keeping with the ever-changing restrictions the general population has needed to continually adjust to,” he said, “…we got creative and ‘safety first’ was our motto.” The mural is sponsored by Carpinteria Beautiful and the Carpinteria Woman’s Club.

Each artist submitted an artist's statement along with their 2' x 2' section of the mural, Wullbrandt explained, recommending that viewers take the time to read the statements which are on the mural’s legend.

“You will be very surprised, entertained and in some cases reassured that the future of our community seems be a bright one in the hands of this up-and-coming generation,” he said.

Teens addressed a wide variety of interpretations of the “Together Again” theme. Jenna, 16, painted two people in an embrace in her piece “Hug,” saying, “Never underestimate the power of touch.” Abigail, 12, said her painting was about “everyone on the beach, finally together again.”

“The Day is Coming,” by Jordan, 12, depicts the same basketball hoop empty in the dark on one side and in the light in action on the other. “The reason I made this was to show how I felt during quarantine, and how I couldn’t play basketball for almost a year,” he said.

In her fantastical painting, “Opposites Attract,” Emma P. depicted two dragons intertwined. She described the painting as “despite their differences, two dragons still find it within themselves to come together as friends, or even lovers, when they need it the most.”

Wullbrandt said that he hopes the young artists see the mural as “a collaborative work of art that is unique, important, beautiful and something to be proud of.”

“We adults have much to learn when paying attention to these young citizens. I am proud to say they are my fellow artists and that they do fine work. Go see it. You will not be disappointed,” said Wullbrandt.