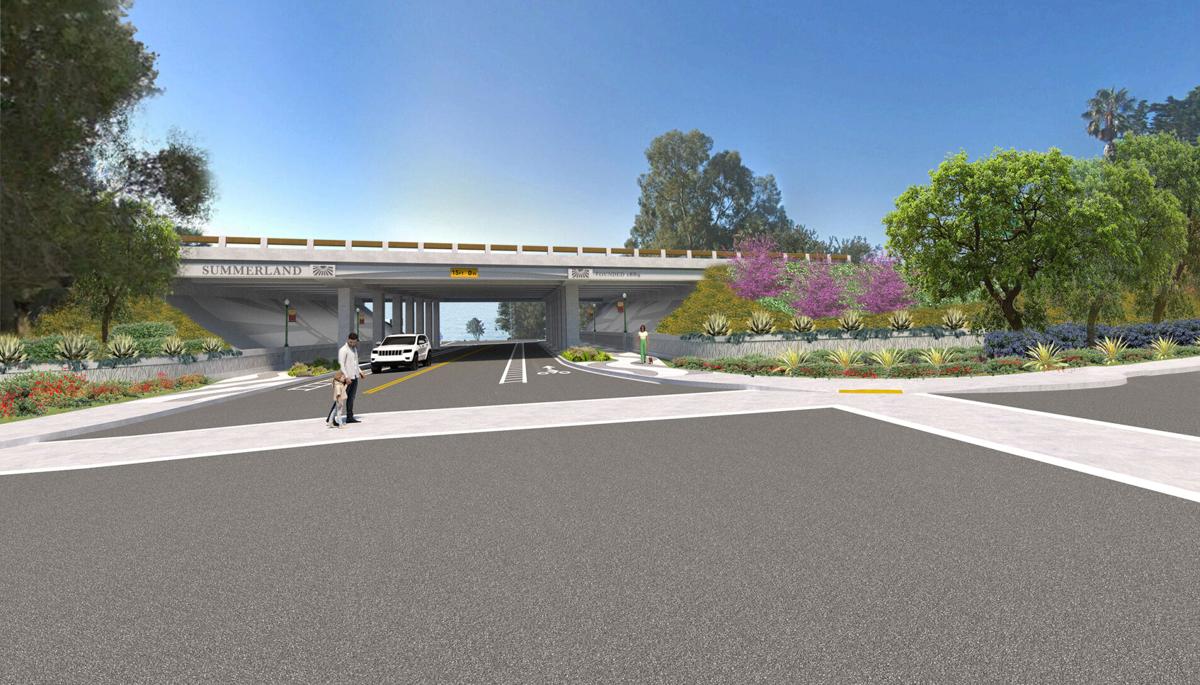 A rendering of the planned Evans Avenue overcrossing shows a safe crosswalk for pedestrians and a Class 1 bike lane. 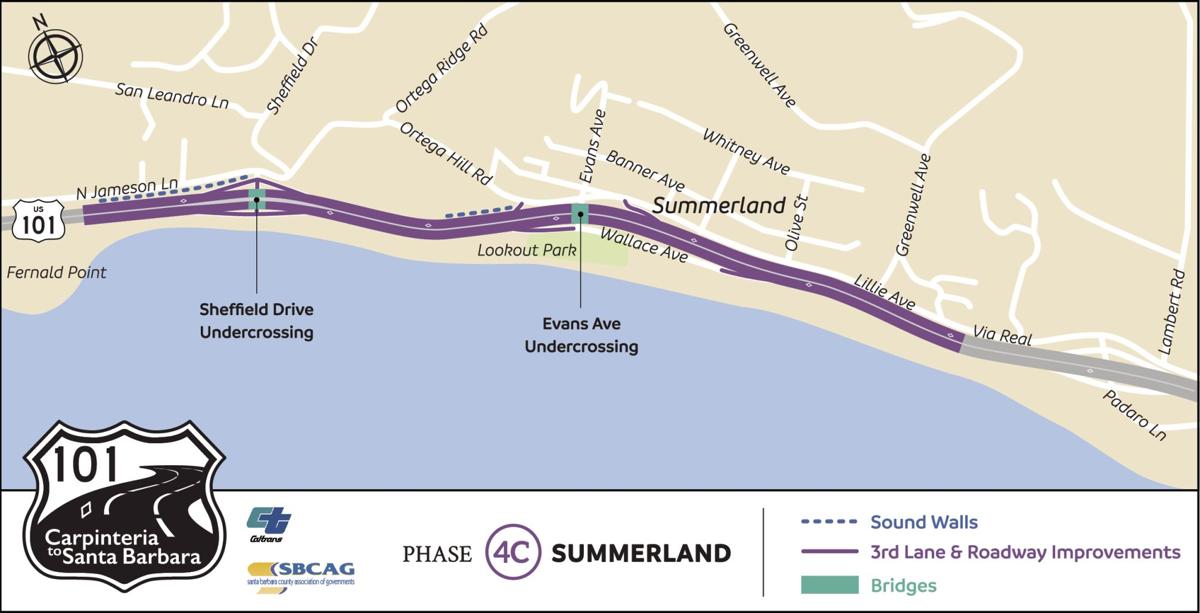 In the fourth phase of the Highway 101: Carpinteria to Santa Barbara project, construction will focus on the segment of freeway through Summerland including the Evans Avenue and Sheffield Drive undercrossings.

Landscaping is planned to highlight Summerland’s community character, as shown in this rendering of the future Sheffield Avenue intersection.

A rendering of the planned Evans Avenue overcrossing shows a safe crosswalk for pedestrians and a Class 1 bike lane.

In the fourth phase of the Highway 101: Carpinteria to Santa Barbara project, construction will focus on the segment of freeway through Summerland including the Evans Avenue and Sheffield Drive undercrossings.

Landscaping is planned to highlight Summerland’s community character, as shown in this rendering of the future Sheffield Avenue intersection.

After over a decade of planning and discussion with the Summerland community, the California Department of Transportation (Caltrans) and the Santa Barbara County Association of Governments (SBCAG) will break ground on Highway 101 improvements through the seaside village on Sunday evening, Nov. 1.

The Highway 101: Summerland project will add a third lane to Highway 101 north- and southbound through Summerland, Class 1 bike lanes, new bridges and undercrossings at Evans Avenue and Sheffield Drive, updated on- and off-ramps, and drainage improvements.

Summerland is the second of five segments under construction as part of the Highway 101: Carpinteria to Santa Barbara project that will add peak-period, carpool lanes between Carpinteria and Santa Barbara.

Second District County Supervisor and SBCAG Chair Gregg Hart noted that conversations with community members and meetings between SBCAG and the Summerland Association have been going on for more than 10 years, “and I think ultimately the package that is being constructed has a lot of benefits for the Summerland community.” Among the benefits Hart noted are improvements to the Evans Avenue and Highway 101 interchange that will give the 60-year old standard Caltrans architectural structure “a really needed refresh—creating a modern and landscaped underpass.”

The contemporary design will include bike lanes and pathways to better connect pedestrians and cyclists to the beach, along with better lighting. “It’s what the community of Summerland has asked for,” said Hart, “much better connections for pedestrians and bikers.” The Class 1 bike lanes being constructed will ultimately connect to bike lane improvements along Santa Claus Lane connecting Summerland to Carpinteria by bike.

But the larger project of improving infrastructure in Santa Barbara County goes back over two decades, said Hart, during which various community and government agencies have grappled with “fundamental disagreements on how to manage traffic in the Central Coast.”

“As early as the 90s, there were advocates for train service only and advocates for freeway widening only,” Hart added, “and through a collaborative process we decided on doing both. We’re investing in rail service and highway improvements. We’re creating a multimodal corridor, linking all communities from Santa Barbara to Carpinteria.”

The multimodal approach not only creates more rail service during peak hours and widens highways, but also creates more accessible pathways for walking and biking, all funded as one project. The state of California has paid for the majority of the Santa Barbara County Highway 101 projects through state gas taxes; and earlier this month, the California Transportation Commission allocated $89 million to the Summerland project, funded by Senate Bill 1 (SB1). The Highway 101: Summerland project construction and landscaping costs are approximately $113 million.

“We’ve received more than half a billion dollars to fund this project,” Hart said, referring to the five highway segments included in the project throughout the county. In addition to state funds earmarked for Santa Barbara County’s highway improvements, the county has contributed $150 million from Measure A revenue, a .5% sales tax approved by voters in 2008. Measure A is expected to generate over $1 billion in 30 years to be used for various county infrastructure projects.

This past summer, SBCAG and Caltrans applied for state funding for the two remaining segments in Montecito and Santa Barbara to complete construction in the corridor. The CTC will vote on SB1 funding awards in early December.

“The Highway 101: Summerland project includes locally-inspired design elements that will highlight the unique community of Summerland at the Evans Avenue Undercrossing,” said First District County Supervisor and SBCAG Director Das Williams. “In addition, there will be important drainage improvements and the much anticipated third lane in each direction throughout Summerland that will create peak-period carpool lanes to help address ongoing traffic congestion.”

The Highway 101: Summerland project adds safety improvements in an area that has not been updated since the freeway was originally built in the 1950s. By creating new right-hand on- and off-ramps at the Sheffield Drive Interchange, project developers expect declines in traffic congestion and accidents.

“This is an important safety improvement because currently southbound vehicles are traveling up over Ortega Hill and traffic is merging on and off the freeway with old, sub-standard left-hand ramps. Coupled with the added spectacular ocean views on this hill, merging into the fast lane causes regular traffic backups,” said Caltrans District 5 Director Tim Gubbins.

As early as Nov. 1, residents should expect to see initial safety fencing, vegetation removal, tree trimming, safety barriers to shift lanes, and work to build up outside shoulders. Then lanes will be shifted, and construction will focus on the median and fast lanes of Highway 101.

Construction through Summerland is estimated to take three years and then shift into the next segment which is the Sheffield interchange.