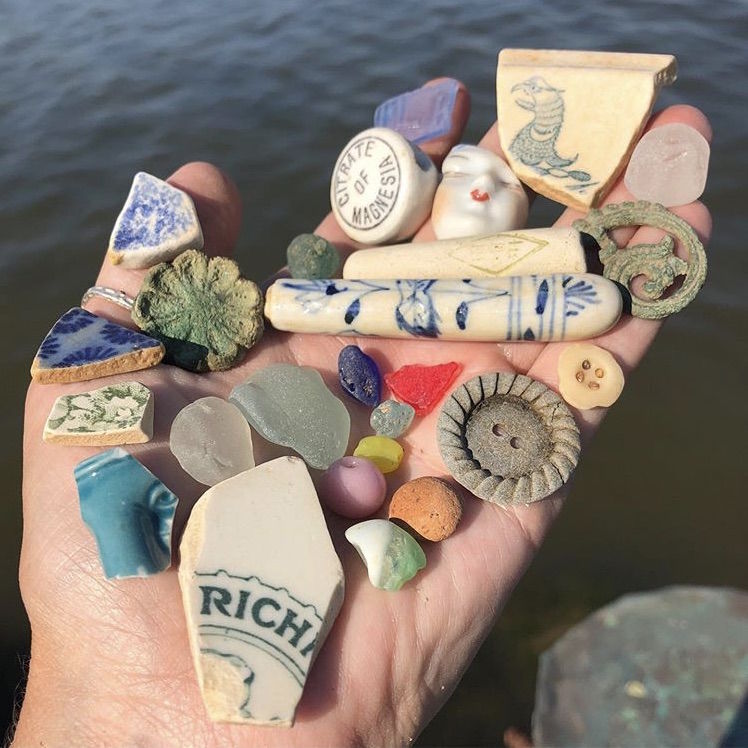 Every treasure from the sea tells a story. 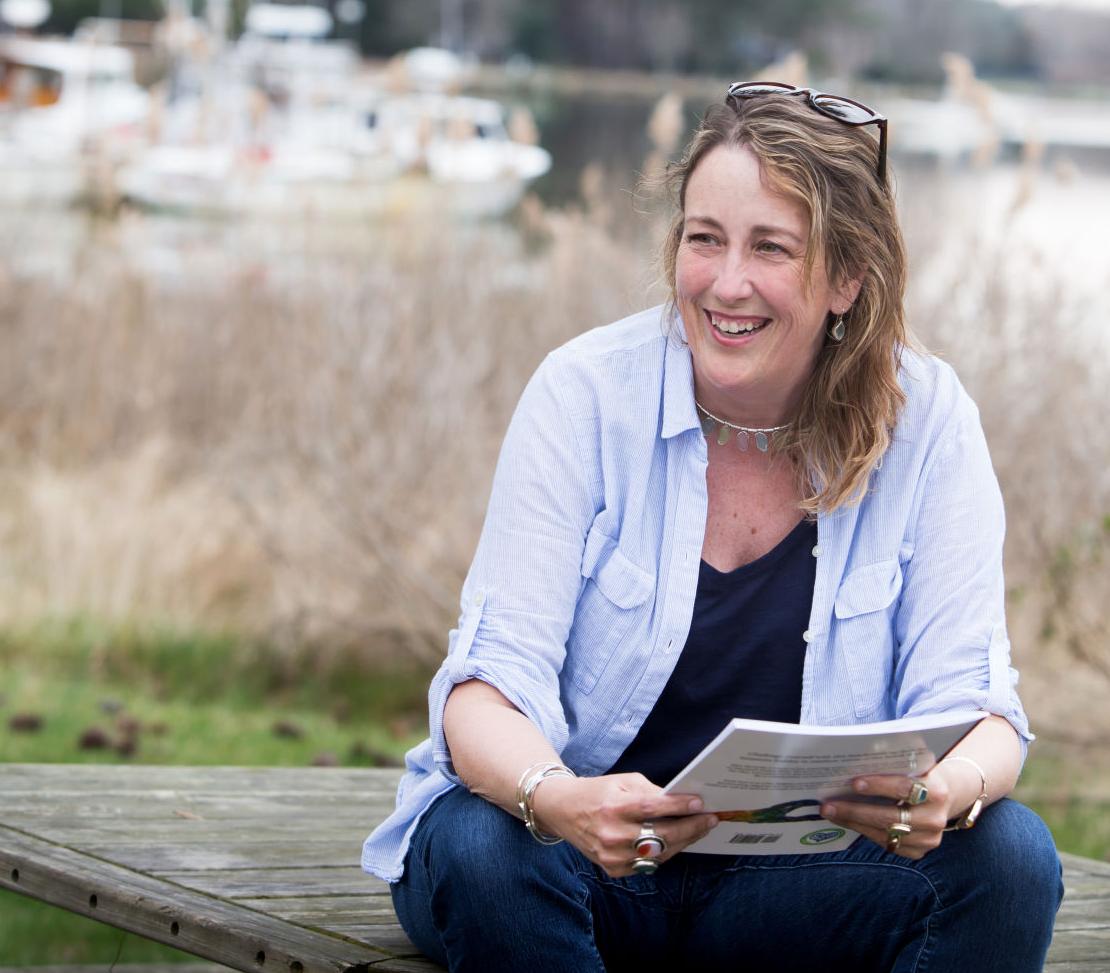 From her home on the Chesapeake Bay, Mary McCarthy will head west to spread her vast knowledge of sea glass with attendees of the fifth annual Santa Barbara Sea Glass & Ocean Arts Festival.

Every treasure from the sea tells a story.

From her home on the Chesapeake Bay, Mary McCarthy will head west to spread her vast knowledge of sea glass with attendees of the fifth annual Santa Barbara Sea Glass & Ocean Arts Festival.

The sea glass hunting obsession comes with its fair share of mystery. How old is this smoothed gem? Why do marbles wash up on the shore? Sea glass expert Mary McCarthy will bring her deep knowledge and her phenomenal collection of coastal treasures to the fifth annual Santa Barbara Sea Glass & Ocean Arts Festival on Sept. 14 and 15 to answer these questions and many more.

For McCarthy, beachcombing is both passion and profession. The Chesapeake Bay resident has logged thousands of hours scouring the tideline and researching her finds. She is also an author, reiki master and journalist. Her new children’s book with Kirsti Scott called “I SEA, A Beachcombing Treasure Hunt” benefits ocean conservation.

McCarthy is secretary on the Board of Directors of the North American Sea Glass Association, where she is also education chair, and is executive director of The Sea Glass Center educational nonprofit organization.

For the fourth consecutive year, McCarthy will travel across the country to be a featured speaker and judge at the sea glass festival. On Saturday, Sept. 14, at 10:30 a.m., she will present on sea glass festival winners from contests she has judged around the country. Then on Sunday, Sept. 15 at 11 a.m., she’ll present on how to determine how old sea glass is. Also, she is the head judge in the festival’s Treasure Contest, and she’ll be on hand both days to identify attendees’ personal sea glass and to offer “fill a jar for $10” at her beachcombing table.

Below, McCarthy answers a few questions from the world of seaside treasure hunting.

CVN: When you meet people who aren’t familiar with sea glass, how do you describe what it is and why it matters to you?

CVN: When and how did the beachcombing bug bite you?

McCARTHY: In 2001, my family moved to the Chesapeake Bay coastal region, and I took my kids to the beach. I found a perfectly frosted orange cateye marble. I wondered what it was doing on the beach, how it got there. I soon learned what sea glass was and found Richard LaMotte’s book “Pure Sea Glass.” Discovering that he lived nearby, I became a little obsessed with learning everything I could about sea glass, and he has been an incredible mentor.

McCARTHY: Finding the intaglio and learning later that it was a cut gemstone of Artemis, the goddess of the hunt, was really exciting. But in terms of a full-circle moment, I recently found a personalized metal token from 1940 that was made at a beach resort. I was able to locate and return it to an 81-year old area woman, so she could gift it to her great-granddaughter and keep it in her family.

CVN: Trash or treasure? When does the first become the second?

McCARTHY: I have a hashtag I use on Instagram, #trashbeforetreasure because I'm very involved in beach cleanups. As beachcombers we are in a great (literal) position to keep the coastline free of debris on behalf of sea life. In terms of what treasure is, that's in the eye of the beholder. We all treasure things differently, and no one can or should make that determination for someone else.

CVN: Green, white and brown sea glass are most common. Why?

McCARTHY: Because those are the most common and least expensive colors in glass manufacture. Rare colors like red require additives (like gold!), so they are produced much less frequently.

CVN: Beachcombers find value in different items for different reasons, but generally what colors and shapes of sea glass are most highly prized and why?

McCARTHY: In terms of color, orange is most rare, red and turquoise and teal and lavender are all highly prized. I think it isn't as much shape as the level of finish on the glass that is prized. In general, the more wave-worn, the more valuable in the sea glass world.

CVN: How long does it take the ocean to smooth an edge of glass? Is there any way to date sea glass?

McCARTHY: The amount of time it takes for sea glass patina (generally referred to as "frost") to develop depends on the wave action in the particular body of water. California cliffs will finish a piece of glass in a few years versus gentle rolling waves where a river meets the ocean in another part of the world. Other factors affect the finish on the glass as well, like the pH level of the water. Glass finds can be dated by their color and certain identifying marks on their shape, lettering, thickness and other clues.

CVN: Santa Barbarians love the sea and its collectibles. How do the treasures on our shores differ from those found near your Chesapeake Bay home?

McCARTHY: Your glass is smaller and smoother because it's been beaten down by the ocean. Our glass is bigger because it's in a bay, but we have a higher likelihood (those of us who know where to look for it) of finding whole bottles, for example, or pieces with lettering, because the waves haven't smashed the pieces down.

McCARTHY: Sea glass becomes rarer every day for two main reasons: coastal erosion, and more people looking for it. Believe what you will about rising tides, but the beaches are disappearing, period. In the last 10 to 20 years, exponentially more people started hunting for sea glass. There is less of it because of the demand to find it. We should treasure what we have. A third reason is that we switched to using plastic instead of glass, though that seems to be changing.

McCARTHY: Santa Barbara Sea Glass & Ocean Arts Festival isn’t just a sea glass show, it’s a family. This team comes together throughout the year to bring these incredibly talented artisans together and create the best experience possible for the great folks who visit the showgrounds, and they do it with smiles on their faces the entire time.

The Santa Barbara Sea Glass & Ocean Arts Festival will be held Sept. 14 and 15 at the Earl Warren Showgrounds, 3400 Calle Real, Santa Barbara. Tickets are $5 for Sunday admission, $7 for Saturday admission, $10 for a two-day pass, and $15 for Saturday Early Bird admission (9 to 10 a.m. on Saturday). For more information, ticket purchases and workshop registration, visit santabarbaraseaglassandoceanartsfestival.com.