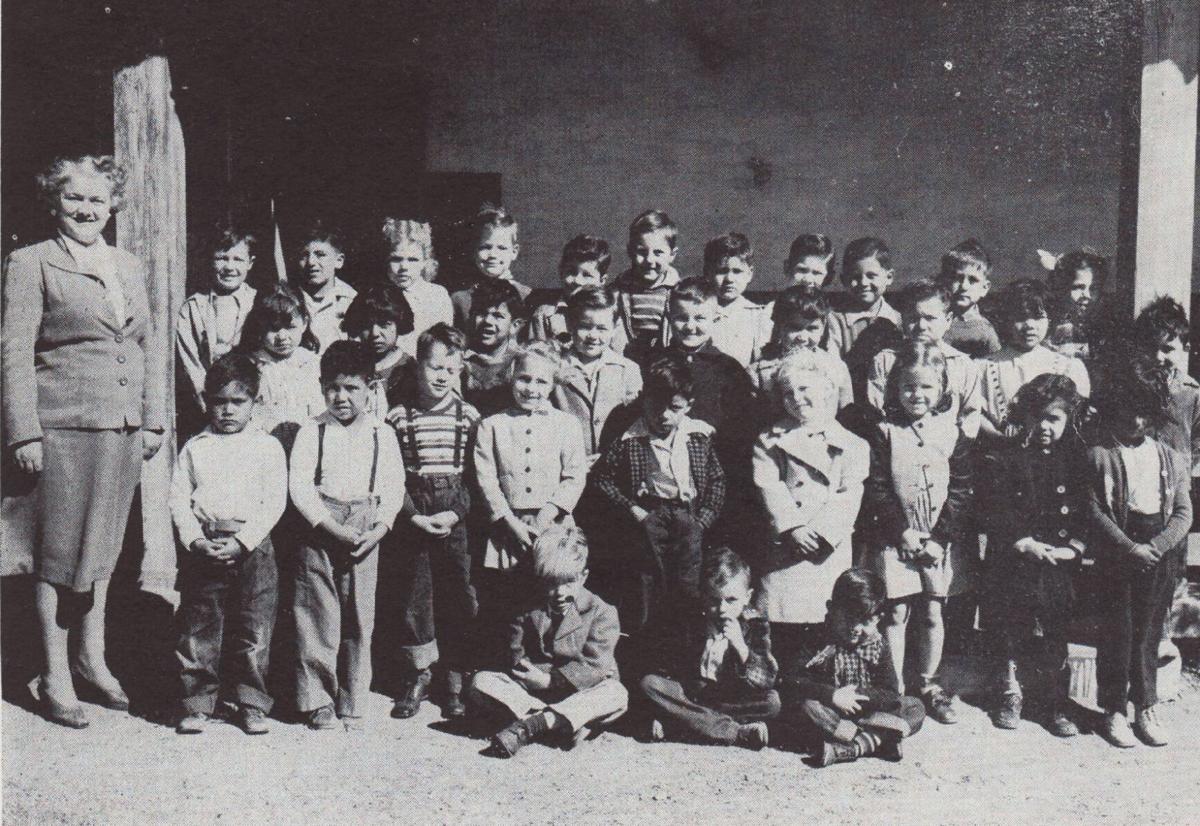 Teacher Rebecca Lee and the integrated kindergarten class of 1947-48 at Main School. Dr. Joe Gonzalez stated that the kindergartners of 1947-48 developed into a giant family.

Teacher Rebecca Lee and the integrated kindergarten class of 1947-48 at Main School. Dr. Joe Gonzalez stated that the kindergartners of 1947-48 developed into a giant family.

Schools in California were integrated by law starting in the fall of 1947. The court ruling in Mendes vs. Westminster of Orange County on April 14, 1947, declared that children in “Mexican Schools” were being denied access to social equality which was unconstitutional and unlawful.

Carpinteria schools had actually begun the process of integration a year earlier by semi-integrating the 1946 kindergarten class at Carpinteria’s Mexican school, Aliso. One such “white” participant remembers school superintendent and principal of both Aliso and Main elementary schools, Frank Wykoff, persuading his father to have him attend Aliso. The student cited here was John Rodriguez, Jr., a freckled, fair-complexioned lad of Hispanic descent, one of the children of the Californios who helped settle Carpinteria in its earliest years. A close look at Aliso’s kindergarten class of ’46-47 shows a number of children like Rodriguez, tow-headed Latinos sprinkled into the mix. Perhaps Wykoff had to get the look of integration established before its actualization.

The following year, 1947-48, all classes and schools in Carpinteria were integrated. Kindergarten classes were at Main School, along with the fifth through eighth grades. All first through fourth grades were assigned to Aliso School. Aliso had a cafeteria added to its campus to match the one at Main to accommodate the change. Carpinterian Marty Panizzon remembers shifting over to Aliso from Main for his fourth grade school year. He says, “I was scared. There were some ‘pachucos’ there, bullies. Games on the playground, sometimes, were rough. But, I ended up making many friends at Aliso, for life.”

Kindergarten teacher, Rebecca Lee, coming over from Aliso to Main had this to say, “We have been moved over to the big school, which has been a joy to all of us. We have so much more room, and the school ground apparatus to play on.” Today, it’s hard to think of Main as the “big” school!  The reason given for its closure at the end of the 2007 school year by the Carpinteria School Board was that it was too small in comparison to the Aliso and Canalino elementary schools. Its students could easily be absorbed by them.  Today the Carpinteria Children’s Project has taken its place on 8th Street.

The 1947-48 schoolyear of integration in Carpinteria was considered a grand success. Lorenzo Del Armi was an eighth-grade teacher that year at Main. He recalled it as one of the most rewarding learning experiences of his professional career. Dr. Del Armi would go on to become the president/superintendent of Santa Barbara City College, then superintendent of Santa Barbara County Schools.  Superintendent and Principal Wykoff wrote in the 1948 “La Revista” yearbook for Aliso and Main students, as follows, “If nations could only exhibit the same ability to better understand and appreciate the principles and ideals of others that you have demonstrated, especially in this last year, they would be well on the way to achieve world peace.”

The first integrated kindergarten classrooms of 1947-48 saw 43 of its students attend Carpinteria schools through 12th grade, says Joe Gonzalez, Class of 1960. “We were a giant family, with some rather gifted individuals in the racial mix.”  A number of the Mexican-American children made notable social class jumps. This included Dr. Gonzalez himself, a university professor and Fulbright Scholar; Dan Rodriguez, Lt. Colonel in the U. S. Marine Corps; Tomás Castelo, Santa Barbara Attorney-at-Law; and Leo Martinez, Santa Barbara City Councilman (1973-77), who in 2015 helped secure city council district elections in Santa Barbara. Thinking back on the rationale for the 1947 Westminster court case decision, one might ask, was their achievement happenstance, or the logical conclusion of integregated classes and schools?