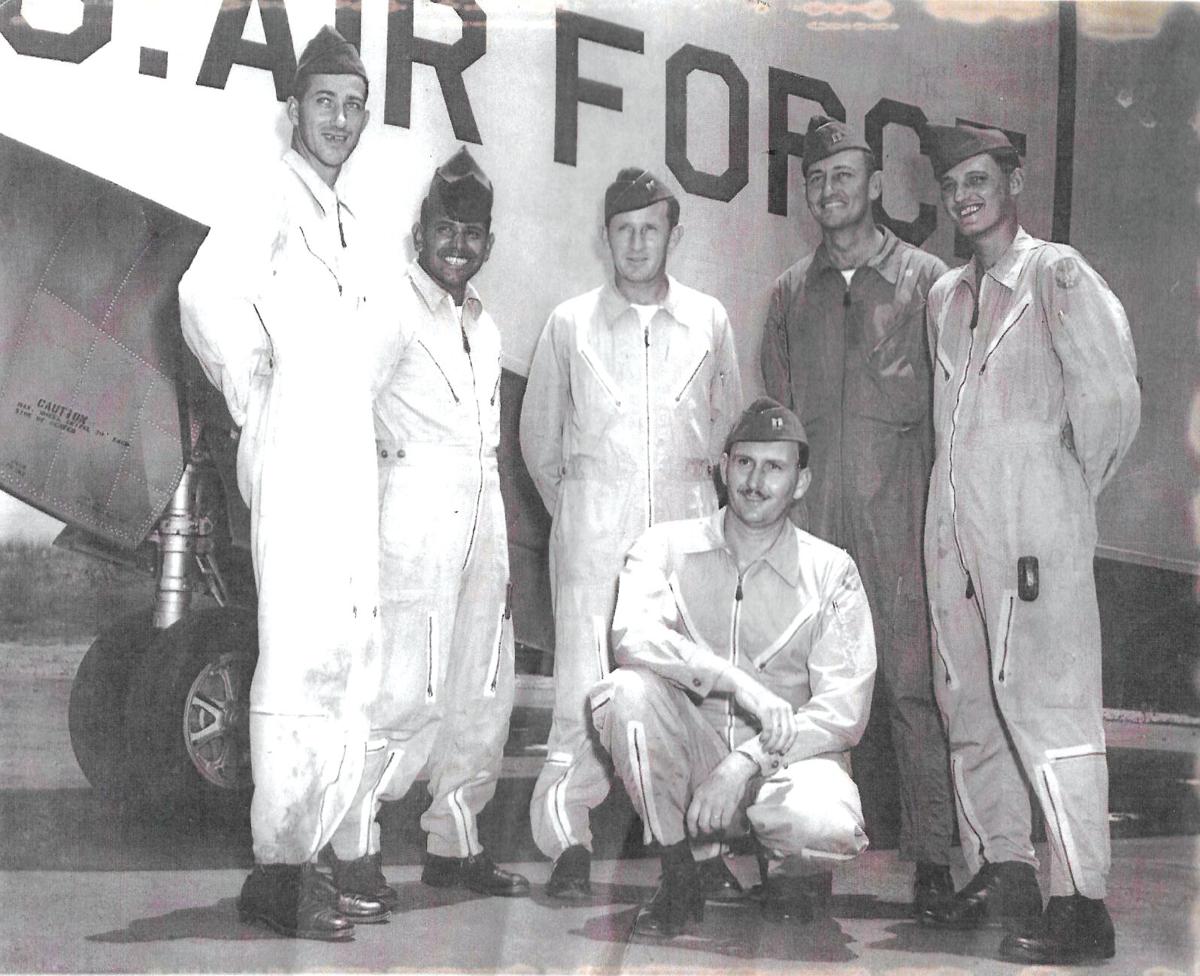 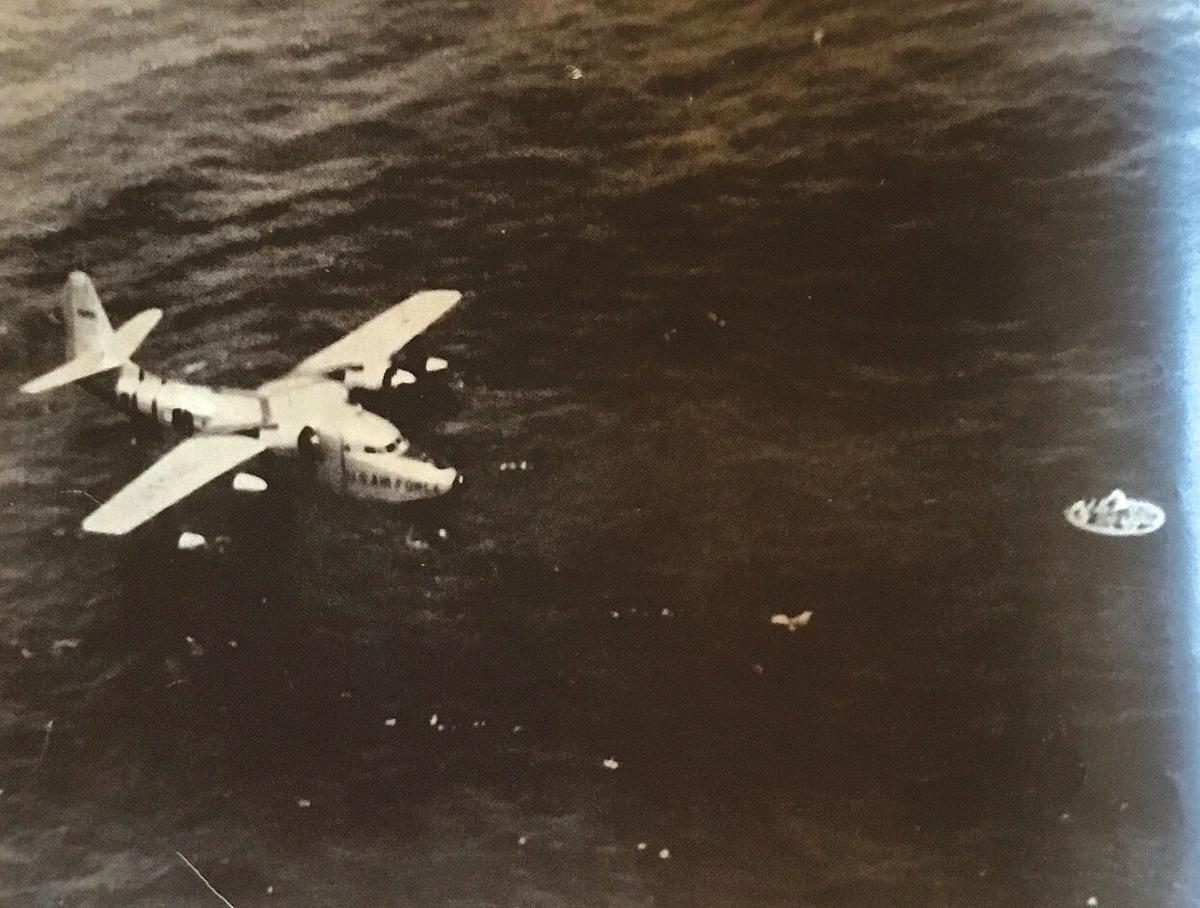 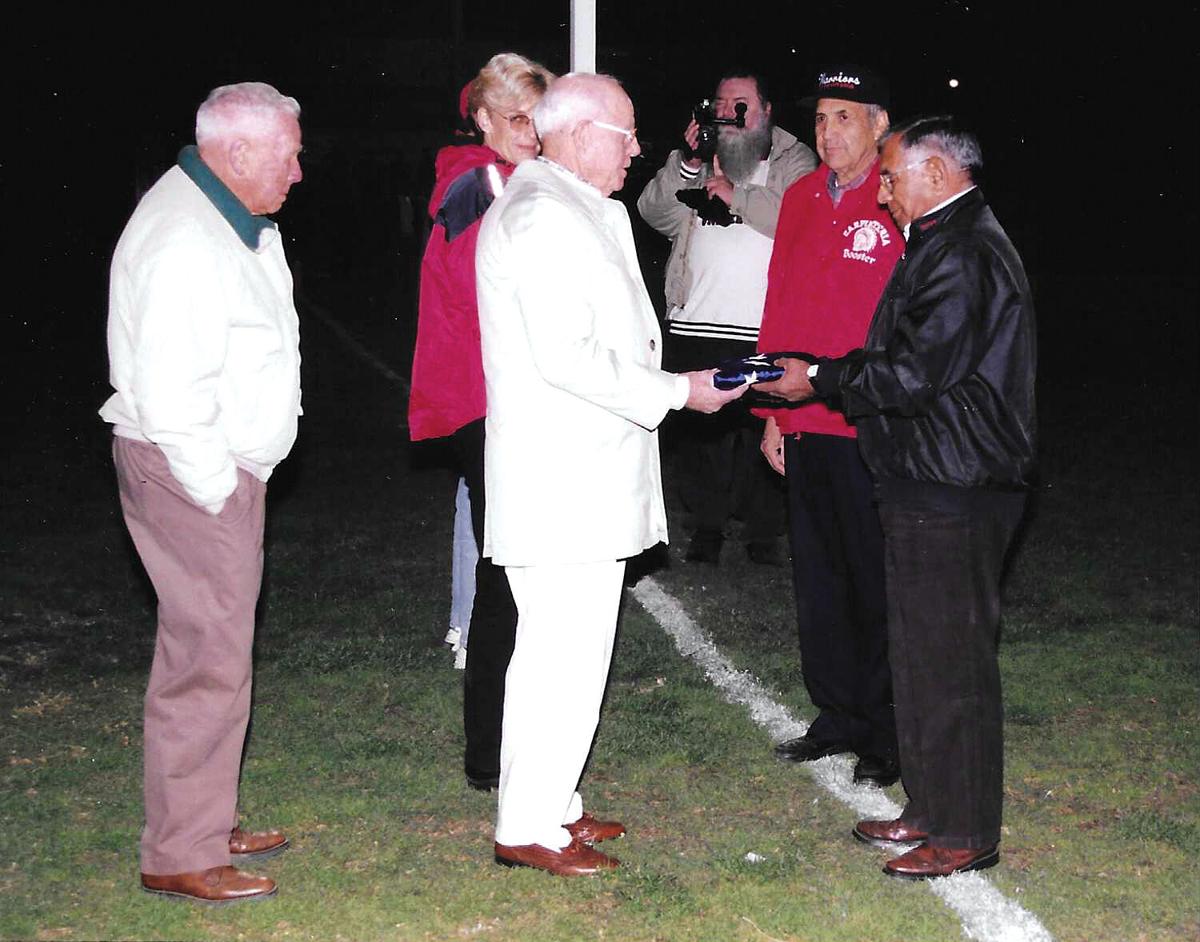 Warriors co-captains Larry Rodriguez and Joe Macias were members of the 1949 football team that played the first football game at the newly renovated Memorial Field (then located at the high school and now the site of Carpinteria Middle School) on Nov. 4, 1949. Both would be part of the closing ceremonies 50 years later on Nov. 6, 1998. At the closing ceremony are, from left, alumni representative Irving “Tud” Treloar; Carolyn Frary and Rollie McIntyre representing committee and worker volunteers; and 1949 football team co-captains Joe Macias and Larry Rodriguez.

Warriors co-captains Larry Rodriguez and Joe Macias were members of the 1949 football team that played the first football game at the newly renovated Memorial Field (then located at the high school and now the site of Carpinteria Middle School) on Nov. 4, 1949. Both would be part of the closing ceremonies 50 years later on Nov. 6, 1998. At the closing ceremony are, from left, alumni representative Irving “Tud” Treloar; Carolyn Frary and Rollie McIntyre representing committee and worker volunteers; and 1949 football team co-captains Joe Macias and Larry Rodriguez.

A favorite quote of mine about “warriors” is credited to Heraclitus, a Greek philosopher circa 500 B.C. “Out of every one hundred men, 10 shouldn’t even be there, 80 are just targets, nine are the real fighters, and we are lucky to have them, for they make the battle. Ah, but the one, one is a warrior, and he will bring the others back.”

Many Carpinteria Warriors student-athletes have not only performed well on the fields and courts of our local high school but have gone on to excel in the world through unique experiences that bring credit to themselves and their school, family and community.

Many students are recognized early on in high school for their leadership and character by their teammates who elect them as captains of their respective teams. One such student-athlete is Lawrence (Larry) Rodriguez, member of the Warrior football teams of 1948, 1949 (captain along with Joe Macias) and 1950 (captain). He also played varsity baseball for three years and played three years with the Carpinteria Merchants baseball team.

Larry, the son of Tony and Ramona Rodriguez, grew up in Carpinteria along with his brothers, Tony and Raymond (Tiny). After graduating high school with the class of 1951, Larry, in early 1952, enlisted into the U. S. Air Force. On July 23, 1954, a British Cathay Pacific Airways C-54 Skymaster airliner carrying 13 passengers and six crew was shot down off the coast of Hainan Island in the South China Sea by two fighters of the People’s Republic of China. Ten died in the crash. The 31st Air Rescue Squadron flying out of Clark Air Force Base was dispatched to rescue any survivors.

A/3c Larry Rodriguez was a member of the six-man crew of the Grumman Albatross SA-16 amphibian plane piloted by Captain Jack Woodyard that made a daring landing in rough seas to rescue nine survivors, one of which was six-year-old Valerie Parish of Iowa Park, Texas. The San Francisco Examiner quoted a then 20-year-old Rodriguez as he said, “It was worth my whole career to pull that little girl out.” Just 10 minutes outside of landing at Kai Tak airport in Hong Kong, one of the survivors died.

The Oct. 23, 1954 Saturday Evening Post published this note on the incident: “The Chinese communists themselves admitted, in apologizing to the British for shooting down the plane, they thought it was a Chinese Nationalist aircraft.” The political fallout resulted in the People’s Republic of China not being seated in the United Nations.

The tragic incident was written up in not only Look Magazine, the Saturday Evening Post, and the Examiner, but in national magazines and major newspaper across the country.

Rodriguez’s name was cited in many of the articles and, of course, Carpinteria was spelled “Carpenteria.”

Considered one of the outstanding sea rescues in U.S. Air Force history, Captain Woodyard was awarded the Distinguished Flying Cross for his efforts in the dramatic rescue. He was also quoted in the aviation magazine Historic Wings.

Rodriguez and the crew were awarded Airman’s Medals for their heroic efforts in rescuing the survivors and providing emergency medical care.

Following his discharge in 1956, Rodriguez enrolled at Ventura Junior College, playing one year of baseball. He then transferred to UCSB, graduating in 1961. After securing a teaching credential, Rodriguez began a 30-year career at Santa Barbara Junior High School teaching Spanish, Physical Education and Math.

Rodriguez coached football at Villanova Prep in Ojai with Elmo Ferrari. He also officiated football, basketball and baseball with the Channel Coast Officials Association from 1958 to 1980.

Retiring from education in 1991, he continued to drive a bus, as he started in 1969 with the Melini Bus Service. Now in his 80s, he continues this hobby and career by driving for Valle Verde Retirement Center.

Larry Rodriguez is a Warrior who definitely brings others back!