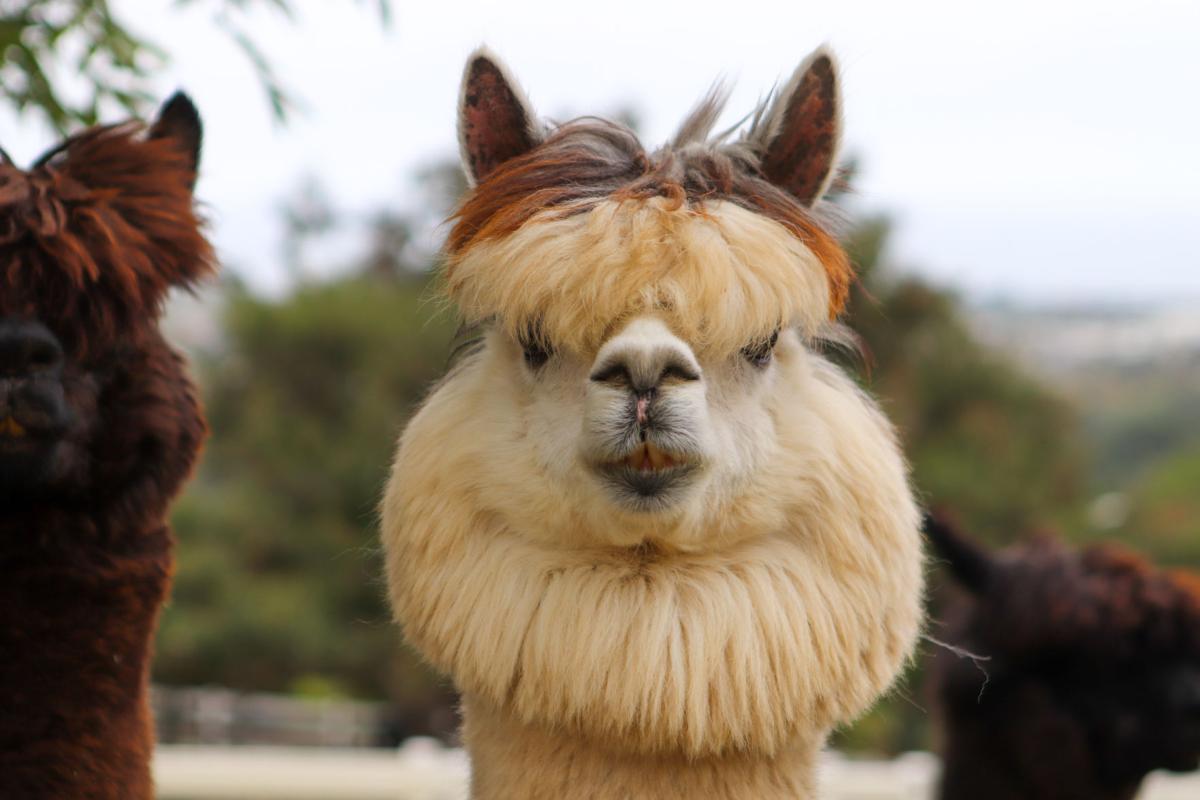 At one point the Lonson family had 300 alpacas on their Carpinteria farm. Today their herd is a cozy 50 alpacas. 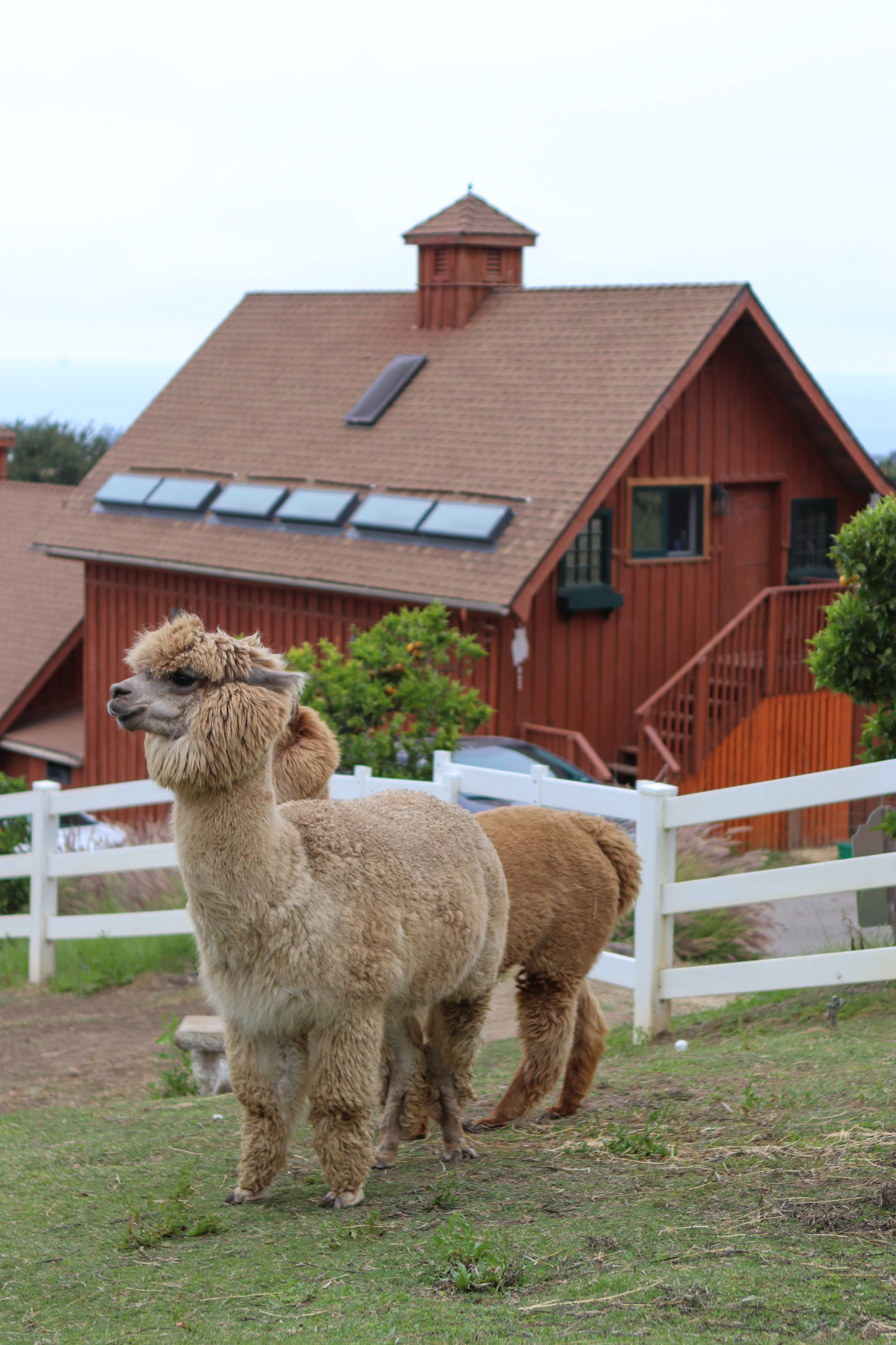 Alpacas are herd animals and need to be kept in pairs or more. 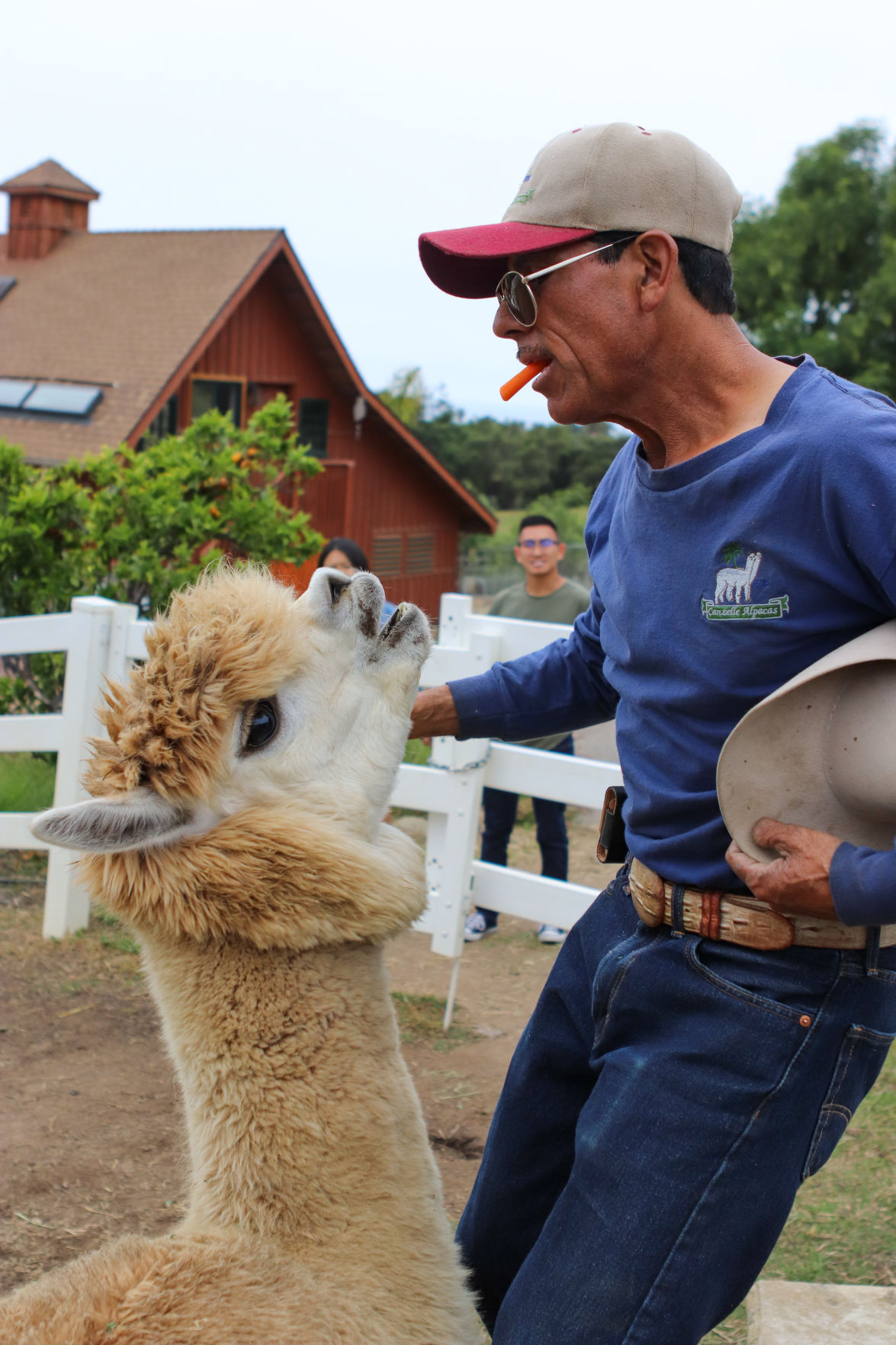 Ranch manager and “alpaca whisperer” Humberto Razo feeds a carrot from his mouth to one of the Canzelle llamas. 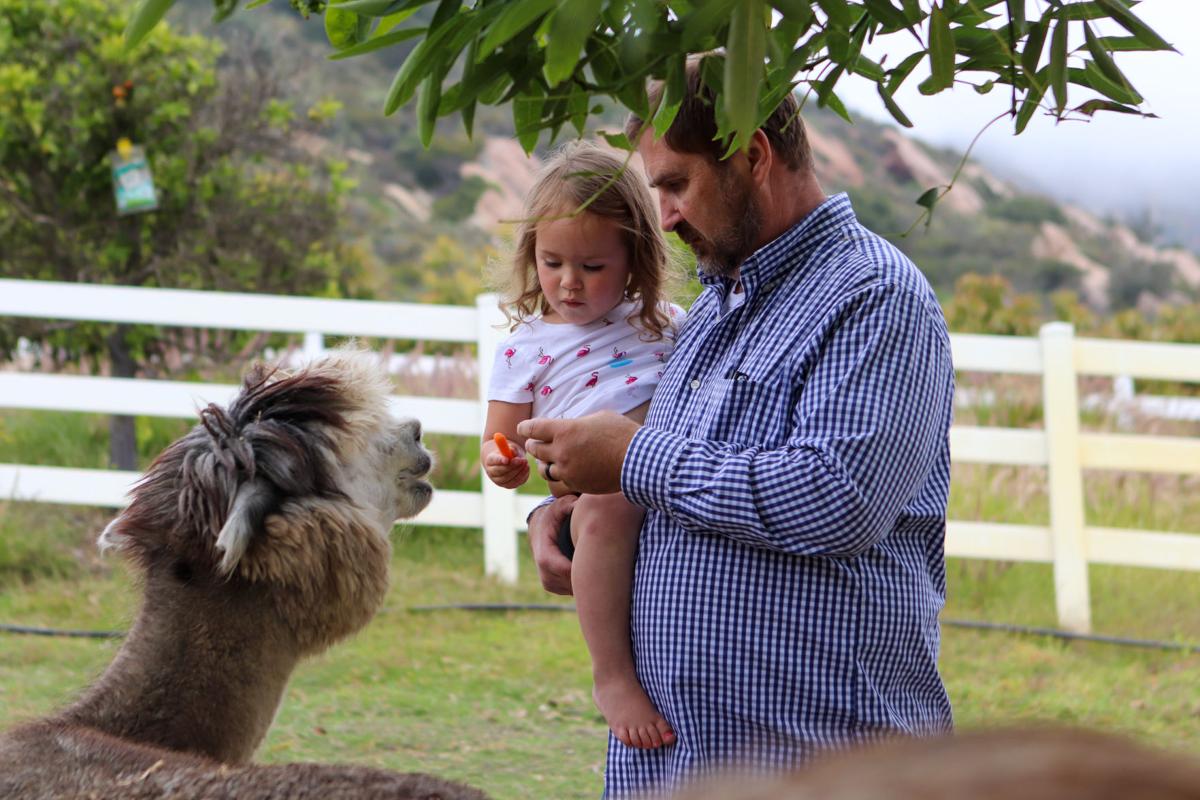 Thomas Currier and his granddaughter Fallyn Nay feed carrots to a female llama at Canzelle Alpacas.

At one point the Lonson family had 300 alpacas on their Carpinteria farm. Today their herd is a cozy 50 alpacas.

Alpacas are herd animals and need to be kept in pairs or more.

Ranch manager and “alpaca whisperer” Humberto Razo feeds a carrot from his mouth to one of the Canzelle llamas.

Thomas Currier and his granddaughter Fallyn Nay feed carrots to a female llama at Canzelle Alpacas.

What animal grows possibly the world’s softest fiber, comes in a variety of colors, is an efficient lawn mower, has adorable babies that walk shortly after birth, and spits at you if you misbehave? This animal is, of course, not the lucky llama nor the enduring camel, but a close relative—the alpaca. For those unfamiliar with what great pets alpacas can be, it might be time for a visit to Canzelle Alpacas at Lonson Family Farm located in the foothills above Carpinteria.

Carol-Anne Lonson, a teacher, and her mother, Hazel Lyon, both of whom migrated here from South Africa and ended up in Hope Ranch, were looking for a home-based business that had some tax benefits. In 1998, after reading a magazine advertisement about a ranch in Santa Ynez that raised alpacas, the mother-daughter team headed north where they met Joan Spiers, the owner of El Ranchita and a highly-respected expert on alpacas. Carol-Anne immediately fell in love with these critters and purchased her first two females, bringing them home to her two-acre farm in Hope Ranch. These two charmers led Carol-Anne to a new adventure: breeding and selling award-winning alpacas.

By 2004, the Canzelle Alpacas team owned 150 animals. Because of their small hooves and their ability to nibble grass rather than pull it out by the roots, alpacas are easy on the land, but it was time for the Lonsons to move their herd to a bigger facility. Thus, Canzelle Alpacas traveled to Carpinteria and made their home on 20 acres, now known as the Lonson Family Farm. Within two years, the number of animals grew to 300, and the business revolved around breeding, boarding and selling alpacas to responsible owners. Alpacas are herd animals and don’t do well alone, so they are always sold in pairs: two females, a female and a crie (a juvenile alpaca), or a female and a gelding. Breeding males fetch the highest prices and usually need their own pen. One of the many “fun” sides of this business is the active show circuit where champion alpacas compete. Of course, the more awards won, the greater value the animal is to the breeder.

The year 2008 brought the fall of the stock market and a dramatic decline in the demand for alpacas. Many who had been boarding their alpacas on the Lonson farm were forced by circumstances to abandon their animals, and Carol-Anne was compelled to change her business model. She went through a period of qualifying new owners who wanted to adopt a few alpacas for their backyard or have a breeding pair and experience the cycle of life. Eventually, the number of alpacas on the farm was reduced to around 50.

Prospective buyers were given a tour of the Lonson farm where they saw alpacas of various colors and temperament and quality—some people seeking the animals as pets, and other for breeding or showing. One couple just wanted to see the animals and they had such a good experience that their social media and website posts made Canzelle Alpacas tours a must-see attraction. Carol-Anne realized people were delighted to be able to interact, hug, feed and enjoy these delightful animals in a beautiful setting for a fee. Now, people from all over the world travel to Carpinteria for their Canzelle Alpacas tour. So, a bit by accident, a little agri-tourism venture began on the Lonson Farm. At first Carol-Anne (who is admittedly “old school”) tried keeping track of things with pen and paper, but soon enlisted the help of her youngest son, Brad, to design a website and schedule all tours online.

A secure 6-foot chain link fence, lighting, Anatolian shepherd guard dogs, llamas and one water buffalo provide protection from backcountry predators like bobcats, mountain lions and coyotes. The alpacas are also cared for by Humberto Razo, the ranch manager of 25 years and the ultimate “alpaca whisperer.” It’s common to see the alpacas happily eating carrots out of Razo’s mouth, playing tag and even giving him a hug. Archie, the 1,200-pound rescued water buffalo, will peacefully lie down for a hug and a good belly scratch from Razo, not something easily accomplished.

Alpacas originally came from Peru, Bolivia and Chile. While llamas are used as pack animals, alpacas are raised for their “royal” fiber (in Inca culture it was reserved for royalty) that is similar to cashmere. Alpacas get vaccinated, have their teeth cleaned, get their toenails trimmed and are sheared on the same day, once a year. Their life span is 20 to 25 years and their main diet is grass, but the Lonson Farm alpacas also enjoy top-grade alfalfa twice a day. Alpaca “gold” (manure) is a quality fertilizer and can be applied to any plant without composting first. November is the month to see the adorable baby alpacas, and tour reservations may be made at Canzelle.com.