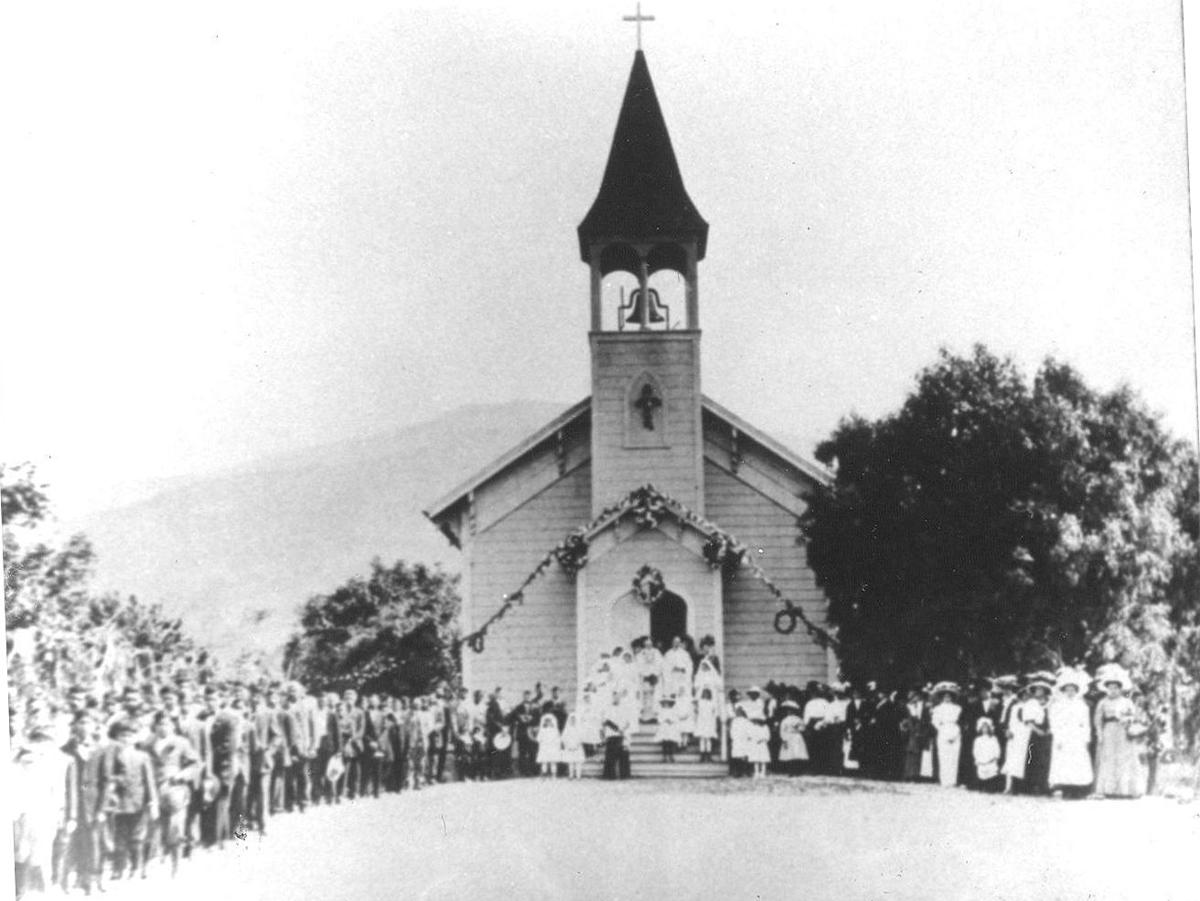 A Communion celebration and the blessing of the new church bell at Iglesia San Jose, ca. 1920. 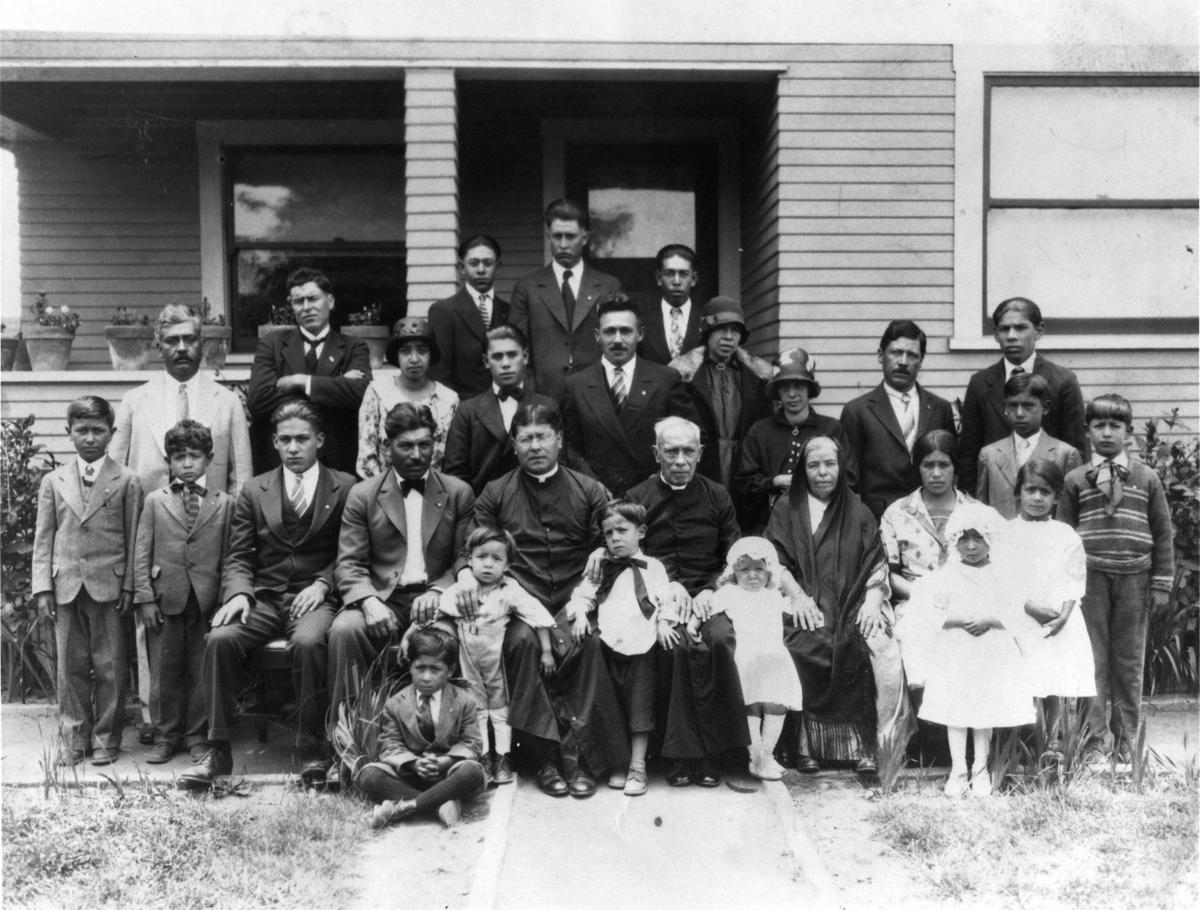 The Raya, Molina and Saragosa families gather around Padre Francisco Escobar, left, and El Cura Elizondo, right, after a church service on 7th Street at the home of one of these families.

A Communion celebration and the blessing of the new church bell at Iglesia San Jose, ca. 1920.

The Raya, Molina and Saragosa families gather around Padre Francisco Escobar, left, and El Cura Elizondo, right, after a church service on 7th Street at the home of one of these families.

The first Catholic Church in Carpinteria was established in 1894. It was named “La Iglesia San Jose” and was a used building purchase. It had been built in 1872 by the Methodists on Upson Road, a road that still exists today, but looks more like a long driveway off the west side of Santa Monica Road as one drives towards Foothill Road.

The Methodists sold the church to the Catholics who had no church structure of their own. The Methodists relocated to the corner of 8th Street and Maple Avenue with a used purchase of their own, buying and moving, piece by piece, one of the Santa Barbara Methodist churches that was relatively new, but had become expendible. Presumably, the Carpinteria Methodists removed the church bell and tower off the structure on Upson Road, because the Catholics were left with a church without a bell, something considered indispensible to the parishioners.

Most of the Carpinteria Catholics were Spanish-speaking Californios, that is, Europeans originating from Spain whose predessessors had settled here. They were mostly the descendents of early Spanish expedition explorers, having Santa Barbara Presidio surnames like Rodriguez, Lobero and Hernandez. Mary Lopez, who attended the church, is quoted by Jayne Cravens Caldwell in “Carpinteria As It Was” as follows, “…there weren’t too many Catholics. Most of the people in Carpinteria in those early days were Protestants.” Indeed, there were churches in Carpinteria for Methodists, Episcopals, Baptists and Presbyterians.

La Iglesia San Jose did not have a bell to ring in services for at least a couple of decades. Eventually, the Catholics raised enough money to add a belfry. Caldwell quotes Mary Raya Molina, “Our little church had no bell, so they bought the bell and that day they put it on the table with a big roll of golden yellow ribbon that was about five inches wide. It had little bells painted on the ribbon. So that when they blessed that big bell, they sold little pieces of ribbon for 50 cents. They would just cut little pieces with scissors. And, then they put the bell up.”

In its history, La Iglesia San Jose never had a parish rector. Rotating priests from Mt. Carmel in Montecito visited monthly to conduct services. When the picture of the priest that accompanies this article was shown to Carpinteria native Josie Manriquez Villegas this year, just before her 100th birthday, her eyes grew wide, “That’s Father Escobar! I’ll never forget his face. He terrified me!”

In 1929, the Catholic congregation abandoned the church on Upson Road after 35 years of service. Instead, they used a hall for church services on 7th Street, near the homes of the Raya, Molina and Saragosa families. The church on Upson had become too old and small for the growing Catholic population. By 1934, the parishioners were ready for a new church. Trinidad Raya made a trade of his 7th Street and Ash Avenue corner lot in exchange for the Upson property where La Iglesia San Jose stood. He also donated an adjacent lot so that the new church would have room to expand.

The new church, now using its English name, St. Joseph’s Church, was built from the floor and framing of a tin shed from a Palm Avenue packinghouse for walnuts, and various parts that were saved from La Iglesia San Jose.