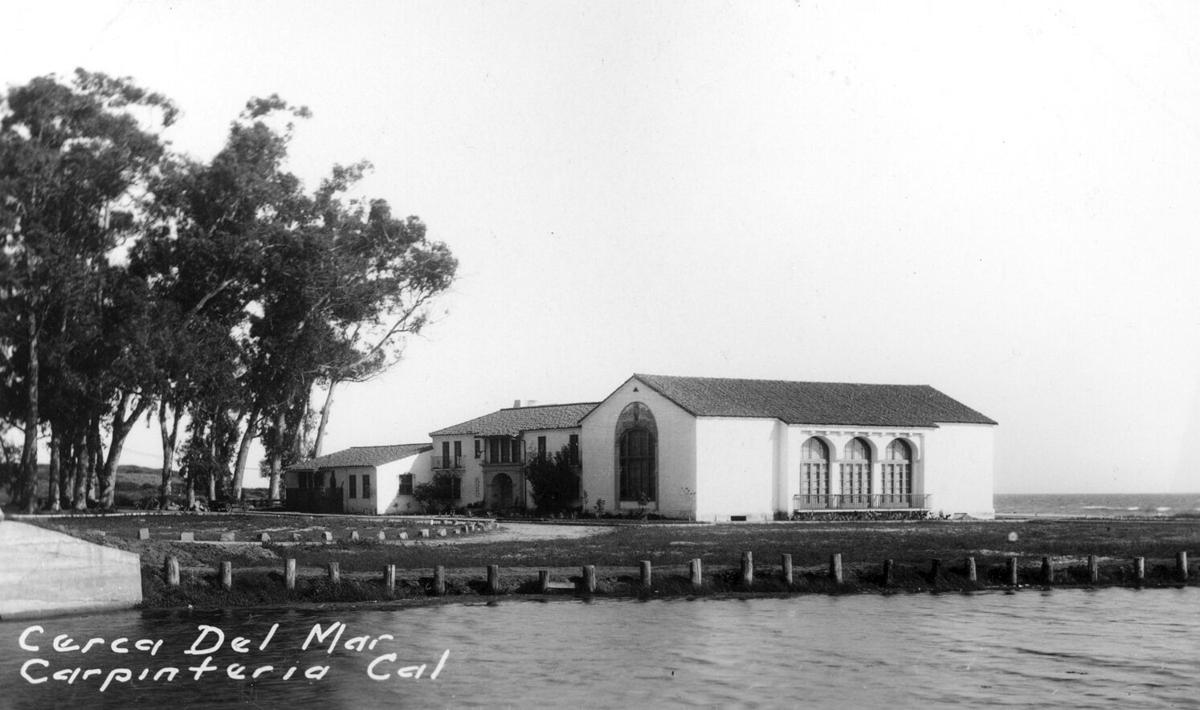 Sitting pretty above the high tide mark, Cerca del Mar, pictured here in 1936, was located at the mouth of Carpinteria Creek, an area that is occupied today by Carpinteria State Beach campsites. 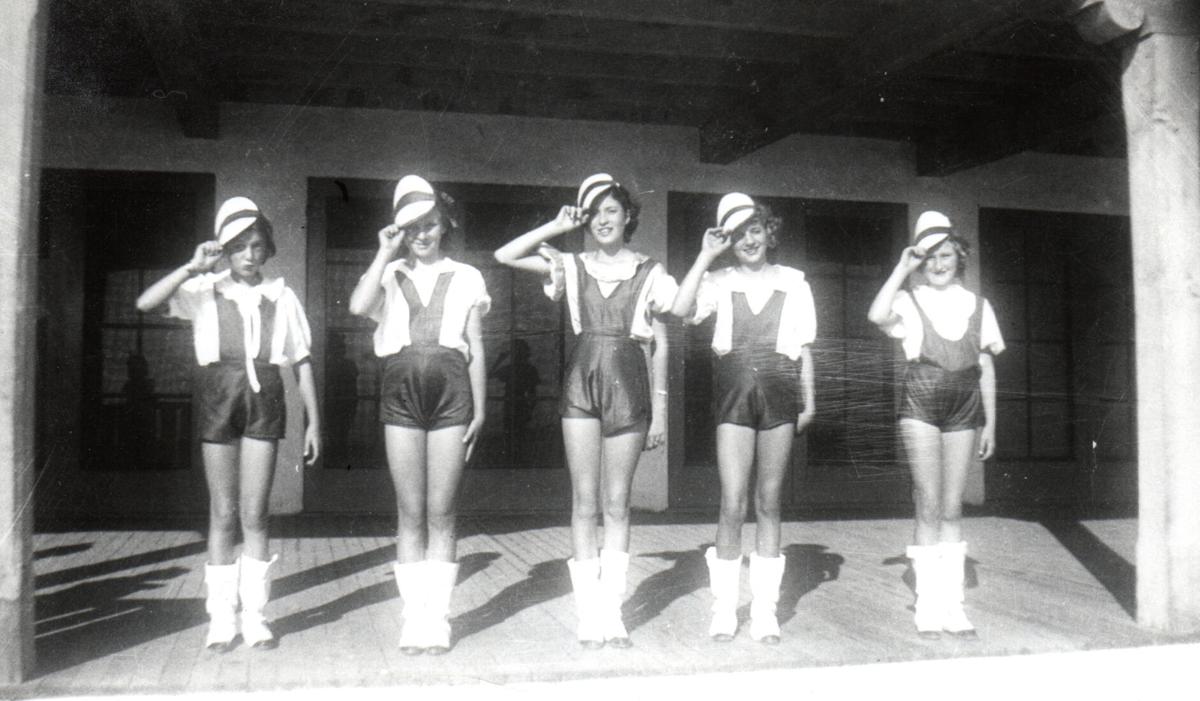 All dolled up for a dance performance at Cerca del Mar in the 1930s are, from left, Virginia (Bauhaus) Roddie, Mary Alice (Hebel) Coffman, Thelma (Bauhaus) Gilliland, June Osterman and Bonnie (Shepard) Milne. 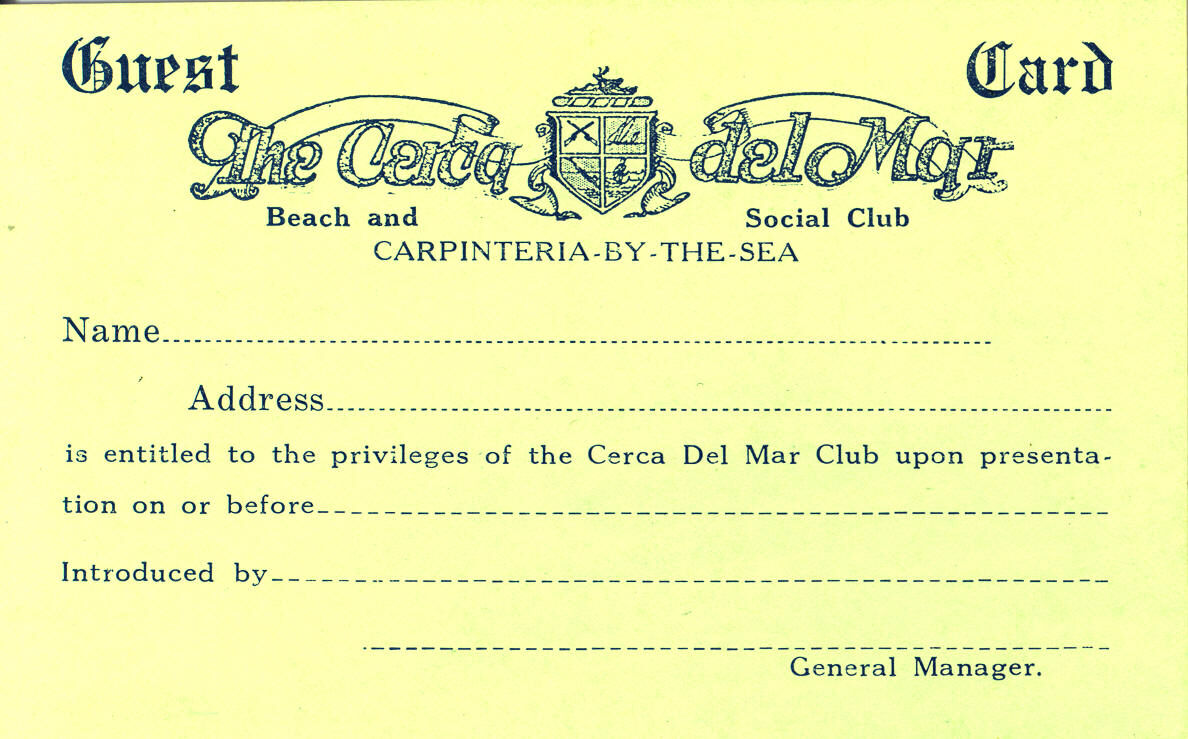 Sitting pretty above the high tide mark, Cerca del Mar, pictured here in 1936, was located at the mouth of Carpinteria Creek, an area that is occupied today by Carpinteria State Beach campsites.

All dolled up for a dance performance at Cerca del Mar in the 1930s are, from left, Virginia (Bauhaus) Roddie, Mary Alice (Hebel) Coffman, Thelma (Bauhaus) Gilliland, June Osterman and Bonnie (Shepard) Milne.

Editor’s note: This nugget of Carpinteria history was written by Lea Boyd and originally published in the Summer 2010 edition of Carpinteria Magazine.

To the east of the yawning mouth of Carpinteria Creek, a cluster of campsites hosts visitors from up and down the coast, people who pitch tents, roast marshmallows and relish the gritty sand between their toes. Little do these campers know that their temporary slice of beachside property once held an exclusive beach club called Cerca del Mar, the pride of a little beach town with cosmopolitan dreams. Hundreds of locals fixed their hopes on the Cerca del Mar in the late 1920s, but its brief blaze of glory turned to a flicker and eventually fizzled altogether.

In 1927, Carpinteria was modernizing and expanding while impressive crops of walnuts, lima beans and lemons drove its growing economy. The safe and welcoming beach had been discovered, and visitors parked along the dunes to camp for weeks or months of the summer.

Edward B. Coyle had arrived in town the year before, convincing locals that the seaside town needed an exclusive social club, a pleasure pier and cottages to house sea-seeking visitors from the stifling interior of the state. Construction of the great clubhouse began in 1927, and residents eagerly anticipated the opening of Cerca del Mar, a venue that the Carpinteria Herald reported “seems to be destined to become the live spot of this section of the two counties, Santa Barbara and Ventura.”

As if foreshadowing future complications, the first of many snags caught the project before construction was complete. Financial backing for the club fell through, and Coyle was left with building costs far beyond his means. Local residents, however, stepped in and invested in the project—one that seemed destined to succeed.

When the doors of Cerca del Mar Clubhouse swung open on Aug. 25, 1928, orchestra music poured out and hundreds of dinner guests poured in. Santa Barbara’s newspaper The Morning Press gushed over the opening. “In a colorful Spanish atmosphere and amid a festive carnival spirit, approximately 1,400 revelers attended the formal opening of Santa Barbara County’s newest beach club, the beautiful Cerca del Mar at Carpinteria, last night.”

“The new club, designed throughout in Spanish style, was the mecca for guests from all parts of the county, Ventura, Hollywood and Los Angeles,” continued The Morning Press. “While inside the dancers swayed to the melodious strains of the orchestra, others lolled in the cooling breezes of the ocean sweeping the wide veranda which extends along the full length of the clubhouse on the beach side.”

Under its red-tiled roof and behind ornate ironwork, the clubhouse held an 80- by 100-foot ballroom, a dining room that comfortably seated 150 guests, a kitchen and a large lounge. The second story housed offices and social rooms as well as the spacious veranda. Memberships were sold for $100 a family, and only paid members and their invited guests were eligible to enjoy the facilities at the exclusive club.

A short pier was built in front of the clubhouse, but longterm plans for the seven-acre Cerca del Mar property included an extension of the pier as well as construction of tennis courts, a swimming pool, a bathhouse and locker-rooms, 60 beach cottages, and a 100-room hotel. Fueled by the dazzling opening of the clubhouse, Carpinteria’s future as a beachside resort seemed certain.

The summer of 1928 became fall, and reports of Cerca del Mar continued to glow. Labor Day drew 2,000 visitors to the new clubhouse, where a bathing girl revue and an orchestra performance delighted the massive crowd. In the following months, The Morning Press regularly reported on Cerca del Mar luncheons, dinner parties, teas and bridge club meetings attended by the who’s who of Carpinteria families, such as the Catlins, Thurmonds, Bailards, Shepards and Treloars.

Then, on the morning of Dec. 26, Coyle, president of Cerca del Mar Club, was found dead in his bed, the victim of what was believed to be heart failure. With Coyle’s ambitions in the morgue, the certain success of Cerca del Mar began to fade.

Pick up next week’s Coastal View News to learn the fate of the Cerca del Mar.