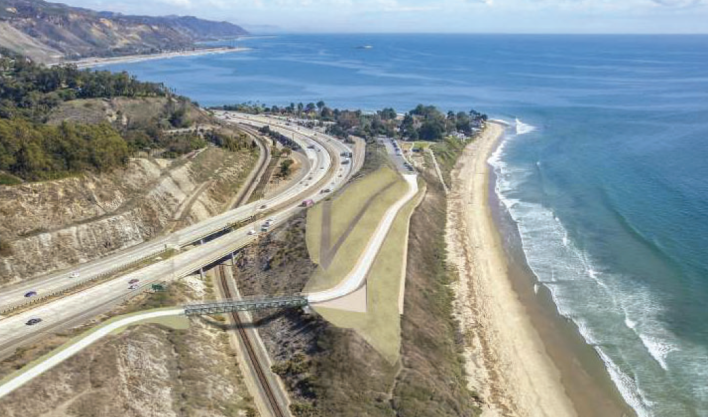 The soaring community’s launching site over Bates Beach would be impacted by the Rincon Trail. The reduction in airflow velocity for altitudes relevant to paragliding and hangliding will be reduced by 30%. 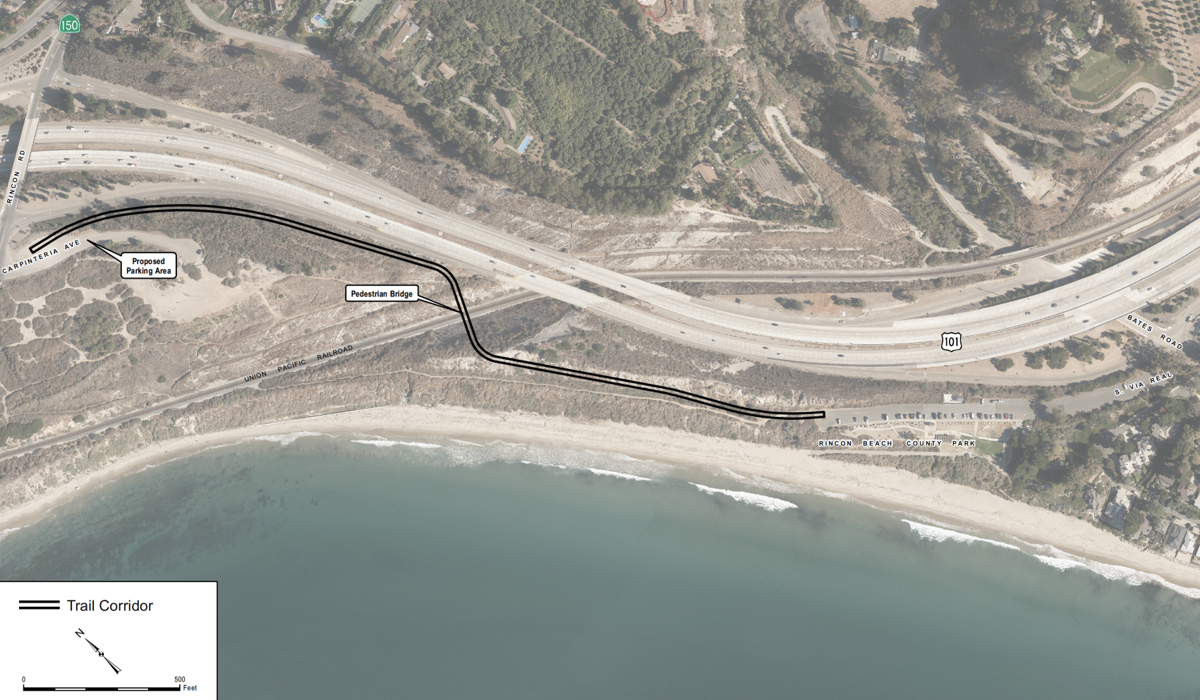 The proposed Rincon Trail would provide a dedicated connection from Carpinteria Avenue to Rincon Beach along the existing benched slope adjacent to U.S. Highway 101, including a pedestrian bridge over the train tracks.

The soaring community’s launching site over Bates Beach would be impacted by the Rincon Trail. The reduction in airflow velocity for altitudes relevant to paragliding and hangliding will be reduced by 30%.

The proposed Rincon Trail would provide a dedicated connection from Carpinteria Avenue to Rincon Beach along the existing benched slope adjacent to U.S. Highway 101, including a pedestrian bridge over the train tracks.

The city of Carpinteria has released the Draft Environmental Impact Report (DEIR) for the Carpinteria Rincon Trail project. With the release, a 45-day public review and comment period has opened that will close at 5 p.m. on Monday, April 26, 2021.

Extending from the eastern end of Carpinteria Avenue, in the city of Carpinteria, to Rincon Beach County Park in Santa Barbara County, the proposed trail is 16 feet wide and 2,800 feet long and includes a 160-foot bridge over the train tracks owned by Union Pacific Railroad.

The new, shared-use trail would provide a dedicated connection from Carpinteria Avenue to Rincon Beach along the existing benched slope adjacent to U.S. Highway 101. Future plans for Carpinteria’s Coastal Vista Trail would ultimately extend it from Padaro Lane to Rincon.

The majority of the proposed trail route is located on old, terraced road and rail cuts. Most of the area’s natural landforms have been mechanically manipulated over the years as a result of road, highway and railroad construction dating back to the 1800s. A small unsanctioned trail exists in some areas, including the portion of the proposed trail that goes from the railroad crossing to the Rincon Beach County Park parking lot.

The Rincon Trail is planned to function as the local section of the California Coastal Trail, connecting on the south end to the recently completed bicycle and pedestrian path constructed with the Caltrans HOV project from Carpinteria to the Mobil Pier in Ventura County. Additionally, the city of Carpinteria is in the process of acquiring an easement over two parcels that would complete the Carpinteria Bluffs Trail from the Carpinteria State Beach to the Rincon Trail.

At both ends of the trail are pre-existing parking areas; Rincon Beach County Park has a paved lot and at Carpinteria Avenue there is an existing dirt lot which would continue to provide informal parking for the proposed project. There is also on-street parking near the eastern end of Carpinteria Avenue and at the southern shoulder of Carpinteria Avenue from SR 150 to the terminus, which accommodates roughly 24 cars.

The environmental impact report, prepared by Dudek, indicated several areas of potentially significant impact, however, if the city adheres to proposed mitigation measures, the impact can be reduced to “less than significant,” according to the report. Among areas of impact, the report noted scenic views, biological resources including sensitive wildlife and plant species, migratory wildlife corridors, soil erosion and loss of topsoil, and hydrology and water quality.

According to Dudek, the proposed trail does not connect important habitat areas used by large or small wildlife species. U.S. Highway 101 and adjacent chain link fencing along the southbound lanes of the highway provide impediments to wildlife movement between the bluffs and more inland areas. Wildlife in the area include mountain lions, California black bears, striped skunks and northern raccoons. Additionally, minor changes to wind and weather patterns in a very local setting are not an impediment to birds moving long distance, according to the EIR, particularly since the overall height of the slope should remain at the same elevation.

Wind uplift patterns will be modified by the proposed trail. The vertical airflow velocity will be reduced from 10 to 30% relative to current conditions, according to the report’s airflow analysis. For altitudes relevant to paragliding and soaring activities, the reduction is expected to be closer to 30%.

According to the airflow analysis, the anticipated changes in velocity and turbulence would occur within a short linear distance relative to the distance traveled for a migrating avian species, and avian species regularly adjust to changing weather conditions.

Concerns from the paragliding and hang-gliding community that the launching site over Bates Beach would be impacted were also addressed in the EIR, albeit without recommendations for modifying the trail to preserve the advantageous flying conditions that the soaring community had requested.

“Comment letters assert that such soaring activities have been carried out in the air space over the trail alignment property for several decades, and that the air space is one of a limited number of opportunities for soaring within the coastal environment in Santa Barbara County,” noted EIR authors. “While paragliders and hang-gliders have capitalized on bluff-related uplift during favorable wind conditions to launch from private properties along the bluff faces above the proposed bicycle and pedestrian path alignment, the proposed trail corridor has been dedicated to transportation uses since its construction in the late 1800s (railroad then state highway) … Therefore, while the soaring community has taken advantage of favorable wind and uplift phenomena associated with the existing topography within the trail corridor, neither launching nor landing areas within the trail corridor have been contemplated or formalized in recreation plans adopted by the city of Carpinteria or county of Santa Barbara.”

The report authors continued, “It should be noted that Rincon County Beach Park prohibits the take-off or landing of any type of gliders … In addition, UPRR prohibits pedestrian access across their alignment (precluding direct access to the bluff area that generates the best uplift). Thus, the typical launch area for paragliding and hang gliding to gain access to the air space over the trail alignment is currently from private property adjacent to the trail alignment, not from a sanctioned use public property. The private property owner also retains the option of prohibiting paragliders and hang gliders from using the property as a launch area at any time.”

On April 13 at 4 p.m., the Rincon DEIR will be considered by Carpinteria’s Environmental Review Committee at a virtual public meeting. Comments on the analysis and proposed mitigation measures can be submitted at the April 13 meeting and in writing by April 26 at 5 p.m. Written comments can be sent to Nick Bobroff, principal planner, Community Development Department, 5775 Carpinteria Ave., Carpinteria, CA 93013 or by email at: nickb@ci.carpinteria.ca.us.

In compliance with the Americans with Disabilities Act, assistance is also available to participate in the April 13 meeting or to make a comment. For assistance, contact the Community Development Department at lorenae@ci.carpinteria.ca.us, (805) 755-4410 or the California Relay Service at (866) 735-2929.

"...neither launching nor landing areas within the trail corridor have been contemplated or formalized in recreation plans adopted by the city of Carpinteria or county of Santa Barbara...the typical launch area for paragliding and hang gliding...is...not from a sanctioned use public property." Can you please tell us what hang gliding and paragliding sites exist on sanctioned use public property in Santa Barbara county? Do authorities really think it's fair to force our sports into legal limbo and then build facilities for conflicting public uses on the very few flying sites that remain?