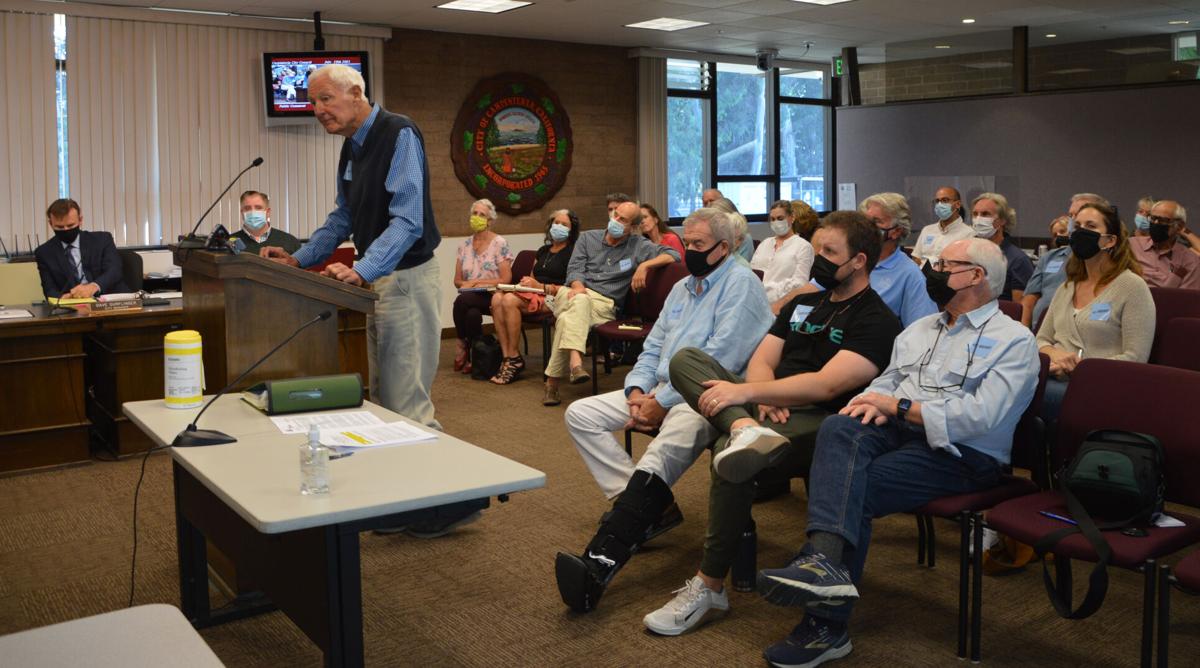 Community members, like Will Carleton at the podium, showed up in droves, both against and in support of the proposed Surfliner Inn project. 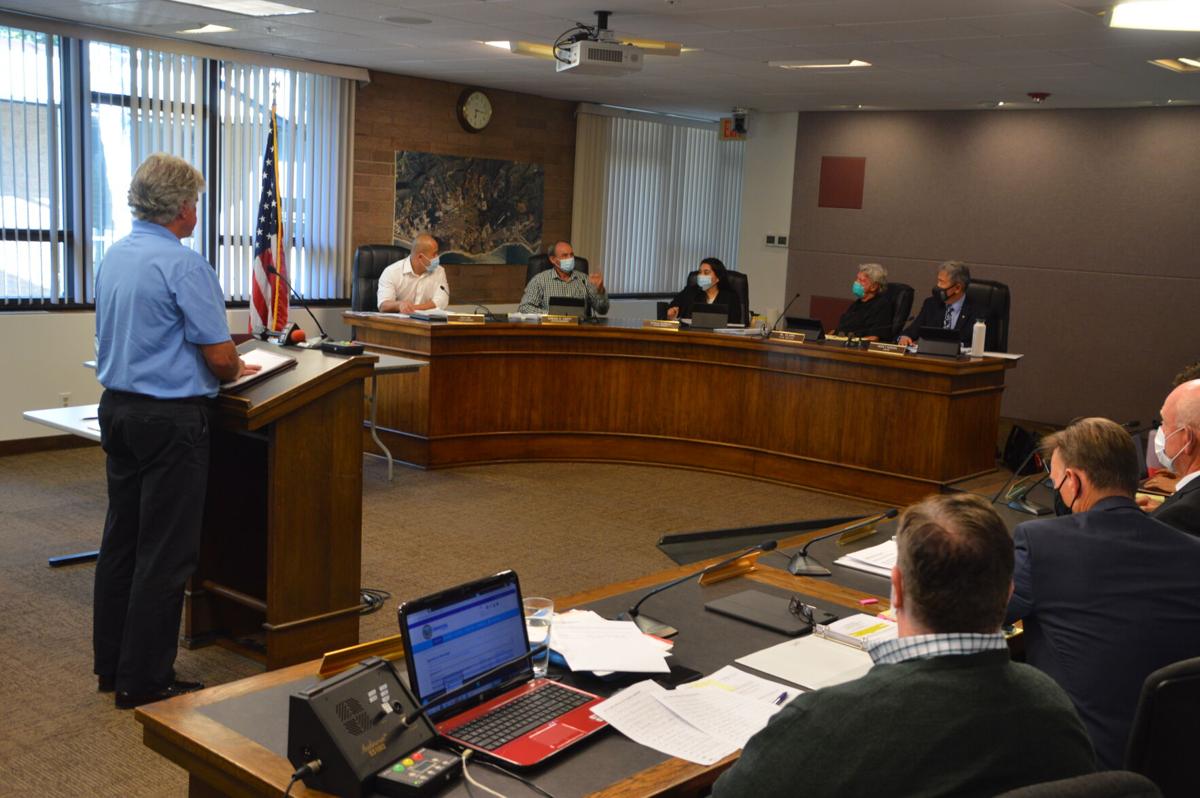 The council voted to approve the lease and development agreement for the Surfliner Inn project, with Vice Mayor Al Clark dissenting.

Community members, like Will Carleton at the podium, showed up in droves, both against and in support of the proposed Surfliner Inn project.

The council voted to approve the lease and development agreement for the Surfliner Inn project, with Vice Mayor Al Clark dissenting.

In a 4–1 vote, with Vice Mayor  Al Clark dissenting, the City Council voted Monday during a special meeting to approve the lease disposition and development agreement for 499 Linden Ave., the site of the controversial, proposed Surfliner Inn project.

The final plans for the project will still need to be revised by the developers, and a final ground lease agreement will be approved or rejected at a future public meeting, city staff emphasized.

“I’d like to thank everyone for coming and attending (...) and making our process a little bit easier,” Mayor Wade Nomura said at the beginning of the meeting.

Matt Roberts, director of city Parks, Recreation and Public Facilities, provided the staff report for the meeting. He clarified that the lease disposition and development agreement (LDDA) is for leasing the land only, not selling it.

Under the proposed contract, the lease would be rented to 499 Linden Managers, the developers, for 55 years for 5.5% of appraised fair market value in annual base rent, paid to the city monthly. The developers will also pay the city 4.5% of gross revenue generated by the inn.

City Attorney Matt Carlson said the construction budget would be around $12 million, with a cost of roughly $35,000 per room; the inn is expected to have a three-diamond rating by AAA.

A conceptual hearing in November 2020 provided the public with tentative plans for what the inn might look like. It will tentatively have 36 guest rooms, four guest suites, a manager’s unit (for a manager who will be on site 24/7), a public rooftop bar, a rooftop event space; a “guest only” rooftop swimming pool area; and a public street level cafe with inside and outside dining.

Roberts said the developers and the city also worked out several off-site improvements for the “benefit of the public,” which include a new public parking lot with 83 spaces, located south of the railroad tracks, west of Linden Avenue and east of Holly Avenue, on undeveloped city-owned property; 16 additional spaces to Parking Lot #3; the relocation of the public restroom currently standing on Parking Lot #3 to vacant property, closer to the beach; and the creation of a new trail extension, connecting Linden Avenue to Holly Avenue.

In regard to parking, the inn would not have any exclusive parking, Roberts said.

All of the above improvements would be funded by the developers, not the city, Roberts emphasized.

Roberts noted that the plans will be revised; he said the developers of the project wanted the confirmation of the approval of an LDDA before “investing those funds into new plans.”

If the ground lease is approved, the developer will begin with the off-site improvements listed above, before beginning construction of the Surfliner Inn itself.

During the meeting, Surfliner Inn partner Whitt Hollis thanked the city staff for their work.

“As you may recall, this process that has been going on inside the city is from your request. We stand before you as the developer that responded to your request for proposal, and you graciously accepted our proposal and over the last three years, we’ve been working very hard to try and get to this point,” he said.

Jeff Theimer, a partner in the Surfliner Inn project who spoke over Zoom, also thanked city council members and staff for their work.

“The Surfliner team accepted the city-led RFP (request for proposal) almost three years ago. Not because we believed that a 40-room boutique hotel would be a financial windfall for us personally, but because we believe, as we do today, a right-sized hotel on Linden would have an outsized benefit on the city of Carpinteria,” Theimer said.

“As locals, we could help ensure that the eventual project represented the unique small-town characteristics of the downtown beach neighborhood, and also reflect the laid back, Carpinteria lifestyle that we all love,” he added.

Community members showed up in droves, both against and in support of the project. Public comment members were given a two-minute limit to speak due to the number of people in attendance.

Susan Skenderian posed questions to the council about what the revised inn might look like, bringing up concerns about the location of the inn, saying it is too close to the active railroad tracks.

“We have six motels or hotels. We have 562 plus rooms in Carpinteria. We have a state park, we have rentals down at the beach. We have Padaro and Sandyland and monthly rentals through the city. There are plenty of places to stay,” Skenderian said.

“This is setting a precedent. Do we have a master plan? Do we think we’re going to have hotels all along the beachfront?” she asked.

Sean White, who said he moved to the area in early 2020 but has been visiting since the late 1960s, said he has concerns about the project.

“I’ve come here all the time, whether it’s for a root beer float or to buy things at the farmer’s market. And I often picked trash out of the beach (...) I’ll tell you that as much as I’ve heard about the small footprint of this hotel, it has a very large profile,” White said.

Betty Summer said she is against the project, explaining that “public land is very special.”

Carla Stein, a 41-year resident of Carpinteria, said she manages a 78-unit condo complex near the beach in Carpinteria, which handles weekly vacation rentals.

She said her complex gets hundreds of families that stay but noted that she’s seen millennials who want to explore the area, to dine and visit museums and bring back money to the community, rather than to “hunker down” in the campground or on the beachfront.

“The Surfliner Inn is a yes, yes, yes. It is reasonable to want to make that corner visitor-serving. Is it physically possible? Yes, when you consider what used to be there and what would still be there if it weren’t for five very narrow-minded people sitting in those chairs (...) and yes, when you recognize the need that exists for this type of lodging.”

Lorraine McIntire, who said she has lived in Carpinteria for seven years, but has been visiting the campgrounds since 1978, said she is in favor of the hotel.

She said the area needs more “vibrancy,” noting that people on the train “will stop and look at (the hotel) and go, ‘I’m going to stay at that one day.’”

“This is public land. But so is Stearn’s Warf, so is the Santa Barbara County Bowl: it’s public land, leased for private interests, for the benefit of the public.”

Councilmember Roy Lee, who runs Uncle Chen’s Restaurant, said “anyone who has ever operated or owned a business here in Carpinteria, (knows) it’s been tough.”

“It’s been difficult. Especially with the pandemic. The Surfliner Inn, I believe will help our local businesses for years to come,” he said.

Councilmember Natalia Alarcon posed some questions to legal counsel about the initiative by community members to put the issue on the ballot. City legal staff Jena Shoaf Acos said the initiative is a separate city process but noted that the initiative could be the subject of a future city council meeting.

“The existence of the initiative process does not preclude the council from taking action on the agreement tonight,” Shoaf Acos said.

Alarcon noted that she does have concerns about neighborhood impact and having the hotel right next to an active railroad.

Clark, the only dissenting vote, said he doesn’t support the “privatization of public good for personal gain.”

“This might have been more of a difficult decision for me if so many of our public citizens hadn’t been against the project,” he said. “I think what the public good is for me, is loss of open space, loss of views, protentional loss of water resources, loss of small-town character and identify, loss of small-town traffic circulation, and loss of parking.”

He challenged the idea that the project would bring much-needed funds back to the town, stating that Measure X brings in over $3 million a year for the city.