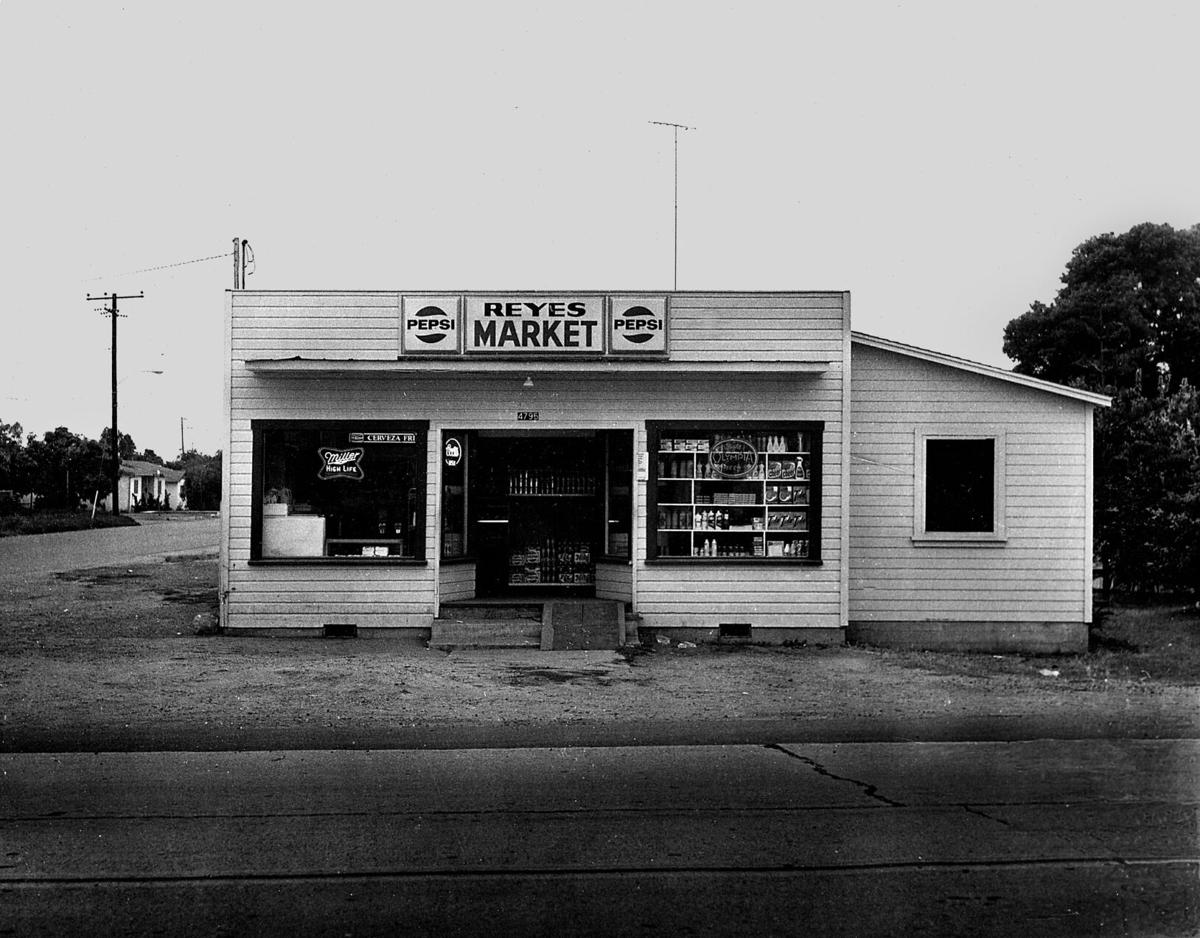 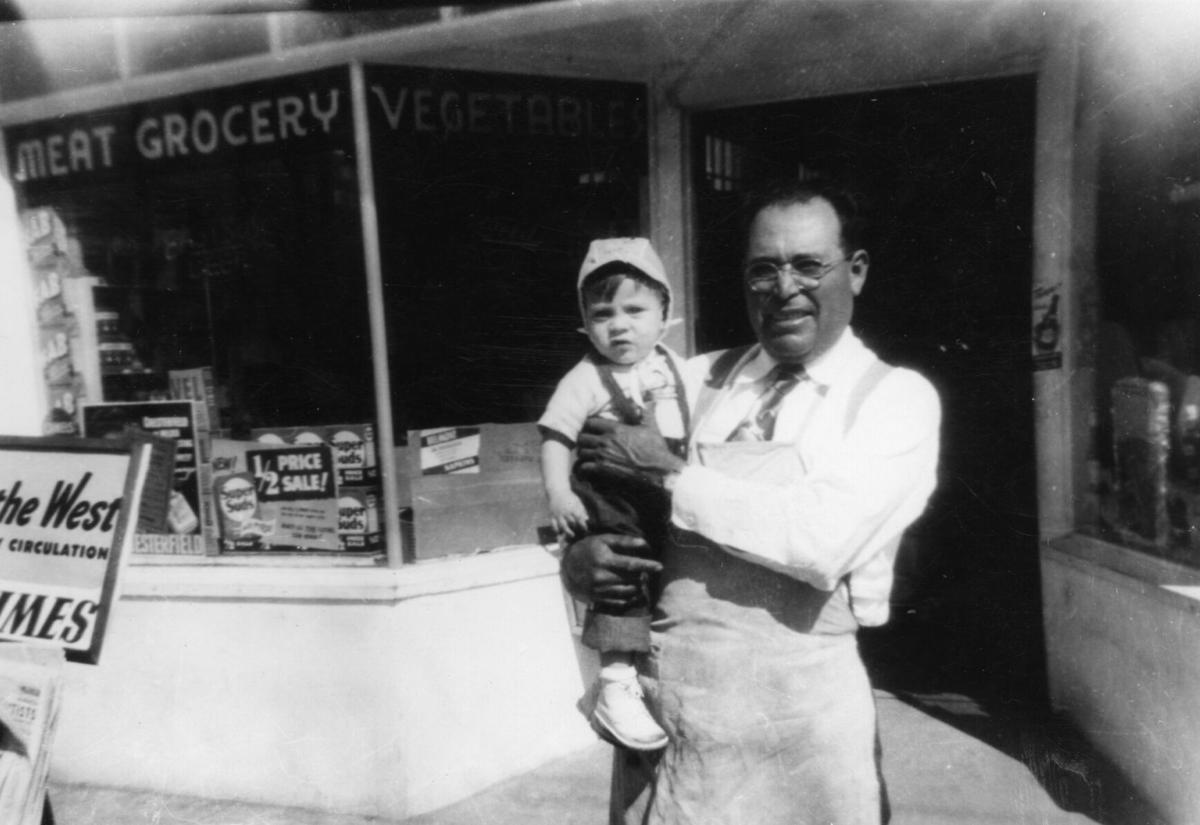 Cervantes Market was on the east side of Linden Avenue on the 600 block. Owner Candelario Cervantes holds the author of this Throwback Thursday column, Jim Campos, not even a year old yet, in 1948. Carpinterians of today may recognize the front of the store. It became the Deli House for many decades and is now Giannfranco’s Trattoria. 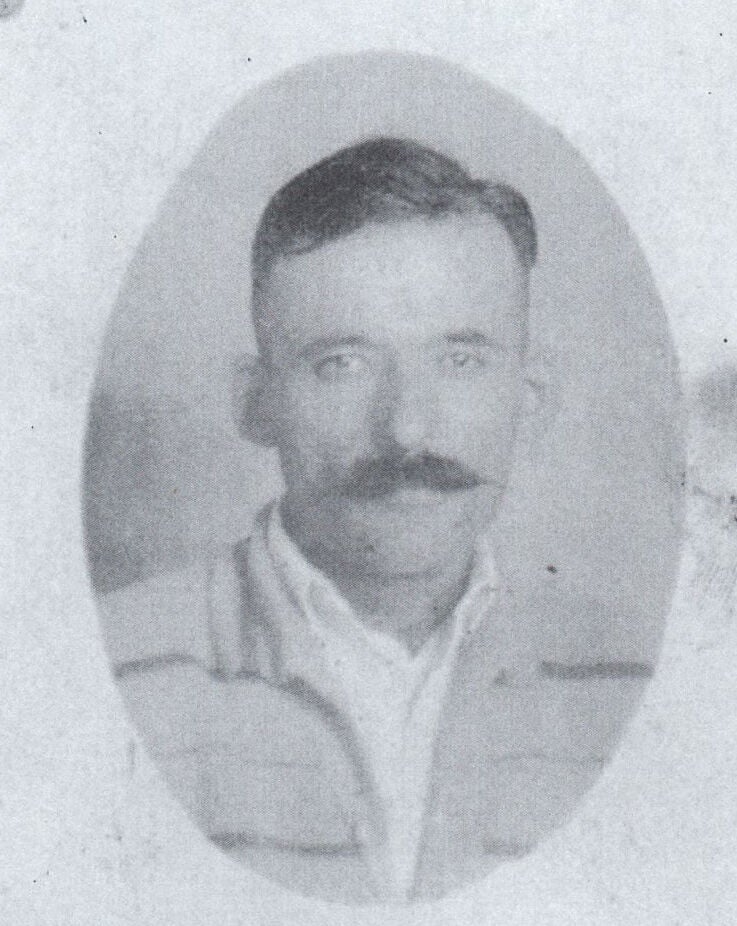 Jesus “Jess” Villalpando was the owner of Villalpando’s Market from 1946-1966. It was on the west side of Linden Avenue on the 600 block, across from Cervantes Market. Both markets were built in 1946.  Sal Campos recalls nailing in boards during the construction of both establishments after his return from military service. 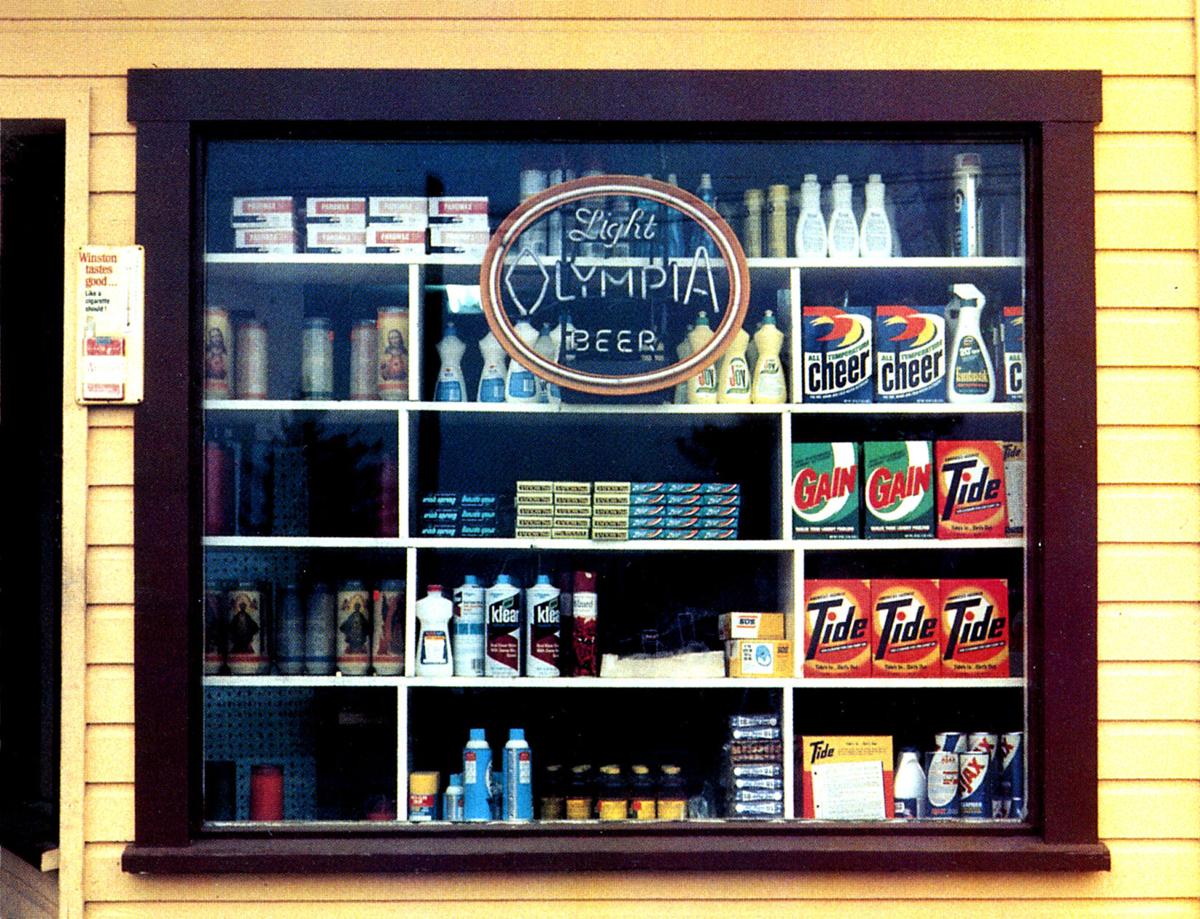 Looking at home goods through the front window of Reyes Market, circa 1980, under the proprietorship of Art Jr. and Diane Reyes.

Cervantes Market was on the east side of Linden Avenue on the 600 block. Owner Candelario Cervantes holds the author of this Throwback Thursday column, Jim Campos, not even a year old yet, in 1948. Carpinterians of today may recognize the front of the store. It became the Deli House for many decades and is now Giannfranco’s Trattoria.

Jesus “Jess” Villalpando was the owner of Villalpando’s Market from 1946-1966. It was on the west side of Linden Avenue on the 600 block, across from Cervantes Market. Both markets were built in 1946.  Sal Campos recalls nailing in boards during the construction of both establishments after his return from military service.

Looking at home goods through the front window of Reyes Market, circa 1980, under the proprietorship of Art Jr. and Diane Reyes.

The first Mexican market in Carpinteria appears to have been opened by Tony Sanchez in 1927. Always a small grocery store, it was situated on the southeast corner of 7th Street and Holly. It was perfectly placed for its primary clientele, the Mexican immigrant population living west of Linden Avenue. Mr. Sanchez was listed in the Carpinteria Directory of 1927, when the only telephone numbers in Carpinteria were pretty much the domain of businessmen. Sanchez Market stayed open until the 1950s, but it is largely forgotten as other Mexican markets gained bigger reputations.

A few years later, a second market was listed in the Carpinteria Directory.  This market would rise to greater prominence in Carpinteria.  It was Osuna’s Market listed initially at 802 Coast Highway in Old Town. It was on the corner where Bob’s Garage currently resides. By 1940, Y. C. Osuna built a newer store on the opposite corner, at 710 Coast Highway, where the store, under a new name, sits to this day as Mi Fiesta Market.  Osuna’s Market closed circa 1970.

Despite some remodeling, Mi Fiesta Market looks similar to what Osuna’s Market looked like at the time of its closure.  In 2030, if the market is still doing business at the corner of Carpinteria Avenue and Cramer Road, it will reach the 100-year mark and can officially label itself as a true antique. Unfortunately, no pictures that we know of exist of Osuna’s Market, nor of the early years of Mi Fiesta Market.

The decade of the ‘40s, saw several Mexican grocery stores make their debut in Carpinteria.  By far, the most important of these was Morales Market.  It was built a couple of blocks from the Linden business district on the northwest corner of 7th Street and Elm Avenue.  Carpinterians of today almost assuredly have no recollection of it, but along with Osuna’s/Mi Fiesta Market, it is the most iconic of the community’s Mexican markets.  It was opened by Sabino and Dolores Morales, known as Don Sabino and Doña Lola. Their grocery store even sold home made wine from a grapevine they had planted near the store. The current owners of the Market, the Romeros, have a cutting of the old grapevine which they hope to use someday. Institutional status awaited Morales Market, but only after it was moved to a different location under a different name.

In 1952/53, Jesus “Chuy” Gonzales bought the lease for the business. He picked up the building and moved it to another Morales property at the southwest corner of the Coast Highway (Carpinteria Avenue) and Holly Avenue. As the key foreman at the Carpinteria Lemon Association (CLA), Gonzales was well known to all of the employees at the packinghouse.  Additionally, Gonzales Market was next door to the rival Carpinteria Mutual Citrus Association’s bracero labor camp.  He was in a superb situation.  The braceros at the CLA labor camp that was next to the Aliso School would walk the extra distance to shop at Gonzales Market out of loyalty.  Osuna’s Market was directly across the street from the CLA labor camp, but never mind.

Gonzales offered a line of credit to the braceros from both labor camps. They would settle their accounts on payday.  Business thrived, as you might imagine.  But, after only three years, Gonzales made the decision to shift his business to Western wear, to clothe the men at the labor camps. He had tested the idea of selling clothes and shoes out of a side room at the grocery store. He opened a new store next to Rockwell Cleaners that, until recently, was the office of Coastal View News.  He had learned that the braceros bought only the best quality clothes to dress themselves after work hours—shirts from Arrow, Van Huesen and Pendleton and Florsheim shoes. Gonzales supplied the preferred fashions. And, what became of Gonzales Market at the corner of Carpinteria Avenue and Holly Avenue?  Arturo Reyes took it over. Yes, it was now Reyes Market, established 1956.

Mr. Reyes’ son, Arturito (Art, Jr.), was the market’s butcher. He made the market’s first significant modification by preparing a variety of huge torpedo sandwiches at the very low price of 25 cents. The feature was a hit.  Laborers would pick up a torpedo sandwich before heading off to work, or come in around the noon hour to have a fresh one prepared.

Mi Fiesta Market, the former Osuna’s Market, may have picked up on the successful innovation at Reyes Market.  Mi Fiesta took the innovation a step further.  The market began preparing a variety of gourmet burritos.  I remember beginning my career as an educator in 1971 at Aliso School.  The Aliso staff loved Mexican food and had Delgado’s Restaurant, another Carpinteria institution, nearby. With a short lunch break, however, Mi Fiesta Market was the go-to place for a tasty burrito on the run. It still is.

The Reyes family operated their market for 38 years.  In 1994, Salvador and Maria Romero took hold of the reins. “Reyes” was such a trusted brand name by that time in Carpinteria that the Romero’s retained it. They also received permission from the property owner to make improvements to the building.  The Morales family—yes, the original owners of the business going back to the 1940s!—assented. The Romeros expanded by tearing down the west facing wall, and added a full kitchen behind the deli counter where Arturito Reyes had introduced his huge submarine sandwiches, the torpedos.  But the wall still had the original Morales Market signage with artwork of products like Coca-Cola and 7-Up. If only they had thought of taking a photo for posterity!  Alas.  Today, the kitchen at Reyes Market is its most salient feature. Some of the best Mexican food in Carpinteria is served there.

There are at least two other Mexican Markets that deserve a mention.  Indeed, in the 1940s there were two popular ones on the 600 block of Linden that were constructed in 1946. They faced each other on opposite sides of the street.  They were owned by Mexican-American families with strong entrepreneurial sensibilities. Cervantes Market was owned by Candelario “Candy” Cervantes on the east side of the street where the Deli House would follow it, and where Giannfranco’s Trattoria is now. His son, Rudy, was the butcher, and his other son, Larry, managed the store and prepared enchiladas daily. Cervantes also had a tree-trimming service. On the west side of the street next to Joe Wullbrandt’s Welding Shop was Villalpando’s Market owned by Jesus “Jess” Villalpando. It is the Tidepools Store, today.  The Villalpandos were a large family and owned several businesses on Linden Avenue and on the Coast Highway (Carpinteria Avenue)—a beauty shop, TV & Radio Repair Shop, an ice cream parlor and a Union 76 Service Station.

Lee Hohweiler reminisces, “I’d stop by Joe’s Welding Shop to visit on my way to Villalpando’s Market to buy wax mustaches, red lips and little wax bottles of colored sugar water. Growing up in Carp was very special.”  Both of these markets closed in the mid-1960s as Candy Cervantes returned to Mexico, and Mr. Villalpando passed away.

The Mexican markets in Carpinteria started as comfortable places to shop for the Mexican community in the ‘20s, ‘30s and ‘40s.  Good places to shop and eat, however, bring people together.  The two oldest markets longevity-wise, Mi Fiesta and Reyes, have attained near institutional status, and a relative newcomer, Kim’s Market on Via Real, halfway between Santa Monica Road and Cravens Lane, started by a Korean woman, Kim Monroe, circa 1975—but staffed by a Mexican butcher and cooks—continue to provide comfort food for Carpinterians.