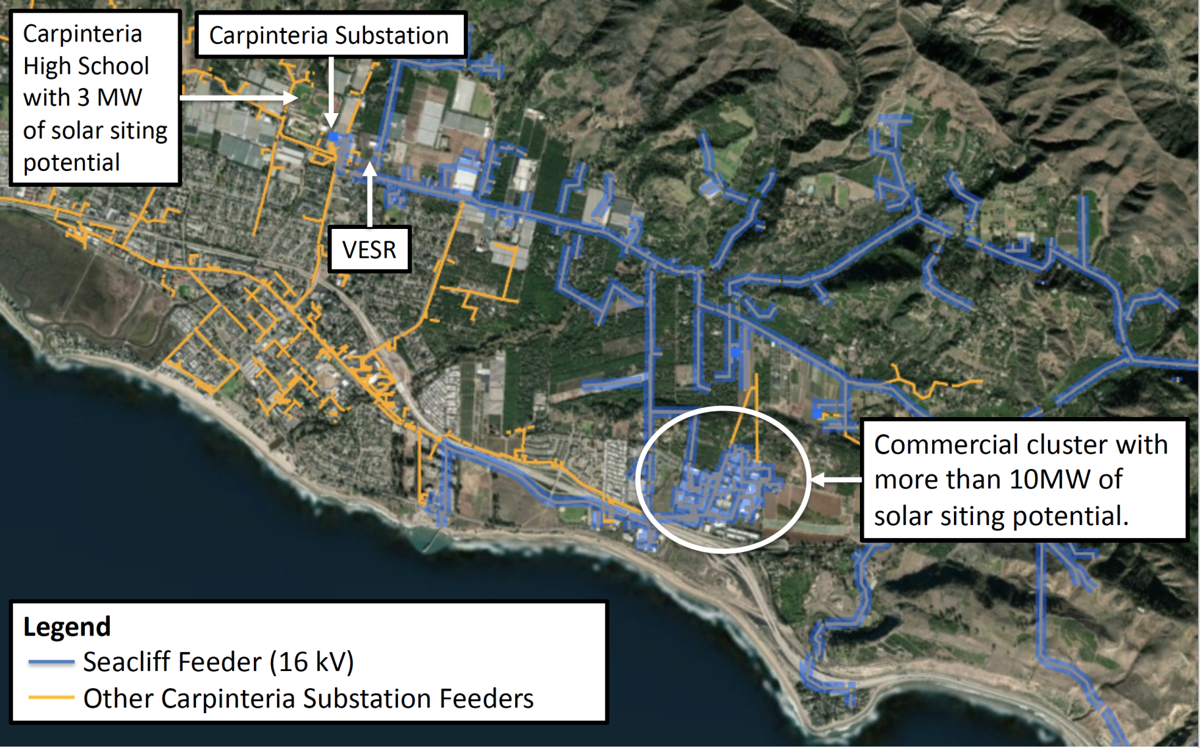 Southern California Edison has broken ground on a new big battery project on Foothill Road to help bolster the area’s resilience to an electricity outage.

For electricity to reach Carpinteria, it first travels 40 miles from Ventura to Goleta by way of a transmission line (shown in purple), and then back down to Carpinteria via distribution lines (shown in gold).

Southern California Edison has broken ground on a new big battery project on Foothill Road to help bolster the area’s resilience to an electricity outage.

For electricity to reach Carpinteria, it first travels 40 miles from Ventura to Goleta by way of a transmission line (shown in purple), and then back down to Carpinteria via distribution lines (shown in gold).

Construction has begun on a new renewable energy resource project in Carpinteria in the unincorporated Santa Barbara County area near Foothill Road and Linden Avenue.

The big battery project, known as the Vallecito Energy Storage Resilience (VESR) Project, is expected to provide foundational resilience to the portion of Santa Barbara County, including the Carpinteria Valley, which is served by Southern California Edison (SCE)—a highly vulnerable grid area known as the Goleta Load Pocket (GLP).

The entire region, from Point Conception to Lake Casitas, is currently dependent on one point of interconnection to the transmission system at the Goleta Substation, located at the top of Glenn Annie Road. With a 40-mile-long transmission path that begins in Ventura and traverses the heart of extreme fire, mudslide and earthquake risk zones on the backside of the Santa Ynez mountains, the GLP is extremely vulnerable to a transmission outage. Moreover, after reaching the Goleta Substation, electricity must then travel back down to Carpinteria via a web of distribution lines. Additionally, SCE has reported that the grid will go down at some point, and when it does, it could be out for days or even weeks in Carpinteria.

Proponents hope that the VESR will not only provide resilience for the South County, but also “stage a Carpinteria Community Microgrid that includes critical community facilities like the nearby Carpinteria High School, an official Red Cross emergency sheltering site,” as stated in a letter of support addressed to the Santa Barbara County Board of Supervisors and signed by the Sierra Club Los Padres Chapter, Community Environmental Council, Carpinteria Unified School District and Carpinteria Valley Association (CVA), among other local environmental and community-based watchdog groups.

VESR is expected to provide more reliable and resilient grid services to the Carpinteria region. “Reliable means the grid won’t go down,” said Craig Lewis, executive director of Clean Coalition, a nonprofit organization that has spearheaded the initiative, “and resilient means that when the grid goes down, which will happen at some point for various reasons, certain loads—especially those in critical facilities—will stay on.”

In addition to increasing the reliability and resiliency of the electricity grid, Clean Coalition’s mission is to accelerate the transition to renewable energy on a modern grid. Along with VESR, Clean Coalition is working to install solar panels at Carpinteria High School and the office park near Bailard Avenue, sites that have been identified as having the potential to generate 13MW of solar power.

Similar staging of solar microgrids and electric vehicle charging infrastructure has been implemented at schools throughout the Santa Barbara Unified School District, and Lewis hopes that Carpinteria schools will be able to benefit from the groundwork already established by Santa Barbara Unified.

“Battery storage projects, large and small, are signs that humanity does have a future,” CVA Vice President Jim Taylor told Coastal View News. “Already, a gas peaker plant in Oxnard was cancelled in favor of storing the energy for times of peak demand. That’s less natural gas burned, and less carbon added to the atmosphere. Ultimately, local generation of electricity from solar panels, and local storage of the electricity produced, will help us achieve energy reliability and reduce greenhouse gas emissions.”

“Clean energy storage is vital to our future,” First District Supervisor Das Williams told CVN. “As we saw last week, we need more strategic backup to ensure reliability of energy service. We also need to do our part to reduce the impacts of climate change, which we know in fire country is a direct threat to human health. This project (VESR), and others like it, accomplish both our environmental and reliability goals.”