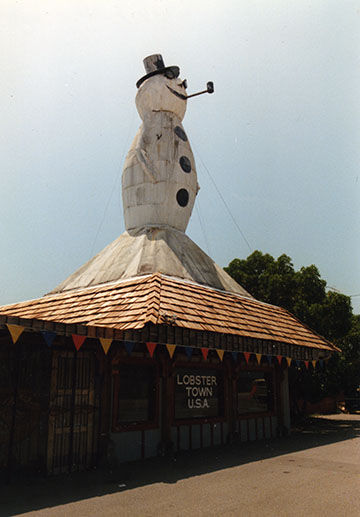 A skinny Frosty replaced the rotund one that was blown off the roof by a strong wind. It was acquired by Tom Merkel in the late 1980s and placed in his Cuyama Valley property. Merkel has passed away, but according to David Griggs, curator of the Carpinteria Valley Museum of History, Frosty is still most likely sitting in the Cuyama Valley, off of Highway 33 opposite the Half Way Café. 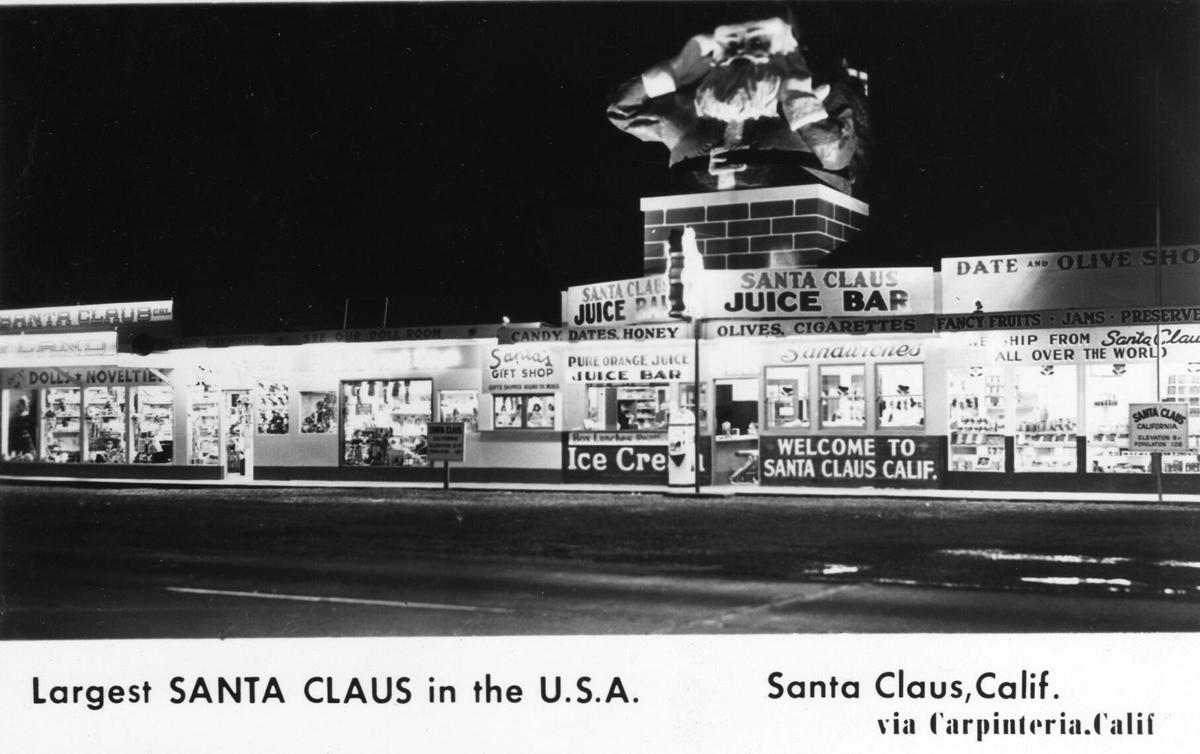 Santa Claus Lane at night, circa 1960, captured in all its allure at the height of its popularity.

A skinny Frosty replaced the rotund one that was blown off the roof by a strong wind. It was acquired by Tom Merkel in the late 1980s and placed in his Cuyama Valley property. Merkel has passed away, but according to David Griggs, curator of the Carpinteria Valley Museum of History, Frosty is still most likely sitting in the Cuyama Valley, off of Highway 33 opposite the Half Way Café.

Santa Claus Lane at night, circa 1960, captured in all its allure at the height of its popularity.

In 1948, a group of enterprising people, the Santa Claus Corp, created a village of shops themed and named after Christmas images. The village sat on the Coast Highway near Carpinteria’s Old Town in the direction of Padaro Lane. They paid artist Kenneth Vaughn $500 to build a huge head and torso of Santa Claus atop one shop and put reindeer on another. Later, Frosty the Snowman was added to yet another roof top. A choo-choo train for the kiddies, the Santa Claus Unlimited, carried its passengers on a loop of tracks in front and back of the shops. The Santa Claus statue was a marvel, 18 feet tall and weighing 2.5 tons!

In 1954, the 101 Freeway relieved the Coast Highway of its duty of transporting traveling motorists through town. It effectively divided Carpinteria into two parts, a north and south side. Main thoroughfares like Vallecito and Santa Monica Roads were divided. The bottom part of Santa Monica Road was renamed Plum Street. The new 101 Freeway also cut off the portion of the Coast Highway that led motorists directly through Santa’s village. Santa Claus Corp would have to detour customers off the 101 in Santa’s direction if they were going to survive economically. They came up with the idea of changing the name of their Coast Highway stretch to Santa Claus Lane. They petitioned the Santa Barbara County Board of Supervisors to make the change. Here’s how the proposition went down as reported by the Santa Barbara News-Press on Nov. 25, 1955:

After tossing the issue back and forth for several weeks the board of supervisors today voted to name that portion of the old Coast Highway fronting the Santa Claus section near Carpinteria, Santa Claus Lane. The name change had been requested by the Santa Claus Corp, and other property owners along the road. It had been opposed by Vera Arnold, president of the Plasti-Glaze Co., 3785 Coast Highway, on the grounds that her current address is known throughout the country. No one was on hand to discuss the name change. The motion was carried unanimously. Later, Supervisor R. B. McClellan served notice on the board that he would not vote again to change the name of a country road or street for commercial reasons. “We should establish a policy against such a practice” he said. “Those are my sentiments” commented Supervisor Paul E. Stewart.

The name change to Santa Claus Lane proved to be a boon for business. Billboards on the 101 lured in the traveling motorists. The lane became so popular that the owners of the Date & Olive Shop, Patrick and June McKeon, began a worldwide mail order business via catalogue. The McKeons were also allowed to create a mini-post office inside the shop that did a booming business during the Christmas season. It was permitted as a substation of the Carpinteria Post Office. One could mail Christmas cards and have them post-marked from Santa Claus, California!

Anecdotal stories about Santa Claus Lane have been the subject of books, magazine articles and TV shows. Here are a couple more from the author’s family experiences. The original Frosty the Snowman was a beautiful creation built in the late 1950s by the owner of the Frosty Shop, Bob Roberts. He hired a crew of carpenters, including Maurice Reyes (father of the author’s wife, Valerie). The rotund Frosty, unfortunately, wasn’t around long as a strong wind blew him off the rooftop. The snowman was replaced by a skinnier aluminum version playfully said to have been melted by the sun. Dan Campos, one of the many engineers to conduct the Santa Claus Unlimited over the years, remembers a little boy in 1970 trying to board his train while it was moving. The boy succeeded in getting one leg in, but the rest of him dragged onto the platform. Horrified, Campos came to a screeching stop. The boy’s mother quickly came to his rescue. Unfazed, she said, “It happens,” while licking a napkin and cleaning his wounds.

Santa’s Village at Santa Claus Lane is now a thing of the past, gone. Newcomers to Carpinteria must surely be baffled by the lane’s name that offers little trace of its Christmas past. New shop owners on the lane have petitioned the Santa Barbara County Board of Supervisors to rename it, but this time true to the vow made by Supervisors McClellan and Stewart in 1955, to no avail.

As far as the creations that once graced the roof tops of Santa Claus Lane, one can still catch a glimpse of the original Santa’s head and torso. Look to the mountainside of the 101 Freeway between Rice Road and Del Norte Avenue next time you are traveling through Oxnard.