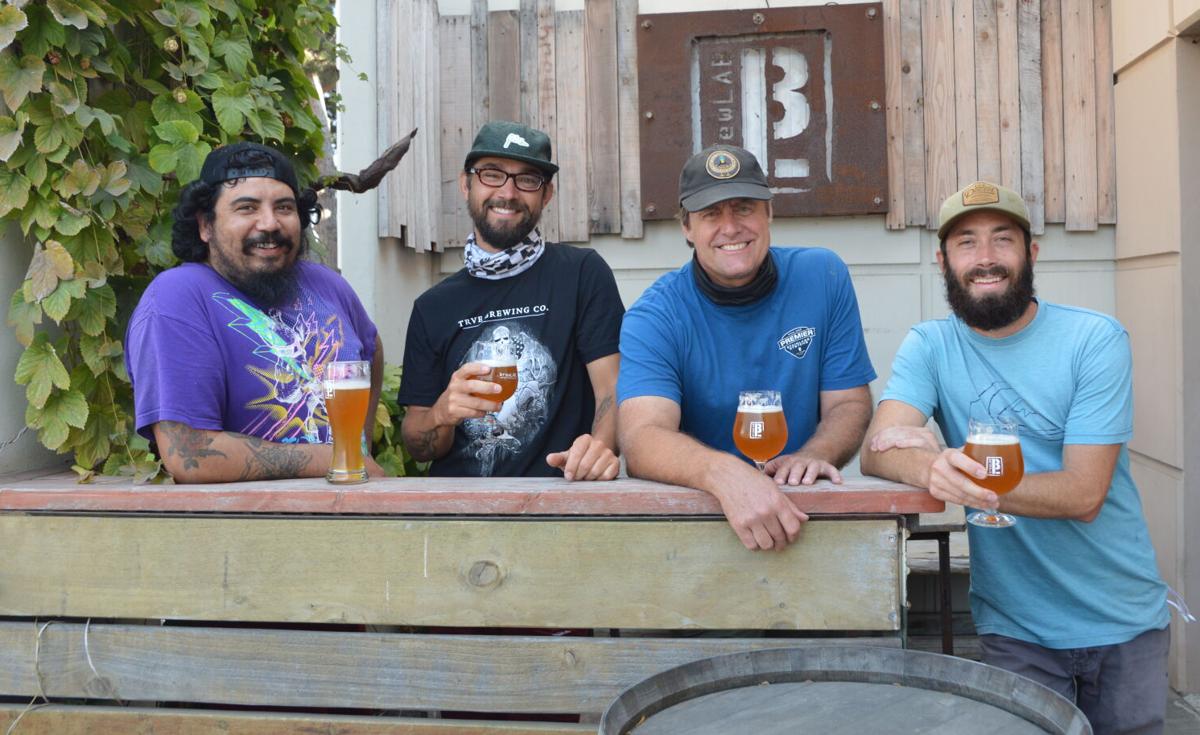 From left, brewer David Mendoza and brewLAB owners/brewers Peter Goldammer, Cliff Gordon and Steve Jarmie take time out to enjoy the fruits of their labors on the front patio of the brewery. 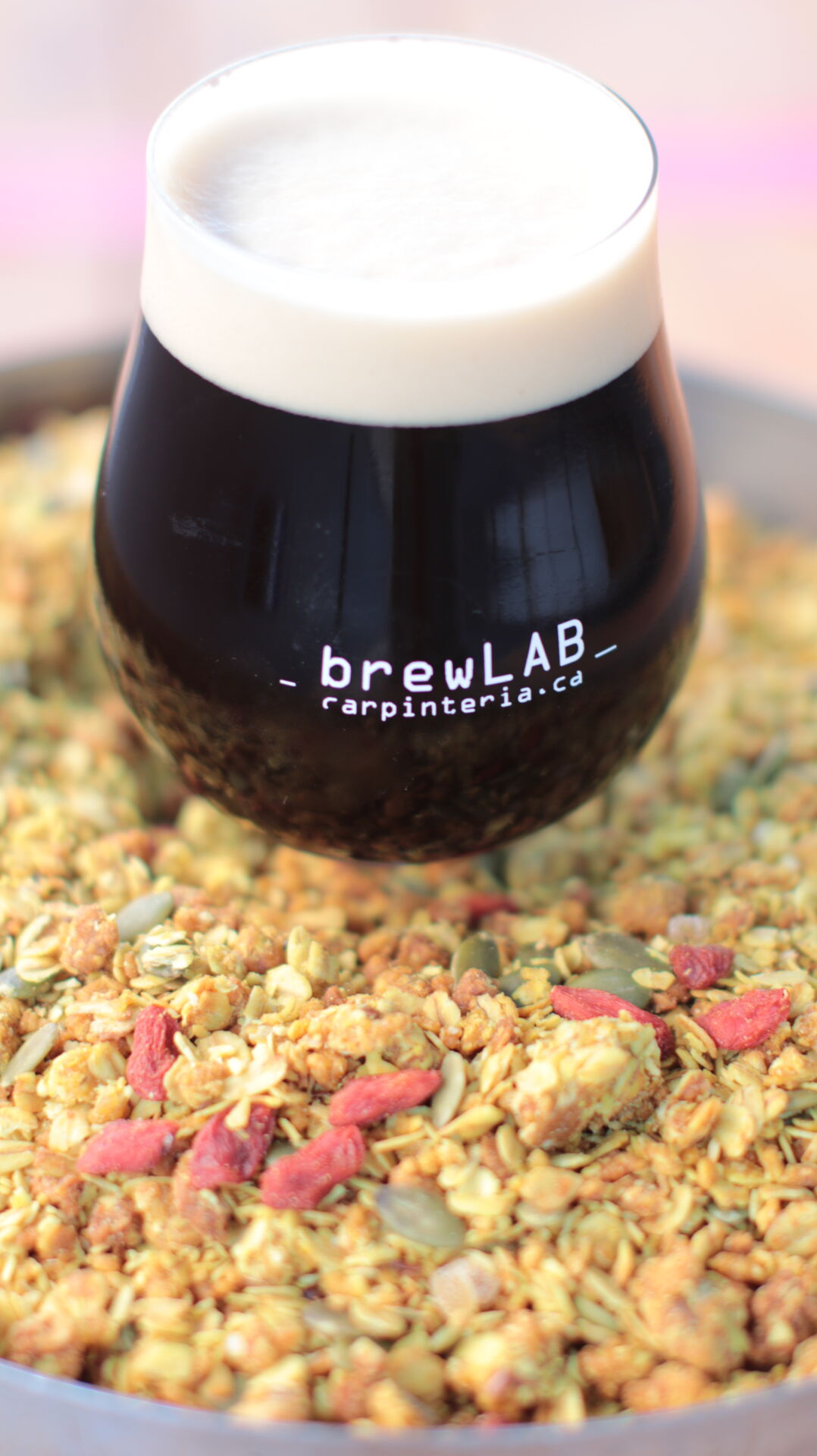 One of many unique beers on tap this week, brewLAB’s Saaremaa is a Baltic-style porter brewed with ginger, turmeric, goji berry and  Ocean Ranch granola (8.0% ABV 31IBUs).

From left, brewer David Mendoza and brewLAB owners/brewers Peter Goldammer, Cliff Gordon and Steve Jarmie take time out to enjoy the fruits of their labors on the front patio of the brewery.

One of many unique beers on tap this week, brewLAB’s Saaremaa is a Baltic-style porter brewed with ginger, turmeric, goji berry and  Ocean Ranch granola (8.0% ABV 31IBUs).

In six years, Carpinteria’s beloved brewer-owned and run brewLAB has stuck with a plan of slow, organic growth built from the ground up. The self-proclaimed shoestring startup hardly had any starting capital. With the help of Peter Goldammer, one of brewLAB’s founders and a skilled craftsman and designer, they built most of the tasting room from salvaged/refinished materials, including the lights, the bar, the walk-in cooler and the front patio. “Building goes much slower at this pace, but it kept our start-up costs down and felt good to be doing the work ourselves in an organic fashion,” said Steve Jarmie, one of brewLAB’s founders. “It has taken a lot of patience and a lot of sweat equity, but we’ve learned so much from the experience.” BrewLAB’s third co-founder is Robert Peed.

“Back in 2008, one of Rob’s family members gave him a home brewing kit and we brewed our first batch of beer in his mom’s kitchen,” Jarmie recalled. “Even though it was the most basic (almost cheating) way to brew beer, we were both so intrigued with the process and with more research decided we wanted to do it the real way, which snowballed into this huge attraction.” Peed later attended UCSB, and was completing a permaculture internship at Orella Ranch in Gaviota when he met and formed a friendship with Goldammer over their mutual interest in brewing. In 2012, Goldammer was renting half a unit in the same complex where brewLAB currently resides for his carpentry work. When his partner decided to back out, the Goldammer, Peed and Jarmie took the opportunity to take over the space and started planning brewLAB. The brewery opened with zero advertising in September 2014 and has relied heavily on just word of mouth even to this day.

Since opening in 2014, Peed has left to pursue other projects. In 2018, a customer, community member and company friend, Cliff Gordon joined the team, bringing to the team investment potential, a wide skill set, 20-plus years of brewing experience, and a background in chemical engineering.

Since opening, the team has maintained their brewer-run, brewer-owned status with a single employee, David Mendoza. Jarmie commented, “In the brewing industry the brewers are usually hiding in the back making the beer, which means they don’t build relationships with the everyday customer. It has always been important for us to bridge that disconnect. For a brewer, the only thing more fun than making beer is sharing it with people and talking about it.”

Brewer-ownership gives the team the opportunity to create more-obscure projects than might otherwise be possible. BrewLAB has the leeway and ability to be experimental and creative with their ingredients and techniques. Since they opened six years ago, brewLAB has been using a small 1.5 barrel/45-gallon brewing system that they designed and built themselves. “When you’re only brewing 45-gallons you can push the boundaries without the stress of making a huge batch of something you may be trying for the first time. We use almost all organic grains and source as many local ingredients as possible such as honey, fruit, herbs and flowers.”

According to Jarmie, “brewing is a great blend of both science and art. It has so much potential for different flavor profiles and the use of all kinds of unique ingredients and even different types of brewing techniques.” The brewLAB brewers realized that with so many avenues to explore, they could create new tastes for their customers. “We are different because of our desire to continually create new things. Much like how an artist loves to show their art at an art show, a brewer loves it when they can provide people a new experience with drinking beer. It’s part of our goal to always have an ever-evolving range and variety of styles.”

When the Covid-19 pandemic hit, brewLAB had just invested in new equipment and were in the middle of a large expansion. They have been able to carry out the expansion projects throughout the past few months and have recently reopened their outdoor seating areas. BrewLAB is located at 4191 Carpinteria Ave., #8, or order a beer to-go at brewlabcraft.com.