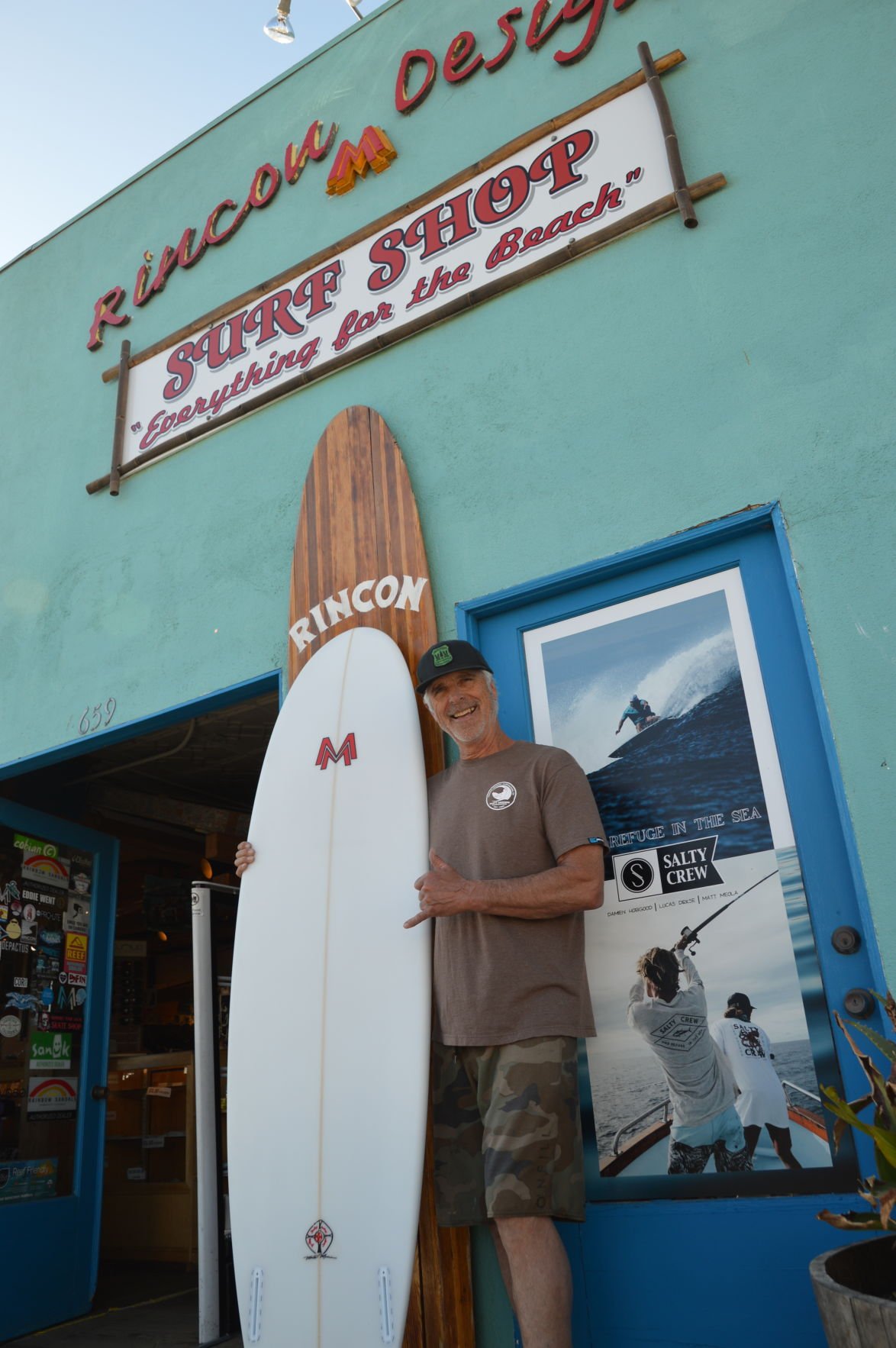 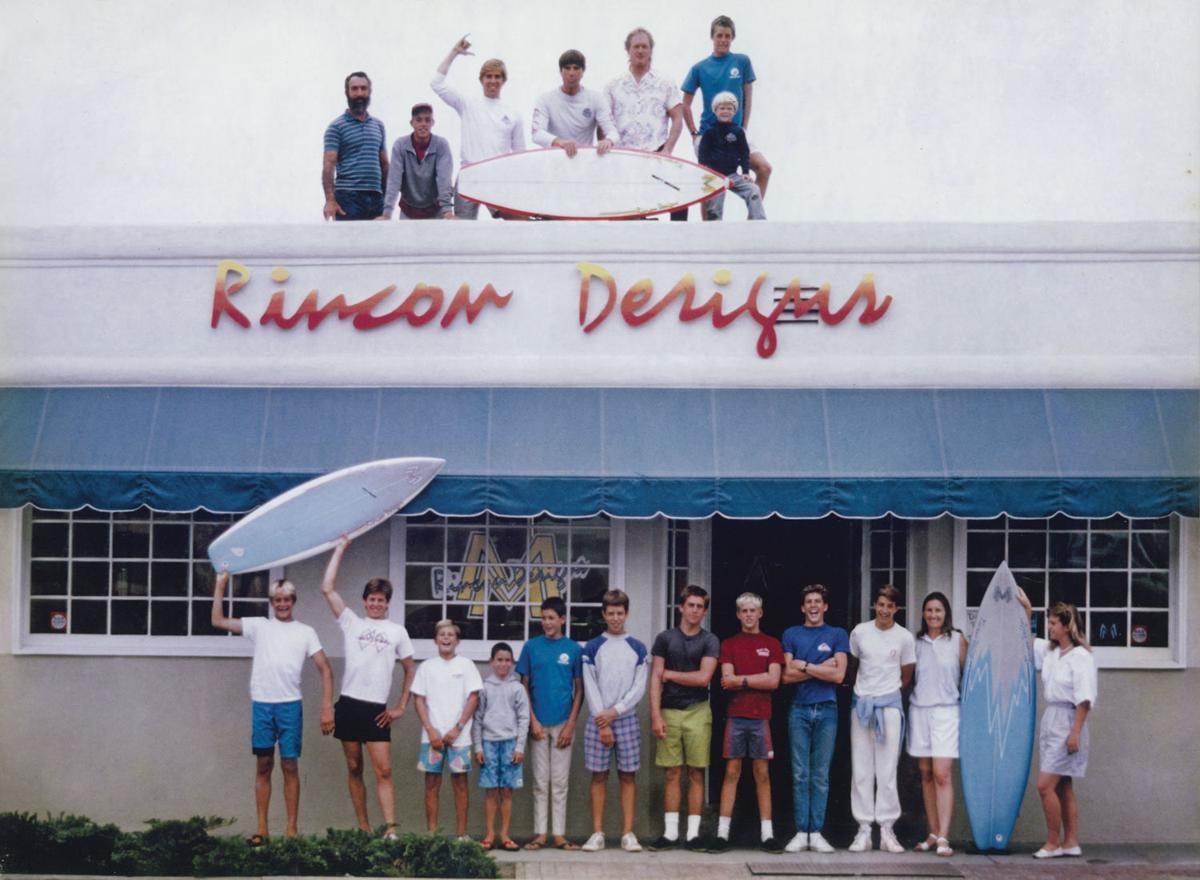 A new wave of 80s- and 90s-era surfers benefitted from the Rincon Designs shop (shown here at the building that is now Esau’s) as well as Moore’s deep wave-riding experience and craftsmanship. 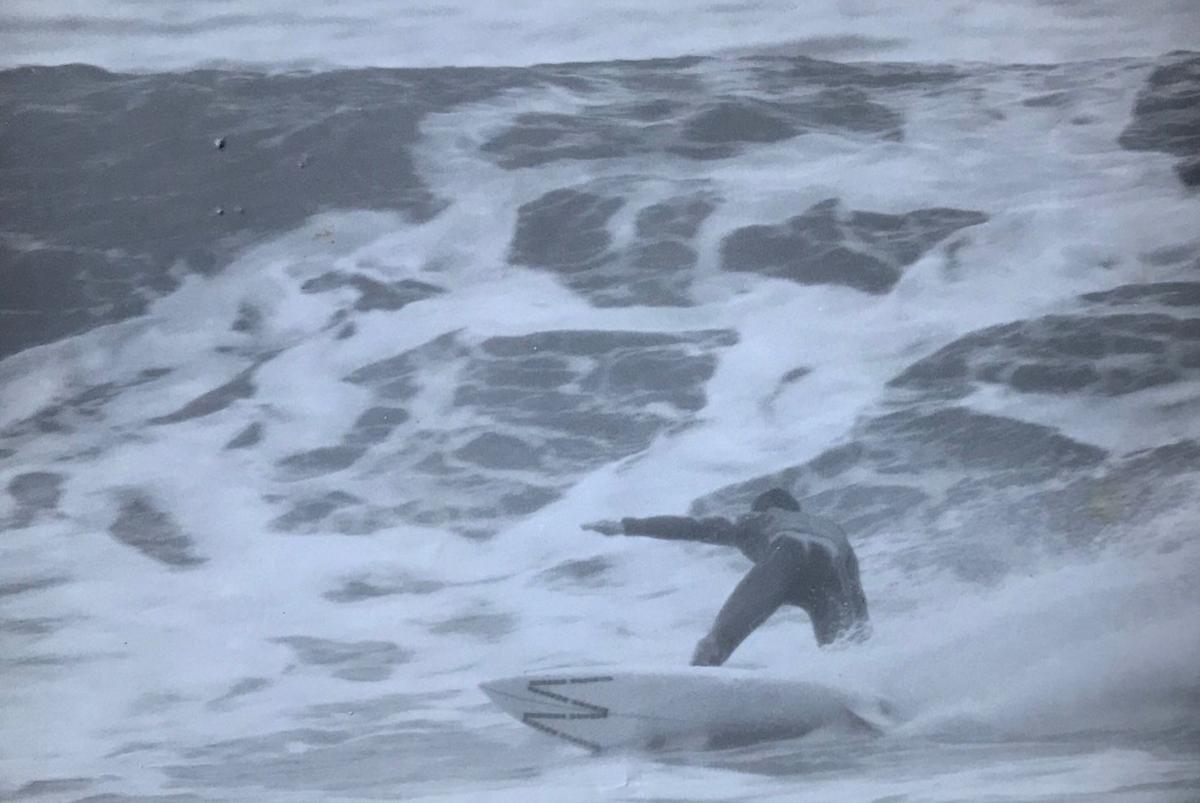 En route to first place in his age division in the Rincon Classic, Matt Moore buries his Twin Fin to the stringer, circa 1980.

A new wave of 80s- and 90s-era surfers benefitted from the Rincon Designs shop (shown here at the building that is now Esau’s) as well as Moore’s deep wave-riding experience and craftsmanship.

En route to first place in his age division in the Rincon Classic, Matt Moore buries his Twin Fin to the stringer, circa 1980.

Matt Moore caught the surfing bug early—early in terms of the sport’s evolution, and early in terms of his age (he was 8-years-old in the late ‘50s when he knew he wanted to be a surfer). It was the golden era of California wave riding, when the pioneer generation was working out the designs that laid the foundation for all the surfboard innovation that would follow.

In Carpinteria, Matt Moore was living with his mother and sister in the house in Concha Loma where he still lives today, and running across the train tracks down to the surf at Jellybowl. “We were completely addicted to the beach out the back here every day, all day,” he recalled on a recent afternoon. With “a fire on the beach (they had no wetsuits) and a spear, facemask, fishing pole or a surfboard—that’s what we did, weather depending...” Moore and his buddies put together the fundamentals that he would continue to hone over the following 60-years.

As a teenager, Moore was influenced by the surfboard designers and craftsmen who blew open the barriers to high-performance surfing: namely George Greenough from Montecito, whose short kneeboards and high-aspect-ratio fins provided surfers their first glimpses of radical turns and deep tube riding. Greenough’s circle included Michael Cundith, who started the venerable Wilderness Surfboards label in Santa Barbara and was living a few doors away from Moore in Concha Loma. Bob McTavish from Australia—another key figure in what would come to be known as the Shortboard Revolution in 1967—was visiting, and the three men were surfing out front at Jelly Bowl and, naturally, at the perfect design test track of Rincon.

The experience left its mark on Moore, who soon cut down the longboard he was riding, equipped the board with a Greenough “Stage Two” modern fin and became “the first kid on the beach with a short board.” Soon after, Moore jumped into shaping boards of his own, transforming the garage at his mother’s place to a surfboard factory. Travels to Hawaii provided further design influence via the narrow “mini-guns” developed by Dick Brewer that were particularly well suited to the powerful winter walls of Rincon. By the time he graduated from Carpinteria High School in 1970, Moore had a well-established surfboard business that continued to grow throughout the decade.

This background in surfing, and the following he developed, made moving to a retail location in downtown Carpinteria a natural progression. And what started as a place to shape and sell surfboards and a few T-shirts on Yucca Lane in 1980, became a full-blown surf shop—Rincon Designs—with an offering of top-tier clothing lines, wetsuits and skateboards a few years later at the building where Esau’s restaurant now stands. The late Jeff White—a longtime supporter of youth surfing in the area, and a well-known waterman across the state in dory racing—helped Moore make the transition to a larger retail concern, along with Roger Nance, who went on to start Surf ‘N Ware Beach House in Santa Barbara. Moore eventually bought out his partners and moved a few doors up to 659 Linden Ave., where he still operates today.

“I couldn’t have done any of it without help from my family and confidants,” Moore said of his years in business. “I’m a surfer, fisherman and artist,” he added, saying that the shop has been his way of staying in the life—making boards and surfing, running out to the Channel Islands aboard the Radon boat he re-built from the hull up, spending time on his land in the local mountains and painting the landscape.

While many surfers travel the globe looking for waves, Moore says his world is encompassed by the Santa Ynez Range leading out to Point Conception, then across to the islands and down to his beloved Rincon: “There’s all the adventure you could ever have, right here.” Rincon Designs reflects the region that formed it and its owner. An institution in Carpinteria, people show their affection for the town—whether they are born-and-bred locals, or part of a family that returns year after year to camp at the State Beach—by sporting a ball cap or a T-shirt with the Rincon Designs, or the double-M, logo of Matt Moore Surfboards.